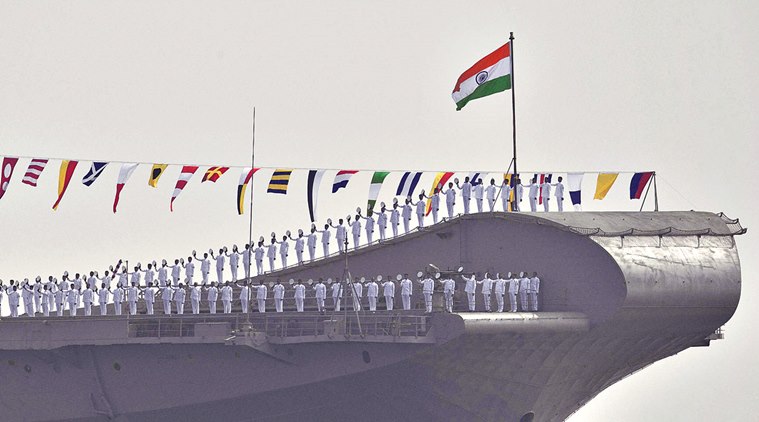 “India’s goal is to seek a climate of trust and transparency; respect for maritime rules and norms for all countries; sensitivity to each other’s interest; peaceful resolution in maritime issues; increase in maritime cooperation. We seek a future for Indian Ocean that lives up to the name of ‘SAGAR’ – Security and Growth for all in the Region.” – S. Jaishankar, Foreign Minister of India

India has a multi-millennial history of maritime influence across the Indian Ocean traversing culture, commerce and connectivity in a largely conflict-free journey. This influence has continued even post-independence, with the Indian Navy playing a key role in major military operations and disaster relief operations after 1947. The Swarnim Vijay Varsh (50th Anniversary) of Indian humanitarian intervention of 1971 led to the birth of the maritime nation of Bangladesh. It is apt to commemorate application of maritime power to usher peace and good order at sea.

Come another December and the season saw Indian Naval Ship Kiltan reach across to Vietnam and to Cambodia at the end of December 2020 to provide relief to flood-ravaged nations. Mission SAGAR III was a continuing testament to a long journey of India’s maritime assistance to usher peace and good order across the Indo-Pacific. The concept of SAGAR (Security and Growth for All in the Region) builds an effective response mechanism to address crises and disaster relief intervention as the most visible element in India’s evolving Indian Ocean strategy. It is time to commemorate by flagging some key waypoints in this voyage.

The Chola Naval Expedition and Gulf of Aden Deployment

India’s prowess in naval warfare can be traced to the pre-modern era Cholas Empire that ruled the southern part of ancient India (984-1042 CE). While Rajaraja Chola was the first king with a naval fleet, his successor Rajendra continued the expansion of the empire in the far East. The growing menace of piracy in the waters of Malacca and Singapore Straits were fuelled by littoral support and an abdication by the surrounding territories from intervening to curb acts of piracy. Rajaraja launched his expedition successfully to resume a peaceful use of the seas. It is perhaps a legacy of India’s pioneering initiative in 2008 to deploy naval ships into the Gulf of Aden to address the threat from Somali pirates collaboratively. 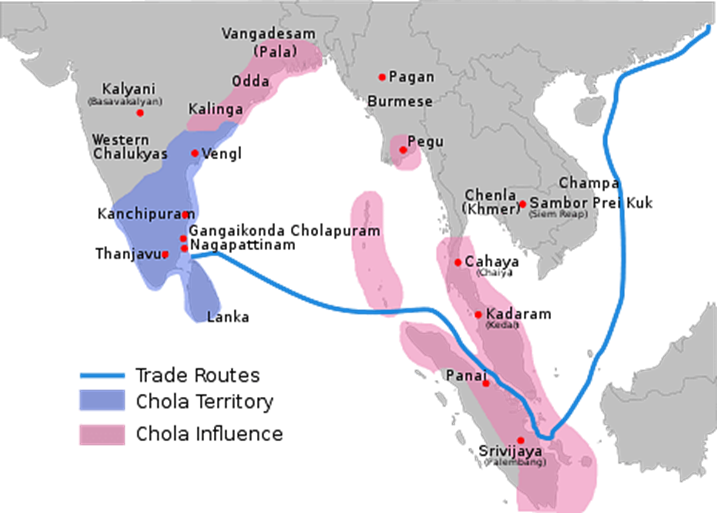 Map showing the extent of the Chola Empire at its peak and the sea trade routes.

Naval Power to Mitigate a Genocide

Every year 4 December is observed as the Indian Navy Day to commemorate the audacious attack on the Karachi Harbor by the Indian Naval missile boats during the 1971 Bangladesh liberation war. This was a humanitarian intervention in response to the brutal suppression of Bengali nationalist protests in the then East Pakistan, and genocide unleashed by Pakistan Military. The events that led to Bangladesh’s liberation in 1971 and role played by Indian Navy in it changed the course of subcontinent’s history.

Late Captain MNR Samant, MVC and Sandeep Unnithan have in their book “Operation X” showcased a series of operations done under the meticulous planning, direction and knowledge of the key planners, Admiral SM Nanda, the then Chief of Naval Staff, Captain MK Roy, the then Director of Naval Intelligence (later Vice Admiral) and with the express knowledge of the apex leadership. Innovative sabotage missions were classic deltaic and riverine naval operations that decisively swung the advantage to the suppressed locals with minimal losses.

‘Operation Jackpot’, under the direct stewardship of Samant, sank and damaged about 60,000 tonnes of shipping. Twenty-five ships were sunk in just one hour of operation on August 14, 1971. The action by the naval commandos supported by airborne strikes from the aircraft carrier INS Vikrant, impaired the transport of men and material across the strife-torn province using waterways but also scared away the foreign vessels bringing ammunition from Pakistan. 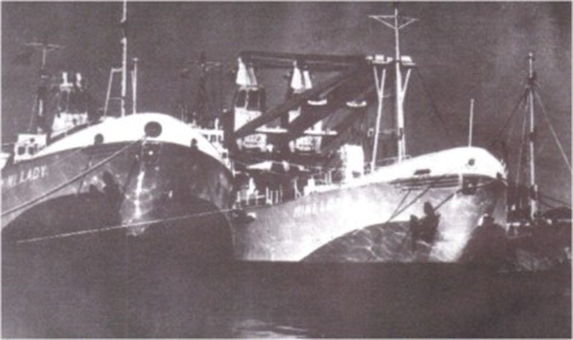 Indian Navy as the Instrument of Disaster Relief: Tsunami 2004

Navies in the postmodern era also deployed to address non-traditional threats and mitigate the effects of natural disasters. From anti-piracy to anti-trafficking, counter-terrorism and migration control, the scope of unconventional security tasks undertaken by maritime forces in recent years has expanded significantly. That intervention post the Indian Ocean tsunami in December 2004, saw Indian Navy undertake disaster relief missions at a regional scale despite the impact of the same across its coasts. It was a multi-national disaster which affected several countries including Indonesia, Sri Lanka, India, Thailand, Malaysia, and Myanmar amongst others and stretching across the ocean to the East Coast of Africa. 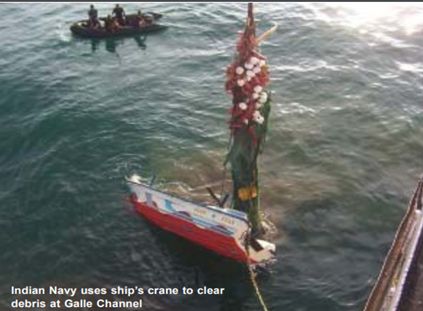 19 Indian naval ships conducted relief operations in Sri Lanka, Indonesia and the Maldives, the Indian Navy and Coast Guard have regularly participated in HADR (Humanitarian Assistance and Disaster Relief) missions in South Asia, West Asia and even the South China Sea, carrying out relief operations, search and rescue and emergency evacuations of people in need of urgent assistance. Indian Navy had registered its presence in the tsunami-affected region, as a compassionate power capable of aiding its neighbours even when its own shores were troubled.

In mid-2020, amidst the COVID-19 crisis, the proactive contribution of Indian Navy in the Vande Bharat Mission under the code name “Operation Samudra Setu” enabled significant segments of the Indian diaspora to return to the motherland during the height of the pandemic induced restrictions. Indian Navy reached out to provide assistance that mitigated a marine disaster in Mauritius and prevented a disaster off-Sri Lanka are significant milestones. The Japanese freighter ‘MV Wakashio’ ran aground on Mauritius’ coral reefs on 25 July 2020. It remained stuck and started breaking apart 13 days later on 6 August 2020, releasing 1000 of its estimated 4000 tonnes of heavy bunker fuel into the pristine waters of the Indian Ocean, as a large gash started appearing on the side of the vessel. 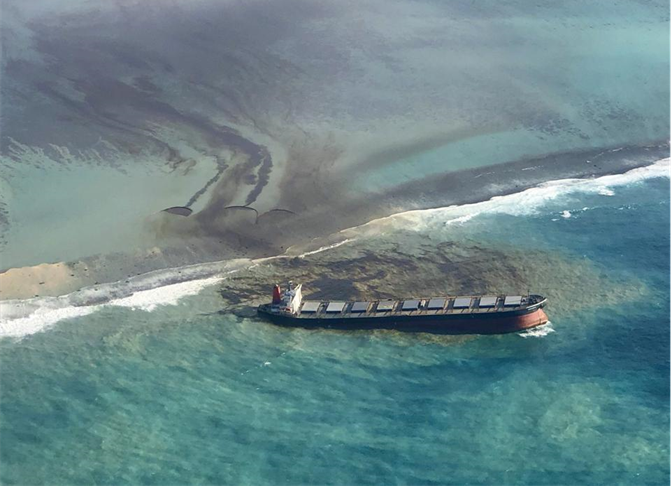 Indian Navy immediately rushed INS Nireekshak, a specialized diving support vessel, for assistance towards fighting the oil spill by removal of floating and submerged oil from the site near the Japanese Wakashio wreck. The ship also provided Seaward Security and Medical Cover off the incident site. 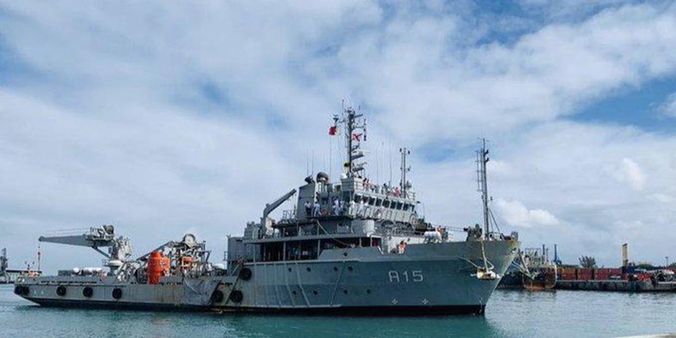 A few months later, the Indian Navy stepped up disaster relief response to douse fire onboard vessel MT New Diamond that occurred on 3 September 2020. Indian Navy, led by INS Sahyadri, initiated a multi-sectoral response to rescue the stranded crew and gain control of the fire that threatened a regional disaster. The urgent assistance reflected the close bonds of friendships maintained by India and its abiding commitment to be the ‘First New Responder of Urgency’.

Continuing with the pivotal role in providing disaster relief operations to the neighbouring countries, INS Kiltan under Mission SAGAR III arrived at Port Nharong, Ho Chi Minh City in Vietnam on 25 December 2020, and delivered 15 tonnes of HADR material for flood-affected people of Central Vietnam. A few days later the ship delivered 15 tonnes of flood relief material containing 3,000 relief kits at Sihanoukville port for the flood-affected people in Cambodia. This was reflective of enhancing and bolstering the bi-lateral maritime cooperation and reiterates India’s position as a dependable partner, and the Indian Navy as the ‘Preferred Security Partner’ and ‘First responder’.

Addressing non-traditional threats in the Indian Ocean Region (IOR) is one of Indian Navy’s most prominent roles. Over the past decade, higher instances of natural disasters and regional instabilities have necessitated the increased deployment of Indian Navy for undertaking Humanitarian Assistance and Disaster Relief (HADR), Non-Combatant Evacuation (NEO), and Search and Rescue (SAR) Operations. The Indian Navy continues to be at the forefront of HADR operations in coastal areas, both in India and in the maritime neighbourhood. The Indian Navy has demonstrated its capability in positioning itself as a “First Responder to Urgency” for the Indian Ocean littorals. By contributing its resources to prevent or mitigate regional or international crises, the Indian Navy continues to demonstrate not only its ability to sustain long deployments across the IOR but also strengthens ‘Collective Maritime Competence’ and shore up India’s credentials as a responsible power of significance in the global stage.