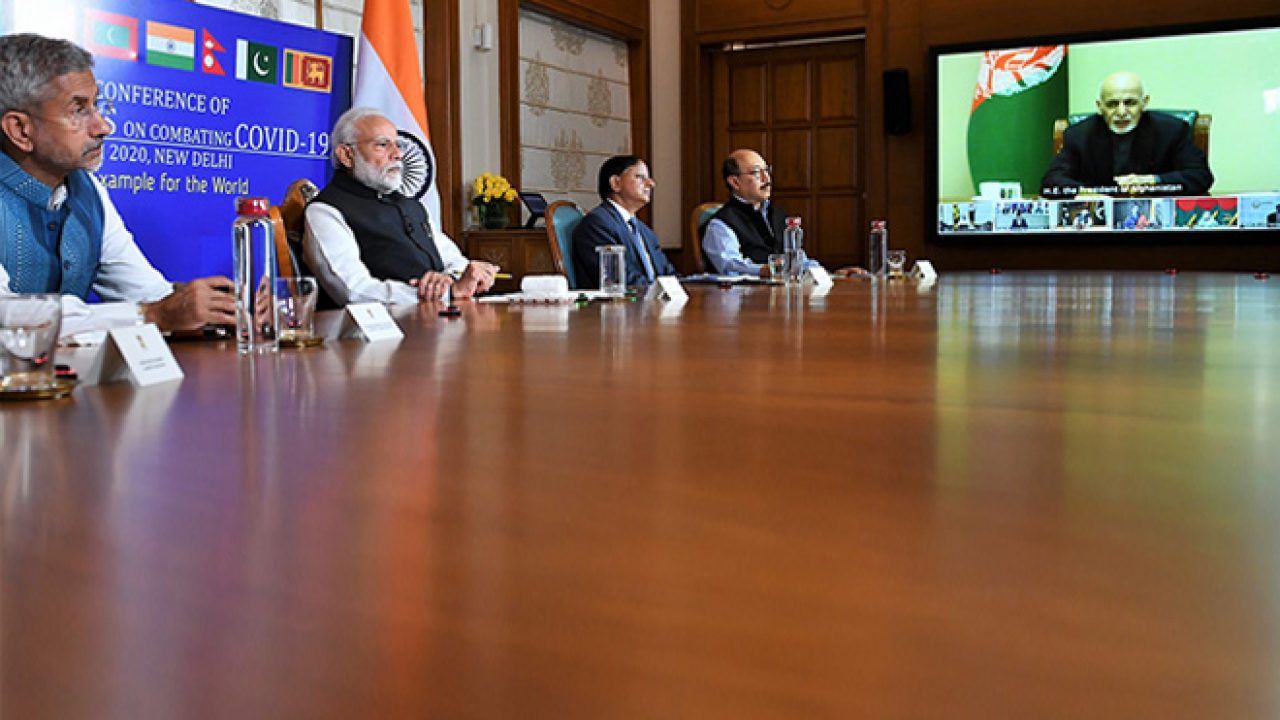 The Chinese have slipped in the battle for influence through the instrument of COVID-19 vaccine. Their narrow vision, constrained by overemphasis on economic gains, has lost out to an obvious Indian focus on humanitarian issues. The battle for influence in the region has witnessed tilting towards India, in the bargain. The author examines the response of a few of India’s neighbours.

South Asia has always faced a power struggle of influence between India and China. China, in its bid to consolidate its string of pearls, has sought to win over India’s neighbourhood through multiple means. It interfered directly in internal affairs of Nepal after investing in the country through the China-Nepal economic corridor (Trans-Himalayan Multi-Dimensional Connectivity Network), claimed Bhutanese territory, provided loans to Sri Lanka and Bangladesh, hoping to entrap them in a debt trap, and attempted to pressurise Myanmar to permit it to build unsustainable projects as part of the Belt and Road Initiative (BRI). It already has complete control over Pakistan and the Hambantota Port complex in Sri Lanka.

With the onset of COVID-19, China sought to further its influence in the region by attempting to provide medical support. It was beaten by India, when PM Modi announced in a video conference of all SAARC leaders the creation of a SAARC fund for supporting nations battling pandemic, with India making an initial investment of USD 10 million. It is this fund which is being utilised by India to provide succour to nations in the region. India has led the way in providing medicines, medical equipment and even medical support teams, where needed. The only country which was left out was Pakistan on account of it’s being unwilling to seek Indian aid.

The Chinese incursion in Ladakh initially placed India at a disadvantage in South Asia. Nations in the subcontinent began drifting, visualising India being put on the back foot and forced to accept Chinese terms. The stalemate which followed and the counterstroke by India South of Pangong Tso changed the texture of South Asian nations’ response. These countries realised that India would stand up to China and hold its ground. The change in their attitudes is pretty much on display.

Nepal began warning the Chinese to stay away from its internal matters, an insult which China sought to cover up. The Nepalese foreign minister visited India to resolve differences. Bangladesh blocked the visit of the Chinese defence minister to their country, forcing him to visit Pakistan, in lieu. Sri Lanka is reconsidering awarding the stalled contract for the East Container Terminal project to a Japanese-Indian consortium.

The latest issue in the battle between India and China for influence in South Asia is on the COVID-19 vaccine. The vaccines in contention between India and China are Oxford-AstraZeneca Covishield vaccine being manufactured by the Serum Institute in Pune, Coronavac from China and Covaxin, also an Indian product. While both, Covishield and Covaxin have high reliability, while Coronavac has been judged to have just 50.4 per cent efficacy. India has the largest global vaccine production capacity, currently producing 60 per cent of all global vaccines.

India has despatched COVID vaccines selflessly to neighbouring countries. It sent its first consignment of 1.5 lakh dosages of Covishield vaccine to Bhutan and 1 lakh dosages to the Maldives. It has also provided vaccines to Bangladesh, Nepal, Myanmar and Seychelles. In some cases, India is awaiting clearance of the vaccines by respective country medical authorities.

The gratitude it has received has been immense. Maldives President, Ibrahim Solih tweeted, ‘Maldives thanks India for providing COVID-19 vaccines.’ Bangladesh PM Sheikh Hasina tweeted, ‘I thank Prime Minister Narendra Modi for sending the vaccine (batch) as a gift.’ Nepalese PM Oli stated, ‘I thank Prime Minister Shri @narendramodi ji as well as the Government and people of India for the generous grant of one million doses of COVID vaccine to Nepal at this critical time when India is rolling out vaccination for its own people.’

The world also appreciated Indian generosity. The US Bureau for South and Central Asian Affairs tweeted, ‘We applaud India’s role in global health, sharing millions of doses of COVID-19 vaccine in South Asia. India’s free shipments of vaccine began w/Maldives, Bhutan, Bangladesh & Nepal & will extend to others. India’s a true friend using its pharma to help the global community.’

China, on the other hand, had asked nations to contribute towards the development cost of the vaccine in case they desired free vaccines manufactured by its Sinovac Biotech. Nations like Bangladesh refused to do so, preferring the Indian product. A Bangladesh health official stated, ‘India is making the AstraZeneca vaccine which makes all the difference. It can be stored and transported at normal refrigerated temperatures and countries like Bangladesh have that facility.’

Indian actions were far faster and more generous than China had planned to be. In an article in The Chinese Global Times of 22 January, titled, ‘Indians in China embrace Chinese COVID-19 vaccines,’ China attempted to defend its vaccine and criticize Indian products. The article stated, ‘The Indian community in China is positively embracing Chinese developed COVID-19 vaccines, despite some international rumours and disputes about Chinese vaccines.’ It added, ‘Back in India, by contrast, people reportedly respond coldly to the India-developed Covaxin vaccines.’

With the region continuing under the grip of the virus, nations which provide succour to those in difficulty establish their credentials as a trusted ally. This is more pronounced when it’s done without considerations of geopolitical harvests, exclusively. Vaccine manufacture globally has been an Indian forte; while investments in infrastructure projects at high-interest rates is Chinese policy. India, therefore, took benefit of its high production capacity of vaccines to offset the Chinese advantage of the investment. When these two scenarios are compared, providing support where lives are being lost yields greater diplomatic leverage than providing investments at high-interest rates. No wonder the Chinese are peeved.

The Global Times in an article of 21 January, projected the Chinese frustration, stating, ‘Choosing Nepal, Bangladesh, and Sri Lanka among the first batch of countries to receive COVID-19 vaccines shows India’s mentality of competition with China… Such an order of vaccine provisions is based on the consideration of India’s interests and political influence. If India provides free vaccine, its image in these countries will improve.’ The same article adds, ‘In particular, if India continues to act hostile against China, it will have to undergo an increasingly unfavourable outside environment.’

India is planning to gift anything between 12 to 20 million doses of vaccines to the neighbourhood and other friendly nations. India is also helping with the training of health workers in some of these countries and the setting up of infrastructure to administer the shots. Simplistically put, India is exploiting its strengths to gain an upper hand over China in a region which is of immense strategic importance to it. China, on the contrary, has realised that it has lost the battle of vaccines to India and will now seek another field to challenge India.