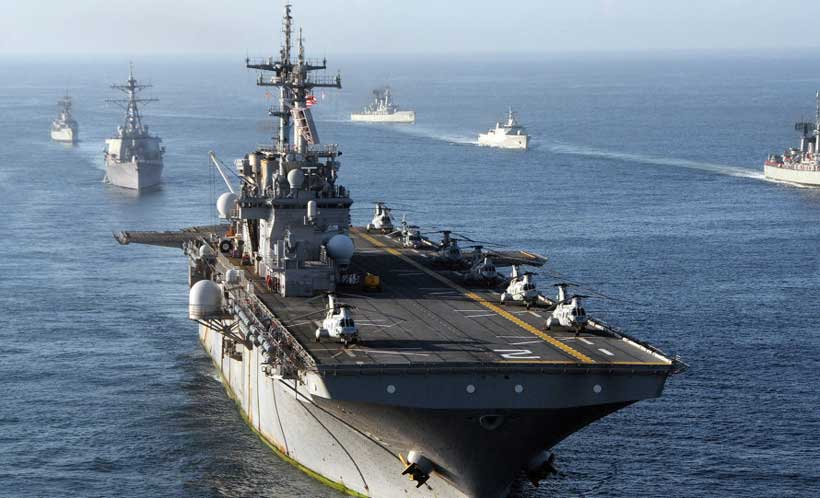 According to the 2020 China Military Power Report by the Department of Defence, USA, the Chinese Navy (PLAN) is today the largest Navy, globally. If its likely future trajectory is to be analysed, it’s going in for an Indian Ocean fleet, to keep its logistics lifeline through the Indian Ocean, open and safe. In fact, the capability to keep this vital artery open is a requirement that closely influences any substantial operations it can attempt across the Taiwan Straits.

In the Indian Ocean, it routinely maintains a presence of six to eight warships, ostensibly for anti-piracy tasks. Apart from warships, Chinese survey ships scouting the depths of the Indian Ocean have been common. Naval News reported in January 2021 of Chinese ships undertaking sea bed mapping, useful for submarine operations, These ships have also been deploying submersible Sea Wing gliders to map the ocean bed.

Other media reports state that four to five Chinese hydrographic ships are always out in IOR to find the best operational routes for their underwater assets. Chinese submarines have also been traversing in the northern Indian Ocean. They have made port calls in Pakistan and Sri Lanka in the past.

It would be prudent to also take stock of Chinese bases and control over strategic ports along with the Chinese concept of the Maritime Silk Road. Writing in the context of Chinese investment and control on strategic ports in her book ‘Balochistan In the Crosshairs of History’, Sandhya Jain includes the ports of Melaka Gateway on Malacca Straits, Port of Tanjun Priok, Sunda Strait, Indonesia. Other ports listed by Jain include Kuantan, Malaysia; Kyaukpyu, Myanmar; Jakarta and Batam Island, Indonesia; Colombo and Hambantota, Sri Lanka; Gwadar, Pakistan; Djibouti; Mombasa, Kenya; and Piraeus, Greece. According to the Edge Markets, Malaysian edition of 17 July 2017, the Chinese have also invested in the Malaysian ports of Kuala Linggi and Penang. They have leased 17 Maldivian islands and are building a marine observatory also.

Notwithstanding the Chinese preparation for an Indian Ocean fleet to operate in the IOR, there have been enough exercises conducted in the IOR by the Indians and Navies of countries with whom India has stronger bonds in the works. While the fact of the Indian Ocean not being India’s ocean is acknowledged, India remains the best pivot for stability, west of Malacca Straits. A few such naval exercises provide strong indicators of a growing coalition of powers to contest unabated Chinese aggressive manoeuvres.

In July 2020 the USS Nimitz Carrier Strike Group was in the South China Sea along with the USS Ronald Reagan Carrier Strike Group. The two US Strike Groups exercised jointly in the South China Sea (SCS). Thereafter, Nimitz led its ships through the Malacca Straits into the area of Andaman & Nicobar Islands. By this time, the Indians had lost 20 men in Eastern Ladakh, while assessments of Chinese casualties ranged between 40 and over 100. The two navies exercising together was definitely an audible signal for the Chinese in Eastern Ladakh.
Off the A&N Islands, Nimitz was joined by four ships of the Indian Navy (IN) to conduct what’s generally termed as a passage exercise (PASSEX). PASSEX are common, especially with COVID 19 raging across the globe, inhibiting major exercises.
A month before the PASSEX with the Nimitz Group, the IN had conducted a similar exercise with the Japanese (a Quad partner) in June 2020. A destroyer and a Missile Corvette of the IN and two Japanese ships were involved in that exercise.

Exercise Indra Navy 2020 was run from 4 to 5 September with the Russians. The platforms that concentrated in the Bay of Bengal included Indian ships Ranvijay and Sahyadri, along with a fleet tanker, while the Russian fielded two destroyers and a logistics ship.

The most important exercise held in the IOR in the last six months is of course the Malabar 2020. Australia participated in the exercise after 13 years. The exercise also had its regular participants – the US and Japan, with India as the host. The exercise was conducted in two parts, the first being in the Bay of Bengal from 3 to 6 November 2020, and the final phase in the Arabian Sea from 17 to 20 November.
Phase I was more a run-up to the more extensive and complex Phase II. In Phase I the US, Australia and Japan, each fielded a destroyer with integral helicopter resources, while India deployed one destroyer, frigate, a fleet support ship, patrol vessel and submarine in each category. Besides, Indians also brought into play their long-range maritime patrol assets to include P8I and Dorniers, and Hawk trainers.

In Phase II Indians fielded the Vikramaditya Carrier Battle Group, while the American participation was based on the Nimitz Carrier Strike Group along with a destroyer and frigate and submarine, each. The Australian and Japanese participation remained by and large the same as in the previous phase.

In addition to dual carrier and submarine operations, the exercise involved weapon firing, fielding of reconnaissance resources, sharing maritime picture and a host of processes to better interoperability of the navies concerned on high seas.

The Chinese immediately identified the exercise as an extension of Quad, directed at them. The fact remains that the constituents of Quad and participants of Malabar remain common. Chinese external affairs ministry officials have in the past called the Quad ‘A clique’, and also a ‘pillar of an Asian NATO’.

IN kicked off its 2021 schedule with the Theatre Level Operational Readiness Exercise (TROPEX 21) in January. These are biennial exercises that test the IN and also other organisations involved in keeping the Indian coastline and the seas beyond, safe. The exercise proceeded in phases with an initial attempt to judge the capabilities of our coastal defence through Exercise Sea Vigil. The Coast Guard, Marine Police of 13 states and union territories among other establishments, were brought into the ambit of the exercise.

Sea Vigil was followed by AMPHEX 21 from 21 to 25 January, an amphibious exercise involving all three services to test our capabilities to safeguard our large island groups. Finally, the Weapon work up phase involving delivery from aerial, surface and underwater platforms was undertaken to validate our capabilities for long-range strikes in the IOR.

The US Navy Aircraft Carrier Roosevelt carried out a PASSEX with the Indian Navy ship INS Shivalik in the Bay of Bengal. The IN (Indian Navy) also deployed its Long Range Maritime Reconnaissance P81. Elements of the IAF also participated in the exercise to enhance interoperability with the US fleet.

IN’s April calendar has a lot to make it a busy schedule. Indian Navy participated in La Perouse a French naval war game “The exercise was conducted from 5 to 7 April in the Bay of Bengal. It also had the Quad countries in it. The French participation included the amphibious ship Tonnerre and the Frigate Surcorf. IN fielded INS Satpura and INS Kiltan along with P8I Long Range Maritime Patrol Aircrafts. The Australians had the HMAS Aanzac, a destroyer and Sirius, a tanker. The Japanese representation was by the destroyer Akebano and its onboard helicopters.

On 25 April 2021, ships of the UAE will, for the first time, join Indian and French ships in an exercise near the Persian Gulf. Exercise Varuna is otherwise an annual feature between the IN & French Navy, The French Navy will be deploying its Aircraft Carrier, Charles de Gaulle, along with two frigates and a replenishment tanker. India’s only aircraft carrier is currently into periodic refit, however, it will compensate with its destroyers, frigates, and an attack submarine in addition to Maritime patrol and reconnaissance assets. UAE does not have an aircraft carrier. Charles de Gaulle is already in the Arabian Sea and has exercised with the American Super Carrier Dwight D Eisenhower.

Most of France’s EEZ is in the Indian Ocean with France having territories in the Southern Indian Ocean. The French have also been major partners in building Indian submarines. They were also one of the first to post an observer at the Indian Ocean Region Information Fusion Centre established by India. The participation of all members of Quad in a French naval exercise in the Indian Ocean is important with the debate on Quad plus gaining momentum. France and India, and so also the other Quad member, have common interests in the Indian Ocean. The two countries signed a logistics agreement in 2018. The two navies jointly patrolled off the Coast of Reunion Island in March 2020.

China’s surging territorial claims in the South China Sea has acted as a catalyst for both India and major global powers to coalesce their capabilities in the Indian Ocean. The Indian race to be the net security provider in the Indian Ocean is on. To increase its reach and sustenance in the waters, India has logistics arrangements/ agreements with Oman (Duqm), Iran (Chabahar), Madagascar, Mauritius, and Singapore. India also conducts joint coordinated patrolling, and EEZ surveillance with some South and Southeast Asian countries. It’s modernising the Navy and is into accretion of its surface, sub-surface and aerial platforms while preparing for attacks in the cyber and space domains. The Indian role in this region is critical for keeping the sea lanes safe and open. India has a definite edge over China, given its geography and relationships with major western maritime powers. However, the budget allocation for the Indian Navy holds the nation back from being a net security provider in the Indian Ocean region.

The Chinese have to be halted, if not pushed back, in the South China Sea, and if it gets hot enough there, operations in the Indian Ocean would turn out to be a pivotal factor