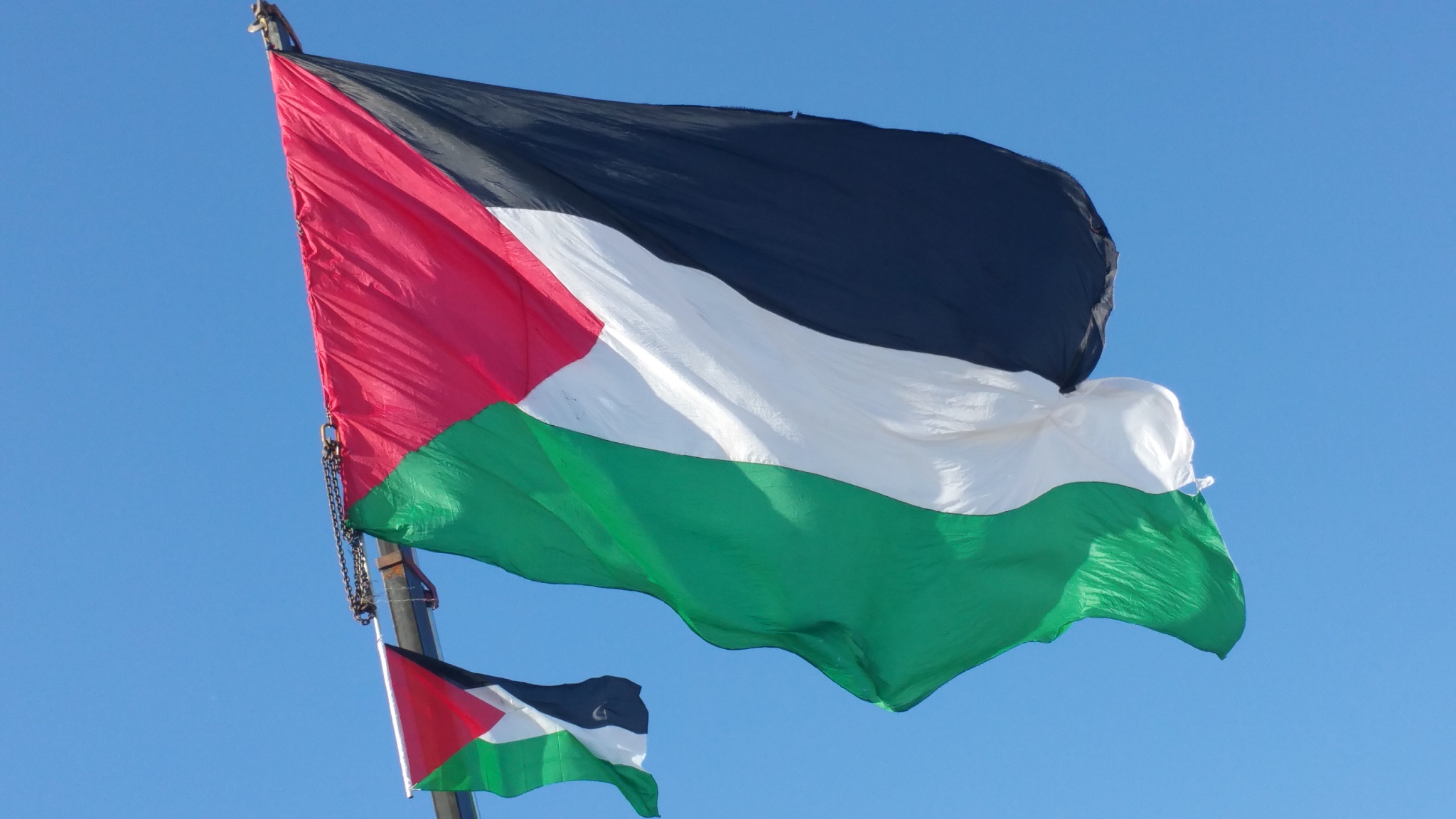 The issues that ignited Palestine and fuelled the fires for decades remain unaddressed in a new framework of geopolitical relationships. However, what’s really happened to the issue of addressing the aspirations of those who spent a lifetime fighting for what seems to be an illusion today? Will the embers reignite a fire.
………………………………………………………………………………………………………………………

The Future First: The Two-Nation Solution is Dead
This is a geopolitical, strategic narrative on Israel and Palestine, and does not focus on operational security imperatives. Long standing perceptions of Israel (and her supporters, mainly USA) that military victory and deterrence would force Arab hands, but require no concessions by Israel is being tested. Israel has cultivated a culture of profound mistrust of adversaries shaped by the legacy of the holocaust, and US indulgence of Israeli anxieties, which encouraged belligerence and discouraged compromise. It is obvious to ALL, even the blind that the two-state formula is a forgotten chimera; an illusion from inception.

The continuing expansive ambitions of Israeli leadership, the corresponding decay of vision and dynamism among the Palestinians, and the ‘Own Nation first’ geo-political trend even amongst global powers, makes it extremely difficult to forecast/comprehend the way forward. Increasingly, Israel is unlikely to accommodate Palestinian expectations of sovereignty.

Current Middle East Geo-Political Situation
The Middle East today is unrecognizable from three decades ago. The pan-Arab call for a united front against Israel “from the Atlantic Ocean to the Arabian Gulf” has given way to normalisation at an unprecedented pace, across that same expanse. Egypt and Jordan have been at peace with Israel for decades. Over the past several months, Bahrain, UAE, Sudan, and Morocco have normalised relations with Israel. Oman is on its home-run, and Saudi Arabia has taken unprecedented steps in that direction. All Arab governments maintain important, albeit discreet ties with Israel, and normalisation appears to be only a matter of time.

Insistence on “land for peace” and normal ties in return for a full Israeli withdrawal to the 1967 lines have been shed, and self-interest is the buzz word. However, while intra-state conflicts have ended, Israel’s conflict with the Palestinians has not. Till thirteen million Palestinians continue to live across the Holy Land and in exile (of which seven million reside between the Jordan River and the Mediterranean), the conflict/trouble spot will fester and rise and flow based on geopolitical events.

Israel’s Hardening Stance
Israel is aggressively accessing new lands and building colonies. The current geopolitical realities provide little incentive for Israel to make concessions to Palestinians. A mix of unprecedented Arab dealings aligned to Israel; Palestinian frustration worsened by poor strategic leadership bereft of ideas and heft and most importantly cohesion; increasing domination of right-wingers in Israel; are shifting the sands of hubris (both sides). History shows that peace with Arab nations does not automatically lead to a rapprochement between Israel and Palestinians. As a matter of fact, the current Palestinian national movement emerged precisely from the sense of defeat, solitude, and abandonment by Arab governments that followed 1948.

The Palestinian Reality and Dilemma: An Overview

The Arafat Era and After

In actuality, Arab Nations never displayed any cohesion towards Palestine apart from empty rhetoric. Realising this, the Palestine Liberation Organisation (PLO formed 1966) under Arafat (from 1969) succeeded in bringing Palestinians together, asserting a separate Palestinian political identity, forcing its cause onto the international agenda, and returning some Palestinians to self-rule. But it failed to end the conflict to establish an independent and sovereign state or develop good governance for Palestinians.

The PLO and Palestinians made life difficult for themselves (to be fair their choices have always been between a rock and a hard place) when they recognised Israel in 1988 and embarked on a “peace process”. It established security coordination with Israel, undercutting their ability to object when other nations establish security relationships of their own. Nor can they insist that their plight is the central Arab cause, but only PLO has the right to address it. Palestinian diplomacy failed Palestine, and the PLO has lost all credibility as decision-making or representative body, externally and internally. With the decline of PLO, Palestine’s ‘centre of gravity and national ‘one voice’ for strategic objectives was also lost.

The West Bank and Gaza Strip
The Palestinian Authority (Fatah) governs the West Bank and Hamas (since 2007) the Gaza Strip. They hold the geopolitical keys and not PLO (read Palestinian Territories in Wikipedia, for elaboration). A strategic mistake since PLO (or revitalised successor) should continue political leadership leaving the administration to PA. The current arrangement causes both ambiguity and dissension. Besides, the 1993 Oslo Agreement, unfortunately, cut off/side-lined the substantial Palestinian diaspora who reside outside the West Bank and Gaza Strip (substantial numbers in Israel), since it did not address their cultural, economic, welfare and future aspirations.

Palestine’s Hobson’s choice: Prisoners of their own Discourse
It is a tragic reality, that three decades of endless negotiations have led nowhere, with each new (US/ Israel) dispensation, starting more negotiations in the vain hope that this time it may be different; that some new framework and passage of time will yield the achievement of previously unachievable goals. Each credible “peace” formula ends up being a regression, offering less to the Palestinians than the one before. The harsh reality is that the Palestinians were compelled (for lack of an option) to accept statehood over part of their ancient land.

Ironically, as introspection reveals, Palestinians made their most significant concessions before the final deal, and have little left to give in talks. They are in a position of no salvation, which makes true negotiations impossible; prisoners of their own discourse, reasserting the same points to no end. This makes them look inflexible and intransigent.

Enduring Delusions and Challenges
The Palestinians always depended on international law and hoped that the international community can or will act on its behalf. Realpolitik has made it an enduring delusion. In reality, international law has not been a dependable friend to the Palestinians: Balfour Declaration in 1917; UN Partition Plan in 1947; UN Security Council Resolution 242 in 1967 (the cornerstone of the peace process). International law has made a difference only when the outside forces that purport to uphold it, especially the UN Security Council are prepared to do so. Absorption of Arab East Jerusalem into Israel, US recognition of Israeli sovereignty in the Golan Heights, de-facto annexation of much of what remains of Palestinian lands showcase otherwise.
The conflict was never bilateral between Palestine and Israel. The West Bank’s (and Jerusalem) future is interlinked with Jordan and the Gaza Strip with Egypt.

Gaza and West Bank are deeply divided politically, creating increasingly insular and rival bubbles of Hamas-controlled Gaza and PA (Fatah)-governed Ramallah. The schism is more problematic than the Israeli-Palestinian divide.
Most experts predict an extension of the status quo; uncertain and unexpected consequences; slow absorption of Palestinians into the Israeli political orbit; consolidation of a one-state reality with no separation between Arabs and Jews in the Holy Land. For some, this may bring peace and for some existential realities.

India and the Palestine Cause
India has consistently supported the two-state solution. Upcoming months will witness government formation in Israel and elections in Palestine (first Palestinian elections in 15 years during May 2021). Using this change as a platform, India has urged the international community, Israel and Palestine for “meaningful negotiations” for achieving a peaceful solution to the dispute and has offered its considerable geopolitical soft power to take the process forward.

The Way Forward
Palestinians need a new approach: one founded on a reconsidered strategic vision (including sovereignty) and recalibrated aspirations.
The West Bank-Gaza divide has to be bridged and a ‘one umbrella’ organisation created, to achieve interim gains while exploring new possibilities for advancing their long-term goal of their state. The normalisation deals between Israel and Arab countries will offer opportunities that could be leveraged to Palestinian advantage.
As long as the Palestinians do not lose, Israel cannot win. Palestinians need to rebuild links to European, Latin American, African and other foreign solidarity movements.
The key: “Win Jewish support for justice and freedom of Palestine”. Jews have been the biggest victims of anti-Semitism, apartheid and racism.
Influential players to include India to create a favourable international geopolitical climate to induce a softer, more inclusive Israeli approach.

Epilogue
As long as the Palestinians are neither pacified nor fairly accommodated, their cause will continue to burn, and the prospects for genuine peace and stability will remain elusive. Meanwhile, the world occasionally wakes up to stir the hornets’ nest!
Lt Gen PR Kumar (Retd)