India is accelerating its border infrastructure projects to build roads and bridges and enable easier movement of troops and heavy equipment as it confronts the new strategic reality of a more hostile China and a heavily militarized border. The government is also focused on the speedy development of the border regions by constructing vital infrastructure. The pressing need to enhance combat efficiency and operational logistics, along with boosting the economy of Indian border areas, has spurred the government to raise the budget for border infrastructure to include roads, rail, bridges, tracks and a wide variety of related projects.

On28 December, Defence Minister Rajnath Singh inaugurated three roads and 24 bridges, mostly built to ease access to the Indo-Tibet border. The Ladakh’s Chisumle-Demchok Road is today the world’s highest motorable road. The road passes through Umling La Pass. The road spans 52 km and connects some of the key areas in the region. It has made its way to the Guinness Book of World Records by traversing across heights at an altitude of 19,000 feet.

The road connects the towns in the Chumar sector of Eastern Ladakh, providing a direct route between Chisumle and Demchok from Leh. It’ s higher than the Everest Base Camp. At the pass, the road is higher than both the base camps for the climb to Mount Everest, the world’s highest mountain. The South Base Camp in Nepal is at a height of 17,598 feet, while North Base Camp in Tibet is at 16,900 feet. The Chisumle-Demchok road is also higher than the Siachen Glacier, which is 17,700 feet. 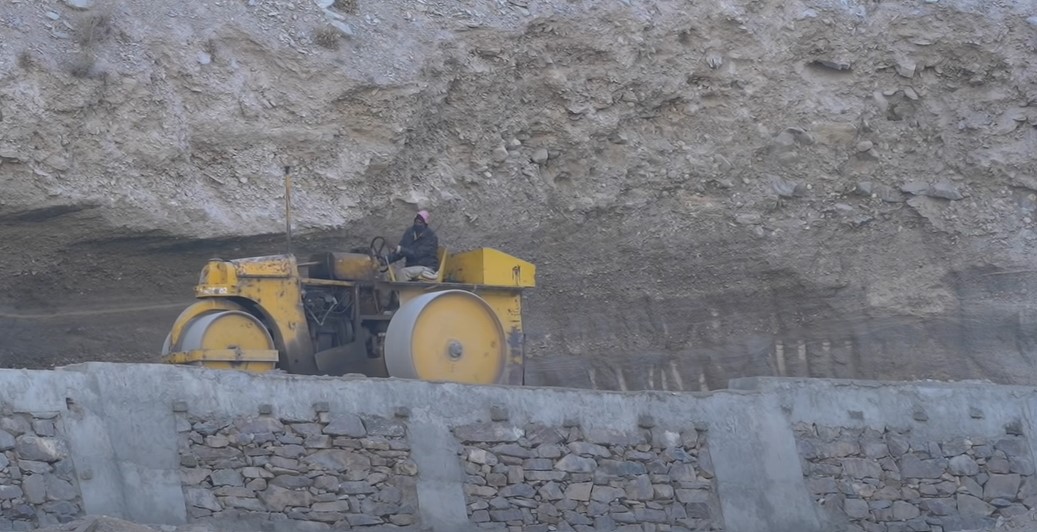 Demchok has been an India-China flashpoint earlier; the site of a standoff between the two armies in 2016. In the current standoff in Eastern Ladakh, which began in May 2020, Demchok has become a bone of contention. With the axis now complete, it provides a direct route from Chisumle, which lies on the major road coming from Leh, Karu and Nyoma; all of them being important military stations.

Another highlight was the inauguration of India’s first indigenous Class 70, 140-feet Double-Lane Modular Bridge, built at a height of 11,000 feet at Flag Hill, Dokala, in Sikkim. It provides an alternate axis to the Trijunction of India-China-Bhutan near the Dokalam plateau. The plateau was the site of the over-70-day standoff between India and China in 2017. The new axis will be helpful for the armed forces, making it easier to mobilise troops and equipment.

In June last year, 12 roads and 63 bridges – totaling 75 projects – across six states and two union territories along the Line of Actual Control (LAC) became operational. According to the Ministry of Defence (MoD), 2021 witnessed a record by Border Roads Organization (BRO), which completed 102 projects in the year. Most of these projects are near India’s international borders, with the majority being close to the India-China border.

These roads, highways, tunnels and bridges connect remote border areas to the mainland despite challenges posed by inhospitable terrain, inclement weather and the COVID-19 pandemic. These projects, such as the world’s longest highway tunnel above 10,000 feet – Atal Tunnel – connecting Manali to Lahaul-Spiti Valley provide for connectivity throughout the year. Similar payoffs are from the Kailash Mansarovar Road- connecting Line of Actual Control (LAC) in Uttarakhand and opening a new route via Lipulekh Pass along Indo-China borders, and improving the Zojila Pass tunnel between Kashmir Valley and Ladakh region.  The BRO completed 50 bridges including six in Jammu and Kashmir in the year 2020.

China has been enhancing roads and military infrastructure like airstrips, helipads, bridges and roads, all along its border with India as they want to ensure speedy movement of formations. India, for decades, had adopted the strategy that dearth of roads on its side impeding accessibility to the enemy from deeper penetration across the borders. It is only in the last few years that the Indian approach changed. Post the Galwan clash in June 2020, the pace of Indian border infrastructure development has been fast-tracked.

The government informed the Parliament last year in July that it has identified 73 critical roads totalling 4,203 km for development along the India-China border. These projects are being accorded the highest priority with dedicated funding. Of these, 61 have been entrusted to the BRO. Most of the projects have been completed and the remaining are in various stages of completion. The completion schedule has been extended to 2022.

In 2019, the Parliamentary Standing Committee on Defence in its appraisal report observed that since 2007-08, the targets set for various construction works by BRO could not be achieved. The failure to achieve targets was attributed to various issues faced by BRO such as difficult terrain, limited working period, and lack of raw material. The Committee noted that BRO was not in a position to perform in the field as there was inadequate delegation of powers and cases kept coming to the Defence Ministry. However, the delegation of financial and administrative power have now been increased significantly. In May 2020, the government implemented the Shekatkar Committee recommendations regarding border infrastructure that enhanced the BRO’s procurement powers from Rs 7.5 crore to Rs 100 crore. This has allowed BRO to acquire critical equipment for speedier laying of border roads and other construction works.

Strong infrastructure in border areas is essential in today’s uncertain times as it strengthens strategic capabilities. Better border connectivity bolsters surveillance and aids in dealing with problems of infiltration, skirmishes, illegal trade and smuggling, that’s often the case in these areas. To combat these problems, the government has initiated the Comprehensive Integrated Border Management System. However, India still has a lot of catching up to do as it has been rather late in starting. Further, there is the issue of the terrain being more mountainous on the Indian side, whereas Tibet is a plateau. Moreover, China’s budget for similar activities far exceeds the Indian commitment.