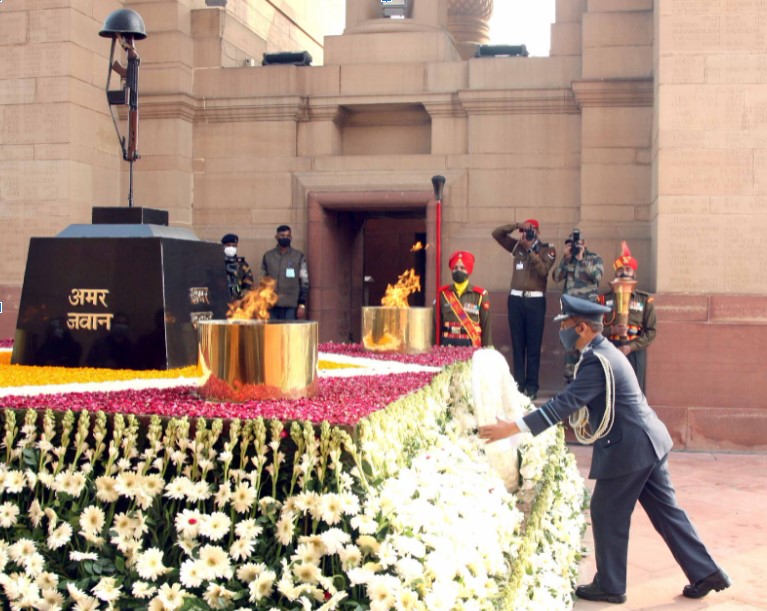 The Amar Jawan Jyoti – eternal flame – for martyred Indian soldiers at the India Gate was merged with the flame at the National War Memorial (NWM), instituted in 2019. The flame was taken from India Gate on Friday ahead of the Republic Day, by a ceremonial guard to the new memorial around 400 meters away on the other side of India Gate, in the national capital. The ceremony was presided over by Air Marshal BR Krishna, Chief of Integrated Defence Staff to the Chairman Chiefs of Staff Committee (CISC).

The Amar Jawan Jyoti, which has been burning for more than fifty years was an iconic symbol of the nation’s tribute to the soldiers who have died for the country in various wars and conflicts, and has inspired generations of Indians. It was established in 1972 to mark India’s victory over Pakistan in the 1971 War, which resulted in the creation of Bangladesh. The then Prime Minister Indira Gandhi had inaugurated it on Republic Day 1972.

All India War Memorial, as it was known earlier, located in the India Gate Complex, was built by the British in 1931 in memory of Indian soldiers who died fighting for the British Raj. It was erected as a memorial to around 90,000 Indian soldiers of the British Indian Army, and names of more than 13,000 dead soldiers were mentioned on the memorial. As it was a memorial for the Indian soldiers killed in wars, the Amar Jawan Jyoti – the eternal flame – was established underneath it by the government in 1972 after India defeated Pakistan in December 1971.

Though the flame at Amar Jawan Jyoti paid tributes to the martyrs of 1971 and other wars, however, none of the names who made that supreme sacrifice for the country was inscribed there.

The National War Memorial, spread over 40 acres, was built at a cost of Rs. 176 crore inscribed the names of all the soldiers who have laid down their lives in the various battles, and conflicts of Independent India. Even the latest names of soldiers who lost lives to the Galwan Valley clash with the Chinese PLA and those in the counter-terrorist operations are also included on the walls of the memorial. There are many memorials for such soldiers spread all over the country but none of them has the names each one of those warriors under one complex. Discussions to build such a memorial had been ongoing since 1961, but it did not come up. In 2015, the Modi-led government approved its construction.

The then Chief of Integrated Defence Staff Lt Gen Satish Dua who steered the design selection and construction of NWM took to Twitter and wrote, “India Gate is a memorial to the fallen heroes of First World War. The Amar Jawan Jyoti was added in 1972 as we did not have another memorial. National War Memorial pays homage to the fallen Bravehearts after independence. All homage ceremonies has shifted to NWM already”.

But critics, including opposition parties, call it an attempt to erase history and build a brand around monuments built by Prime Minister Narendra Modi’s government. Several reasons are being put forward by officials. Since the political controversy broke out, government sources have said a “lot of misinformation” was circulating and that the flame at India Gate paid homage only to the martyrs of the 1971 war.

“The flame of the Amar Jawan Jyoti is not being extinguished. It is being merged with the flame at the National War Memorial. It was an odd thing to see that the flame at Amar Jawan Jyoti paid homage to the martyrs of the 1971 and other wars but none of their names is present there,” said government sources.

The names inscribed on the India Gate are of those who fought for the British in World War-I and the Anglo-Afghan War, said the government, describing it as “a symbol of our colonial past”.

The names of Indian soldiers who died in wars after Independence, including the 1971 war, are engraved at the National War Memorial, said the government. “It is a true shraddhanjali (tribute) to have the flame paying tribute to martyrs there,” said sources. Ironically, people who did not make a National War Memorial for seven decades are now making a hue and cry when a permanent and befitting tribute is being made to our martyrs, it further added.

But another reason is that the Amar Jawan Jyoti was etched so strongly in the emotional psyche of the country that the new war memorial did not get the attention as the government had expected, and the government wants to promote the new memorial that it has built.