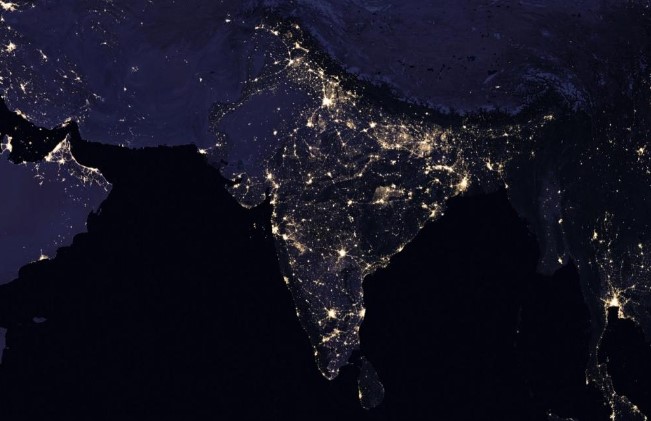 Only a few countries in the world have the technological capability to operate large-scale space missions and India is one of them.  India has launched more than 80 spacecraft since its maiden satellite launch in 1975 by the Indian Space Research Organization (ISRO). India currently operates INSAT and GSAT series communication satellites, earth observation satellites, and IRNSS series navigational satellites.  Dual-use satellites such as TES and Cartosat serve both civilian and military applications, whereas India’s first dedicated defence satellite GSAT-7 serves the military. India also executed the Mars Orbiter Mission (MOM) at a cost of $75m, spending approximately one-tenth of what NASA did on the MAVEN Mars mission

GPS is the most prevalent GNSS – the system owned by the US government and operated by the United States Air Force (USAF) is the Global Positioning System (GPS). It is one of the several space-based radio navigation systems which provides critical capabilities to military, civil, and commercial users across the globe.

GPS is freely available to companies, countries, and any individual with a GPS receiver. Owing to one of the numerous advantages that GPS offers, the airlines, trucking companies, shipping companies, and vehicle owners use GPS systems to accurately track and monitor the navigation route and location of flights, trucks, vessels, and cars in the shortest time possible. However, there are a few technological challenges associated with the use of GPS. Therefore, some of the developed countries across the globe are exploring, testing, and deploying satellites to build their positioning capabilities.

GLONASS (Globalnaya Navigazionnaya Sputnikovaya Sistema, or Global Navigation Satellite System) is a global GNSS owned and operated by the Russian Federation. The fully operational system consists of 24+ satellites. It’s old as GPS. The satellite orbits are designed in such a way that it can cover the polar region better than GPS which is oriented towards the temperate region.

European Union understood the importance of having its own GNSS and started implementation the Galileo system. The EU declared the start of Galileo Initial Services in 2016 and plans to complete the system of 24+ satellites in near future.

BeiDou, or BDS, is a global GNSS owned and operated by the People’s Republic of China. BDS was formally commissioned in 2020. The operational system will consist of 35 satellites. The netwok is under implementation.

Quasi-Zenith Satellite System (QZSS) QZSS is a regional GNSS being implemented by the Government of Japan and operated by QZS System Service Inc. (QSS). QZSS complements GPS to improve coverage in East Asia and Oceania. Japan declared the official start of QZSS services in 2018 with four operational satellites and plans to expand the constellation to seven satellites by 2023 for autonomous capability.

The Rise of NavIC

India has been launching navigation satellites since 2008. It initially launched the Geo-Aided GPS Augmented Navigation (GAGAN) system to help the civil aviation sector along with the up-gradation of airports. The results of the initiative in the civil aviation sector were very visible. This was followed by the launch of satellites for the Indian Regional Navigation Satellite System (IRNSS) commencing in 2013. Both are integrated to provide Navigation with Indian Constellation (NavIC or NavIC) since 2019. This regional geo-positioning system has been designed in India by ISRO to provide accurate positioning along the equatorial region. The current coverage is in India and the Indian Ocean Region.

This is an Independent and autonomous regional navigation system that has a service area of about 1500 kilometres around India. The system is under complete Indian control, with the space segment, ground segment and user receivers all being built in India It will have a range of applications including personal navigation.

India’s NavIC/IRNSS has three Geostationary satellites and four geosynchronous satellites, and these satellites are situated in much higher orbits.

NavIC satellites provide dual frequency bands (L5-band and S-band), which is why the system is relatively more accurate than GPS (which uses a single band and makes compensation for error due to signal deterioration by the atmosphere).

IRNSS is designed to provide accurate position information service to users in India as well as the region extending up to 1500 km from its boundary, which is its primary service area.  An Extended Service Area lies between the primary service area and the area enclosed by the rectangle from Latitude 30 deg South to 50 deg North, Longitude 30 deg East to 130 deg East. IRNSS will provide two types of services, namely, Standard Positioning Service (SPS) which is provided to all the users and Restricted Service (RS), which is an encrypted service provided only to the authorized users. The IRNSS System is expected to provide a position accuracy of better than 20m in the primary service area. 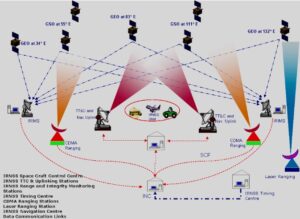 IRNSS has seven satellites complemented with the appropriate ground infrastructure as a minimum as it remains traditional in GNSS systems, the architecture is described beneath in three different segments: the space segment, the ground segment and the user segment.

The IRNSS Space Segment. Three of the seven satellites are in geostationary orbit (GEOs) and they are located at 32.5º East, 83º East and 131.5º East longitude. There are four geostationary satellites (GSO) in orbits of 24,000 km apogee and 250 km perigee inclined at 29 degrees. Two of the GSOs cross the equator at 55º East and the other two at 111.75º East (two satellites in each plane). The life span of the GEOs is 9.5 years and 11 years in the case of the GSOs.

The Constellation Design considerations have been mainly:

The IRNSS Ground Segment consists of

The ground segment undertakes the tasks of estimating and predicting IRNSS satellite’s position, calculation of integrity, ionospheric and clock corrections and running the navigation software.

The IRNSS user segment is made of the IRNSS receivers. They will be dual-frequency receivers (L5 and S-band frequencies) or single frequency (L5 or S-band frequency) with the capability to receive ionospheric correction. They will be able to receive and process navigation data from other GNSS constellations and the seven IRNSS satellites will be continuously tracked by the user receiver. The user receiver will have a minimum gain G/T of -27 dB/K.

There will be two kinds of services

Both services will be carried on L5 (1176.45 MHz) and S-band (2492.028 MHz). The navigation signals would be transmitted in the S-band frequency and broadcast through a phased array antenna to keep the required coverage and signal strength.

The data structure for SPS and PS takes advantage of the fact that the number of satellites is reduced to seven instead of the 30 used in other constellations- to broadcast ionospheric corrections for a grid of 80 points to provide service to single frequency users. The clock, ephemeris, almanac data of the seven IRNSS satellites are transmitted with the same accuracy as in legacy GPS, GLONASS & Galileo.

The performances expected for the IRNSS system are -position accuracy of around 20 m over the Indian Ocean Region (1500 km around India) and less than 10 m accuracies over India and GSO adjacent countries.

NavIC vs GPS: Which one is more beneficial for India?

With seven satellites, NavIC is considered to be at par with any Global navigation satellite system (GNSS) including US-based GPS, Russia’s GLONASS and Galileo developed by Europe.

GPS or Global Positioning System tracks the entire globe and is maintained by the USA. The constellation requires 24 Satellites to be operational and has around 31 satellites in orbit. All of these are Medium Earth Orbiting Satellites, which is to say that they are not stationary in space with respect to the revolving earth. GPS provides users with a single frequency band free of the general public and this makes calculations a bit more complex.

In 2020 the International Maritime Organization (IMO) recognized NavIC as a component of the World-Wide Radio Navigation System (WWRNS). This recognition was awarded in the 102nd meeting of the Maritime Safety Committee of IMO (MSC-102) held in November 2020. The committee stated that NavIC meets the operational requirements to assist in the navigation of ships in ocean waters within the area covered by 550 E longitude, 500 N latitude, 1100 E longitude and 50 S latitude. NavIC has been represented at IMO by the Directorate General of Shipping (DGS), Ministry of Ports, Shipping and Waterways with technical support from ISRO.

In April 2020, NavIC L5 was incorporated in the Radio Technical Commission for Maritime Services (RTCM) standard 10403.3 for differential GNSS applications. These developments will enable the utilisation of NavIC in the fields of maritime navigation, surveying, geodesy, etc.

NavIC is set to become the backbone of a public vehicle tracking system in India since it offers flexibility to local law enforcement agencies to monitor vehicles unlike international systems like GPS, and satellite navigation.  In April 2019, the Union Ministry of Road Transport and Highways made NavIC-based vehicle trackers mandatory for all commercial vehicles in the country in accordance with the Nirbhaya case verdict.

A new draft policy in India seeks to foster global use of its Indian NavIC satellite navigation system. The draft Indian Satellite Navigation Policy 2021 (SATNAV Policy 2021) is part of reforms of the Indian Space Research Organisation (ISRO)/Department of Space (DoS).

If implemented across India NavIC today holds the potential to replace the US-owned Global Positioning System (GPS) in the Indian Ocean and can cover areas up to 1,500 kilometres beyond India’s geographical boundaries which signals India’s independence from GPS and firmly planting its presence on the global space stage.