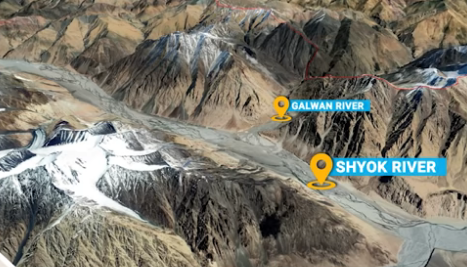 Is China Overestimating its Strength?

The brutal brawl at Galwan Valley on 15-16 June which led to major casualties on both sides after a gap of around five decades is a steep escalation in India-China military face-offs. The Chinese Communist Party(CCP)is utilising every trick in the book to draw global attention away from culpability for the Wuhan originated COVID-19 pandemic by stoking disputes with countries who are standing upto them. While Taiwan and Australia have borne the brunt of Chinese threats in May 2020, the CCP has now manufactured a crisis with India across the LAC.

The whole world is stunned at the Chinese savagery and deception displayed by its troops using primitive tactics –the PLA troops attacked with stones, iron rods, studded metal clubs, batons with barbed wires. These instruments were used on an unarmed patrol of the Indian Army that had set out to check on the Chinese withdrawing as per an agreement arrived at. Both nations possess nuclear weapons, ballistic missiles, cruise missiles, rocket regiments, advanced fighter aircraft, attack helicopters, aircraft carriers, submarines, destroyers, frigates, artillery and battle tanks;and yet the Chinese deciding to spill blood with implements like batons and metal clubs is a reflection of their primitive mind-set of utmost savagery and barbarity.

A deeper analysis of the incident brings out some critical facts. To achieve a psychological ascendancy, the mouthpiece of the CCP –Global Timespublishednumerous articles alluding to high-altitude manoeuvres by PLA troops, paratroopers and its armoured formations in Tibet. These articles were meant to subdue the Indian Army, and instil fear about what the Chinese could bring to bear if Indians opt for a bold stance. Chinese military planners are known to follow the old Chinese proverb from the Zhou dynasty – “Kill the Chicken to Scare the Monkey”. However, the effort failed to scare none of our troops along the LAC.

There is no gainsaying the fact that China enjoys superiority in comprehensive national power and bean-counting of its armed forces. Conflicts are however rarely decided by the superiority of numbers alone. Three important factors must be considered for any scholarly debate on the issue.

The first is the difference in the political leadership of India of 2020. The second is in the ‘in-theatre’ capability and comparison of troops, as was forcefully driven home by the Vietnamese in their splendid performance vis-a-vis the PLA in 1979.

India is presently led by a popular Prime Minister who enjoys widespread support from the masses and has a clear majority in the Indian Parliament. In contrast, Xi Jinping has carried out a pervasive purge of the CCP, eliminating likely contenders under the garb of anti-corruption drives.

The PLA has augmented-major military and civilian infrastructure throughout Tibet. It includes commissioning of the Qinghai-Tibet railway project in 2006. Taking cognizance of changing dynamics of PLA deployments in Tibet, the Indian Army has commenced building strategic roads along the LAC.  The Indian side has also raised new divisions and a Mountain Strike Corps to strengthen its capabilities.

These force accretions have, also, been supported by requisite force multipliers including the 155mm M-777 Ultra-Light Howitzers acquired from the USA and the K-9 self-propelled artillery produced by L&T, an Indian behemoth. More importantly, the Indian soldier is toughened by years of fighting terrorists in difficult terrain and enriched by the experience of wars in1965, 1971and Kargil wars, fought and won against desperate odds. The all-volunteer Indian soldiers are quite confident to handle the present conscript army of the CCP, which has never fired a bullet in anger, post the Sino- Vietnam War. It’s always the ‘Man behind the Machine’ that is the most important factor in combat.

A recent Harvard study on forces arraigned across the LAC brought out that the Indian Air Force holds a distinct advantage over the PLA Air Force (PLAAF) which would be forced to operate from its high-altitude bases in the Tibetan plateau. Atmospheric conditions at such altitudes pose heavy penalties on the all up weight of an aircraft as it takes off. It results in loss of range as also weapon loads that can be carried.

Recent force accretions of the IAF including SU-30sand their forward deployment allows India an edge over the PLAAF assets in Tibet.  The future deployment of the newly inducted Rafale fighters would tilt the balance further to India’s advantage. In addition, the IAF has also developed credible strategic airlift with the induction of C-130, C-17, and recently the Chinook helicopters, to rapidly mobilise battle-hardened Indian troops to forward bases within hours.

However, the most important facet that has never been lost on the Chinese is that the Indian Navy sits astride the lifeline of their economy. This trade valued in billions of US$ transits the Indian Ocean Region (IOR) to markets in Europe, Africa and West Asia. Concurrently, 52 per cent of Chinese crude oil imports transit through the sea lanes of the Indian Ocean.  Any disruption would inflict a body blow on the already distressed Chinese economy and by extension the fortunes of the CCP. Indian Navy’s new logistics agreements with France, USA and Australia etc., give it the flexibility of drawing logistics support at various ports in the IOR.

The Indian Navy also operates with leading Navies of the world in complex multi-lateral exercises like MALABAR, RIMPAC, JIMEX, INDRA and the AUSINDEX. Hence, while the impressive Chinese shipbuilding industry may produce warships in large numbers, but their ability to protect their national interests in the IOR remains quite doubtful.

In a conflict with China, it is apparent that the Indian side has now altered its strategic thinking. Two experts on China, Anit Mukherjee and Yogesh Joshi have recently highlighted in their research paper that the Indian Armed Forces have transformed their strategy to “deterrence by punishment”. Hence, while the Dragon could spew some fire, it is quite likely that in a future conflict with the Indian forces, the punishment it may receive could lead to the Dragon losing much more ‘than its face’.