“Guns, shots and shells fortunately do not deteriorate from climate. As a general principle, therefore, I would advocate that guns, shots and shells and small arms of all kinds should be obtained from England and that the manufactures from India should be limited to the supply of what may be called perishable articles, such as gunpowder, laboratory stores, gun carriages and wagons, harness and saddlery, etc.”

A distinctly colonial mindset of restricting local defence production to only those materials that could not be imported was unwittingly reinforced by the 1956 industrial policy. Because of its timing and the nation’s circumstances, that policy focused on building limited manufacturing capability and importing sophisticated arms. It placed the production of defence items in the Reserve List, ensuring that only the public sector could produce defence equipment. As a result, our defence industrial base consists of nine Defence Public Sector Undertakings (DPSUs), 41 Ordnance Factories (OFs) and a disordered manufacturing sector supplying to them. Most significant military system integration and production were based on imported technology, duly licensed, and usually two generations behind the cutting edge of defence technology applications of the world.

True design and development was confined to the nearly 50 R&D laboratories and establishments under the Defence Research and Development Organisation (DRDO) and a few Council for Scientific and Industrial Research (CSIR) laboratories. Our centres of higher learning like the IITs and IISc were still really purely research rather than application oriented institutions, with brilliant ideas that ended with publications in journals of repute, and rarely attempted realisation by manufacture of the laboratory developed models. The public and private industry too produced hardly any academic research, choosing to focus instead on what they could for immediate profit by tweaking the design acquired at considerable costs. Not surprisingly, our industrial policy proved quite damaging in the long run for the defence industry because this is a field where research takes years and considerable funds to reach fruition; large scale production is terribly expensive, markets are few, R&D is primarily in-house, and margins are slim. Yet, the stakes cannot be higher for a nation.

Enabling Environment
The sector for the first time was opened up to 100 percent Indian private sector participation with Foreign Direct Investment (FDI) up to 26 percent subject to licensing, in 2001. Reforms in the defence industrial sector and the acquisition policy have been undertaken continuously since then, beginning with the formulation of the Defence Procurement Policy (DPP) 2002 and its successive revisions (DPP 2015 is about to emerge), formulation of the Defence Production Policy in 2011 and the issuance of Joint Venture guidelines to facilitate public and private sector partnerships. In the recent past, changes have been made in the licensing policy, and the FDI limit has gone up to 49 percent and in exceptional cases, beyond that. The validity period of the licenses has also been increased to seven years with provisions for further extensions.

The nexus of government, academia and the private sector
Thanks to the continuous efforts of the past few decades, we inherit a considerable store of knowledge and research. Both the knowhow and the know-why of the defence technology are dominantly resident in government organisations. Though private industry has been increasing its penetration into the defence sector since 2001, there are still major gaps in R&D, testing infrastructure, system integration and other areas. As we strive to increase the private industry’s contribution, it is imperative upon the government to support them on a long term basis. After all, that is what all countries do. It requires handholding in various stages of the acquisition cycle ranging from R&D to validation and verification, manufacture, life cycle support and upgrades. Of course, long-term projections of how much of a particular piece of equipment are required, and a promise of stable orders is essential to make this industry viable. 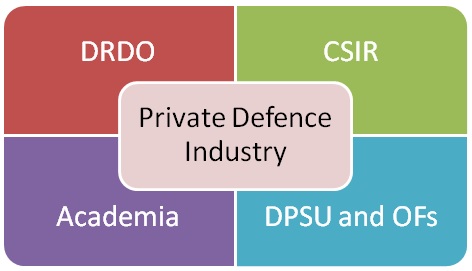 Many countries with a strong public sector defence industrial base relax state controls and increase privatisation. Private companies are made partners with public enterprises, not only in production but also in research. This has paid rich dividends not only in enhancing production, but in helping exports. This sort of long-term planning works well for the sector and also encourages more home-grown research and skill development, both of which require time to mature.

If our organisations could generate the intellectual property required for the design and manufacture of defence equipment – there is no reason why we can’t as we do not lack either brains or infrastructure – we could work out a supply chain system that drives profits back to us. The defence industry is tierised the world over. The system integrator researches and holds the IP, while the Tier I, Tier II and Tier III partners are strategically aligned with the system integrator. If we could apply such a model to defence, sourcing the smaller parts from MSMEs and have major companies make only the most critical components and integrate the final systems together, we have the blueprint for a viable and diverse industry that generates employment, profits and crucially, self-sufficiency.

The way forward
Imagine this: the government sets up an umbrella organisation with the sole aim of bolstering the indigenous defence production sector. DRDO, IISc, the IITs, CSIR, all contribute their research and their experts. DPSUs and Ordnance Factories offer their infrastructure. Private industries come in with their management skills and higher productivity. They take what is on offer and turn it into products with focused import of gap filling technologies, which the country then buys. The umbrella organisation balances all of these inputs and piece-by-piece puts together a resilient and ultimately coherent defence production base. We have all the moving parts already: the brains, the funds, the manpower and the infrastructure.

It is simply unviable to continue as the largest arms importer in the world. Those funds should not be leaving the country. They should be boosting our own economy. Our soldiers too deserve the very best we can give them and not two generations old technology bought from a foreign country that knows exactly what we have and how it works. If we can make our resources work for us, we will finally shake off that colonial hangover. It is high time we moved on from perishables and saddlery.

The General was a member of the Committee of Experts for amendments to DPP 2013 including formulation of Policy framework.