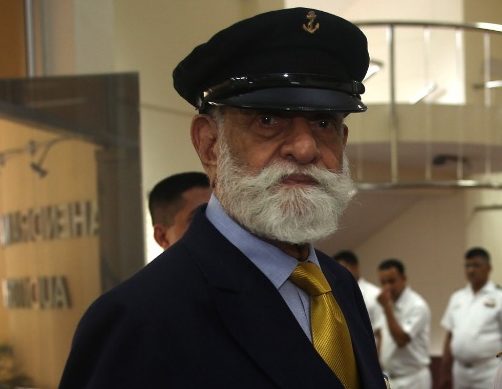 As a first- term cadet in July 1976, Rear Admiral Manohar Prahlad Awati (MPA) was the first flag officer I saw in flesh and blood and he could have been right out of any boyhood sea story as the proverbial “Old Sea Dog.” When Vice Admiral Awati crossed the bar during the first watch (2000-2359H in sailor-speak) on 03 Nov at his home in Satara, just a little over 91, he would have still looked every impressive inch the quintessential seaman. My first impression– and the world’s last impression– is by no means unique. Admiral Arun Prakash, former CNS and a life-long admirer of his, recounted to me that he was “thunderstruck” in 1964 as a naval cadet when he saw him as his Commanding Officer of Indian Navy Ship (INS) Tir. He was always an imposing figure and never necessarily had to be in uniform to look so. As cadets they were surprised to find him sea- sick often, but he was always the Captain, and always in command nonetheless. Some naval officers of his time may perhaps have been derisive about this, but MPA was in good company of Horatio Nelson, to name but just one. I will return to it a little later.

An Ordinary Start; an Extraordinary Life 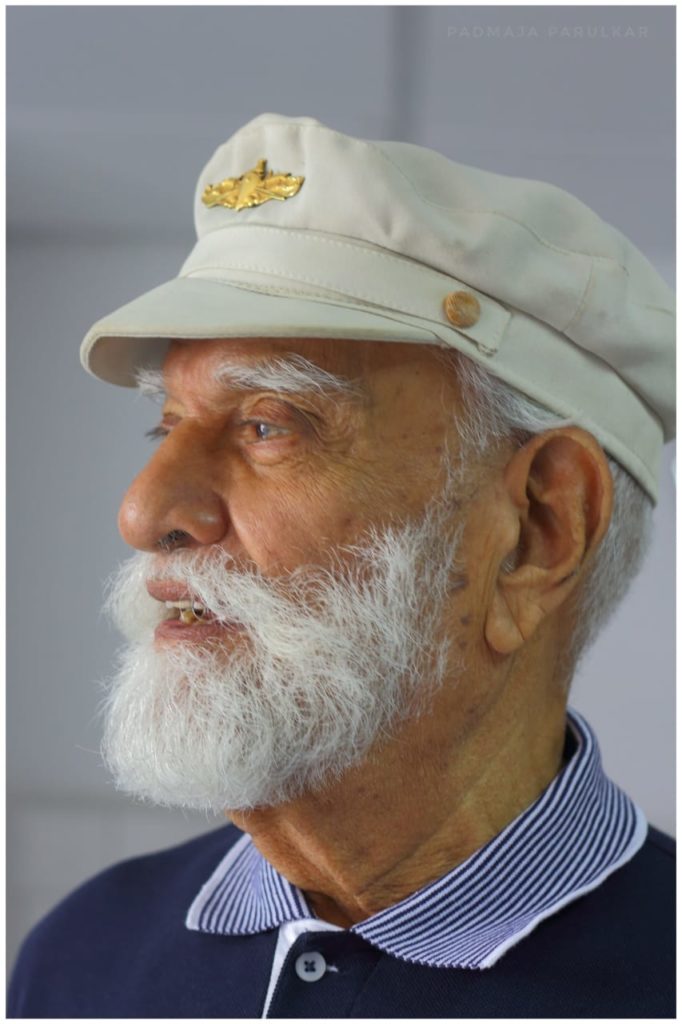 Born into a very middle- class Mumbai family in September 1927, he joined the Royal Indian Navy in 1945 after passing out from the training ship Dufferin. He specialised in communications and as a signals officer he was always well-regarded. He commanded four ships and in the 1971 war, as the Captain of INS Kamorta and Squadron Senior Officer, was awarded the Vir Chakra for his gallantry and leadership during operations in the Bay of Bengal. In 1973, he was suddenly moved to command INS Mysore as a consequence of some strife on board the ship.

He turned the ship around with his leadership, his ability to connect with men and the way in which he re-forged the bonds of leadership and camaraderie between officers and men. According to Admiral Bangara, who was his Fleet TAS officer (anti- submarine warfare), MPA had a remarkable attribute of never losing “the common touch” and winning anybody over with his innate empathy, humanity, and above all, self- discipline and personal example. I can recount some examples of his uncanny ability to always remember a name and never forget a face, but that is not necessary here. People interested him, and people were therefore, interested in him.

As a flag officer he was of course the Commandant of NDA and then commanded the Western Fleet in 1978-79. The fleet distinguished itself by training hard and showing the flag with pride. There are some fine anecdotal recountings by several of his contemporaries and also others who engaged with him (Admiral Suresh Bangara’s blog, Cmde Srikant Kesnur and Maritime History Society’s members and events are good sites to visit). He was very effective as a Commander- in – Chief, with a wonderful combination of leadership, ability to switch-off and let people do their jobs and be given credit for it.

His flamboyance, perhaps even a bit of showmanship, erudition, sophisticated and self- deprecating humour have all been commented upon widely over the years. He had an endless stock of stories and equally, there is an endless stock of anecdotes about him. Unlike in some other cases, most of them are true! Some who associated with him during his service as well as in retirement did feel that at times the power of his personality, his booming voice, erect posture and steady gaze gave off a mistaken impression to some of bluster and posturing. It was anything but that! His intellect shone through because of several things. First, he was very well read at a time when quite a few officers were reasonably well-read themselves. Second, he had an elephantine memory and a “filing and recall” system that would rival electronic wizardry we have become attuned to. Third, he was so thoroughly interesting, perhaps because he was so thoroughly interested in you and in a million other people and things. I do not know if he knew of games like “name, place, animal, thing” but he would have won it hands down always while sometimes pretending to lose!

During his career, he developed interests as wide-ranging as ornithology, flora and fauna; maritime history; Maratha and other coastal forts; yachting and sail-training; improving labour relations in the dockyards and depots where civilians needed to feel a more integrated part of the Navy. As the CINC, he would walk into a machine shop in the Naval Dockyard, join the yard “matees” for a cup of tea and a vada pav or samosa. It was not a stage-managed affair, with separate crockery, sprucing-up, “Potemkin village” mode as sometimes we clumsily and foolishly tended to do in later times. Yet, I have been witness to him getting out of his flag-car (a non- AC Ambassador in those more austere times) and halting a Navy truck being driven rashly. He bellowed at the civilian driver in chaste Marathi, adding an expletive that conveyed – “was he driving a truck or herding a rather difficult to manage buffalo”. He turned around, recognized me as the officer of the guard a few months ago when he was returning my Captain’s formal call, and winked at me with a smile that perhaps said, “I think that might work for a few months of safer driving.”

He accepted his sea-sickness well and not many CINCs would embark a small sailing ship and sail from Kochi to Colombo, flying his flag. I know of a delightful story of this sortie when the solitary WC in the yacht packed up and everyone had to “go” over the side. While the precise quip ought not be repeated here, his comment to a cadet who had inadvertently hitched himself in the morning twilight somewhat too close for comfort was an uproariously funny one about being guilty, even in omission, of sycophancy! Years later, when I myself was a flag officer at Kochi, we had a very serious discussion on the deleterious effects of yesmanship and sycophancy in our own times but also in his. His staff said he always valued a straight answer, a disagreement, and honesty. Likewise, as Admiral Arun Prakash recounted to me, he didn’t hesitate to speak up and speak out his mind or tick off a junior if and when required. He was an ethical beacon to the Navy of his time.

MPA had a naval career of about 35 years and for which alone he could be fondly remembered. Not one to rest on his oars, in his even longer “career” as a veteran, his heart continued to beat for India and the Navy in many diverse ways. He set up the Maritime History Society; helped advance conservation; edited serious volumes on forts, fortifications; travelled to educate others (and unfailingly impressed everyone in the process). Much has already been written about such forays of his; and hence there is barely the need to say recapitulate further details. That Admiral Prakash once called him a “national treasure”, is not an exaggeration.

For all his sartorial style – which he carried off naturally and unpretentiously, something a few imitators have not been able to do — and his flamboyance, MPA was very unostentatious, led a simple, disciplined life and never displayed feet of clay. At home he would be in a lungi or shorts. Those who visited the Awatis at home always had simple food, and great conversation. He was a teetotaler to boot throughout his life, never needing fuel or fortification for Dutch courage. Likewise, when he visited any member of his team, he never expected any ostentation or special effort for his sake and would chide the hosts if they did so.

Children loved him because he had so much to discuss with them, tell them and listen to them. Admiral Bangara said that as a Fleet Commander or CINC, when he needed to travel at his own expense, he would do so in third class without hesitation. It was not a pretence at common touch, but genuine simplicity and frugality. But, fellow passengers could not take their eyes off him, so imposing and electrifying was his presence. From the time I had a brief exchange with him as a cadet, and a few times through the decades, what I noticed was that he would look me straight into the eye and welcomed the mirror-imaging. I recall a conversation when he mentioned being upset more and more at the ostentation, elaborate menus, the expenditure on entertainment and the growing divide between senior and junior officers at social events that he saw during his travels and visits.

A great sailor, a scholar, a maritime history enthusiast, an interesting as well as interested man, has himself passed on into history. We can be sure he is already regaling his companions from all walks of life with stories amidst much mirth. In December 2014, my course (56th NDA) had a reunion in Khadakwasla when the Commandant and his Deputy were both fortuitously our course-mates, we had invited MPA, our first Commandant as a Guest of Honour. His speech was remarkable but among his opening lines he said, “So, here I am. At my age, it is remarkable to be anywhere at all…” For once, he was wrong. He will always be in many, many hearts. I end with the last lines of Tennyson’s poem: Crossing the Bar:

“And may there be no sadness of farewell,
Where I embark;
For tho’ from out our bourne of Time and Place,
The flood may bear me far,
I hope to see my Pilot face to face
When I have crost the bar.”