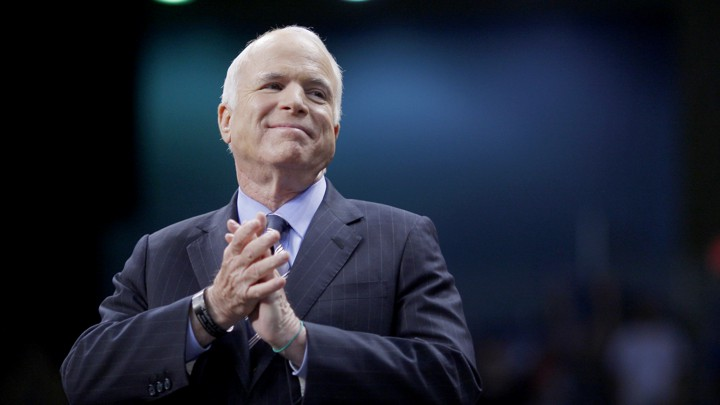 Americans mourned, without exception, when Senator John McCain expired on 25 August, 2018. He stood tall among American leaders, both as a soldier and a statesman. The author takes a somewhat different look into the life and times of the Soldier-Senator. In doing so, he draws some societal parallels as well as some divergences between our armed forces as seen by ‘an observer at a distance’.

Requiem for a “Sailor Home from Sea”

August this year marked the passing of former Prime Minister Vajpayee in India and Senator John McCain III in the United States. Their backgrounds and their lives were different, and yet their decades of public service mattered very much to their respective countries. They were both given national funerals that had in the background and foreground both, ordinary citizens, military elements and national leaders, current and past. Even amidst contemporary political differences (as would be expected in democracies), there was a multi-partisan (in India) and bi-partisan (in the US) appreciation of their public service and McCain’s military service as well.  These are important virtues that signify the democratic strands that exist in the world ’s largest and the world’s richest democracies. However, this article is not about comparing and contrasting their lives, or about politics. It is more to muse about what John McCain’s journey highlights to an observer at a distance.

John McCain’s six years as a POW in North Vietnam defined him in more ways and much more often than he himself would have liked. He generally was very reticent about those years in which he displayed heroism and yet felt ashamed at the occasional periods where he thought he had not been able to withstand the deprivations.  The churn that the United States and the American people went through changed that country in some ways. Of course, Vietnam’s sacrifices, the price it paid in blood during the political and military struggle to unite itself were much, much greater.

McCain’s father, Admiral John McCain, Jr. had taken over as the CINC of the Pacific Command a few months before his son was shot down during a strike mission over North Vietnam in 1968. He certainly was a prize prisoner because of this connection. The son declined to be released from prison earlier than the sequence of imprisonment and neither did his father step in at all. This reminds us of two similar incidents. In 1965, Flt Lt Nanda Cariappa of the IAF declined any special treatment or early release even when offered as such by the Pakistani dictator, Field Marshal Ayub Khan. Nanda was the son of then General KM Cariappa, and along with Ayub Khan was a part of the British Indian Army before partition. One recollection by a Press Information officer of the 1960s era recounts Gen Cariappa’s reply to Ayub Khan: “He is my son no longer. He is the child of his country, a soldier fighting for his motherland like a true patriot. My many thanks for your kind gesture, but I request you to release all or none. Give him no special treatment.”

In World War II, Stalin’s older son Yakov had been a POW of the Nazis when they offered to swap him for Field Marshal Paulus after the German defeat at Stalingrad. Stalin refused. His son died in a German camp, presumably by throwing himself on an electric fence. (Stalin’s other son, Vassily of course led a very privileged, protected and debauched life, rapidly rising to be an air force general of no merit at all.)

The main point suggested here is to emphasise John McCain’s character. For a military man, it is possible to display leadership, honour and “conduct becoming” even as a POW. McCain did that despite his own sense that he caved in at times to torture. This author’s interest in McCain was as a result of an elective at the US Naval War College several years ago. The very popular but hard to enroll elective (especially for an international student) was called “The Philosophy of Moral Obligation”. It was informally called the Stockdale Course and named after VADM James Bond Stockdale who crafted the curriculum with the help of some professors of philosophy when he was president of the College. Quite a few readers may know that he was the ranking POW in one of the larger Hanoi POW camps and was awarded a Medal of Honour after his release for his leadership, moral courage and the stoicism he displayed.

In 1999, a few years before I did the course, Stockdale had stoutly defended John McCain (by then a senator) against charges of cowardice in captivity. He said that there could be periods when even the bravest could buckle under captivity. McCain’s conduct was honourable and the complexities had to be taken into account. One cannot say for sure, but John McCain may have had Stockdale’s supporting words in mind when he defended the opposing Presidential candidate in 2008 against what he thought were unwarranted allegations.

McCain’s passing perhaps reminds us of a few common or at least similar predicaments in our two democracies. Military service is applauded; the armed forces are greatly respected by the citizenry and yet inequities exist. Two inequities that John McCain brought up sometimes and quite unambiguously in an interview on Ms Whoopi Goldberg’s TV show “The View”  were the predominance of the lower- income groups during the draft in the Vietnam war as well as the loopholes in the system which enabled many better-off young men to avoid the draft on flimsy medical grounds. The all-volunteer force (AVF) in the US shows similar class- inequities. In India as well the situation is not very different even while the uniform is similarly respected in towns and villages. Quite a bit has been written about the near- total absence of sons and daughters of political leaders, of civilian bureaucrats as well as economically well-off people signing up to serve. This too is a form of inequity and perhaps there is a price to be paid in ways that may not be too apparent.

That brings us to the other similarity of “military families.” This has been a common societal thread in America and India. Its great positives are the continuation of hallowed tradition of service and selflessness. Perhaps one major negative to consider is the risk of disconnectedness, which, with economic and cultural preferences of de facto “non-military” families, exacerbates the divides. A Society- military gap is not good in any nation and many Americans recognize this.

Of course, McCains were and are a military family. His father and grandfather were both four-star admirals. His father served as a young submarine commander in WW II where his own father was a distinguished naval aviation flag officer and combat commander. Again, the father served alongside his own son in the Vietnam war as we have already seen. John McCain, III’s adopted son from his first marriage was a naval aviator as is his oldest son from his second marriage. Interestingly–and quite unusually from an Indian perspective– his youngest son enlisted in the Marines and served in Iraq. Audiences in India watching the funeral on TV may have seen him in the uniform of an Army sergeant that he currently is in the Army National Guard.

McCain never used these examples of his sons serving to score political points and also because he didn’t want his Marine son or his comrades to be at greater risk if this became known. There is a fine Australian example of  General Peter Cosgrove that this author knows of from the days he was posted at the Indian  High Commission in Canberra and one on whom he formally called on the day after reaching there. He was then the Chief of Defence Force (and a former Army Chief and a Military Cross recipient in Vietnam) with three sons. All three of them were quietly serving in Afghanistan as enlisted soldiers in the Australian Army. This information was again kept from the media for obvious reasons. This is a great example of internal egalitarianism of service in the forces, while quite literally serving in “their Dad’s Army.” By the way, General Cosgrove who has been the Governor General of Australia since 2014 is a graduate of the National Defence College, New Delhi and has written warmly in his autobiography about his year in India attending the course. Military families abound in many continents!

McCain was the quintessential military leader, virtuous in the largest sense but with the occasional wart, or the passing folly and the ability to admit an error of judgment. He carried the same qualities honed while flying for his navy and nation into a prison cell and onto the floors of legislatures as he enriched public life in his country.  His funeral saw his political opponents, his military colleagues, ordinary Americans as well as serving military leadership in full attendance. This was something that could have been seen—but wasn’t– during Field Marshal Manekshaw’s funeral.

Militaries everywhere forge many leaders of his ilk and ever so often. McCain’s life and his death bring this great reality to the fore.