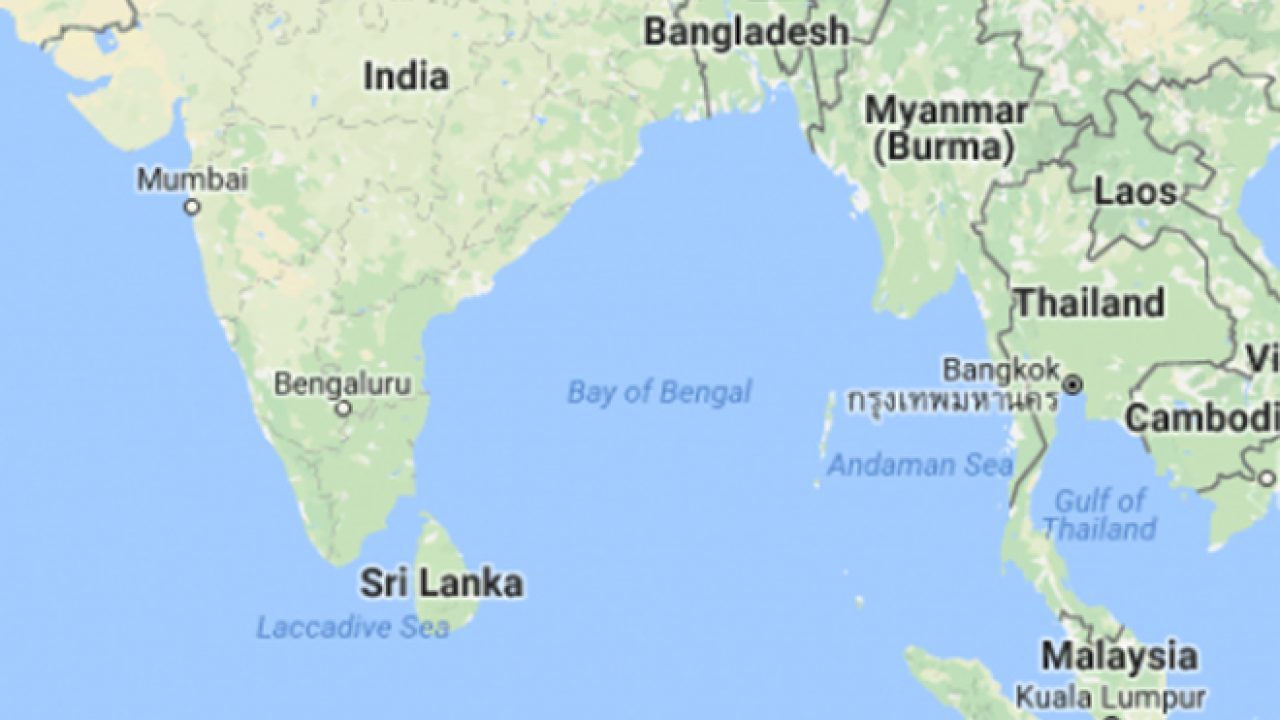 Prime Minister Narendra Modi kicked off the diplomatic chapter of his second term with ‘Neighbourhood First 2.0’ policy in focus. Though it has been India’s foreign policy priority for some time, the emphasis has shifted from SAARC to BIMSTEC and Indian Ocean Region (IOR), in particular.  Does it a signal a major shift in India’s neighbourhood policy?

In 2014, Narendra Modi had invited SAARC Heads of States to his swearing-in ceremony in a signal that conveyed New Delhi’s intent of giving importance to its immediate neighbourhood. This time around, PM Modi invited the leaders of BIMSTEC—an economic grouping of countries dependent on the Bay of Bengal — demonstrating India’s commitment to its ties with the immediate neighbourhood sans Pakistan. The BIMSTEC is fast replacing SAARC as the primary forum for India’s regionalism. India’s interest in the Bay of Bengal and the Modi’s enduring focus on Indian Ocean island states underlines the emerging maritime dimensions of India’s neighbourhood policy to counter China.

The challenge before the Modi 2.0 is to reset the dynamics in the immediate neighbourhood and strengthen ties with all countries in the region, especially in the face of growing territorial ambitions of China.  Also, India has to ensure that the smaller Indian Ocean nations don’t fall prey to the designs of the terrorist groups being nurtured by Pakistan.

PM Modi has signalled India’s readiness to work with other powers in promoting regional prosperity and security. For such an objective to work out, India has to formulate Neighbourhood First 2.0 policy in such a manner that it can thwart the nefarious designs of its adversaries.

In line with the stated policy, Modi undertook his first visit to the Maldives and Sri Lanka reiterated the priority India attaches to its ‘Neighbourhood First’ policy and the SAGAR Doctrine. SAGAR refers to “Security and Growth for All in the Region; a doctrine conceptualised by Modi aiming to keep the Indian Ocean region peaceful and secure. This move is a reflection of the Indian assessment that the Indian Ocean island states are the key to India’s strategic geography’s security. A beginning in this regard was made in 2015 when Modi travelled to Seychelles, Mauritius and Sri Lanka and outlined the SAGAR concept. The Prime Minister of Mauritius’ presence during Modi’s second oath-taking was a significant indicator in that direction. 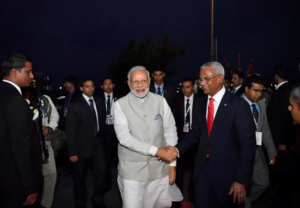 Relationships between India and the Maldives have changed dramatically after the election of Ibrahim Mohammed Solih as President in September 2018. During the tenure of Solih’s predecessor Abdulla Yameen, the bilateral relations were strained and witnessed a distinct drift. Disregarding India’s deep concern, Yameen opened up Maldives for Chinese investments in many areas including projects that impinge on India’s security in IOR. The new Maldivian government is chary of the huge Chinese debt burden inherited from Yameen’s government and intends to re-engineer its China policy. The Maldives is looking at India to help bolster its economy and wriggle out of the Chinese debt trap.

In this regard, President Solih is looking towards India with hope and expectations and is keen to strengthen strategic ties with India. Significantly, Modi was the only Head of Government to attend President Solih’s swearing-in in November last year which was followed by latter’s visit to India in December 2018.

While China has made inroads in Maldives and expanded its footprint in the past five years by financing mega-projects such as the bridge linking Male and Hulumale, buying islands, contributing to Maldives’ tourism etc., India’s approach has been different.

In the past six months under President Solih’s government, India has fast-tracked many projects that have significantly touched the lives of Maldivians in the health sector, education, urban development, sports and restoration of old mosques by Archaeological Survey of India.

In addition, and significantly at that, India provided budgetary support and revived lines of credit to deal with the debt burden and finance new ventures. During Solih’s New Delhi visit, India announced a $1.4 billion financial assistance package for the Maldives, weighed down reportedly by $3 billion in debt to China.

PM Modi inaugurated two India-sponsored projects in the Maldives, the Coastal Surveillance Radar and the Composite Training Centre for Maldives National Defence Forces. The first project is in line with India’s initiative to monitor white shipping in the Indian Ocean Region. India has gifted surveillance radars to other countries, too.

During the visit to this South Asian archipelago nation, PM Narendra Modi in his speech at People’s Majlis (Maldivian Parliament) said 50 per cent of the world’s population lives in the Indo-Pacific and he had projected SAGAR  as a blueprint for cooperation in Indo-Pacific. He had said that India and Maldives have an opportunity to work for keeping the world’s “most important sea lane” secure. Modi said that the ‘Neighbourhood First’ policy was a priority for his government and noted that India gives the highest priority to its relationship with Maldives. Assuring that India will remain a “dependable, strong and leading partner” in Maldives progress, PM Modi had made a veiled attack on Pakistan saying state sponsorship of terrorism was the biggest threat before the world.

India is wooing the Maldives in every way possible, now that there is a pro-India government in Male, with Modi’s visit, it is sure to breathe new life into bilateral relations with the Maldives. 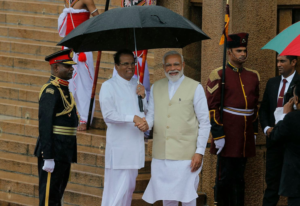 India needs to craft the foreign policy in such a way that both Male and Colombo are onboard in thwarting the emerging threat of Islamic terrorism. The April 21 Easter bombings in Sri Lanka was a sinister signal of the Islamic State (IS) looking for new venues to strike following its West Asian footprint atrophying. The horrific terror attack was as much a wake-up call for Sri Lanka as it was for India.

There is a greater need now than ever before to deepen the ties with two key neighbours as they remain critical to India’s strategic heft. India cannot afford to allow Chinese influence to grow in its backyard nor can it let Pakistan’s terror machine hold sway in the region. During the Colombo trip, PM Modi conveyed to South Asian region that terrorism is a ‘joint threat’ and India will take the lead in fighting it. Sri Lankan President Maithripala Sirisena and PM Modi agreed that there is a need to coordinate the fight against terrorism through collective and focused action.

Sri Lankan Prime Minister Ranil Wickremesinghe sought India’s help to train the country’s security forces in counter-terrorism during his meeting with Prime Minister Narendra Modi. Wickremesinghe disclosed, “During his trip, we discussed matters including the strengthening of regional security through reviving tri-lateral talks between Sri Lanka, India and the Maldives. I also requested that India work closely with Sri Lanka’s security forces, providing them with counter-terrorism training and logistical support.”

Wickremesinghe also apprised that a series of joint initiatives by India and Sri Lanka had been planned for execution in the Maldives, to ensure continued economic cooperation. He also assured Modi that the delayed Indo-Lanka projects will be expedited.

India is also investing in various projects in Sri Lanka, most of which are for improving the lives of the people there. There are Rs 250 crore worth community projects in various stages of completion. India has also begun new investments in Sri Lanka on a trilateral basis with Japan. These include developing an LNG terminal, a water supply project and the development of East Container Terminal of the Colombo Port.

Indian Foreign Secretary, Vijay Gokhale has also stated that there would be more such trilateral initiatives with like-minded nations in the coming months. An example being the tie-up with Japan for developing Sri Lanka, apparently to reduce the Chinese footprint there. It goes without saying that the projects fit neatly under the umbrella of the SAGAR doctrine.

India’s new External Affairs Minister S Jaishankar’s Thimpu visit is significant too. The Ministry of External Affairs commented that it reflects the importance India attaches to Bhutan. Indeed, the tiny Himalayan Kingdom is important to India as a buffer against China. The Doklam stand-off did stress the Indo-Bhutan ties. It is here that the expertise of the career diplomat Jaishankar must come into play while crafting a suitable strategy to tackle the two most formidable opponents —Pakistan and China.

The challenges for Modi 2.0 on the foreign policy front are now far more tricky and complicated.