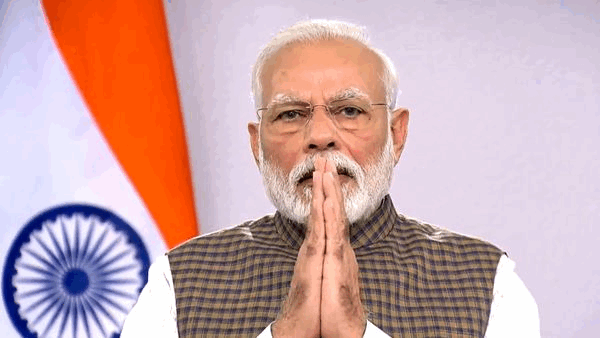 At 8 PM on the 19 March, the Prime Minister of India, Narendra Modi was on every national TVchannel to announce a 14-hour long Janata (People’s) Curfew on Sunday, 22 March 2020. At that point in time, India was staring into dark recess with no answers to the steady march of the Chinese Corona Virus pandemic. The country was nearing the cusp of a major spike in the spread of the virus, as could be predicted from the models that countries already battling the virus had experienced.

The question that every Indian was asking is what can a country of 1.3 billion people possibly do? Its barely efficient healthcare system can hardly cope up with even the day-to-day requirements. The virus was already marching steadily to its next stage of possible exponential progression through inter-personal contamination within the country. Till then, most of the cases were confined to people who had landed from abroad.

In moments as amorphous as these, the citizen inevitably looks up to the national leadership. The situation was one that called for mass participation to stall the pace, if not stem the propagation of the virus. Such moments also call for great leaders.

Modi had already displayed his grasp of the problem and decisiveness. He had ordered an evacuation of Indians from Wuhan, Iran, Japan and Italy, thus proving his credentials of being a compassionate leader. He had a video conference of SAARC Heads of States, which possibly was the impetus for G-20 to hold a similar exercise later. The SAARC exercise also vaulted his status globally for being the first of the leaders to comprehend the need for a global response to the global catastrophe in the making.

In India, more than any other factor, there was a need to galvanise the nation and raise its confidence to go into a battle, the like of which it had never been fought before. The battle gear was in short supply, both in terms of quantity and quality. Globally too, no one had medicine to grapple with Covid-19.

Under the circumstances, there was a need to mobilise a nation to observe a few basic steps in their day-to-day lives that offered the only chance to face the calamity, otherwise very ostensibly in store. It was a situation far more tenuous than that faced by nations at war. Worse, the enemy was a formless, unseen, unheard of virus that had been given all the time by the Chinese to spread its tentacles globally. The requirement was to communicate with the citizens and win their support.

A strategic messaging has essentially to be leadership-driven, answering the target audiences’ evident desires or aspirations, easy to comprehend, widely disseminated and directed at achieving a strategic goal. There are more ingredients and methods of communicating a strategic message, however, in all cases, the message has to be tailored effectively to best suit the targeted populace.

At 8 PM a 19 March, the Indian Prime Minister explained the whole story on the national telecast in the most simplistic language, quite within the grasp of the least educated. He emphasised the need for social distancing. At some point, he made two statements that really drove most Indians towards a momentous instant hitherto fore not experienced by them in their lives.

The first one was the nation would go into 14-hour long self-imposed curfew with effect from 7 AM to 9 PM on the next Sunday, 22 March.

The second was a rallying call that was meant to bind Indians together to fight a long battle that would follow. He asked all Indians to step out into their balconies or courtyards for what he termed 5 minutes at 5 PM on the day of the curfew.

Each man, woman and child was expected to clap/ beat a drum/blow the conch, anything; a symbolical coming together of the country to thank those who were at the forefront of India’s battle against the virus.

On Sunday, India looked like a deserted sub-continent. There was barely any transport or people on the roads of this densely populated country. The silence on the roads prevailed till suddenly at 5 PM, the noises of millions clapping, banging drums, steel plates, blowing a conch rendered the atmosphere euphoric. It was undoubtedly a great example of effective strategic communication proven as successful by the participation of India’s millions.

Indians are, by and large, emotive people. They are a potpourri of cultures and customs.  A large majority follows up on the traditional Indian greeting of Namaste from a distance, with a tight hug. Their Prime Minister is best known for it. Narendra Modi knew he had to get his people together, bind them in a tight bond and rally them to undertake a seemingly impossible objective: enforce a lockdown in a country of 1.3 billion; mostly as a voluntary exercise. He made his appeal emotive. There was nothing tough about his stance. He called it Janata (Peoples’) Curfew.

There was also the requirement of preparing the country for what was in store; a longer lockdown. Surely, he didn’t expect a smooth sail and knew enforcement will remain an important factor, but social pressure on offenders was perhaps expected to surge to the point of being a decisive influence.

Strategic communication requires reinforcement and Modi followed up with his 8 PM appearance on 24 March. Everybody was looking askance by then! They knew a day’s curfew wasn’t going to be enough to beat the Chinese virus.

Modi announced the bigger strategy: the nation would go into a 21-days lockdown.

By now, Indians were prepared to rationalise and understand that there was no alternative to it. Modi had sold his battle plans without a hiccup. His communication strategy had been perfect.

There is a lot ahead as the nation plods through these impossible weeks. Where are the meals for the 30 per cent below the poverty line? Crowded shanties cannot allow social distancing. Migrant labourers will want to reach home. Let’s not even think about the loss to the economy. How will the three weeks pan out will be the deciding factor in people deciding whether Modi is a leader thrown up by an ancient civilisation, or not.

Notwithstanding every other detail, Modi’s address to the nation, especially on 19 March that ably rallied a nation of a billion-plus, will remain a landmark exercise in strategic communication that succeeded.

The Indian leadership displayed its clarity of mind, quick grasp of possible fallouts and dynamism to the whole world. Men and women on Indian streets have greater confidence in their leader to fight their way through this massive havoc.

The best brains in the country are surely working on the most challenging problems that they have ever faced. Surely, in a day or two, every critical aspect will be addressed. As long as the nation retains its vigour and remains combative, we will get through, not without scars, but yet as only Indians can.