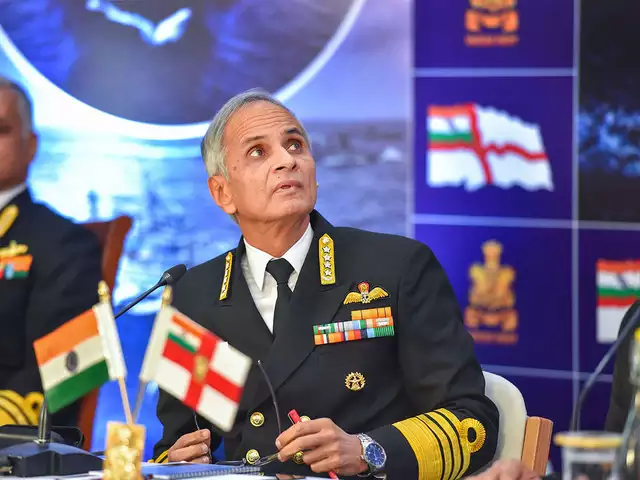 Naval Chief Admiral Karambir Singh said that the force is fully committed to the ‘Make in India’ vision. He emphasised Navy’s commitment by putting forward the its report card during the annual press conference held on 3rd December ahead of the Navy Day celebrations. Since December 2108, close to 88 per cent of contracts and Acceptance of Necessity (AoNs), by value, have been concluded with or accorded to Indian vendors. He also informed that the Navy’s share of the defence budget has declined from 18 per cent in 2012 to approximately 13 per cent in the financial year 2019-20. Inspite of the crunch, the Navy remains committed to force modernisation by optimum utilisation of the allotted budget.

Highlighting the fact of the Indian Navy having been at the forefront of ‘Self Reliance in Defence Production’, right since Independence, Admiral Singh said, “Our commitment to this pursuit is seen by the fact that out of the 50 ships and submarines, currently under construction, 48 are being built in Indian shipyards. These include the Aircraft CarrierVikrant, P15B class Destroyers, P17A class stealth Frigates, Offshore Patrol Vessels and Scorpene class submarines”.

The last of the P 28 ASW Corvette is scheduled for delivery by early next year. The delivery of four additional P8I Maritime Reconnaissance Aircraft is scheduled by 2021, said the Navy Chief while informing that, “We have also contracted for 16 ASW Shallow Water Craft and 36 aircraft which includes HAL built 12 Dorniers, 16 ALH and eightChetakhelicopters”.

Providing details of future acquisition planning, the Navy Chief revealed that Acceptance of Necessity (AoN) has also been accorded for 41 ships, 10 Kamov 31 helicopters, 24 Multi Role Helicopters and six additional P-8I aircraft.  Elaborating about the Government’s Strategic Partnership Model, he said that Navy is pursuing the project of P 75I submarines and Naval Utility Helicopters.

Commenting on indigenisation plan, Naval Chief said, “The Indian Navy has also commenced the process of indigenizing complex and high end technology equipment, which are presently being imported, such as Marine Diesel Engines, Power Generators, Shafting and Propellers, with active participation from Public and Private Sector industries. Our aim is to reduce import dependency and progressively increase indigenous content in our shipbuilding projects”.

Admiral Singh also said that the Navy’s long-term plan is to have three aircraft carriers. The first indigenous aircraft carrier will be fully operational by 2022 and will have MiG-29K aircraft.

He said “The Navy’s Long Term Capability Plan envisages induction of three Aircraft Carriers, so that two CBGs (Carrier BattleGroups) are available for dispersed deployments in the IOR at all times. The broad contours of IAC (Indigenous Aircraft Carrier) 2, to be constructed in India as a 65,000 ton CATOBAR carrier with electric propulsion have been formulated and the case will be processed for accordance of AoN.”

He added, “As the Naval Chief I am going to convince that the country requires three aircraft carriers so that two are them are operational at any given time. We are preparing our case to make sure that it meets the requirement and then we will go up to the government for the AoN (Acceptance of Necessity). This is our thinking at the moment”.

The Naval Chief said India is playing a stabilising role in the Indo-Pacific region and no action by any other player in the region should impact New Delhi. On being asked about the Chinese presence in the Indian Ocean Region (IOR), Admiral Singh said, “Presence of China in the IOR has started in 2008 and their presence in IOR is increasing and we are constantly watching it. On an average seven to eight Chinese ships are available in this area some of them for anti-piracy and some doing scientific research in this area. Sometimes they come here when some satellite launching is done. They are here for various purposes. Our stand is that if something is in our region then you have to notify or seek our permission”.

On Pakistan, the Navy Chief said, “As far as Pakistan is concerned we all are aware what kind of intentions they have. My concern as a naval officer is that the maritime interests of our country; no action of any other player in our region must adversely impact on us”. He went on to add that “We also know about the intelligence inputs about that terror groups planning to enter India through sea routes. We have put in adequate defence mechanism to thwart any threats”.

Admiral Singh asserted that the Navy is fully prepared to deal with national security challenges.“We are putting our defence and security in place to ensure that threats from terror groups are thwarted. I want to assure that Navy along with the Coast Guard and other security agencies are ready to face any challenge.”