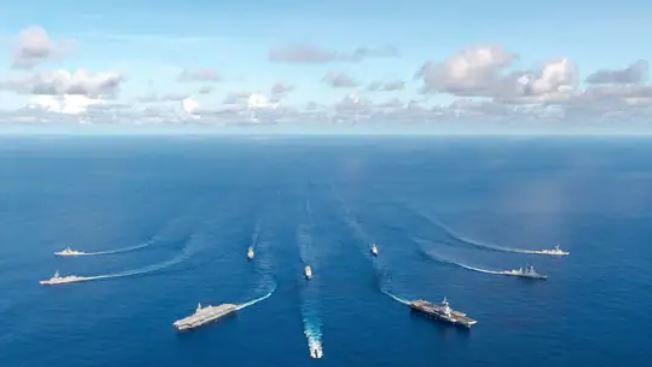 QUAD leaders met virtually to create a historical milestone with leaders of the world’s four major democracies coming together to drive the prime agenda of stability in the Indo-Pacific region. Quad’s origin may be credited most of all to Shinjo Abe, the Japanese Prime Minister in 2007, however, credits for the organisation to have graduated from a rudderless ship to an evolving force in being, needs to go to the Chinese. Chinese belligerence and coercive manoeuvres, both military and diplomatic, have been the biggest boosters in harmonising the Quad’s constituents to a point where they have been able to identify multiple common greater objectives.

The ‘Spirit of the Quad’, a joint statement by the four parties, heather-to-fore not issued in the previous joint consultations at various levels, is testimony to an increasing degree of convergence among the member states on their approach to issues of global concern in the region. Though not specifically alluded to, containing the Chinese aggressive march has centrality in their overlapping visions.

The ‘Spirit of the Quad’ lists out a few areas of importance while some more that were on the table have been talked about by senior government representatives of the participant nations. The joint statement begins by tracing the origin of Quad to the massive human tragedy inflicted by the Tsunami of 2004 and in the same breath, addresses the COVID-19 tragedy that continues its ravaging run that began in Yunaan province.

The summit’s commitment to the region and beyond is best displayed by its decision to provide COVID-19 vaccines. In the words of Jake Sullivan, the US National Security Adviser, “with Indian manufacturing, US technology, Japanese and American financing and Australian logistics capability, …. one billion doses to ASEAN, the Indo-Pacific and beyond by the end of 2022.” With the WHO having earned rather deprecating brickbats from member states for its handling of the pandemic crisis, the summit’s call for “transparent and results-oriented reform at the World Health Organization”, is also noteworthy.

In an obvious reference to China and its posturing in the South China Sea, the Quad statement says, “We will continue to prioritize the role of international law in the maritime domain, particularly as reflected in the United Nations Convention on the Law of the Sea (UNCLOS), and facilitate collaboration, including in maritime security, to meet challenges to the rules-based maritime order in the East and South China Seas.”
The other major issues include climate change, critical technologies, counter-terrorism, disaster management and a few more.

As far as critical technologies are concerned, the obvious reference is to 5G and the need to ensure communications of the future are not vulnerable to the Chinese. In fact, the Indian Government came out with a new set of regulations to govern the sector recently that takes into consideration defence and security requirements. The implementation of the regulations may even call for undertaking changes in existing system components that may be used for breaking into networks.

The Quad meeting was preceded by the military takeover in Myanmar and the death of over 138 pro-democracy activists since 1st February coup, according to the UN. In Foreign Secretary Harsh Shringla’s words, “Quad leaders felt that given their strong democratic credentials, it was important to work towards the restoration of democracy in Myanmar.”

The Chinese response to the Quad leadership summit has been quite vocal with the Chinese daily, Global Times publishing a clutch of articles that communicate the Chinese interpretation of Quad being an instrument developed for opposing China’s growth and influence. An article ‘India seeking courtship with Quad a negative asset of BRICS, SCO’ published on 12 March reads, “India has become a negative asset of these groupings. It seems India has failed to understand China’s goodwill. India takes all support from China for granted. It is, in fact, carrying out a kind of strategic blackmail against China.”

The Global Times also made a pitch for drawing greater support of Asian countries for its anti-Quad stance through the screaming headline of its article on 14 March that reads, ‘Quad’s scope too limited to kill `Asian Century’. However, the Chinese definition of the Asian Century when analysed by its actions in the past few years paints a concept of a Century of Chinese Lordship over Asia.

The summit gives the Indo-Pacific partnership between the US, Australia, Japan and India a huge boost. The understanding reached between the four countries significantly enhances the cohesion of the partners. As such, the Chinese response is definitely not unexpected, in fact, it’s understated. The centrality of Quad in the Indo-Pacific is also well defined.

The need to combat the Chinese Belt and Road Initiative (BRI) is also equally transparent. An alternative route for enhancing trade and commerce of IOR countries is also a priority of the Quad.

The Australian Prime Minister Scott Morrison spoke about increasing the ranks of Quad by opening its doors to stakeholders in the region. However, a necessary precursor to such an expansion is Quad establishing itself as a dependable and durable partnership with the intrinsic strength and ability to collectively safeguard legitimate national interests of such countries. Though Quad is not a military alliance, its readiness to field forces to safeguard the interests of such countries is the moot question that the countries of ASEAN and IOR would want an answer to. However, inducting more countries as part of the Quad arrangement could lead to slower evolving of common objectives.

For Quad to rapidly increase its capabilities, such naval exercises as having been planned between the Quad navies and the French Navy, are welcome. The renewed interest of European countries in a free and open Indo-Pacific is also welcome. France has formulated its Indo-Pacific strategy. Netherlands and Germany have followed, while the EU is processing its own. The UK has displayed greater interest in the region after decades of isolation. A common theme that guides most capitals in their approach to Indo-Pacific strategy is a free and open Indo-Pacific. Such convergence of approaches is a major positive.

According to a 15 March Global Times report, the US Defence Secretary Lloyd Austin, made a statement, “Our goal is to make sure that we have the capabilities and the operational plans and concepts to be able to offer credible deterrence to China or anybody else who would want to take on the US.”.

Chinese would want nothing more than the Quad caving in under mounting differences among the members. The fact of the Japanese and Australian economies being linked very strongly to the Chinese does constrain these nations. China is both the US and India’s major trading partner. China will attempt to prise out one or more Quad partners by using its economic clout, primarily. Quad members will also have differences, and these need to be addressed within the group for the relationship to firm up.

Quad’s priority needs to be focussed on generating common threat assessments, improving interoperability of the armed forces through multiple exercises in all domains – land, sea, air and the cyberspace. It needs to share intelligence within the group. Logistics arrangements between the countries need to be strengthened and capacities tested in these exercises. Assets of aligned countries in the IOR need to be built up to be able to provide support to Quad assets operating in their vicinity.

Quad meetings in future could involve interactions with representatives of willing IOR countries and groups, who could be invited. The initiative of providing vaccines to the countries in the Asia Pacific is a huge step and needs to be exercised efficiently. China has been able to regain some ground since the time it was being blamed for the spread of coronavirus sweeping the globe. Quad’s best chance to open the gates to nations across the world lies in providing them with a way out of the global pandemic crisis by provisioning vaccines.

Quad members need to ensure that Chinese companies are kept out of their 5G rollouts. The costs may be heavier, but the security concerns are enormous.

For India and Japan, the two countries with territorial disputes with China, the situation is more tenuous. Especially for India, with an almost 3500 km long border that is yet to be demarcated, the chances of a flare-up are omnipresent. The Indians displayed adequate resolve during the Doklam conflagration in 2017 and the Eastern Ladakh ingress by the Chinese that is presently being resolved. However, India will need to be able to defend its own borders.

For most countries in the region, the fate of Taiwan is directly related to their faith in Quad. The US Commander of Indo- Pacific Command Adm. Philip S Davidson, warned early this month that China could try to take control of Taiwan within six years. Others may argue, it could be closer than that. Either way, it could be Quad’s big test.