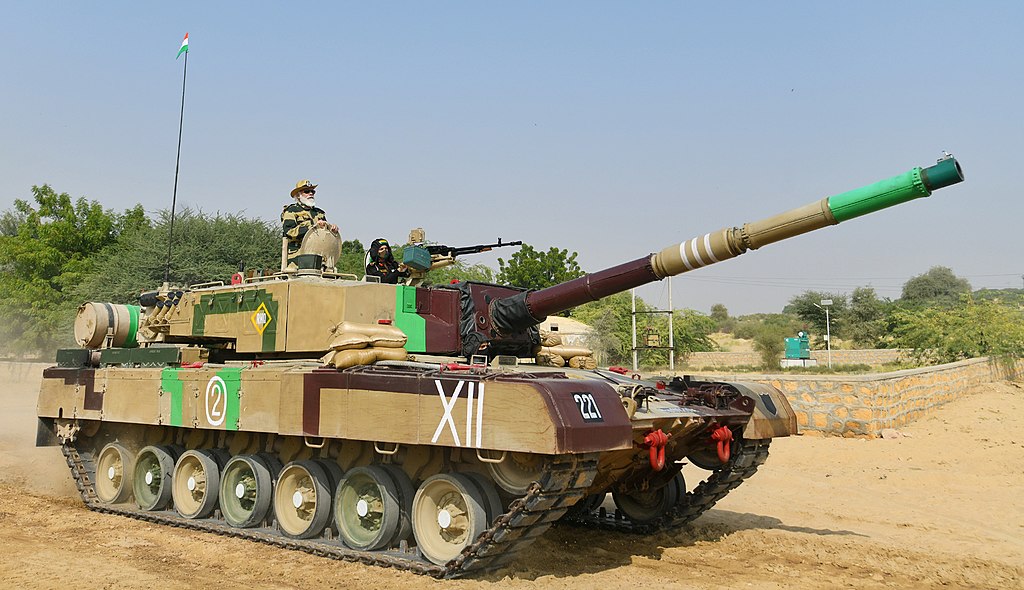 Arjun tank’s performance and the issue of its induction in service has been debated in detail. However, what cannot be denied is the tank is commendable in multiple areas of firepower, mobility, protection and crew comfort. Its weight remains a contentious issue. The project to manufacture Arjun throws up infirmities that need to be addressed in the interactive relationship between the user, DRDO and manufacturing agencies. The author provides a balanced view while suggesting a better model for progressing our Aatmanirbhar Bharat thrust more efficiently.
………………………………………………………………………………………………………………………

The Defence Acquisition Council approval to revalidate the much-awaited Acceptance of Necessity (AON) for procuring 118 indigenously developed Mk-1A Arjun Main Battle Tanks (MBTs) and an associated event on 14 February 2021 wherein the Prime Minister ceremoniously handed over the tank to the Chief of the Army Staff drew interesting comments from various sections of the media. These covered the entire spectrum from the very basic questioning of the wisdom to procure hinging on the operational and logistical constraints along with a huge expenditure tag to the acknowledgement, that it indeed is a potent platform but still may be the last order – a dichotomous statement though ironically not divorced from the truth!

The Indian Army quest for a state of the art MBT has had a tumultuous trajectory to the present configuration which comes with 14 major upgrades and various other improvements driven both by user aspirations and technological developments. The MBT conceived as a replacement for the Russian T-72 aligned to the Eastern bloc philosophy has manifested in a platform avidly adapted to the Western bloc philosophy leaving many operational voids for deployment in the Indian sub-context. Today, as the platform stands, it is a winner in almost all aspects be it firepower, mobility, protection, crew comfort and survivability. These are facts that have been validated and find resonance amongst many defence experts.

But in achieving the above, the critical aspect of operational and strategic mobility has been totally compromised which severely impacts its deployability and restricts the employability to specific terrain. This stems from the overall weight of the tank envisaged to be around 48 tonnes but eventually comes with an additional penalty of about 20 tonnes. So, despite the winners flagged, the MBT is nowhere in a position to be a replacement for any of the existing tank fleet be it T-72 or T-90. There are other related issues of sustenance and cost etc., which come in for severe criticism.

The question which arises is if this was a platform that was being indigenously developed why has it landed in the present form? Has the user been aspirational in almost all aspects demanding, as they say, the “moon” in terms of enhanced protection as in the Western MBTs, while simultaneously retaining equal focus on mobility and speed for higher survivability as in the Russian platforms? Or, has the DRDO incrementally added all features and requirements resulting in the present configuration. The blame has to be squarely and equally shared by both, since if the user has been aspirational and as they say reserve the right to be aspirational, the DRDO should have been candid and upfront in highlighting that the weight parameters would be severely compromised.

Whatever has been done can’t be undone now but there sure are lessons which have been amply learnt and there is an urgent need to look at the way ahead. The Indian Army’s search for the elusive Future Infantry Combat Vehicle (FICV) and the Future Ready Combat Vehicle (FRCV), despite so many years since initiation, is nowhere near even freezing of the Qualitative Requirements (QRs) nor finalisation of the procurement strategy. The recent operational imperatives have brought fore the need for a Light Tank too. So, what should be the way ahead now?

The fact that the DRDO has been able to establish abundant credibility in integrating and designing the Arjun as a potent platform is undisputed and not a myth at all. The issues of sustenance and cost are something that can be addressed with diligence and clarity in defining the scope right at the beginning. Something refreshing which DRDO has brought in as a policy is the early identification of the Design cum Development Partner or the Production Agency which is a win-win situation for all stakeholders. The industry brings its core strengths and with the handholding of the DRDO, the technology transfer and fructification of the platforms can be expedited. The DRDO, therefore, is in a formidable position to undertake any of the projects be it the Light Tank or the future MBT for the Indian Army.

On the part of the User, there is an urgent need to freeze the Qualitative Requirements (QRs). The operational matrix is ever-evolving and so is technology. The need is to incrementally look for enhanced parameters in a defined timeline and numbers. Theatre specific parameters are a reality and shying away from these on operational pretexts needs a hard look. The experience of Swathi Weapon Locating Radar and Akash Missile Systems adequately brings out how successfully developed platforms for plains have been improved and upgraded for deployment at higher altitudes. With every successful platform the confidence amongst the User, the Scientist and the Industry keep growing resulting in enhanced parameters driven by User requirements as also enabled by technological developments. Looking for a singular platform as the only solution which fulfils all parameters, whether it is plains, deserts, mountains, high altitude or the Rann of Kutch is fraught with the risk of protracted trials, delays, not to mention the avoidable cost penalty and failure.

Hence, if the Arjun story is not to be repeated, it’s time that all stakeholders sit together and initiate both the Light Tank and the future MBT projects with clearly defined parameters, timelines and numbers with a long-term commitment to duly factoring and seeking assurance of lifetime sustenance. The distinct advantage of this model i.e., User, DRDO and the Industry together is the facilitation of the spiral development and inherent flexibility in accepting the Qualitative Parameters as they mature. The Services will benefit from expeditious induction albeit maybe Mark 1, scientists are motivated to realise Mark 2 and the Industry partner has sufficient incentive since rollout has commenced. For reasons evident, this is the best option for strategic platforms to be indigenously developed and realise the ‘Aatmanirbhar Bharat Vision’.

Lt Gen Sanjay Verma has immense experience in the field of capability building planning, contract management, acquisitions and procurements both from the Capital as well as Revenue route. His last assignment was Director General Capability Development (Earlier known as Weapons &Equipment) in the IHQ of MoD where he served from 2017-2020.)