China has a near-monopoly in the rare earth metal industry and has positioned it as strategic resources for a diplomatic bargaining chip. Even at one point, it produced 90 per cent of the rare earths the world needs. Today, however, it has come down to 60 per cent and the remaining is produced by other countries, including the Quad. In their first official meeting, as part of the cooperation in critical and emerging technologies, the 4-nation Quad Group also committed to improve resilience in the rare earth industry to reduce dependency on China due to its geostrategic importance. This article traces the progress of Quad collaboration in critical and emerging technologies, including rare earth elements, since their official meeting in 2021 to the recent meeting in Tokyo, Japan.
————————————————————————————————————
The revival of Quadrilateral Security Dialogue – Quad has been perceived as significant to developing a free and open Indo-Pacific (FOIP), to address the security challenges and promote a rules-based order. In the first Quad 2.0 all-leaders online meeting in March 2021, member countries (Australia, Japan, India, and United States) committed to collaborating on multiple levels and proposed concrete solutions for issues like:

The first Quad all-leaders in-person meeting in September 2021 discussed the progress of their commitments made in the online meeting and plan more initiatives. The vaccine diplomacy under the Quad vaccine experts’ group reflected the effective collaboration of Quad members in dealing with the pandemic. It was agreed to establish resilience in clean energy supply chains like clean hydrogen and launch a Quad green shipping network, to develop their climate-focused cooperation. In the Critical and Emerging Technologies, the Quad members planned to launch a semiconductor supply chain initiative; Open RAN policy coalition to support 5G deployment and diversification; and cooperate in critical technologies like biotechnology, genome sequencing and genome manufacturing.

It was Chinese geopolitics that alerted the world, but the politics around the rare earth sector has been a significant part of international relations throughout history. With the Chinese monopoly in the value chain, the Quad members realised the need to strengthen their rare earth extracting, production and processing capacity. At the individual and bilateral level, the Quad members have already been investing in rare earth and critical elements.

The Molycorp Corporation, the leading US company, has been working to improve the production capacity, but it’s limited to the upstream sector. In A 1,250 feet tall mountain called Round Top, in the barren scrub of far West Texas, 85 miles east of El Paso, could enhance American self-sufficiency in critical minerals. The mountain contains five light and ten heavy rare earth; mostly neodymium and dysprosium, and all five permanent magnet materials. The acquisition of the neodymium iron boron (NdFeB) permanent magnet production equipment has been announced by the US Rare Earth in North Carolina by Hitachi Metals America Ltd., which can produce 2,000 tons per year of rare earth magnets. However, the domestic manufacturing capacity of the US is low which has been the reason for its continued dependence on China.

Pini Althaus, CEO of US Rare Earth, said, “The risk has been well-established since President Xi’s not so veiled threat last year during his visit to a Chinese rare earth facility announcing, potential bans on rare earth exports to the US as a trade war retaliation.” He further said, ‘from a national security standpoint, having the US military rely on China for rare earth for their fighters and Tomahawk cruise missiles is just not prudent. And there is also the high-tech world and US manufacturing to think about.”

In the first week of June 2021, the US Senate passed a law to improve the competitiveness of America by improving the critical mineral supply chains. Sameera Fazili, Deputy Director of the National Economic Council, said that the US is aiming to boost its production and processing of rare earth along with building allies to increase the sustainable global supply and reduce reliance on competitors.

Australia’s Lynas corporation is second largest producer of rare earths after China, thus can play a key role in reducing rare earth reliance on China. The Lynas Corporation of Australia began to develop its production capacity since 1983, but conducted its first mining campaign in 2008, and developed the Mount weld mines deposits. However, the company could not handle the burst out of the market due to the Senakaku-Island crisis between China-Japan in 2011. In 2014, it redeveloped by establishing collaborations with US and Malaysia. As part of its collaboration with Malaysia, Australia’s Lynas Corporation began investing in Malaysia’s $800 million rare earth processing plant, which can become the world’s leading processing facility and a challenge to Chinese monopoly, if it becomes operational. However, the increasing environment-related concerns of the regions near the east coast pose an obstacle to the planning of the Australians. For instance- Nicholas Leadbeater, a chemist at the University of Connecticut, said “as the world’s hunger for these elements increases, the waste is going to increase. The more mines there are, the more trouble they are going to be.”

Japan has been mostly dependent on the Chinese rare earth supplies and thus faced serious problems after an embargo following the Senkaku island dispute with China. Unlike other major players, Japan doesn’t have any rare earth reserve capacity and thus requires either diversifying its rare earth procurement sources or finding alternatives. Japan has been investing in multiple RE projects in different countries like Australia, the USA, Canada, India, Jamaica, Kazakhstan, and so on. The most important investment is in the Lynas’ Mount Weld Project in Australia. The Japanese company Mitsubishi Chemical is working on a cleanup project worth $100 million in the Bukit Merah rare earth processing site in Malaysia. Besides the investment, Japan is also attempting to develop alternatives to rare earth that would reduce its dependence.

India has 6 per cent of the world’s rare earth reserves but produces only 2 per cent of the total rare earth oxides globally. In India, certain REEs are present in large quantities such as Lanthanum, Cerium, Praseodymium, Neodymium, Samarium, Gadolinium, Yttrium, and Dysprosium oxide. However, these elements become useful only with the valorization and eco-system around them. The growth of the Indian rare earth industry is noticeable since the 1950s from engaging in purely mining efforts to the setup of separation plants PRYNCE and HERO by the Indian Rare Earth Limited (IREL). The production of carbonate and oxalates that further get converted to oxides are the preliminary separation products of the Indian rare earth industry. The Beach sand minerals found majorly on the coasts of Kerala and Orissa include monazite and rare earth elements, which further gets operated and separated by India Rare Earths Ltd (LRE) and Kerala Minerals and Metals Ltd (KMML). In 2012, the Geological Survey of India made the exploration of rare earth a high priority for its next five-year plan, considering its usage in the modern electronic technologies that depend on rare earth. The Atomic Minerals Directorate, a unit of India’s Department of Atomic Energy, is at the heart of exploration in India since the monazite sands were discovered from which radioactive thorium and uranium are extracted. 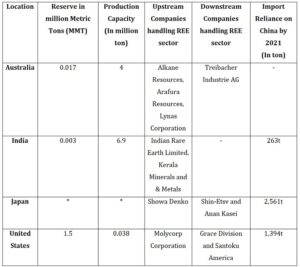 In 2019, the rare earth corporations of the US and Australia formalized their unofficial partnership to develop new critical mineral sources that include rare earth, cobalt, and tungsten. The deal was signed between Geoscience Australia and the United States Geological Survey (USGS) as part of which both countries would launch-related initiatives, for instance- The Critical Minerals Strategy and Critical Minerals Facilitation office was opened by Australia in 2020 as part of the deal. The US and Australia agreed to collaborate on the supply of rare earth materials that are critical in the production of clean energy technology such as electric vehicles.

In the same year, Australia signed a cooperation agreement with India. The Indian Rare Earth Limited also has collaborated with Japan to set up Toyotsu Rare Earths India in Vishakapatnam for extraction and processing of rare earth oxides from monazite. Japan is investing in Australia’s rare earth corporation, India’s Indian Rare Earth Limited and Beach Monazite Placers of Kerala. Japan and Australia investing in the Lynas Advanced Materials Plant (LAMP) of Malaysia. India and It should also be noted that the monopoly of China has been falling sharply in the past decades, with its reserve share reduced from 70 per cent in the 2000s to only 38 per cent in 2020, and production capacity has declined from 58.3 per cent in 2020 from 81.4 per cent in 2016. In this case, the initiative by Quad members has been gaining the potential to challenge the monopoly of China. In order to maintain its monopoly under these falling trends, China has begun to invest in the rare earth mines of countries like Myanmar, Madagascar, Greenland, Pacific Ocean, Afghanistan and other possible sites.

The trilateral Supply Chain Resilience Initiative (SCRI) of India-Japan-Australia launched in April 2021, emphasizes the need to provide better opportunities for stakeholders and diversify the supply chain. The SCRI aims to create a virtuous cycle of enhancing supply chain resilience to eventually attain strong, sustainable, balanced, and inclusive growth in the region.

In the Quad’s leaders’ first offline meeting of September 2021, members agreed to intensify their cooperation to secure the critical infrastructure with Australia having a major role to play, being the second-largest supplier of rare earth after China. The US convened a Summit on Global Supply Chain Resilience on 31 October 2021 on the sidelines of the G20 Summit in Rome that was chaired by President Biden. The semiconductor supply chain Initiative was also launched considering the shortage caused due to geopolitical conflicts, pandemics, and cyber crises. US and Japan are already leading in the facilities of semiconductor facilities, to which India also joined with its Union cabinet approving Rs 76,000 crore incentive scheme for semiconductors in December 2021.

As part of Quad- Plus initiative to expand its horizons, Australia signed an agreement with South Korea for critical mineral cooperation in December 2021, which got extended to a critical mineral-based economic collaboration between South Korea-Quad in February 2022.

Besides other issues, the recent Quad meeting in Tokyo on 24 May 2022 again discussed and acknowledged the importance of harnessing critical and emerging technologies by launching the ‘Common Statement of Principles on Critical Technology Supply Chains’. As part of the common statement, four principles of critical supply chain security were shared- Security, Transparency, Autonomy, and Integrity.

A positive progress in cooperation among Quad members in the committed areas was visible, last year. The Quad members’ initiatives have a great potential to reduce not only their’s but global dependency on China for critical minerals supply. However, the cooperation needs to move more towards the practical achievement of critical minerals processing capacity both among Quad and Quad plus members. Such progress should unfold in the next few years.