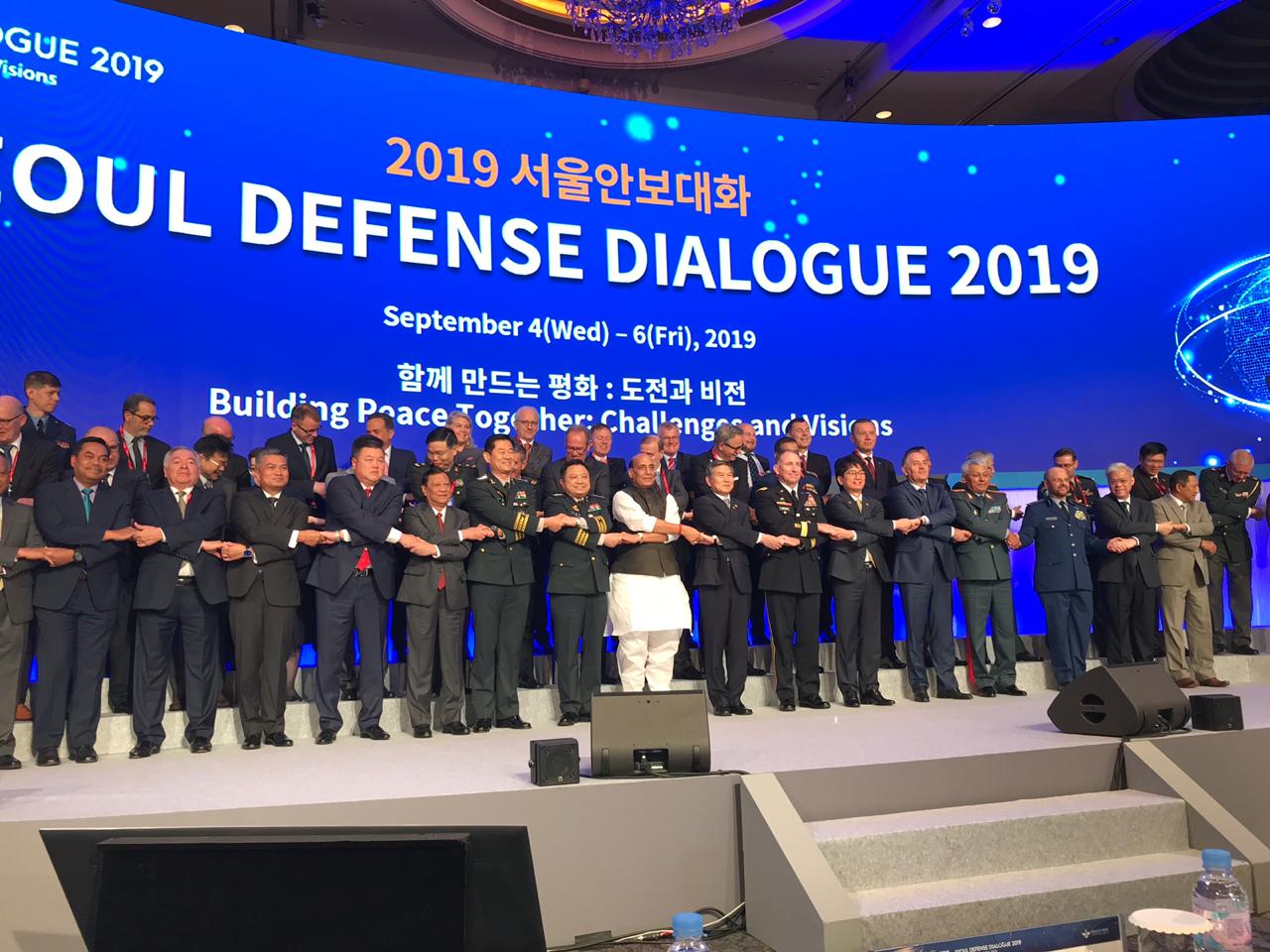 This is the full text of the keynote address by Raksha Mantri Rajnath Singh at Seoul Defence Dialogue – Building Peace Together – Challenges and Vision: 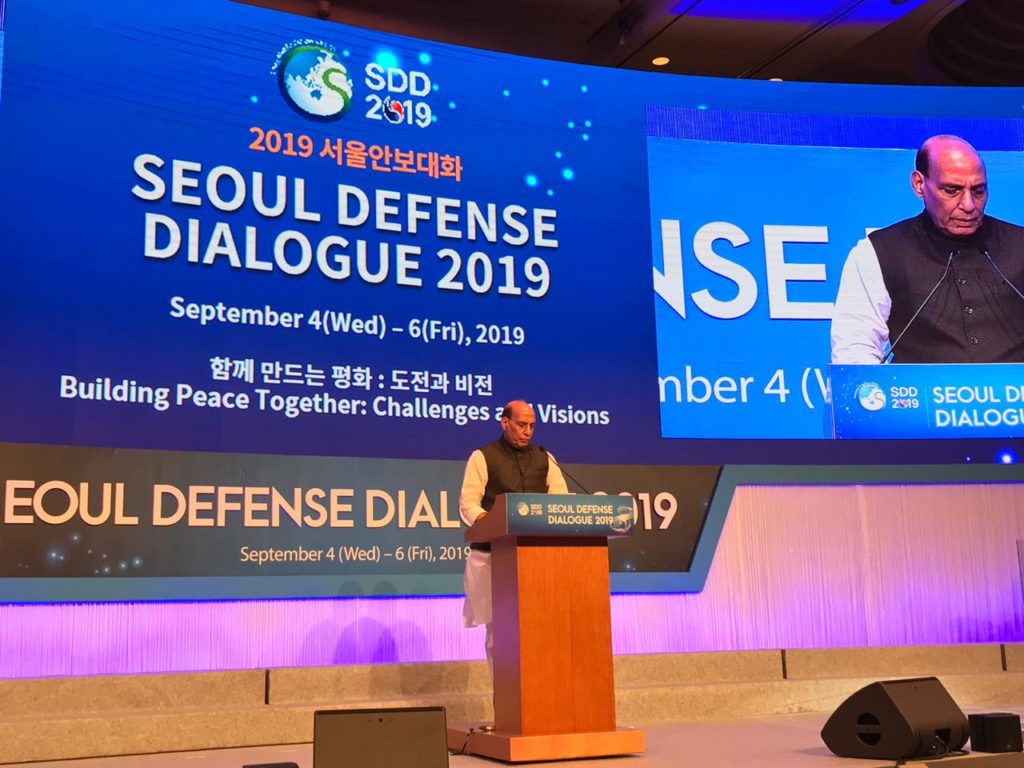 Your Excellency Mr Lee Nak-yon, Prime Minister of the Republic of Korea

​I thank the Government of the Republic of Korea for inviting me to speak at this prestigious multilateral security dialogue, a forum that offers a sound platform for discussions on the pressing defence and security issues that face the world today.

​It is a privilege to be here on my first visit to Seoul. The region has been a part of India’s national consciousness for millennia. We have ancient cultural links. Buddhism spread from India to East Asia and was introduced in Korea over 2000 years ago. Our people are linked through family ties that can be traced to the legendary Queen Heo Hwang-ok, who travelled all the way from the Indian kingdom of Ayodhya to marry King Suro of Gaya in present day Gimhae. These linkages form a strong underpinning for our contemporary ties, which are at an unprecedented level today.
​The spectacular progress made by the Republic of Korea over the past few decades has been a source of inspiration for us in India. We deeply admire your achievement in becoming one of the world’s leading economies, while retaining your strong cultural identity. We see Korea as a key partner in India’s economic transformation. The synergy that we see between India’s ‘Act East Policy’ and Korea’s ‘New Southern Policy’ has further strengthened our Special Strategic Partnership.

​The Dialogue’s theme this year of ‘Building Peace Together: Challenges and Vision’, is a fitting theme for us to reflect upon at this time and place. South Korea is at the forefront of crucial thinking and policy formulation on the peace process in the peninsula, a process that has the potential to change the course of history.
​The visionary steps undertaken by President Moon Jae-in have reversed the course of history in the peninsula and today we are exploring possibilities for peace that would have been unimaginable in the past. As we approach the first anniversary of the Pyongyang Declaration, it is time for us to reiterate our commitment to the path of peace. We in India have always supported all efforts to bring about peace and stability on the Korean Peninsula and its denuclearization through dialogue and diplomacy.
​ The US-DPRK Summits and the Republic of Korea- DPRK Summits have been positive developments in this regard. We hope that these initiatives will pave the way for denuclearization and lasting peace and stability on the Korean peninsula and also address proliferation linkages relating to nuclear weapons and delivery systems, which have negatively affected security.

​World politics today is in a state of flux and this has aggravated global and regional challenges to international peace and security. Globalization is under stress due to new and emerging geo-political and geo-economic faultlines. New and emerging technologies have also left an impact on the regional as well as global security environment. Technology too is open to misuse more than ever before, as evident in the spike in cyber fraud, threats to critical infrastructure, and the potential to use the darker side of Artificial Intelligence, IOT and Big Data for nefarious purposes. Our region is confronted with numerous traditional and non-traditional security threats such as terrorism, conflicts, transnational crimes, maritime threats, proliferation as well as the challenges of sustainable development, including the lack of energy, low intra-regional trade and lack of connectivity.

Of the numerous security challenges that we face, the gravest is that of terrorism. We must understand that no country in the world today is safe from terrorism. India has been actively pursuing counter terrorism cooperation bilaterally, as well as regionally, through regional forums and globally, through the UN and other international forums. It is only through collective action that we will be able to disrupt terror organizations and networks, identify and check the perpetrators, and also take strong measures against those who support and finance terrorism and provide sanctuary to terrorists.
Ladies and Gentlemen,
​Our quest for common prosperity and security requires us to evolve a common rules-based order for our region, the Indo-Pacific region. This order must be based on sovereignty and territorial integrity and equality of all nations, irrespective of size and strength. These rules and norms must be based on the consent of all. We must provide to all nations the right of equal access to the use of common spaces on sea and in the air. As a nation that has been at the maritime crossroads for centuries, we in India comprehend the benefits of connectivity, and the benefits of responsible utilization of the wealth of the oceans for shared benefit. To this end, we have strengthened our cooperative engagements in the Indo-Pacific region on the basis of the principle of “SAGAR – Security and Growth for All in the Region”, a principle that remains the cornerstone of our outlook for the Indo-Pacific region. We advocate an open and inclusive architecture for the Indo-Pacific region, with ASEAN centrality, equal access to the global commons, freedom of navigation in the seas and in the air and unimpeded commerce, the importance of connectivity, a rules-based order and dialogue as the means to resolve disputes.

​We have supported initiatives aimed at enhancing cooperation in the region and have been participating in regional organisations such as EAS, ARF, ADMM Plus and EAMF. These organisations play a vital role in evolving a balanced, open and inclusive framework for Asian and non-Asian Partners to interact and cooperate in addressing security challenges.

​India has been among the first responders in Humanitarian Aid and Disaster Relief (HADR) situations in the region, from Fiji to Yemen. Recently, the Indian Navy conducted HADR operations in the aftermath of Cyclone IDAI that hit Mozambique in March this year. We understand that all HADR events are different, and pose their unique set of challenges. India has therefore adopted a flexible approach, wherein the assistance is tailor made to the needs of the recipient country.
​It is in this context that we have decided to launch a new initiative, that of a Coalition of Disaster Resilient Infrastructure (CDRI), aimed at creating a pool of trained volunteers in a global movement to help countries deal with disasters. We will be bringing this initiative to the UNGA later this month.
Ladies and Gentlemen,

The dawn of the Asian Century is nigh. It is up to us in Asia to make this a century of peace and development, a century of holistic socio-economic development, a century where we tackle the common challenges of poverty and disease, of illiteracy, of terrorism. It is up to us to preserve our pluralistic values of language, culture and tradition. There is room enough now for all the countries of Asia to prosper together and it is the Asia of cooperation that will shape this century. Our rise and prosperity hinges on how well we work together to build the foundation for our future, and how well we respect the principles of pluralism, co-existence and dialogue that have always characterized us. If we work together on the basis of the five principles that have characterized Indian thought and policies for centuries – the principles of Samman (respect), Samvad (dialogue), Sahayog (cooperation), Shanti (peace) and Samriddhi (prosperity), our success is assured.

​India’s choices at home and its international priorities form part of a seamless continuum that are firmly anchored in its transformational goals. Good relations with neighbours – both immediate and extended – are a priority for India’s foreign policy as part of its Neighbourhood First Policy. A key feature of India’s Neighborhood First Policy is also its engagement with its neighbors in sub-regional groupings of IORA and BIMSTEC, apart from a trilateral maritime cooperation format with Sri Lanka and Maldives to improve Maritime Domain Awareness and cooperation.

​Defence diplomacy is a key pillar of India’s strategic toolkit. In fact, defence diplomacy and maintaining strong defence forces are two sides of the same coin. They go hand in hand. India has never been an aggressor in its history nor will it ever be. But that does not mean that India would balk at using its strength to defend itself.

Ladies and Gentlemen,
​The strong currents towards peace that are present in the peninsula, will usher in a new wave of prosperity when they materialise. The path has been set and we need to remain committed irrespective of the bumps that we may encounter along the way. I am optimistic about the outcome as along as all the concerned parties are committed to building peace together. I bring with me the wishes of the 1.3 billion Indians for everlasting peace on the Korean peninsula. India will stand shoulder to shoulder with Korea in its quest to break free from the shackles of the past and achieve true peace and harmony.

​India and ROK play a stellar role in bringing about peace, progress, prosperity, riding on twin pillars of economic and security partnership. Our bilateral cooperation can be instrumental in the following:
– Ensuring rules based order in the region;
– Fighting terrorism, piracy, proliferation and transnational crimes;
– Collaboration on issues such as HADR, Cyber Security and other maritime related threats;
– Seek to align and coordinate regional maritime capacity building/security assistance efforts.

We are at the right time in history to achieve peace. This year marks the 150th Birth Anniversary of Mahatma Gandhi. As we deliberate upon ways to build peace together, we can be guided by Mahatma’s values and teachings on peaceful coexistence and non-violence in our attempts to build broad-based global collaborative structures that promote pluralism and equality.

Ladies and Gentlemen,
I wish to convey my best wishes to the Minister of National Defense, Republic of Korea, for a successful & fruitful conduct of the Seoul Defence Dialogue 2019. 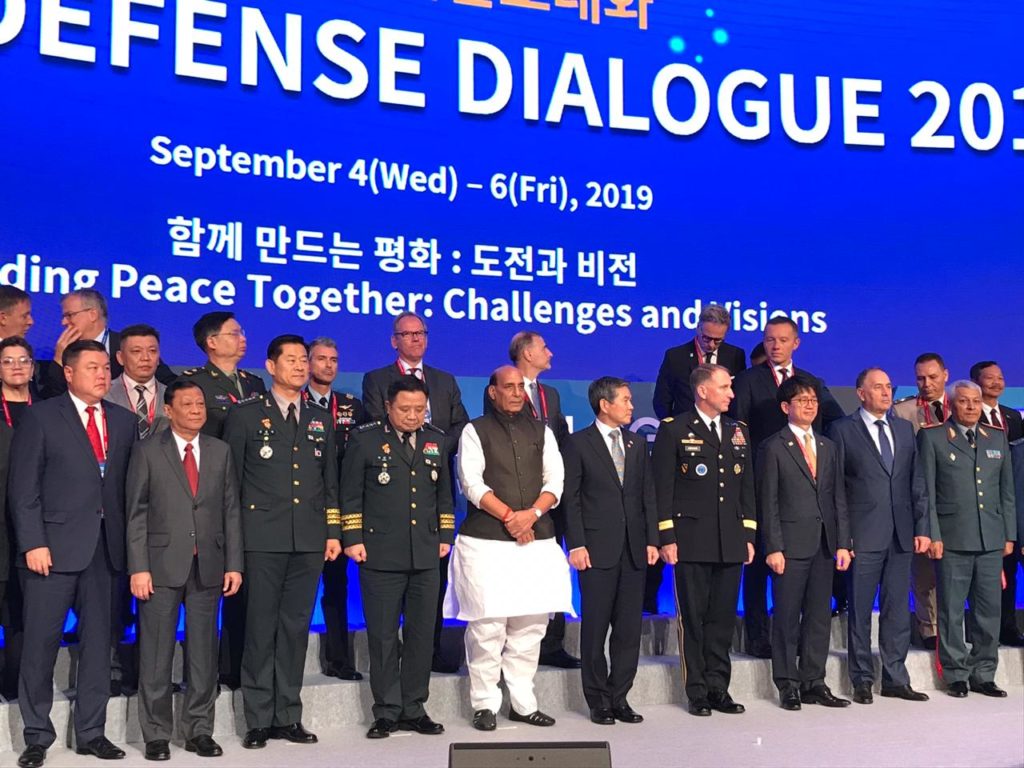