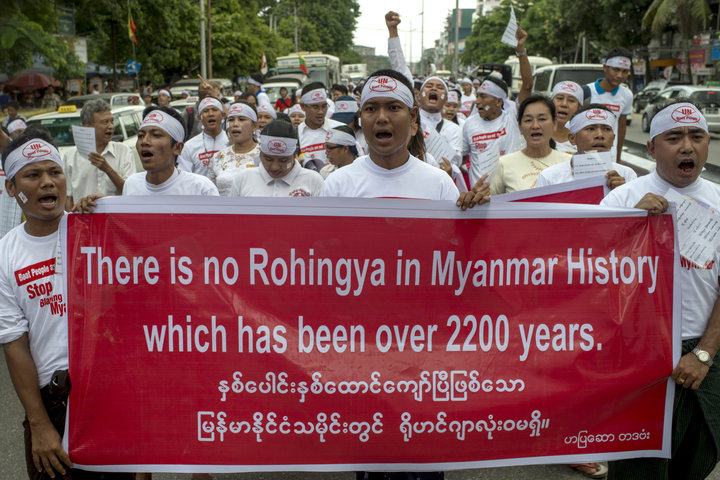 YANGON, BURMA - MAY 27: Buddhist nationalists demonstrate against the UN and the return of Rohingya Muslims May 27, 2015 in Yangon, Burma. Radical Buddhist nationalists protest the international pressure on Myanmar to accept the repatriation of persecuted Rohingya boat refugees. (Photo by Jonas Gratzer/Getty Images)

A huge humanitarian crisis is playing out in South Asia with barely a whimper, globally. Thousands of Rohingya Muslims are crossing over into Bangladesh with the Myanmar Army having launched an operation in the Rakhine province. They are living in the most precarious condition without adequate food, medicine or basic comforts. The chances of epidemic are increasing by the day. The author provides a glimpse of the issues involved and debates a few options available.

Bangladesh has warned Myanmar of unwarranted consequences to provocative acts by Myanmaris aircrafts of violating Bangladeshi air space. The warning further deteriorates a tenuous relationship already under stress because of the ongoing refugee crisis. Bangladesh has become home to over four hundred thousand Rohingya Muslims after the crackdown by the security forces of Myanmar. Rohingya insurgents had attacked almost 30 police posts and an army camp killing over a dozen people in August 2017. The rush across the Bangladesh borders intensified with India refusing to be a home to Rohingya Muslims. India is already burdened with nearly 40,000 Rohingya Muslims of whom only 16500 are registered with UNHCR. India has stated that it is keen to deport all of them as they are a security risk. The Government of Arunachal Pradesh is facing a dilemma as to how to cope with the grant of citizenship to Chakma and Halong refugees who have over the years grown from 5000 to 53000 in the three districts of Tirap, Lohit and Subansari. In this regard, the Chief Minister stated that while complying with the orders of the Hon’ble Supreme Court, “I solicit your support in protecting the tribal rights and securing the sanctity of the Inner Line Permit (ILP) in Arunachal Pradesh.” Meanwhile, 5000 Chakma refugees remain inTripura and refuse to go back fearing persecution.

The stand taken by India is that it would want to deport the Rohingya refugees based on its experience with refugees earlier that led to strain on limited resources and demographic changes causing law and order problems. The present crisis is also linked to security issues.

The Government of India wants a political solution to the ongoing crisis since Bangladesh is facing a terrible strain in accommodating and feeding the refugees on 2000 hectares of land allotted for the Rohingyas by Bangladesh.

In an ongoing case in the Supreme Court against the deportation of Rohingyas, the Indian government has submitted a detailed affidavit. However, it is generally accepted that since many Rohingya refugees have links with the Islamic State and Pakistani ISI, plans to deport the Rohingya refugees is more a policy decision and the courts should desist from interfering.

The Government also accepts that some of these illegal immigrants have procured Aadhar and PAN cards through a nexus operating in the border states and their stay will deprive the Indian citizens of their legitimate share of resources. The pressure of 10,000 Rohingya refugees in Jammu is being felt adversely. These refugees have found their way to Leh also but despite the support from Zakir Musa of al Qaeda, they have not ventured to settle down in the Valley.

The security concerns of the Indian nation are different from what they were in 1971 when India gave humanitarian shelter to nearly 10 million East Pakistani refugees. The resurgent nationalist sentiments in Buddhist Myanmar and Islamic sentiments amongst the Rohingyas are the root causes of the present crisis.

Bangladesh High Commissioner to India Mr Muazzem Ali has had numerous interactions with the Indian Foreign Secretary Mr S Jaishankar to prevail upon Myanmar to stop the violence and control the refugee influx. Meanwhile, Bangladesh PM Sheikh Hasina had assured the refugees that Bangladesh would continue to provide humanitarian assistance to them before she left Dhaka to address the annual UN meet in New York. India is helping the Bangladesh Government with relief measures to help tide over the crisis.

The Bangladesh Government, despite its stated stand to help the refugees, has started regulating their entry into border areas with a view to prevent spreading of an epidemic. The camps are overflowing with refugees beyond their capacities and hundreds of thousands of children requiring immunization against Measles, Polio and Rubella.

Rohingyas are not Myanmar citizens under the Myanmar citizenship laws of 1982. The Myanmar Army is bent upon avenging those Rohingya militants who attacked the police posts and army camp on August 25, 2017. They reiterate that Rohingyas were never Rakhine residents but are Bengali Muslims who have migrated. Some of them have turned militants in a purely peace loving Buddhist majority state. The world has condemned the atrocities committed by the Myanmar armed forces and want Aung San Suu Kyi to enforce policy changes. Myanmar has never accepted Rohingyas as an ethnic group and has referred to them as Bengali Muslims.

India supports the Myanmar Government in its endeavour to go after ARSA (Arakan Rohingya Salvation Army) or any other insurgent Rohingya group. India is desirous of a political solution to the ongoing refugee crisis, while it opposes the act leading to pushing Rohingyas into Bangladesh or any other country. India is also concerned with Pakistan attempting to exploit the Rohingyas for terror activities using its notorious ISI or various militant organizations operating from its soil. Bangladesh is itself battling terrorism and is deeply concerned about further radicalization by terror outfits of these impoverished Rohingya Muslim immigrants.

Cox’s Bazar is the homeland to thousands of Rohingya Muslims fleeing every day to Bangladesh. The makeshift camps are pathetic and an epidemic may break out anytime. India is supplanting the efforts of Bangladesh Government and UN agencies by providing drinking water, food packets to prevent shortages.

Restraint by ‘Tatmadaw’, the military as is known in Myanmar, is a must for the situation to ameliorate. The Myanmar Army is largely composed of Myanmaris Buddhists who do not understand the local language of the Rakhine province. In the past, the Japanese methodology of ‘Sanko Seisaku’, resulted in migration of 50 percent of Rohingyas from the Rakhine province comprising of a million plus Rohingyas, then. Besides migrating by land to Bangladesh and India, some migration was undertaken by boats to Indonesia, Malaysia and Thailand.

UN Secretary General Antonio Guterres has termed the present crisis as a ‘’humanitarian catastrophe”, UN Human Rights Chief Zeid Ra’ad al Hussein has called it, “A textbook example of ethnic cleansing … the international community has labelled Rohingyas as the most persecuted minority in the world’.

Myanmar’s de facto leader Aung San Suu Kyi has condemned all human rights violation and maintained that the attacks on police outposts in August were by terrorist and she does not fear international scrutiny. She further stated that she is prepared to start a refugee verification process for those who wish to return from Bangladesh. She promised to restore peace and stability and bring harmony in Rakhine communities, in her address to the nation on 19 September, breaking her long silence.

India is not a signatory to the United Nations Convention on the Status of Refugees ,1951, which prohibits deportation to a country where they are not safe. What is alarming is the deep rooted radicalization of the Rohingya Muslims. Pakistan based terrorist organizations have given a call to raise a Jihadi army comprising 100,000 volunteers in support of Rohingyas. 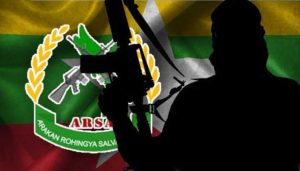 The Rohingya crisis is both a humanitarian and security issue. The terror links of ARSA to foreign terror groups is a cause of concern not only to India but also to Bangladesh and Myanmar. That is the reason for India taking a strong stand to deport the illegal Rohingya Refugees and Bangladesh starting registration of the Rohingya population.

The softening of the Myanmar Government is a step in the right direction to resolve the Rohingya humanitarian crisis. Rohingyas need to ensure that they do not get influenced by the misguided among Rohingyas wanting an Islamic state and denounce the terror links of some amongst them. The Rohingyas must learn to live peacefully in Rakhine and consider themselves as Myanmaris first always and every time, and not Bengali Muslims .

Lt Gen Sanjay Kulkarni was commissioned into 4 KUMAON in 1977. In his illustrious career of 39 years, he served in various types of terrain and participated in Operation Polar Bear and Operation Meghdoot, as a Captain in 1983 and in 1984. For leading his Platoon to unfurl the National Flag on Bilafond La he was decorated with Shaurya Chakra.