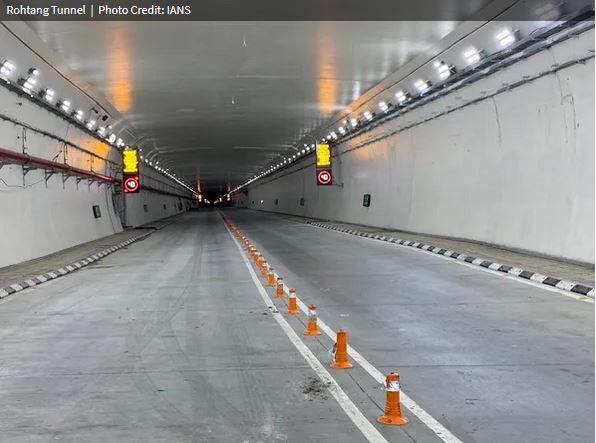 Manali (Himachal Pradesh): One of the world’s most challenging and a marvel of engineering motorways — the Rohtang Pass highway tunnel — in the Himalayas is strategic as it will bring the Indian Army with its T-90 tanks and infantry combat vehicles closer to the Line of Actual Control, project engineers said on Friday.

It is all set to be inaugurated by Prime Minister Narendra Modi on October 3.

The 9.2 km-long horseshoe-shaped single-tube, two-lane tunnel — the world’s longest motorable tunnel at over 3,000 metre above the sea level, is coming up under the 3,978 metre Rohtang Pass in the Pir Panjal range some 30 km from here in Himachal Pradesh.

“The all-weather tunnel can take any military traffic, even armoured vehicles,” an official aware of the development told IANS.

However, the all-weather road to forward areas of Ladakh requires more tunnels, either at Shikunla or at the high passes located on the 475-km Manali-Leh road for round-the-year connectivity.Read more…