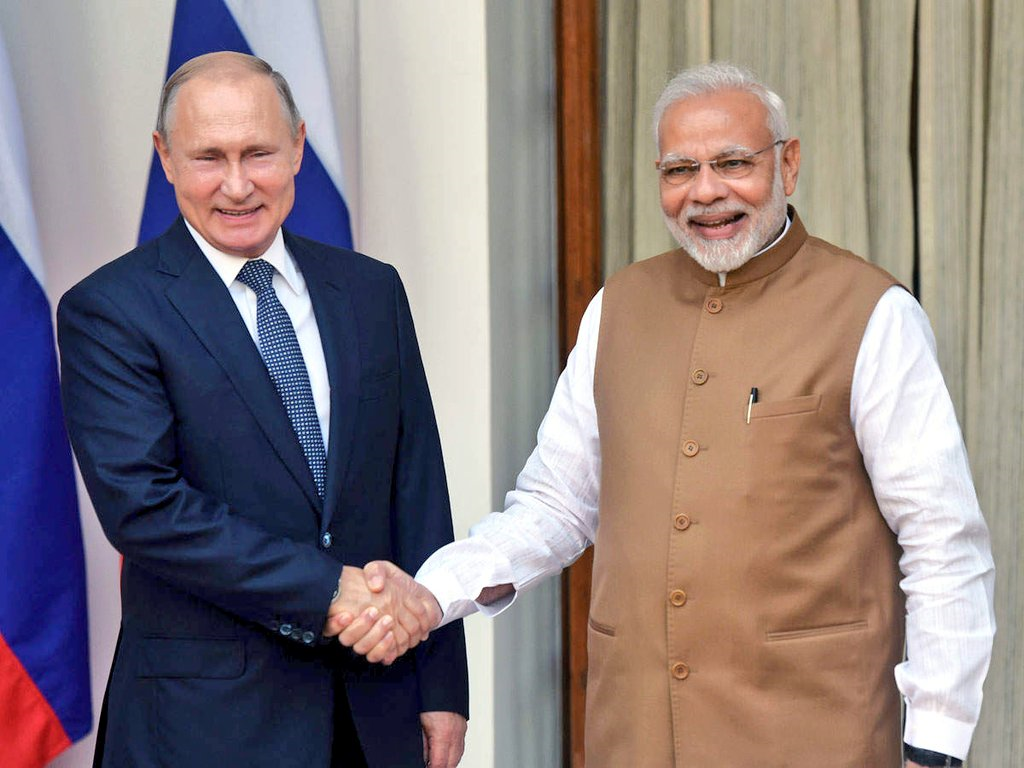 The thick clouds over the Indo-Russian relationship largely dissipated when the S 400’s induction became as good as a done deal. However, other issues remain that need diplomatic finesse to keep the relationship firm and stable. Russia’s growing relations with China, and even Pakistan, are issues that along with Afghan stability, are some of the areas that merit better understanding between the two countries.

The relationship between India and Russia is special and the Strategic Partnership is privileged. The relations are unique, confiding and mutually beneficial by nature, encompassing all possible areas of cooperation. They are based on similar civilizational values, time-tested friendship, mutual understanding, trust, common interests and proximity of approaches to the fundamental issues of development and economic progress. That is what the MEA states on its website. To strengthen this relationship, the 21st India-Russia Annual Summit between President Putin and Prime Minister Narendra Modi will be held on 06 December 2021 in Delhi. There will also be a 2 + 2 dialogue between the defence and foreign ministers of the countries just as it was with QUAD countries. What is significant about this summit? After all it has been held for two decades before this on an annual basis. The difference is the changing geopolitical environment.

In the period between 70’s and 2000, things were far different. India and USSR/Russia were on one page in almost all respects. Who can forget the staunch military, diplomatic and political support from Russia which enabled India to dismember Pakistan? Who can forget the equally staunch US support to Pakistan in 1971? Nor can one forget, Pakistan midwifing Kissinger’s secret visit to China in July 1971 which paved the way for the Sino- USA rapprochement in 1972. The divisions and alignments were clear; India and USSR on one page and USA, China and Pakistan on another. Both pages opposed each other. Then the USSR collapsed. China became surreptitious and predatory. Pakistan became toxic. The strategic construct of the last century withered away. A new one has now emerged.

Geostrategic alignments of this century have evolved with the dramatic collapse of the Twin Towers, meteoric rise of China, and unseemly US withdrawal from Afghanistan. These are far different from the earlier ones. Old friends are new enemies and old enemies are new friends. USA and India, at loggerheads with each other in the 70s are in a strategic partnership which is supposed to define the 21st century. Equally Russia and China once, wary adversaries, are in an unprecedented cooperative partnership which is one step away from an alliance. The waning superpower USA is at loggerheads with the wannabe superpower China and used to be superpower Russia. Pakistan and USA have moved from being Non-NATO allies to stand on the brink of a strategic divorce. Then there are other players who are in the ring like Japan, Koreas, Iran, EU, France , UK, and Saudi Arabia who have stuck largely to their old stances while dilly dallying with new ones.

Amidst all this changing kaleidoscope, two relationships have survived. The Indo- Russian relationship keeps going on like a historical relic – significant but not defining. The Sino – Pak vs Indian relationship is like old bitter wine in a new bottle getting even more bitter and poisonous. It is in this context that the Indo Russian relationship needs understanding. It is critical to India and the world in many ways.

The bulk of the weapon systems of the Indian Armed Forces have been of USSR/Russian origin. The majority of the IAF fleet is still MIGs, Sukhois and MI series of helicopters. The Navy has a predominantly Russian lineage – aircraft carrier, nuclear submarine, missile boats, stealth frigates et al. The main equipment of the mechanised forces of the Indian Army have traditionally been Russian – T55, T72, T90 and BMP. A major factor which should never be forgotten is that Russia has always given to India, cutting edge weapon systems when others have denied them. One can go on.

While there are efforts at ‘Atmanirbharta’, it has to be understood that once a weapon system is introduced into service, it stays put for at least three decades. For those three decades and beyond, there are day-to-day issues of spares, repairs, upgrades, life extensions, maintenance and so on. Hence, inter-dependency builds up. India depends on Russia to maintain its defence capability. Russia depends upon India to shore up its flagging economy. While new Sino-Russian and Indo-US equations might look like five star menus, the Indo-Russian equation is the everyday ‘dal roti and subzi’ menu without which existence is impossible. This interdependency has got a life extension with the acquisition of the S 400 air defence system by India. Viewed from this perspective, both countries have been trusting each other for over five decades and are not about to get away from each other in a hurry. This mutually beneficial relationship has a long way to go.

Apart from the defence sector, India and Russia have a lot of common interests in energy exploration especially with the Arctic Circle opening up. They also share interests in space based research. Very importantly India and Russia need each other in stabilising Afghanistan. After all an unstable Afghanistan dominated by Pakistan is a problem for both in their respective regional outlooks. A Russo-Indian- Iran joint approach will go a long way to stabilise Afghanistan rather than leaving it to a devious Pakistan. Very importantly, Russia and India have a lot of common ground to cover in the fight against Covid. India and Russia also have a good equation with Myanmar. If both the nations put their shoulder together, a reasonable end state can be brought about in Myanmar

A very major issue is that both Russia and India are in new strategic relationships with bigger powers – China and USA respectively. Potentially it puts them on opposite sides and at cross purposes with each other. However these new relationships are so far not stress tested and are more of the ‘cash and carry’ kind.

While much is made of the Indo – US equation and QUAD, it is a moot point if USA can be trusted fully. Its track record in dealing with its partners and allies has been poor. The way France was treated during the formation of AUKUS is a case in point. Its propensity to carry out FONOPS in the IOR without grace, its initial reaction to the second wave in India or its lecturing India on democratic values leaves much to be desired in a strategic partnership. Similarly, the Sino-Russian equation though apparently flourishing, is one of mutual convenience and not due to shared values or anything close to that. In such conditions, India and Russia are hedging their bets with their major partners. At the same time they are simultaneously, the escape valve and bridge between heated adversarial equations of this century. There is much more than meets the eye in this partnership of global balancers. At the end of the day, India should look to its interests and a strong Indo-Russian partnership is important from any direction one looks at it.

Understandably, USA is not comfortable with a strong Indo-Russian equation and is trying hard to wean us away. However there are two problems with the US approach. The USA does not give India the degree of assurance or comfort that it will be an effective alternate to Russia. Its internal politics will not allow that since the Pakistan lobby in the USA will lean hard to block the partnership from growing beyond a point. Hence there will always be an ‘iffyness’ about the American approach. The other problem is that in case USA undermines the Indo-Russian equation and it does not step up to replace Russia, then India is weakened. A weakened India is detrimental to US interests in its contestation with China. This is something that USA loathes to understand. Forget US interests, a weakened India is unacceptable to Indian interests and is unimaginable. That is something which needs to be conveyed to USA regularly.

There is also some concern regarding the growing ties between Pakistan and Russia which are being actively encouraged by China. This development is understandable in the changing situation in Afghanistan. However, we need to have the confidence that should we see that the Russo-Pak ties are against our interests, we can always put our sensitivities across to Russia with whom we have adequate leverages to limit the ties. Russia can also play a positive role to make Pakistan see reason.

Coming down to the core issue of Indo-Russian ties. As the equation between China and Russia start strengthening further, it will cast a shadow on India. Already there are tacit moves by Russia to wean us away from USA. While that is understandable, the Russians also need to be made to understand that the Sino-Russian growing bonhomie is not the best thing to happen from India’s perspective. Hence our equation with the USA and QUAD will have to expand. Any change in status can only occur if China is reasonable. To that extent, Russia needs to put it across to China not to be as intransigent or assertive as it is.

Overall, it can easily be seen that the global geostrategic situation is in a state of flux. Apart from that there is also a fragility in the air, with warnings and threats of conflict being thrown about far too often. In this era of uncertainty, the Indo-Russia equation is a great global balancer and can contribute significantly to world peace and stability. However it involves playing a certain amount of Russian Roulette. India should be prepared for that.