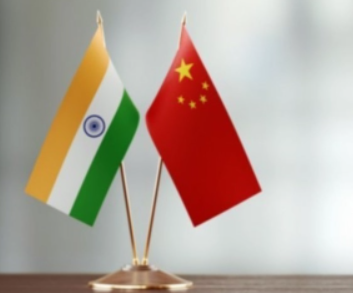 The article begins by explaining the fundamental tenets of Grey Zone warfare and goes on to study Chinese Grey Zone activities that keep the tempo below the threshold that could lead to a conventional response. Grey Zone warfare, being practiced by China for long, could remain their standard tool in the years ahead. It goes on to define what could be an Indian response to the Chinese manoeuvres.

The term Grey Zone warfare entered the military lexicon in the context of Chinese tactics in the South China Sea. The term and its practice is quite widespread now. From all inputs, it is clear that the Sino-Indian Logjam is a Grey Zone conflict which China has been waging relentlessly in pursuit of its geostrategic objectives against India. This will be the standard form of conflict that will occur along the LAC and beyond in the future till China feels that the conditions are ripe to raise the ante. Prior to analysing as to why and how China is playing the Grey Zone, we need to understand what is this all about.

Grey Zone warfare is waged to attain strategic objectives in which tactics are above the threshold of peacetime activities but below a level that triggers a conventional military response. By design or default, it is ensured that  all actions fall between war and peace. The aggressor deliberately ensures an uneasy peace. Operations are carefully designed to keep issues on the boil. Moves are incremental, calibrated and cautious; salami slice the issue rather than seeking quick decisive results. The idea is to change the status quo in small steps and replace it with the intended outcome.  Care is taken to remain below key escalatory thresholds to avoid war. All instruments of national power, military and non-military, as also kinetic and non-kinetic tools are put into play.

It is theorised by Peter Layton in his article The Evolving Risk of China’s “Gray Zone” Operations that  Grey Zone activities have two important variables – use of violence and military. He has evolved a matrix based on likely Chinese actions in the Grey Zone with or without using these variables. This matrix when transposed to our context reveals a lot. However before that, the matrix and the explanation are reproduced below. 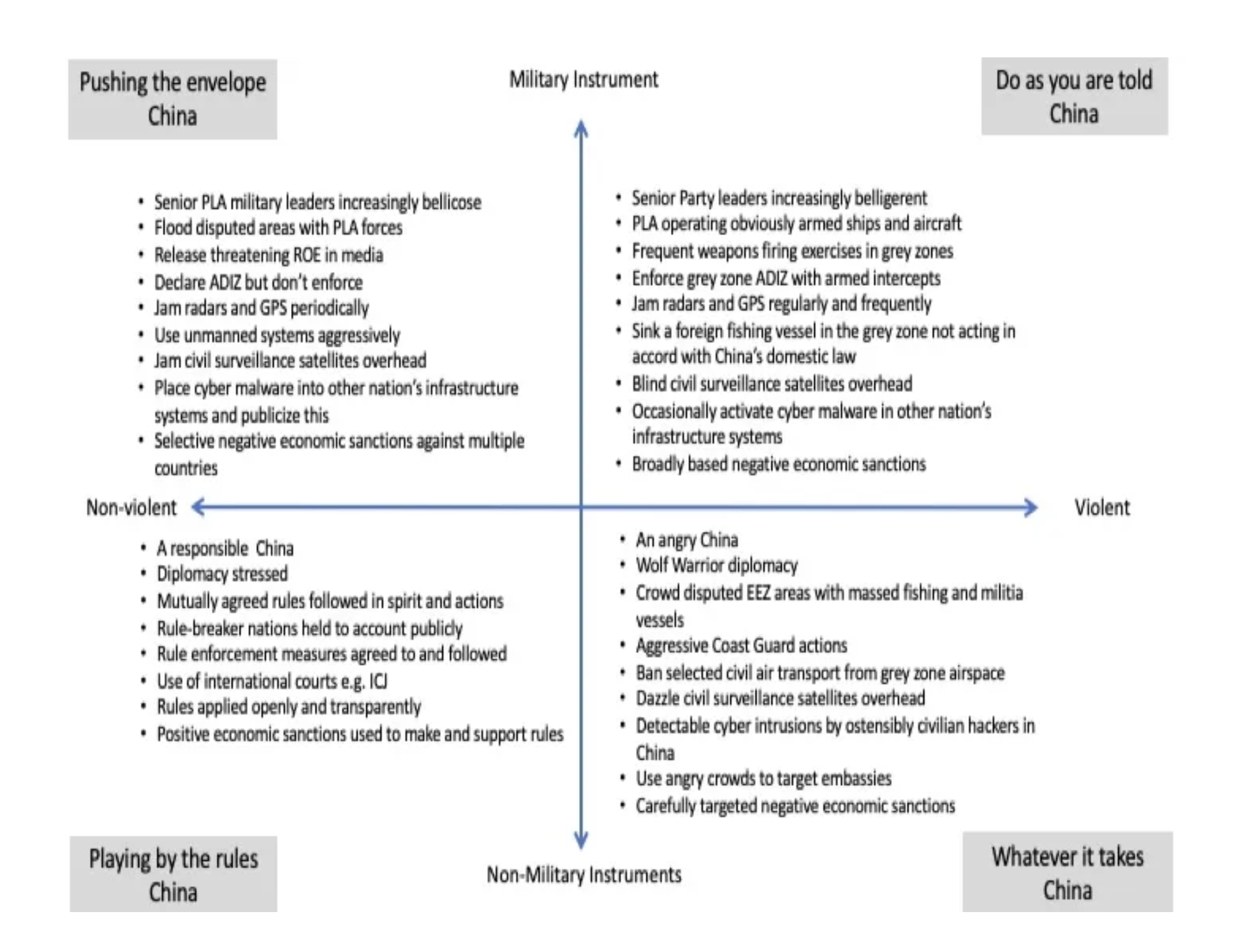 The ‘playing by the rules China’ is an optimistic future where a responsible stakeholder China abides by the rules to which it has agreed with others. The ‘whatever it takes China’ is a minor deterioration from now and is perhaps a near-term prospect. The ‘pushing the envelope China’ is an evolved future where much greater use is made of the PLA but in a non-violent way. The ‘do as you are told China’ is a near worse-case possibility that is arguably on the limits of Gray zone activities; there would be a high risk of peace breaking down and serious armed conflict starting.

Another article by James Holmes and Toshi Yohara traces China’s GreyZone strategy in South China sea. Early in 2000 China came out with a diplomatic narrative based on its ancient mariner, Zheng He to lay claim to the Spratlys and Paracel Islands. However, it reassured everyone that it could be trusted to negotiate and would really not press home its claims unilaterally. Everyone believed it. In 2009, China claimed “indisputable” or “irrefutable” sovereignty through a map of the South China Sea bearing a “nine-dash line” at the UN. After 2009 it started using militia embedded within its fishing fleets to coerce smaller neighbours whose navies were small. Chinese actions were too small for any reaction from Obama’s USA which was busy with Afghanistan. From 2010 onwards it started patrolling the Senkakus to challenge Japanese control of these Islands. In 2013, it declared an air-defense identification zone over the East China Sea, encompassing Japanese- and Korean-administered islands.  In  2016 the adverse ruling of  the Permanent Court of Arbitration against it was rejected outright by China.

It continued to violate the UNCLOS and harass the South China Sea neighbours, especially Philippines and Vietnam on the premise that it was policing seas that had belonged to it historically. Thereafter, it built artificial islands in the South China Sea and converted them to military outposts. Now it has promulgated a law where ships entering the area must reveal their position to China. The story does not end there. Having attained control over the Spartlys, it has now started repeating the story in the Paracels and has started coercing Indonesia and Malaysia with the same tactics.

China started playing in the Grey Zone soon after we entered into an MOU with it in 2003 where we recognised Tibet as part of China and it recognised Sikkim as part of India implicitly. Till then there was no claim on Arunachal Pradesh. Soon after that, the coinage  ‘South Tibet’ started appearing in articles, reports and talks. Now, it has openly claimed the state as part of its territory. It has built villages along the border in disputed territory. It has enacted a border law. Further it has named places in Arunachal in Chinese.

A territorial dispute has been converted into one of sovereignty. Combine it with major incursions/ attempted incursions in Depsang, Raki Nala, Chumar, Doklam and Nakula. Also include the major incursions, faceoffs and clashes in Galwan, Pangong Tso, Hot Springs, Gogra and Depsang in 2020.  A pattern emerges. However, China took great care not to use firearms in any clash but resorted to medieval and brutal weapons to stamp its authority and claim.

It was only after we occupied the Kailash Ranges and when it knew that India will not back down that it started negotiating. In 2020,  China also carried out cyber-attacks against India’s electrical power grid to coincide with the border clash. It has also started writing and giving diktats to our parliamentarians. Simultaneously it has built three new villages, roads, police outposts, and even military infrastructure in Bhutan, claiming it as part of Tibet. It is coercing Bhutan to part with Doklam to settle the issue.

Why is China doing what it is doing. In my article China : Middle Kingdom to Mother Earth I had outlined that the Chinese economy was going through a lean patch. Overall one can foresee a China with a constantly weakening economy, a growing military and a declining population. This is a combination which portends trouble for China’s neighbours and adversaries. Fundamentally, Chinese ambitions to emerge as the foremost global power can now be achieved through military or other  Gary Zone actions in which the USA is side-lined. It has to show to the world that USA is marginalised and unable to do anything against China. Its growing military will be used to leverage its economy.

From all perspectives Taiwan will be its primary focus. In the event of not being able to annex Taiwan, its next target is India which is its closest competitor and a global alternate to China in sheer scale and capability. Grey Zone operations enable heap humiliation on India constantly. It shows USA’s inability to protect its strategic partner. It highlights Indian weakness and ineptness. It also enables China to create conditions to batter down Indian thinking incrementally to accept its point of view eventually. It sets the stage or creates an opportunity to take some decisive action to achieve its strategic goals along the LAC. Last but not the least any humiliation of India reinforces Xi Jinping’s standing in China as its tallest leader. Overall, Chinese Grey Zone activities will be the norm along the LAC and also in the hinterland.

If this is the predictable line which China will adopt, there is not only a requirement to recognise it but start some counteractions. Simply put, India should start playing the Grey Zone. Based on Chinese activities hitherto fore, we must have trip lines to monitor Chinese actions which will let us know the direction and intent of Chinese actions.

The first option India has is to mirror Chinese actions. For example if they have named places in Arunachal Pradesh in Chinese, we can name places in Tibet in Hindi. Mansarovar can be claimed as Indian territory based on ancient history. We can start playing on the instabilities of China. Xinjiang, Tibet and Taiwan offer plenty of scope in this regard. We need an official Tibet Policy. India can open a completely new front in Grey Zone activities through our people and media. A new front can be opened up in the Indian Ocean. All we have to do is get a bit assertive in the Six and Ten degree Channels. We have not done enough on these issues. India can also use its strategic partnerships to start a coordinated action in the Grey Zone. In this respect USA and Japan offer opportunities for joint action. India needs to act and not react in the Grey Zone. Equally important is that we should show measured restraint so that things do not escalate like they did in Eastern Ladakh.

Grey Zone activities are designed to chip away at morale and confidence. A rising India cannot sit back and let China carry on with its designs unchecked to dampen national morale. If India is to be a regional or global power of consequence it must contend with China in the Grey Zone. Further, if India is to be the global alternative to China it needs to approach these activities with confidence. That confidence will come out of political will to stand up to China and look them in the eye.  Finally, we should not forget Pakistan. Pakistan and China will do everything in their power to act in concert with each other in the Grey Zone. In this regard, our military and civilian leadership must sit and chart it out so that China and Pakistan know that India will give it back in good measure.