The waters of South China Sea have been on the boil for quite some time now. Inspite of the ruling by the Hague-based Permanent Court of Arbitration that clearly went against Chinese claims to areas in South China Sea and gave its ruling in favour of Philippines, China has not accepted the judgment. In fact, the whole area has transformed into an amphitheater of power display with major powers in association with the countries in the region often exercising or traversing through areas that the Chinese unilaterally claim as theirs. The author narrates the goings-on in these disputed waters.

On 30 Sept 2018, a Chinese warship came within 45 metres of a US Navy Destroyer, in an apparent effort to ward of the intrusion of the US naval ship near Gaven Reef in the disputed Spratly Island region of South China Sea. US responded by flying B 52 Bombers which even conducted aggressive maneuvers. 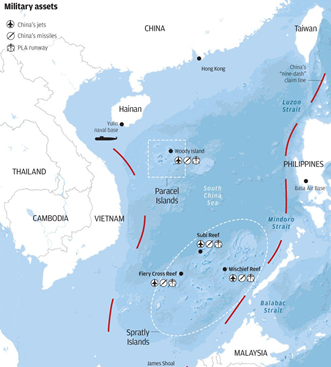 South China Sea is encompassed by China in the North and Indonesia in the South It is a 3.6 million square km area bordering Indonesia, Malaysia, Vietnam, Philippines and Brunei. A thriving fishing zone, it accounts for 10 % of the global catch. It has known reserves of oil and gas but most importantly, about $ 5 trillion worth of global trade transits through the South China Sea including  over 30% of the maritime crude oil trade.

China, which was humiliated in the Opium Wars in the 19th Century, crushing of the Boxer Rebellion and the Japanese invasion in early 20th Century, seems to have learnt from its history. In an effort to bolster its defence, in a manner similar to Americanization of Caribbeans under the US President Roosevelt’s watch, it has laid claim to South China Sea as per a 1947 map in which nine dashes portrays the Chinese part of the sea, approximately 80% of the total South China Sea, which includes areas claimed by Vietnam, Philippines, Brunei , Malaysia and Taiwan. International Court of Justice at Hague turned down the Chinese claim in 2016, but China did not agree to its ruling.

In this disputed areas lie the Spratly Island archipelago. China has reclaimed 3200 acres of land and also created artificial islands. On these islands, China has constructed ports, lighthouses and runways and stationed a variety of military equipment. China is very sensitive to any other country’s vessels near these structures, without prior permission.

USA has not yet backed any claimant in these disputed waters. To uphold the Freedom of Navigation Operations (FONOPS), American warships have conducted intermittent sailing in the disputed parts of the South China Sea to drive the point home that these areas are international waters and not the sovereign territory of any of the claimants. The FONOPs ships have sailed well within 12 nautical miles of geographic features in the waters that are claimed by China, the limit of territorial waters as stipulated by the United Nations Convention on the Law of the Sea. However, these do not include the artificial Islands created by China, as the International Court of Justice does not recognise them as sovereign territories.

In May 2018, the Indo Pacific Fleet in cooperation with the claimant states less China, plus UK, France, UK, India, Japan and Australia conducted a naval exercise in an area including portion of disputed South China Sea. China, initially invited, was later removed from the list of invitees.

China has denounced the American FONOPS operations, stating that it impinges on its sovereignty, undermining China-U.S. relations and regional peace and stability. China views US actions in South China Sea as a prelude to a military action to cut off Chinese maritime trade routes. 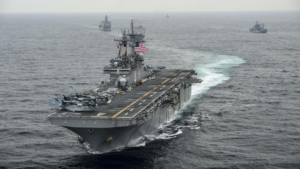 The US has now embarked on a mission to curb the growing influence of China in all spheres. Its FONOPS in South China Sea are an attempt to curb China, militarily.

Geographically, China is much closer to South China Sea than US naval resources are. Even if US Naval ships enter South China Sea, China will not be much affected. The movements of US ships will however be under constant surveillance by the Chinese assets deployed in the reclaimed islands and from mainland.

It implies that in the eventuality of a ‘no conflict’ situation in South China Sea, Chinese assets in the region will continue to  dominate nearly 1800 km south of Chinese island of Hainan  and with time these assets would be upgraded  and new islands / military bases created by China.

India too has found itself being overshadowed and intimidated by the growing Chinese influence in South Asia and in Indian Ocean region. China today is the largest supplier of arms to Pakistan and is investing over US$ 60 bn in China Pakistan Economic Corridor, which passes through Pakistan held Indian territories of Gilgit and Skardu, thereby impinging on our sovereignty.

To counter China, we have expanded our relationship with USA, Israel, Australia, Indonesia and Japan. With USA, we have on 6th September, 2018, inked the Communication Compatibility and Security Agreement (COMCASA). India, through this agreement will get access to Combined Enterprise Regional Information Exchange System (CENTRIXS) which is the secure communication network of US military. This will enhance our situational awareness of the Indian Ocean region, including of course of Chinese naval activities. 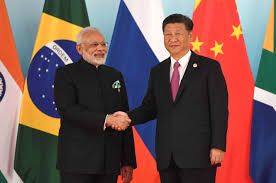 Image Courtesy: War On The Rocks

However, China and India are contiguous neighbours. India has an $ 85 bn annual trade with China. Russia, our all-weather time tested

friend, is also a inching towards being a strategic partner of China. India, hence has to maintain a very fine balance in its strategic cooperation with US, lest it loses out on trade with China or its vital strategic partnership with Russia.

The world watches the developments in this region with abated breath, especially in the backdrop of the ongoing US-China trade war. A number of high level visits have been cancelled by either side. The US has upped the ante by sending its naval fleet to Taiwan through the Taiwan Straits and by agreeing to sell more sophisticated military equipment to Taiwan. The US has also accused China of trying to influence the forthcoming November 2018 US midterm elections.  Japan too has agreed to sell advanced military equipment to Philippines. In addition, this region, by 2025, will be populated by an additional 25 submarines. All this makes South China Sea, a potential flash point.