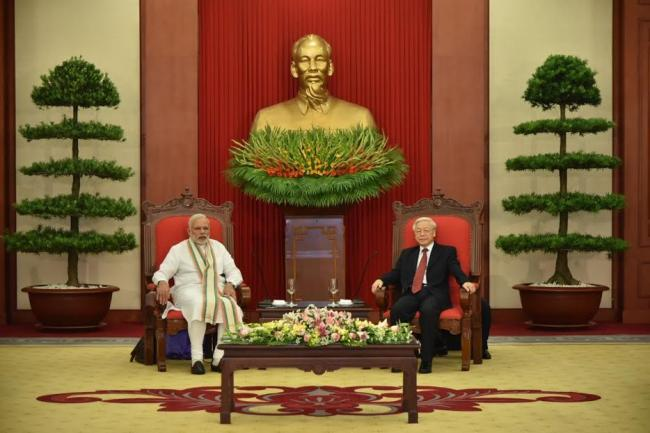 The Chinese are aggressively attempting to expand their zone of influence globally with the Asian geography being a prime focus. Their attempts are often coercive, relying heavily on economic linkages that slowly gather the strength to deny strategic freedom to smaller nations whose developing economies require major funding. If India desires to be counted, even regionally, it needs to provide the other pivot in Asia for smaller nations to come together and resist Chinese hegemony. One of the countries, along with India, that had to fight along its borders and beyond in the seas with China, is Vietnam. The author probes the relationship between India and Vietnam and illustrates the potential of the relationship. 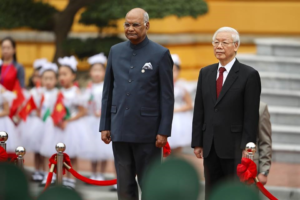 The Indian President Ram Nath Kovind paid a state visit to Vietnam from 18 to 20 November 2018 where he met key officials of the Government including the General Secretary and the President Nguyễn Phú Trọng. The two countries have cultural links for 2000 years. The strategic partnership is linked to culture, history and security. Vietnam forms a part of the erstwhile term Indo-China which signifies the relationship of the country with India and China. Vietnam has had numerous conflicts with China for the last 900 years. The last war with China was in 1979, while there was a skirmish in the Johnson South Reef area on 14 March 1988. Thereafter, the two countries have militarily occupied islands in the South China Sea. India’s strategic partnership was formed in the prevailing circumstances. The current status is enumerated below.

On 25 December 1991, President Gorbachev resigned as the President of the Soviet Union and on 26 December 1991, the Russian Government took over offices of USSR in Russia. This led to a difficult situation for India and Vietnam which had numerous Soviet arms and armaments in their inventories. India had, along with the Soviets, built a moderate defence industry which had developed reasonable capabilities in areas of licensed production, overhaul and manufacture of spare parts.

The political proximity between the two countries transformed into a need-based strategic relationship to keep Soviet equipment operational. Accordingly, both countries formalised this strategic cooperation by a Memorandum of Understanding in 1994. This enabled India to service Vietnamese aircraft and provision for spares of tanks and ships. The Indian Army Chief visited Vietnam in 1999 and a defence protocol was signed in 2000. This allowed Vietnamese personnel to be trained in Indian military institutions and also enabled Indian military personnel in teaching English to the Vietnamese Armed Forces.
In addition, visits by naval vessels of the Indian Navy to Vietnam increased. High-level visits gathered momentum and all this finally resulted in a Strategic Partnership in 2007 leading to cooperation in other areas as enumerated below:

In consonance with our Act East Policy, Prime Minister Modi visited Vietnam in September 2016 and signed the Comprehensive Strategic Partnership upgrading the relations between the two countries. The pertinent aspects as a result of this up-gradation are as under:

• A Defence Line of Credit of $ 500 million.
• Facilitate construction of Army Software Park at Telecommunications University by granting $ 5 Million.
• The Signing of contract for High-Speed Patrol Boats between L&T and Vietnam Border Guards.
• Assistance in civil uses of nuclear energy.
• Training in Jungle Warfare by Vietnamese for our soldiers.
• Construct satellite data downloading stations to download satellite imagery from Indian satellites over regions of China and the South China Sea.
• Annual strategic dialogue at the Secretary level between the two countries likely to be upgraded to ministerial level.

The relations are moving on an even keel and it merits importance to analyse issues for the future. 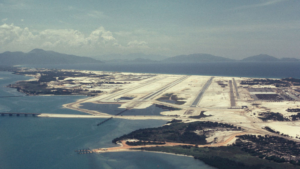 Cam Ranh Bay has been often described as one of the jewels of Vietnam. The long protective seaward peninsula, natural inner and outer harbours form what many believe to be possibly the best deep-water seaport facility in the entire world. There is also an Air Force base with excellent runways for state of art aircraft. The usage of these facilities by the Indian Navy and Indian Air Force would help us strengthen our strategic partnership and enable undertaking actions to protect our assets in the South China Sea. The issue is under consideration between the two countries.

Based on Vietnam’s requirements India could provide Dornier surveillance aircraft, mini Unmanned Aerial Vehicles (UAVs), upgraded T-72 tanks, indigenously manufactured artillery equipment and a few of our old ships. Vietnam is currently procuring Offshore Patrol Vessels with our line of credit. Vietnam is impressed with our missile development and is keen to purchase our supersonic cruise missile BrahMos which could be used on land and sea. The issue merits serious consideration as there are no objections from the foreign joint developer. Vietnam is also keen that opportunity is accorded to them to train their scientists in missile technology and running of nuclear reactors.

The Vietnamese President and the PM Modi were frank in advocating the strengthening of defence relations with India. Vietnam would like to cooperate in the fields of training, gaining knowledge and expertise in the fields of rocketry and missiles. It would be in our interests to cultivate Vietnam and cooperate in strategic aspects to dissuade China from undertaking a misadventure.

Vietnam is looking for cooperation in areas of outer space with India. They have already launched two satellites and are planning their own navigation satellites. Cooperation with India would be mutually beneficial for both countries. India is also setting up receiving stations to enable Vietnam to receive downloads from our reconnaissance satellites of South China Sea areas. Further, there is a need to provide direct air connectivity as also land connectivity through ASEAN. Cyber warfare and the field of Artificial intelligence is gaining importance. Both countries are keen to cooperate in this field.

India has assets in the region and must enhance its area of influence to include the feasibility of a base at Cam Ranh Bay for smooth operations in the South China Sea. Further, India must be magnanimous to Vietnam and cooperate in the fields of nuclear, outer space and cyberspace to strategically counter Chinese hegemony.