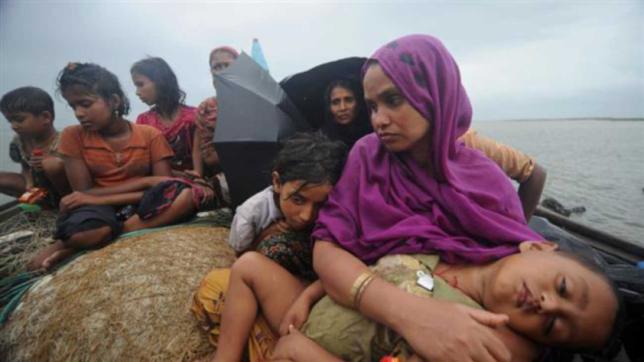 The Rohingya Crisis Needs A Solution Within Myanmar

Every time there’s a problem in Rakhine, Myanmar the cascading effects are felt in Bangladesh and India. A stream of refugees flow into the camps in Bangladesh and join the stream of malnourished Rohingyas awaiting for food packets to arrive. Apparently, there is no solution to this migration, not at least till the Myanmarese government is ready to absorb them in their country with equal rights and opportunities to them. The article traces the historical roots of the issue and offers a few answers.

THE ROHINGYA CRISIS NEEDS A SOLUTION WITHIN MYANMAR

“It is not power that corrupts but fear.”

It is always horrifying to witness human suffering, injury, death and indignity. That is exactly what the refugees from the Rakhine State of Myanmar are undergoing presently in their fight against apparently planned persecution. There is a need to study and analyse their history and circumstances before allowing only compassion and empathy to dictate our policy in this regard.

Rakhine State or Arakans, with its capital city of Sittwe, is Myanmar South West. It is separated from central Myanmar by the Arakans Mountains. Its eastern portion borders with 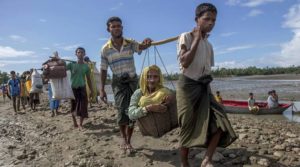 Shah Porir Dwip: Rohingya Muslims, who crossed over from Myanmar into Bangladesh, carry an elderly woman in a basket and walk towards a refugee camp in Shah Porir Dwip, Bangladesh, Thursday, Sept. 14, 2017. Nearly three weeks into a mass exodus of Rohingya fleeing violence in Myanmar, thousands were still flooding across the border Thursday in search of help and safety in teeming refugee settlements in Bangladesh. AP/PTI(AP9_14_2017_000228B)

four other states of Myanmar and the western consists of approximately 500 km of coastline along the Bay of Bengal. It has approximately 250 km of borders with Chittagong division of Bangladesh. Geographically, the area is better connected to Bangladesh than to the rest of the country.

Myanmar has about 150 ethnic races and a major portion of the country is inhabited by these groups. This is the reason for its diversity and also fissiparous tendencies. Rohingya is an ethnic group of Muslims and inhabit mainly the Rakhine State

It would be pertinent to mention that approximately 15 percent of Myanmar’s population are Muslims of whom nearly half reside in Rakhine. There are many other ethnic minorities in Rakhine including Hindus. The demographic mix is a permanent powder keg.

Historically, the Muslims (Rohingyas) are of Arab traders’ descent in Arakans (Rakhine), and are more aligned to the co-practitioners of their religion in Bengladesh rather than the Burmese. There have been trans-migrations and commerce between Arakans and Bengal. The transition of the state of Burma through the Anglo- Burmese wars, conquest by Japan, liberation struggle, Independence from Britain, civil strife and then military rule to Myanmar, has left the region traumatised and factitious. It is only now that the country is consolidating as a democracy of sorts.

Rohingya Muslims perhaps gave the region one of the foremost mujahidin groupings. Before and in 1947-48, they wanted to have their state absorbed into East Pakistan (now Bangladesh). They were a minority asking a neighbouring country to absorb a region. The fact that their language – Bengali – was different, just as their religion Islam was also so, did not allow their integration with the war- hardy people of Myanmar. Blood was spilled on both sides, initiating a series of migrations and repatriations. What we are witnessing is the latest episode of that sequel.

Thein Sen, the retired Myanmar Army General who was the President of the country from 2011 to 2016, famously stated, “There are no Rohingya among the races (in Myanmar). We only have Bengalis who were brought for farming (during British rule).” These words have guided the approach off most leaders of Myanmar, since 1948.

A visit to the country recently gave the impression that their Army was robust and in full control of the countryside as also the process of transition to democracy. The Army had actually demobilised certain personnel of its cadre and formed a grouping which was trained in politics; and whose members actually joined the political class as civilians. Their new capital city, Naw Pi Taw, was sparkling and gleaming, and houses politicians, bureaucracy and embassies. Chinese stranglehold on Myanmar is evident and Chinese transport into Myanmar, does not stop at the northern borders. There customs formalities are undertaken at their destinations; some at them at the port of Yangon (Rangoon). Myanmar has transited into a modern democratic state but is still in a precarious position in terms of assimilation of its ethnic groups.

In Myanmar, the defence forces as well as the civilian industries are thirsting for a fillip. They lack in almost all industrial and modern things. Actually, the country should make any entrepreneur or multinational excited about the opportunities there. They need almost everything. But, they want it in the South Asian way of growth. Aung San Suu Kyi said, “The best way to help Burma is to empower the people of Burma, to help us have enough self-confidence to obtain what we want for ourselves.” India owes it to Myanmar and South Asia to fill in the gaps, both in goods as well as governance.

India, and especially the Indian Army, has lots of goodwill and influence in Myanmar. As a leading country in South Asia, there is considerable onus on our shoulders to resolve tensions and ensure peace and stability in the neighbourhood. An old Burmese proverb states that “Only your friends will tell you when your face is dirty.” India must be that friend. India needs to expand its foot print in Myanmar, especially army to army cooperation. High level visits, sharing democratic practices and strengthening Myanmar’s democratic institutions, nation building, infrastructure creation, education; the list is long and covers most facets of democratic functioning. 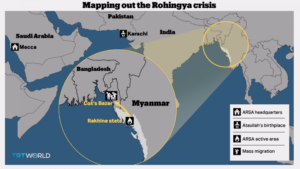 To start with Rohingyas should not have to seek refuge. If they have to then the natural country of choice should be Bangladesh and not India. If refugees are coming into India, it is with the complicity of either the Myanmarese or the Bangladeshi authorities. However, what they actually need is integration in their own homeland – Myanmar. Till such time as Myanmar can be made to create conditions for these ethnic minorities to be accepted by Myanmar, the capacity of Bangladesh has to be boosted to host the refugees. Ideally the conditions created should allow Rohingya refugees in India to also go back to their homeland without apprehensions.

Bangladesh needs to ensure that it does not become involved in the internal matters of Myanmar; otherwise the situation will take a totally different turn. If need be, a UN Peace Keeping Force staffed by South Asian countries could be deployed to temporarily manage the crises and defuse the situation. In its own interests, Indians need to assist and coax the Myanmar government in finding a compassionate solution.

Let not the people of Myanmar, to include the Rohingiyas of tomorrow say with regret, in the words of Martin Luther King, “In the end we will remember not the words of our enemies but the silence of our friends.”