The Tale Of Two Corridors Beyond Gwadar & Chabahar

The China Pakistan Economic Corridor (CPEC) terminates at Gwadar Port. Its value for China is indeed strategic. However, what it would do to Pakistan’s economy and sovereignty is debatable. Next to Gwader, less than a 100 km away, is the Chabahar Port. It’s value is not limited to India or Iran, but promises a lot for Afghanistan and the CAR countries. The General in his article assesses both the ports and provides a realistic assessment of the two projects that are progressing simultaneously.

THE TALE OF TWO CORRIDORS

The Lands Beyond Chabahar and Gwadar: ‘Beyond Chabahar lies a land brimming with oil and gas. Beyond Gwadar lies a land full of Fidayeen and Mujahideen’. This comment, which I picked up from the net, set me off to compare the high-profile Gwadar and CPEC with the low profile unnamed corridor beyond Chabahar. My understanding and comparison reinforced Aesop’s fable. It is about the contrasting stories of a hare on a spring board and a tortoise in silent slow motion. No guesses as to who is winning. Aesop’s fables were all about wisdom and common sense. However, for lesser mortals like us we need some issues to be put in perspective.

Gwadar and Chabahar are two ports, which are works in progress. Both are alike to the extent that they are deep water ports, just 72 km apart sitting strategically at the mouth of the Gulf of Oman but outside the Middle East imbroglios. Both are at the mouth of emerging corridors which are destined to have a profound impact on the livelihood, economies and strategies of the nations and people they connect – whether they succeed or not. However there after they are as different as chalk and cheese. That makes their cases interesting to understand in their perspectives in the evolving scenario.

The Tale of CPEC

Gwadar – The Arrowhead. The deep-sea port of Gwadar is the arrowhead of the spear called CPEC which is being fired from the bowstring of China’s ambitious Belt and Road Initiative. It is to have nine berths of 3.2 km each – really a massive port. It has also been handed over to China for the next 40 years. Infrastructure to back the port – roads, rail lines, energy transmission lines, water, oil refineries et al are presently lacking. Actually, at present, it is a Chinese port to nowhere. 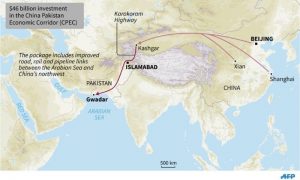 CPEC Motives. Overall billions are being sunk into this hyper mega deal called the CPEC. Pakistan hopes that CPEC will change its fortunes and catapult it into a developed nation. For China, the mega picture is world dominance and total hegemony over Pakistan. Underneath that dream, CPEC is an entry to the warm waters of the Gulf to provide China with energy security by an alternate route to solve its Malacca Straits dilemma. Beyond that, CPEC is about export of goods to the Gulf States and Africa. Coal from Tarim Basin of Xinjang is likely to be the main export for decades to come – pollution and environment be damned. China has been pulling all stops to lend funds and build the Corridor. Pakistan has been busy welcoming the Chinese with open arms and eyes wide shut to ensure that the Corridor goes through. Even to the extent of being on the verge of losing its sovereignty through a debt trap. There is feverish activity in Pakistan to build this corridor and operationalize it at the earliest by both nations. This high-profile case is running into head winds as predicted by many.

Lack of Inclusivity. Everything seemed hunky dory till recently. The first blip was probably when the common man in Pakistan started to realise that this project is not as inclusive as it was picturised. It lacks transparency. Even the State Bank of Pakistan has been busy distancing itself from it. Chinese have been given preferential treatment at the expense of Pakistanis. They fear that their economies and businesses will be destroyed by a flood of cheap Chinese goods. Jobs and profits for Chinese seem more than for the Pakistanis. It is seen to be exclusive – to the Chinese and a limited section of influential Pakistanis. If the relationship between Pakistan and China was unequal it will be one sided after the project.

Political Headwinds. After Nawaz Sharif’s forced exit, there is political uncertainty in Pakistan. Reports coming out indicate that CPEC will slowdown. Pakistanis can cry hoarse that all is well, but the Chinese themselves have started expressing doubts. An uncertain and slippery political landscape will hamper this project when grassroot political and governmental support starts wavering. Files must be cleared and laws passed after all! China can never fathom how these things work in the subcontinent. Can they dream of street action by judges and lawyers to end a military rule? Incomprehensible to China and totally normal for Pakistan. Political headwinds can derail the project. In any case it will get delayed. Delay leads to cost escalation. Who will bear the additional costs? It has already increased from 46 to 62 billion USD and will only increase further with time. Time is something which China might not have. Its slowing economy, debt bubble, increasing lack of cost competitiveness of Chinese goods and other such factors are going to impinge on this project; adversely as time goes by.

Security. Then of course, there is an issue of security. The CPEC road and rail networks as also some of the projects are coming up in traditionally problematic areas of Pakistan – Baluchistan, described as the troubled heart of CPEC, the law less Khyber Pakhtunkhwa and disputed Gilgit Baltistan. In all these areas, there are sub regional and extra regional insurgencies which are growing. The mix is heady and is only fermenting in political uncertainty. Militarization of CPEC to provide security will be retrograde in the long run.

Compounding Factors. Other issues which compound problems of CPEC are related to environmental degradation in Pakistan, dilution of Pakistan’s stand on Kashmir, Chinese hegemonistic designs and India’s open opposition to the project to state a few. Add to this the growing number of influential Pakistanis who are expressing doubts over this project. The picture which started as green is slowly but surely turning red. That is the tale of CPEC.

The Tale of the Corridor through Chabahar

Chabahar – Gateway to Golden Opportunities. The Chabahar port – described as the gateway to golden opportunities has been awaiting development since the days of the Shah. India and Iran wanted to develop the port since 2003. However, US sanctions against Iran prevented any forward movement. Now that sanctions are past tense; India and Iran have entered into an MOU to operationalise the Chabahar port.

A special purpose vehicle (SPV) will invest USD 85.21 million to convert two berths into a container terminal and a multi-purpose cargo terminal. The Indian built container facility will give a fourfold increase in the handling capacity of the port by 2018. There after Indian entities will run it for a period of ten years before handing it over to Iran. Work has commenced and is progressing well. The whole deal has been viewed to be equitable to the interests of both nations.

The Un-named Corridor. The corridor with no name behind Chabahar port is based on existing roads making it a low investment high pay off corridor. Afghanistan is already accessed from Chabahar port using the combination of Iranian road network to Zahedan and the Zaranj-Delaram Road constructed by India in 2009 at a cost of 1.34 million USD. This is a direct road link to four of the major cities of Afghanistan – Herat, Kandahar, Kabul, and Mazar-e-Sharif. It by passes and frees Afghanistan from dependence on Pakistan.

The Iranian road network further to Mashhad connects the CARs through Turkmenistan and frees them from being landlocked. It supplements the International North South Transit Corridor(INSTC) which connects India to Eurasia. India is also building a rail line from Chabahar to Zahedan which increases the corridor capacity.

Inclusivity. This corridor pales in comparison to CPEC if costs and capacities are considered. However, that will be offset by the human capital involvement, inclusivity and multinational benefit it will generate. Countries which will primarily benefit are India, Iran, Afghanistan and the Central Asian Republics (CARS). All of them are also getting into bilateral / multilateral arrangements with each other and other surrounding countries to meet their respective aspirations and requirements. Countries like Oman, Qatar, Turkey, Russia, Ukraine, Syria and other east European countries are on the inclusivity sphere. Projects include roads, railway lines, water pipelines and energy transmission lines. Funding for this corridor, in a macro sense, is shared and contributed by participatory countries though it is India led in an unobtrusive manner. Most importantly it is low profile and likely to succeed in time.

Political Tailwinds. India, Iran and Afghanistan are the core countries in this project having entered into a tripartite agreement to operate a transit and trade corridor. India and Iran are however the key drivers of this project. Both are stable and rising powers with a people who have clear understanding and respect for each other’s culture and history. Outside this, every country involved in this effort has something to gain. Overall there are a lot of political tailwinds propelling the project. It seems to be a case of one plus one synergizing to eleven.

What are the opportunities? To outline a few, India gets energy security, access to the markets of CARS, re-energizes ties with Iran and breaks the Sino Pak nexus. Iran sees an opportunity to become a great regional player once again and gets a major port which is strategic in nature. For Afghanistan, it is an opportunity to get out of the clutches of Pakistan. The CARS will have a major trade avenue outside Afghanistan, Pakistan and China. The international community gets an alternate route to stabilise Afghanistan and not depend on Pakistan. Everyone gets something and more. As days go by the tailwinds on this project can only increase. There will be some security issues, but they will be minor compared to what CPEC faces. 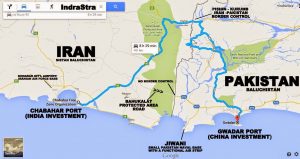 The Sum of Two Tales

The tales of these two corridors are fundamentally the same. They are about greater connectivity between people. That’s where the similarity ends. How they are achieving this connectivity, at what cost is it being achieved and for whose benefit is what is to be seen. But then that is being moralistic and judgmental in a world of real politik. The more pragmatic way to assess them would be to see if they can deliver the goods that they are promising to the people whom they are connecting.

They might deliver the goods; however, will the people be better off before this connectivity came through? Or will they be better off without it? Again, the motives behind the projects need analysis. Hidden and ulterior motives will have unintended and dire consequences. Some of which cannot be even fathomed now. So, one should wait. How long? I guess by the end of 2018 it will be clear if they are already not now.

But the pointer to the future lies in how I started this story – ‘Beyond Chabahar lies a land brimming with oil and gas. Beyond Gwadar lies a land full of Fidayeen and Mujahideen.’