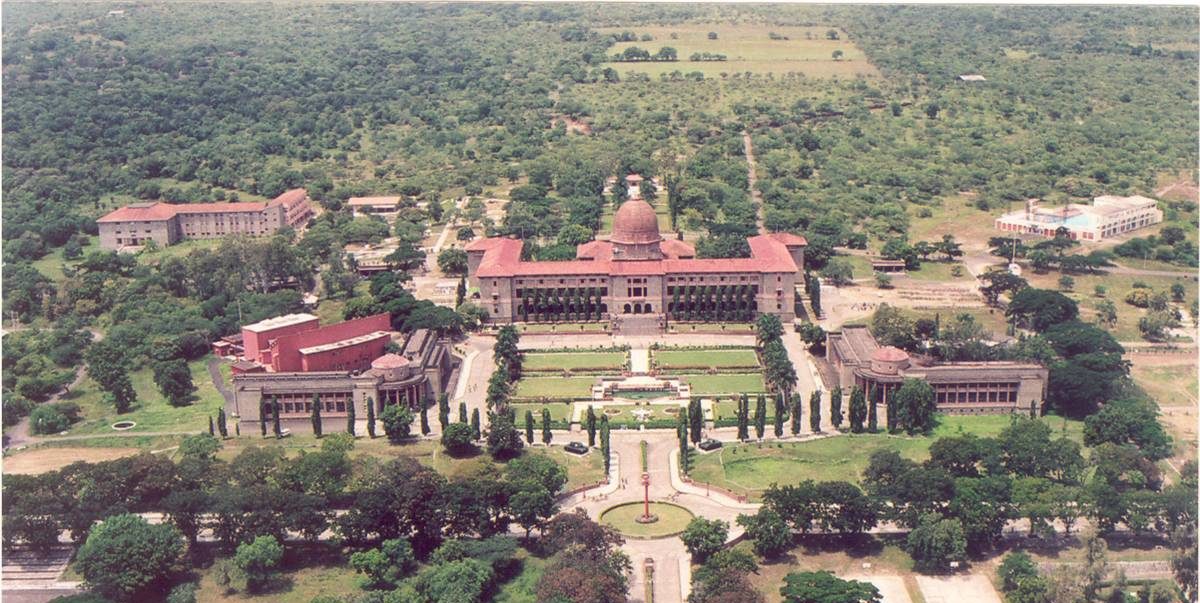 Transforming Military Academies to an Annual Intake and Academic Cycle

The author suggests that there is a strong case for transiting from a six- monthly intake system to an annual system. The advantages could primarily be qualitative, because more time and energy can be given to the core academic curriculum and the military subjects, as well. Besides, it could save money, human resources and time devoted to the myriad activities of the induction process nation-wide as well as reducing the time spent on passing- out- parades and other activities in the academies itself. The example of the Navy’s experiment of 25 years for its engineers is referred to by the author. The author feels that cumulative savings in revenue budgets by more careful consideration of processes could be significant.

Transforming Military Academies to an Annual Intake and Academic Cycle

In recent weeks, the National Defence Academy (NDA) has, rather unfortunately, been in the news for wrong reasons related to the induction and promotions of civilian faculty members who are supposed to be so critical to the academic degree programme. Commenting in the media, some have also underscored the need for upgrading academic rigour in the NDA. In taking this further, there are many things that need to be addressed. Presented here is only one: Change the intake pattern at our Academies (at least at NDA, Indian Naval Academy—INA—and Air Force Academy—AFA) from a six- monthly cycle to an annual one. This could also be applied to some other specialized initial- feeder technical colleges in the Army. Similarly, the primary programme at IMA (where NDA and direct entry cadets are combined) could become annual.

It is likely that a six- monthly intake programme for officers at the IMA before independence and at the precursor to the NDA, the Joint Services Wing (JSW), was dictated by the surge in officer intake needed for the darkening clouds of an impending big war and later for the rapid expansion of Indian forces after 1947. Whatever might have been the drivers for a bi-annual cycle of intake and output, an annual cycle should now be considered. 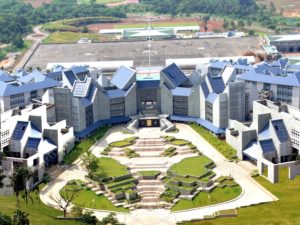 As far as this writer knows, most similar institutions the world that are affiliated to university-linked academic degree programmes run on annual cycles. While our academies have had affiliation wedded to the six-monthly framework, there would be substantial benefits in annualising this.

We all know that six- monthly induction training and a Passing-Out-Parade (POP) at the end of every term imposes quite a bit of load on the academies and cadets. The quest for “perfection” in a POP requires—or at least required when I was a cadet in the NDA in the late 1970s– about two weeks (perhaps 11- 12 working days) of two practices a day.

With other ‘end-of term” activities like PT, variety entertainment and riding displays, there is almost no other activity of military training (called Service subjects in NDA) or degree related studies. While there is a case for achieving good standards in drill, perhaps so many practices are not required. Moreover, doing it just once a year instead of twice clearly frees up more time for cadets that could be used for training and education, both of greater lasting value than a “perfect” POP.

We need not go into several other smaller, perhaps avoidable activities that impact on cadets as well as the staff and faculty’s time and concentration related to end- of- term activities. But, doing even this once, rather than twice has its benefits. Surely a POP and other side-shows need weeks of planning, expenditure and several hundreds of man- hours from the staff in the academies that might not even be possible to quantify. A related risk, something that one could call “quasi-cultural” is the tendency to make parades and such activities more complicated and elaborate over time such that even more practice and ever more resources are needed. I term it quasi- cultural because the urge to “improve” over the previous “show” is getting embedded into our system. There is a tendency for increasing symbolism to trump substance itself.

While all universities have semesters or trimesters in which the year is divided, there is a holistic annual approach to degree work, examinations, academic audits etc. For this, academic rigour needs centrality. Major factors coming in the way may include the lesser attention that is devoted to the core academic curriculum by the military elements involved in the process from headquarters in Delhi and, occasionally, in the Academy itself. This may also result in a laissez faire attitude from the governing university in not expecting and not demanding the rigour and even vigour that would ultimately help the services into which these cadets are commissioned. 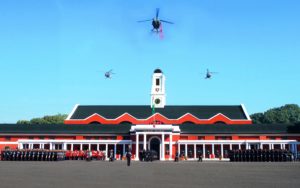 Secondly, the six-monthly cycle perhaps create inevitable pressures on staff and faculty to “wrap-up” curricula and exams, hold the convocation, and get by with reduced internal scrutiny and academic strictness that is required. Even if an academy does not reduce the time that it devotes to a POP (and it should, I think) at least two weeks are saved for more initial level military- professional training and academic qualifications. Importantly, the academy’s leadership and management can stick to the core purposes of their academies.

Time is precious and two weeks ought to matter. Likewise, resources spent on induction processes need to be galvanized only once a year. Yes, the load increases and the pitfall of reduced qualitative content must be avoided. The induction process starts with a UPSC exam followed by interviews with the Services Selection Boards, medicals and finally arrival at the academies. At all stages, some consolidation, amalgamation of resources, dividing the load between different types of entries to different academies and specialised colleges as well as other types of entries (into legal, education, armament, medical, etc.) may be looked at. On the other hand, the number of SSBs has burgeoned. While the Services are not as cost- conscious as we need to be, the impact of inefficiencies on the revenue budgets is not “cost- neutral!”

Here is an analogy: The IITs go through this exercise just once a year and have seen little benefit in adapting to six-monthly cycles. In theory, they could, of course. Yes, their interviewing systems are less elaborate than SSBs, but the exams and interviews are rigorous in their own ways. The numbers are large as well. In 2016 about 1.1 million students took the JEE for about 10,000 plus seats in the 23 IITs. In some ways, therefore, with the numbers taking the NDA exam and finally making it to the portals of the hallowed Academy in Khadakwasla, there is perhaps no tougher proportional selection in India. But, like for the IITs, doing all this once a year could save us resources, human and financial.

Anecdotally, and perhaps even statistically, it may be possible that the cadets who join in the “Autumn terms (i.e. in July every year) have been keener because most are fresh out of high-school. In the “Spring- Term” (beginning in January of the year) it is sometimes said that this factor is on a reduced scale. Whatever be the case, getting them in fastest after school (as do the IITs) may be better.

Some problems, none of them serious, could arise. If a change is to be executed, there could be a gap “spring term” with no entrants and the shortfalls could be made up by approximately double the numbers in the “autumn term.” Instead of course numbers, cadets could be thenceforth known as the class of 2022/ 2023/ 2024 etc in line with the passing out year. The current hierarchy among cadets laid out in six or eight terms (like in the INA) would change to a four year scale and a new equilibrium would form. There are issues that are similarly minor, even if one would not wish to call them trivial. For major misdemeanours or sub-standard performance or some other reasons requiring relegation, a cadet could lose one year instead of six months. Some alternative scale could be found, and for some, the incentive not to lose a year may itself be good motivation.

One consequential benefit would be that IMA could reconfigure itself accordingly and increase its efficiencies while reducing some costs. Further, equivalence across the services would be determined by commissioning year and the gap of one year within batches might make the selection processes for promotions or courses etc., more equitable. Even as there could be some challenges,  flying training phases and resources at the AFA could possibly be organised more efficiently on a one- year scale instead of the task of splitting it into two six-month phases with the next batch leaning on the door bell  of each phase, come what may. 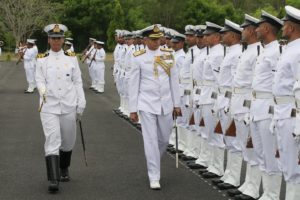 In what is perhaps the only exception, the Indian Navy (IN) had successfully implemented this format with the Naval Engineering Course (NEC) at INS Shivaji, the navy’s marine engineering establishment in Lonavala. In 1984 the navy started a 10+ 2 basic engineering course for the Marine as well as Electrical engineering branches in the existing Naval College of Engineering. Cadets were selected directly from schools based on their graduation marks, overall performance and personality tests in a SSB. By all parameters, these cadets did outstandingly well as a group and later on as individual officers, leaders and specialists. Interestingly, theirs was an annual intake model.

Apart from military- naval training, including drill and PT, their academic curriculum was tough and taken very seriously. The results were very satisfactory.  Of interest is that not only were the cadets selected by the Navy, the faculty itself was primarily on secondment from DRDO and not via the laborious UPSC processes. This was perhaps possible because of the close relationships formed between the Navy and DRDO in the quest for indigenization over decades. (In fact, a small number of the DRDO faculty went back to defence laboratories and did stellar work in the strategic missile and other programmes.) Once the four- year BTECH programme for all cadet- entry officers commenced at the INA, the NEC was discontinued after 25 annual batches. 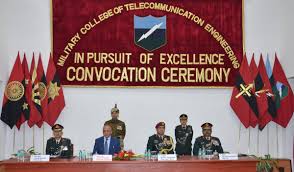 Nonetheless, apart from all the pluses above, the primary benefit that needs reiteration is that a tough academic curriculum steered by a motivated faculty, would create lasting professional benefits for all services. There are misconceptions that persist in pockets—and often at senior levels, one may add – that academic orientation, technical proficiency and intellectual excellence do not somehow fit into a warrior ethos. However, several serious books on military competence, military leaders and their successes and failures demonstrate, in different ways that soldierly and scholarly attributes have never been in a binary relationship; that technical knowledge ultimately helps tactical proficiency; and that as a rule one must read more to lead better, well stated in relatively recent American approach: “Read to Lead.”

Training and education in foundational military academies and colleges are both necessary and each service has to determine the balance needed. In doing so, it would be useful to consider that officership and even flag and general- officership is ideally built and improved upon every single day of an officer’s career and life. Only the foundation of officership begins to be laid in the academies. However, it is equally important to consider that, in essence, only the three or four years that a cadet is present in the academy are available for his under-graduate academic foundation and consolidation.

In some ways, perhaps our predecessors had figured this out when they thought of NDA as a “cradle of leadership” realising perhaps that officering must, indeed, keep improving right until one’s grave.