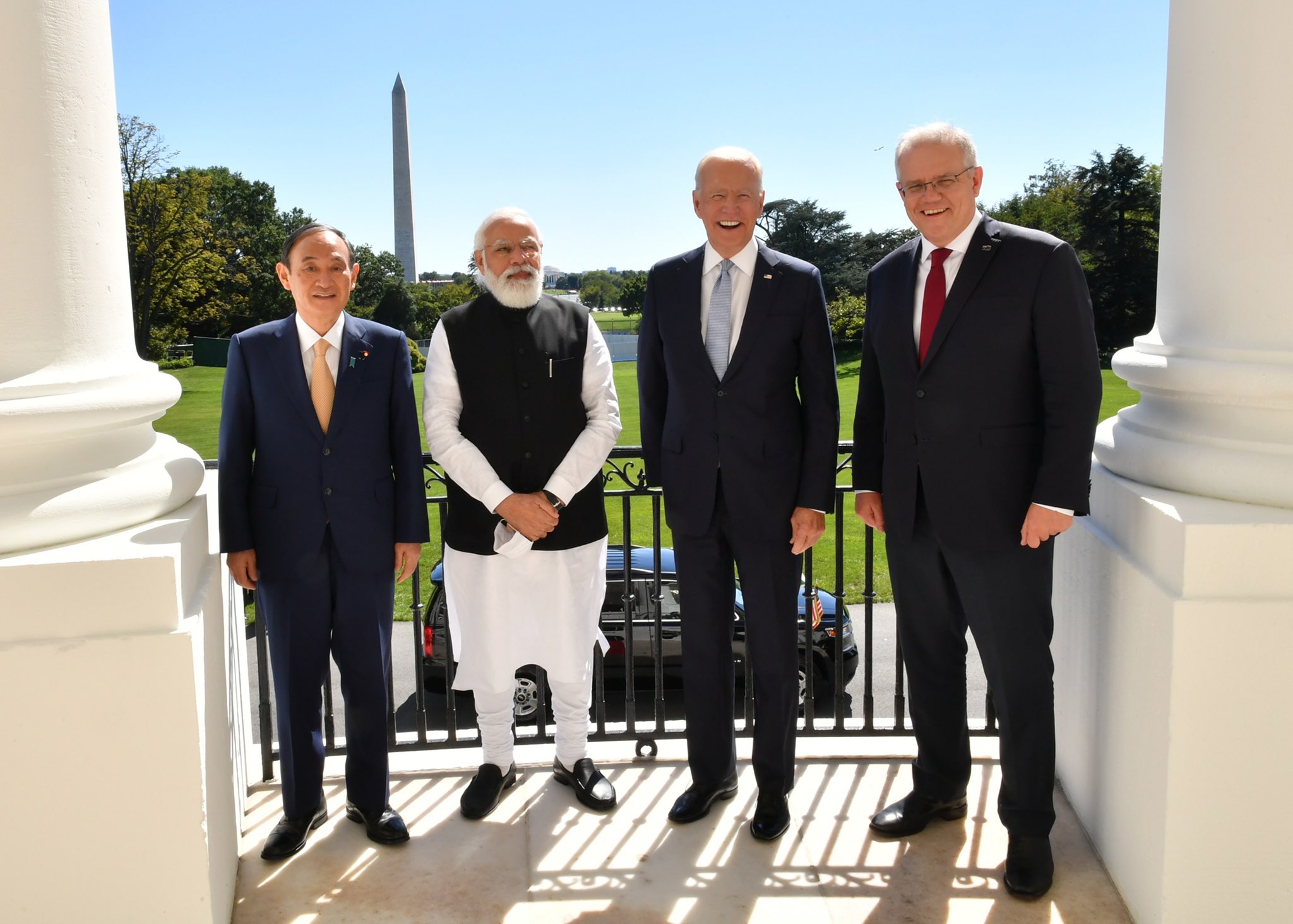 Two Sides of the Same Coin: The Divergent Convergence of QUAD and AUKUS

AUKUS has raised quite a storm of divergent debates. Is AUKUS going to make a dent in QUAD’s importance? Or, would it enhance QUAD’s potential? There’s quite a maze to be navigating through. The article expands on the strategic, diplomatic and economic aspects of the AUKUS –QUAD equation to arrive at the relationship between the two.

The announcement of the new trilateral security partnership between Australia, the United Kingdom, and the United States (AUKUS) has created ripples across and beyond the Indo-Pacific. The AUKUS has triggered many epitaphs for the QUAD. Trigger happy analysts, diplomats, thinkers and some journalists have pronounced that – AUKUS spells the death of QUAD, QUAD has become irrelevant, AUKUS  has diminished the QUAD and will dilute it. The overall reaction is emotive with a lack of geostrategic understanding. There is no doubt that QUAD and AUKUS are divergent in structure and character. However, they are fully convergent in the overall Indo Pacific construct to contain an assertive China, hell-bent on expansion with utter disregard to the international rules-based order. QUAD and AUKUS are the two sides of the same coin.

The first point of convergence is that both have a vision of a Free and Open Indo Pacific. The second issue that needs to understand is that the Chinese aggressive behaviour has triggered many countries in the region and those from outside the region to form bilateral and trilateral partnerships in the Indo Pacific in recent years. The common aim of all these relationships has been to firewall against Chinese assertion to protect their mutual and individual interests.

To highlight the issue, India has strategic relationships with the USA, Australia, France, Japan and Vietnam. In addition, it has trilateral like Australia-India-Japan, India-Japan-U.S., Australia-India-Indonesia, Australia-France-India, and India-Italy-Japan – in the region. All these are relevant and reinforce each other and are not at each other’s expense. The same applies to the QUAD and AUKUS. Further, there is also ASEAN in the region which will get strengthened by QUAD and AUKUS in different ways to ensure it does not get swamped by the Chinese influence.

Getting to the crux of the issue, containment of China involves economic, diplomatic and military aspects. At a macro level, all these issues need to be tackled and contested if China is to be kept under check and its influence curbed. It is very clear that USA has embarked on a strategy where AUKUS is used to plug the military hole developing in Western Pacific to contain China. The QUAD is being used to tackle China on the diplomatic and economic front combined with a lot of soft power. However, both are not exclusive to each other since there is a military component in QUAD and an economic and diplomatic component in the AUKUS. They really complement each other and are fully convergent despite their apparent divergence.

AUKUS is a security partnership of three rich countries which are old-time allies. It is a tight grouping of stable democracies with similar systems, policies, national outlooks and values. At this point in time, the partnership is about building SSNs for Australia to enhance its capability. In future, it will expand in scope in all likelihood. USA, Australia and UK, have a lot in common including a bitter adversary in China. It is no secret that Sino- US equation has deteriorated sharply in the past few years to the extent that many conflict scenarios between the two are often being painted. The UK has been slighted by China rudely by reneging on the treaty which guaranteed Hong Kong a special status till 2047 and usurping it into the One China system prematurely. Australia is in a full-blown adversarial relationship with China and is being often threatened with dire consequences. Each cannot tackle China independently but together they can. Hence it is natural and axiomatic that they have got together. At present, AUKUS has a narrow focus on enhancing Australian military capability with SSNs. What does that mean? It primarily redresses a regional strategic imbalance. The containment of China implies that it has to be kept near its shores and not allowed to expand. However, China is strongest near its shores and in the South China Sea. On the other hand, the USA the main balancer is half a world away from the region. Its residual power in the region will not be able to contain China or stop it from expanding. There is no regional player to counter China. QUAD members have their concerns in other areas and cannot focus on the South China Sea and Taiwan alone. Hence jump-starting Australia as the regional anchor with a continued and permanent presence makes imminent sense. In any case, Australia had already announced a significant increase in its defence budgets for the next decade to arm itself against China. If this is synergised as part of a larger effort, it creates a force imbalance and a new security dilemma for China. It imposes caution on China to force a rethink of any Taiwan misadventure. It forces China to be more defensive than trying to be continually offensive and abrasive. It seizes the initiative away from China.

Most importantly, it caters for a future scenario. If and when the Taiwanese pivot of the first island chain is lost,  there will be a need to ensure that China does not have a free run to expand into the Western Pacific. The rise of an Australian force in the coming decade with considerable air, sea and underwater capabilities will prevent exactly that.

AUKUS is really a futuristic idea whose time has come. It is also not as if AUKUS does not have economic and diplomatic payoffs. Building and maintaining an Australian force consisting of SSNs in addition to the missile and space capability which it is already seeking means a lot of international economic activity for the next few decades. The diplomatic impact in the region is also huge. AUKUS focuses on the heart of the matter with China – Taiwan, the first Island chain and the South China Sea.

QUAD is a wider kettle of fish that addresses the larger Indo Pacific Issues. To put it in perspective, QUAD composes of a superpower and three middle-level powers; all four vibrant democracies comprising three civilizations. USA and India have strong and experienced Armed Forces. QUAD has three of the top five economies in the world. It is a healthy mixture of raw material, manufacturing, and consumer power with tremendous innovation capability. It has the economic potential of enforcing decoupling from China and creating alternative markets. QUAD has the heft to tackle China economically and diplomatically on wide-ranging issues. It can address larger issues like climate change, tackling the pandemic, and heralding new technologies. It is a larger platform that can also accommodate regional and extra-regional players like EU, ASEAN, S Korea and New Zealand. It has wider acceptability. It has global leadership potential.

Very importantly, two QUAD members – India and Japan, have territorial disputes with China and were reluctant to get drawn into the South China Sea and Taiwan disputes. Specifically, India was uncomfortable with the commitment expected out of it in the South China Sea when a reciprocal commitment in the IOR and its border issues was not forthcoming. One has to remember that India is locked in a territorial dispute with Pakistan and China which keeps periodically conflagrating in a dangerous nuclear triangle. India also has to balance out its traditional relationship with Russia and Iran. With Afghanistan going the way it has, India and the USA need a free hand to forge new relationships to handle terror and bring stability in South and West Asia.

The new-look QUAD frees India and the USA to force a stretch on China to the West, keep tabs on Afghanistan and the terrorist situation and dissuade Pakistan from turning into a nuclear rogue. On the other hand, if QUAD can just support India logistically and with intelligence, it can handle China and Pakistan on its own. It can completely block China from entering the IOR.

QUAD derives greater benefit from the new structure since it takes care of India’s concerns and leverages India’s strengths better.  In the same vein, Japan’s constitutional concerns are also taken care of. Japan was unable to commit to QUADs military requirements as per its constitution of being a self-defence force. Now Japan can concentrate on strengthening its defence in the East China Sea, and the Senkaku’s area to tackle China.

At the core, one has to remember that QUAD is the short form of Quadrilateral Security Dialogue. The QUAD navies are still carrying out joint maritime exercises. All the QUAD nations have significant 2+2 strategic relationships. There is an underlying strong military platform that is current and operative. It is a palpable strength in the present and not a future concept like AUKUS. As much as there is an economic dimension to AUKUS, there remains a military dimension to QUAD.

Does one see the convergence in the divergence between QUAD and AUKUS? In fact, the real convergence emerges here. AUKUS leaves QUAD to have a balanced focus on the larger part of the Indo-Pacific and wider issues which cannot be ignored. QUAD will be happy that the excessive military focus on the South China Sea is taken off its back. China has to decide which is the NATO of the East! A very important issue has come up in this entire sequence of events. USA has once again demonstrated its ability to forge alliances and partnerships, in double-quick time, shift military focus to the Western Pacific and handle larger issues of terror, stability, HADR situations, trade, energy, climate change, pandemic, and technology cooperation between those who matter. On the other hand, China is left struggling to find an ally beyond Pakistan and North Korea has only fair-weather relationships with Russia and Iran and lastly is being forced to stretch in the West and being bottled up in the East. The convergence in the divergence is palpable.