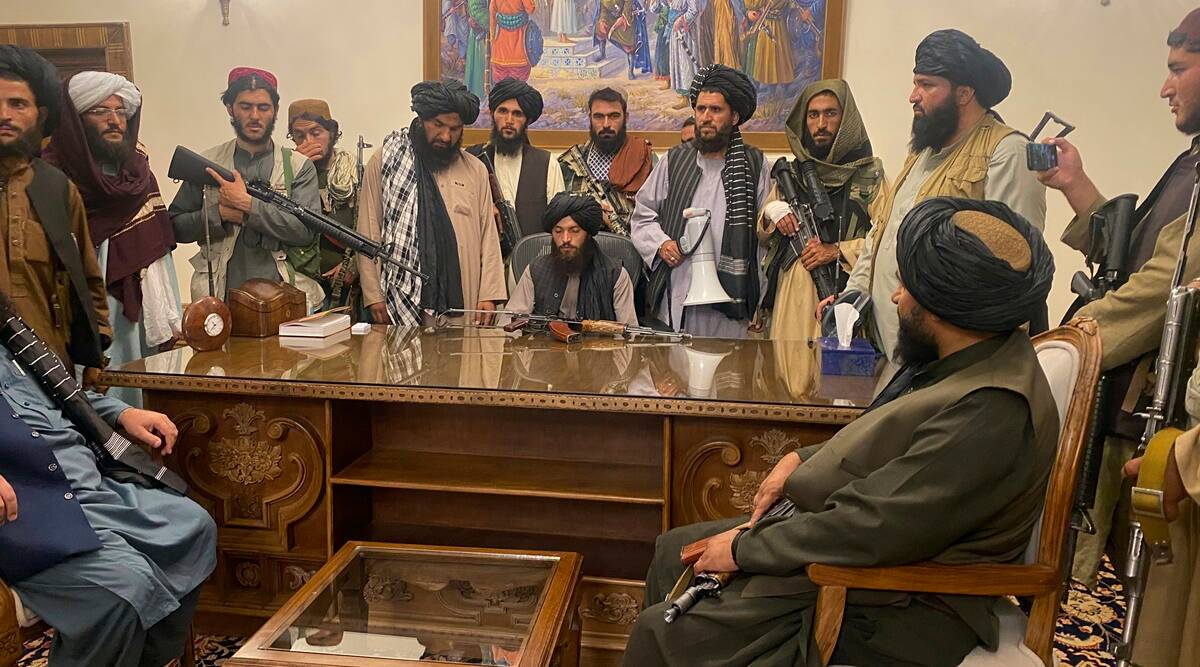 It’s getting more and more difficult to predict the course that Kabul will steer the Afghan nation through, in the days ahead. Taliban’s actions belie Taliban’s stated intentions. The very composition of the Afghan ministry signals the increasingly firm hold of hardliners on the country. The article takes stock of the emerging situation and attempts to define a possible Indian stance.

After two decades, Taliban has not only recaptured Afghanistan but also global attention. The US, mulling over the futility of years – at least through three Presidencies – to get out of the ‘forever wars’, finally exited on 31 August from the losing war on terror. In extricating, the full circle from “Taliban to Taliban’ was completed, leaving the poor, dreamy-eyed Afghans, especially women, to their fate, yet again.

Whatever progress in terms of democracy or development had been made was dumped for strategic convenience. The ignominious exit by the hyper power, the fall of the Afghan armed forces and an inept government against the rag tag but battle-hardened Taliban has become a sad allegory of debate for the strategic community. The US and several others have coined a new spin: the good and bad Taliban into Taliban 1.0 and Taliban 2.0 obfuscating the bitter reality that has been unfolding since August 15; the day Taliban dramatically captured Kabul when India was celebrating her 75th Independence Day.

Meanwhile, the Doha based leadership under Mullah Baradar had become media savvy with the help of the Rawalpindi GHQ. It was churning out social media narratives at an unusual pace conveying the notion that this time Taliban has a more catholic outlook even if it was going to adhere to its own version of Sharia in the Islamic Emirate. That’s precisely what it did much to the consternation of the international community that kept harping on the red lines while quickly trying to extract their citizens and some Afghans. The Kabul airport was the scene of desperation and even bomb blasts, busting of the myth that Taliban was somehow a monolith.

Reports of Taliban’s regressive policies and enforcements are aplenty. Also obvious are the ugly fights for creamy governance posts by various constituents like the Haqqani Group- a sanctioned entity by the US. It controls Kabul and key cabinet positions including the Ministry of Interior by Sirajuddin Haqqani with powers to appoint the Governors. Although some minority Uzbeks, Tajiks and Hazaras have been assigned positions, women have seen their Ministry being converted into Ministry of Vice and Virtue with a bearded leader giving the diktat.

It appears that the slick pronouncements by the amenable Taliban spokesmen are not in sync with the underlying reality and intent and the Doha faction is in minority. As such, the most visible leader so long, Mullah Baradar was given a comparative junior position of Deputy Premier; trumped by Akhund.

Likewise, high profile India trained negotiator Stanikzai is only a Deputy Foreign Minister. More than half of the Ministers are internationally proscribed for extremist activities. However, the Taliban has smartly attached another minister or Deputy Minister in the important ministries who might not be sanctioned and can travel. US has already asked for extending the waiver on their travel to the UN.

Whether Taliban 2.0 has transformed or not, the international community and geopolitics in the region have surely undergone a change. With the US exit, the field is open for competition for Russia, China, Iran, Qatar and Turkey. Taliban’s erstwhile supporters in Saudi Arabia and UAE have taken a back seat but remain in the fray.

Pakistan, the progenitor of Taliban, especially the Haqqani Group, remains a constant. It has successfully encashed its nuisance value, considered strategic by all major powers, be it US, China or for that matter Russia. In the bargain, they have made a strategic mistake by not recognising or ignoring the terror designs of the Rawalpindi gang. If there is no terror or threat in Afghanistan, Islamabad’s relevance would decline. Even today they remain the major interlocutors and spokesmen for the Taliban at international fora. PM Imran Khan, worried about Talibanization of Pakistan itself, has been pitching for early recognition of the Taliban government and immediate assistance lest it leads to more radicalism and terrorism.

As such, a divergent mix of terrorist groups populate Afghanistan, to include Pakistan based Lashkar e Taiba (LeT), Jaish e Mohammed (JeM) and Al Qaeda (AQ) said to be present in at least 15 provinces. Above all is the ISIS-Khorasan whose global Islamic State dream is at odds with the Talibani Islamic Emirate of Afghanistan.

The internecine competition among various rabid terrorist and tenacious and fundamentalist groups may undermine the capacity of Taliban to govern and fulfil the tall promises of not allowing its territory to be used for fostering terrorism against any country. Ofcourse, without taking Pakistani designs into their articulations a turf war leading to a civil war among the terror groups is also a real possibility with dangerous regional ramifications. If the international community co-opts Taliban to counter terrorism across its borders it may have to compromise on inclusivity and women’s rights.

The key paradox for the international community remains the distinction between enforcement of human rights and urgent provision of humanitarian assistance. Both are equally necessary and not mutually exclusive per se but prioritising certain dimensions ab initio is essential to prevent a pandemic ridden economic and financial disaster.

It was easy for the US, IMF and World Bank to plug access to the Afghan funds or international assistance but how long is it tenable given the deteriorating situation and UN appeals. UNSG Antonio Guterres and his several agencies on the ground have been spelling out the doomsday. Fortunately, the international commitments nearly doubled to $1.3 bn as against the initial request of $660mn by the UN. Unimpeded access and transparent distribution of aid were advocated. Even US has allowed access to Afghan funds and relief supplies. Here again, geopolitics takes the cake as China, Russia, Turkey, Iran and the Gulf states have taken the lead in reaching out to Taliban in providing relief and assistance.

Even though terrorism out of Afghanistan remains a common concern, Russia, China, Turkey, Pakistan and Qatar have been asking for unfreezing of funds and their access to Taliban to enable them to cope up with the immediate governance issues. Global expectations from Taliban and Taliban meeting these, have become as difficult to negotiate as the chicken and egg situation.

The Chinese appear to have cut a deal with the Taliban for investments and financial assistance in exchange for containing the fall out of Afghan Uyghurs and East Turkistan Islamic Movement (ETIM). China also plans expansion of its geo -economic BRI and CPEC projects across Afghanistan and into Central Asia and Eurasia under the tutelage of Taliban while also exploiting trillions of dollars’ worth of rare earth and minerals.

Russia is also looking at this economic opportunity, even if slightly worried about the Chinese expanding influence in Central Asia which is its backyard and under the CSTO orbit. Iran was unhappy with Pakistani ingress in Panjshir against the almost failed resistance of Saleh and Masoud. Turkey is also aiming at some benefits as a new geo political dynamic comprising of CRIPTAQ (China, Russia, Iran, Pakistan, Turkey, Afghanistan and Qatar) emerges. Saudi Foreign Minister followed by UAE Trade Minister were in India to work out some mechanisms to salvage common interests in the changing and unpredictable scenario.

India had greatly invested in nation building activities in Afghanistan for the past 20 years through its high impact developmental and capacity building projects across 34 provinces. However, the unexpected turn of events has created new challenges. It has been at a loose end, while trying to find consensus in bilateral, trilateral, extended troikas, quartets from BRICS to SCO to QUAD and the UN to steer the international community to reach a common position with regard to recognition and legitimacy to Taliban.

India has been seized with the issue during its UNSC Presidency focussing not only on three comprehensive statements but also the UNSC Resolution 2593 outlining the contours for cooperation with Taliban. The objective is to ensure that the gains of the past two decades are not frittered away. Taliban does appreciate what India has done but its intrinsic equation with Islamabad diminishes its capability to positively react and ensure no terror from Afghanistan finds its way to India.

New Delhi is concerned with the huge cache of most sophisticated arms left by the fleeing Americans which might fall in the hands of Pakistan supported terror groups whose target is just India. Hence, as the new axis and equations emerge, pragmatism would be the way forward and India will have to be prepared for all eventualities while working to help the Afghan people in their hour of need through humanitarian assistance, which has always been the backbone of its public diplomacy.