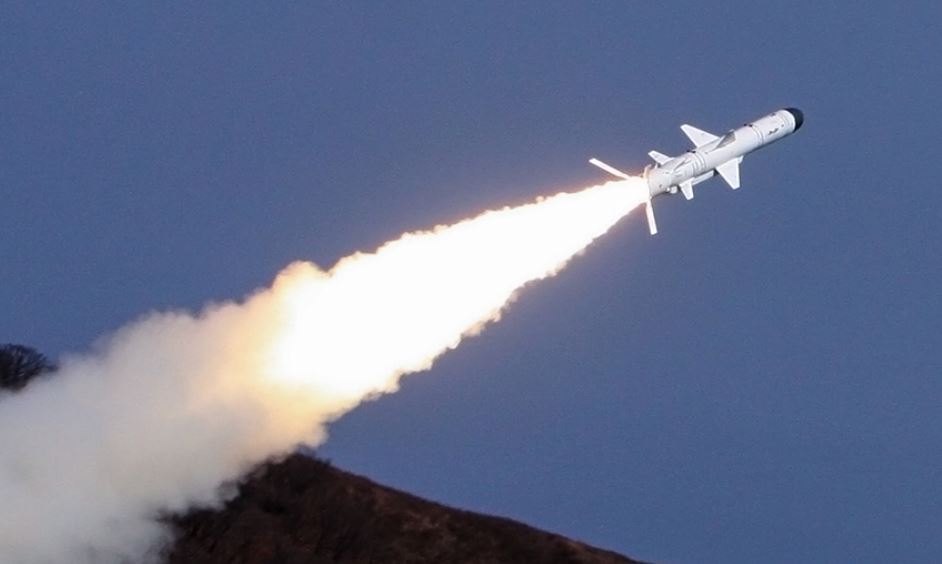 Hypersonic weapons have opened a new chapter of super-power competition. With huge budget outlays by a host of major powers, to include India, the race to produce these weapons as also invent a defence against such weapons is already being contested.  The moot question remains, are we witnessing the growth of a different type and scale of deterrence/ destructive potential?

Hypersonic Weapons are capable of travelling at more than 10-15 times the speed of sound, hypersonic missiles arrive at their targets in a blinding, destructive flash, before any sonic booms or another meaningful warning. So far, there are no guaranteed defences against them. Fast, effective, precise and unstoppable; these are rare but highly desired characteristics on the modern battlefield. And the missiles are being developed not only by the United States but also by China, Russia, France, Japan, EU, India and other countries.

Hypersonic weapon systems can be armed with both nuclear and conventional warheads and can hit critical/sensitive/strategic targets with impunity like nuclear stockpiling and delivery sites, ships and strategic objectives in all dimensions of ground, air, sea and undersea. They will be as big a game-changer in strategic, security and armament environment in as much as nuclear weapons; and India with its aspirations as a regional player and a global balancing power needs to stay in the loop of this most potent, versatile, hi-tech, disruptive technology.

Contrarian Views on its Strategic Employment

Vice Chairman of the Joint Chiefs of Staff and former Commander of US Strategic Command General John Hyten has stated, that these weapons could enable “responsive, long-range, strike options against distant, defended, and/or time-critical threats (such as road-mobile missiles) when other forces are unavailable, denied access, or not preferred.” Critics, on the other hand, contend that hypersonic weapons lack defined mission requirements, contribute little to a nation’s military capability, and are unnecessary for deterrence.

There are two primary categories:

Unlike ballistic missiles, HWs do not follow a ballistic trajectory, are highly manoeuvrable, can fly at lower altitude, making their flight path unpredictable and difficult to track, thereby reducing the effectiveness of ballistic missile defence (BMD) systems. They can approach their targets at roughly 12 to 50 miles above the earth’s surface which is below the altitude at which ballistic missile interceptors such as the US Aegis ship-based system and the Thaad ground-based systems are designed to operate, yet above the altitude that simpler air defence missiles, like the Patriot system, can reach. Officials will have trouble even knowing where a strike would land. Although the missiles’ launch would probably be picked up by infrared-sensing satellites in its first few moments of flight, they would be roughly 10 to 20 times harder to detect than incoming ballistic missiles as they near their targets.

They would zoom along in the defensive void, manoeuvring unpredictably, and then, in just a few final seconds of blindingly fast, miles-per-second flight, dive and strike a target such as an aircraft carrier from an altitude of 100,000 feet. During their flight, the perimeter of their potential landing zone could be about as big as 3000 sq km. Early warning systems might sound a general alarm, but they’d be clueless about exactly where the missiles were headed. No nation currently has any defences against such systems. This delayed detection, compresses the timeline for decision makers assessing their response options, and for a defensive system to intercept the attacking weapon; potentially permitting no response/only a single intercept attempt 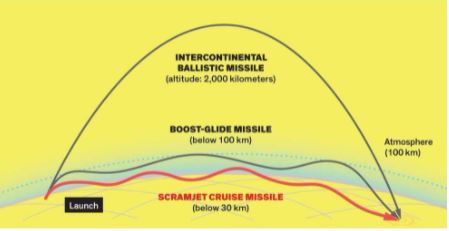 USA: The US has pursued development of HWs as a part of its Conventional Prompt Global Strike (CPGS) program since the early 2000s. Endorsing Trumps budget of $3.2 billion for 2021, the Biden administration has bid $3.8 billion for hypersonic-related research funding in fiscal year 2022. Additionally, MDA (Missile Defense Agency) has requested $8.9 billion intending to develop capabilities such as “a next-generation interceptor for homeland missile defence, hypersonic defensive capability, and a hypersonic and ballistic tracking space sensor (HBTSS)”. The US has 70 ongoing projects that are estimated to cost over $15 billion through 2024. Most US HWs, in contrast to those in Russia and China, are not being designed for use with a nuclear warhead. This implies necessity of technically challenging, more accurate HWs.

Russia and China: Russia and China provide similar rationale for developing hypersonic systems: “a concern that US HWs could conduct a pre-emptive, decapitating strike on their nuclear arsenal and supporting infrastructure, thus impacting their second strike capabilities”. China has made systematic progress in its pursuit of hypersonics. Scientific and strategic community globally, especially in the USA, feel that China is ahead of its peers in this niche-technology.

At the October 2019 military parade in Beijing marking the 70th anniversary of its founding, China paraded for the first time the DF-17 missile: range of 1,800-2,500 kilometres, equipped with a hypersonic glide vehicle (HGV). Alexander Fedorov, a professor at Moscow Institute of Physics and Technology accepts that an arms race is already on in this area but adds that Russia “has experience without much money, China has money without much experience, and the United States has both, although it revived its efforts later than did Russia or China and is now playing catch-up.”

Russia is not far behind, and has made it its priority for R&D and deployment. Russian research on hypersonic technology dates back to the 1980s, the program began to pick up momentum after the US withdrew from the Anti-Ballistic Missile (ABM) Treaty in 2001. The Russian military currently has two HMs: the Avangard and the Kinzhal. Both are nuclear capable, reportedly can fly at 20 times the speed of sound; and according to reports, is being prepared for deployment with the Northern fleet.

India and Hypersonic Weapons: India is developing a hypersonic cruise missile Brahmos II in cooperation with Russia and launched the first test flight in June 2019, which failed. India, however, tested an indigenously designed and built HGV on 7 September 2021. It is powered by a supersonic combustion ram jet/scramjet engine which activates after being launched by a solid-fuel ballistic missile rocket motor. The test vehicle flew at an altitude of 30 kilometres at six times the speed of sound for about 20 seconds after separating from the launcher, according to reports from the Defense Research and Development Organization (DRDO), which developed the system.

The DRDO confirmed that the test launch “proved several critical technologies including aerodynamic configuration for hypersonic manoeuvres.” Another three tests in the next five years “to make the platform into a full-fledged hypersonic weapon that is capable of carrying both conventional and nuclear warheads” are scheduled.

There are currently no international agreements on how or when HWs can be used, nor are there any plans to start those discussions. Instead, the rush to possess HWs has started a new dangerous arms race; one that could, some experts worry, upend existing norms of deterrence and renew Cold War-era tensions. The HGVS dangerously compress the time during which military officials and their political leaders in any country have to figure out the nature of an attack and make reasoned decisions about the wisdom and scope of defensive steps or retaliation. And the threat that hypersonics pose to retaliatory weapons creates what scholars call “use it or lose it” pressures on countries to strike first during a crisis.

Experts say that the missiles could upend the concept of Mutual Assured Destruction, the bedrock military doctrine of the nuclear age that argued globe-altering wars would be deterred if the potential combatants always felt certain of their opponents’ devastating response.

Unlike the previous leaps in military technology, like chemical and biological weapons and ballistic missiles with multiple nuclear warheads, which were controlled through superpower treaty negotiations: the ‘big three’ haven’t seriously considered any sort of accord limiting the development or deployment of HW. The UN Office of Disarmament Affairs has officially implored nations to sit down to negotiate a protocol. For years the big powers have cared mostly about numerical measures of power: who has more warheads, bombers and missiles, and negotiations have focused heavily on those metrics. Only occasionally has their conversation widened to include the issue of strategic stability, a topic that encompasses whether specific weaponry poses risks of inadvertent war.

Hypersonic Weapons are strategic and geopolitical game changers and are here to stay. A new arms race involving hypersonics is clearly already underway. No one is interested in hypersonic weapons limitation talks. In any case due to the present regime of distrust, every nation which has potential, would like to own HW/HGVs. The portents are even more lethal and deadly than what transpired with nuclear weapons. As a regional power, India needs to be part of this geopolitically and militarily essential club, as also use its soft power to cajole the international community, especially the ‘big three’, to initiate protocols for its development, deployment and use.