The visit to Washington, DC by Prime Minister Narendra Modi in June 2016 was meant to bring pending deals to closure where possible, and also to build bridges that will last into the next U.S. administration.  In no area of cooperation has progress been more evident than in defense and security ties.  Despite the fact that this visit came close on the heels of U.S. Defense Secretary Ashton Carter’s visit to India in April, the two governments managed to line up a new set of deliverables and articulate a new set of shared security objectives. 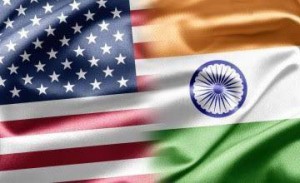 Showing progress in the closing months of the Obama administration is critical for the U.S. India security relationship.  America’s partnership with India is still not sufficiently deep as to automatically warrant attention from the next U.S. administration.  America enjoys much deeper partnerships (measured by operations, bases, formal intelligence sharing structures, etc.) with numerous European nations, Japan, Korea, Australia, Kuwait, the United Arab Emirates, among others.  In addition, India is not actively involved in managing global security threats such as China’s naval militancy in the South China Sea, the rise of the Islamic State, North Korea’s nuclear arms developments, or Russia’s military adventurism.  Working with India is still a choice, not a mandate. But that decision is easier when the next U.S. leader can point to both shared vision, and recent progress on bringing the vision to life.  That is certainly the case today.

From India’s perspective, however, the U.S. is looming much larger.   The United States is India’s largest exercise partner, and has become the Indian military’s largest supplier of critical defense materiel. And the U.S. and India have conducted some joint operations, notably in a humanitarian relief context.  Looking at India’s emerging security threats such as cyber-attacks and increased naval presence in the Indian Ocean by rivals, the U.S. partnership as a bulwark against these threats is very important, not to mention the importance of strong U.S. support to bring India in to the global non-proliferation regimes.

During the visit, the two leaders noted the progress made on existing initiatives, as well as a few new areas of cooperation.  Four agreements appeared to be the most significant in deepening defense cooperation: 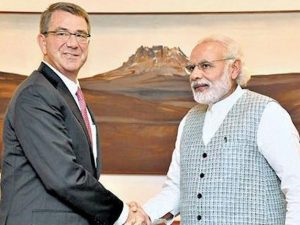 Apart from these four announcements, there were other key areas of cooperation such as the indication of American support for India’s inclusion in the global non-proliferation regimes, notably the Nuclear Suppliers Group (NSG) and the Missile Technology Control Regime (MTCR).  While these goals have previously been articulated, the real action takes place behind the scenes as the U.S. presses other members to accept India’s application.  Having these other tangible signs of progress on U.S. India defense ties ensures maximum U.S. effort in this regard.

Some analysts portray the June Modi-Obama summit as the last key U.S. India bilateral of the Obama Administration, and that our governments will now coast on our momentum into the election in November.  But that is not necessarily the case.  The resurgence of ties with India has been powered by a small group of senior U.S. officials.  As long as key officials remain in place, notably Defense Secretary Dr. Ashton Carter, the chance of additional tangible progress in our defense relationship remains possible. 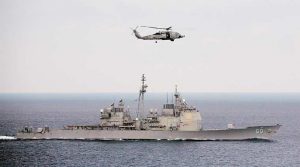 Looking ahead in 2016, there are a few critical dates on the horizon that will highlight cooperation, or present opportunities to make our security partnership more tangible.

Of course, these are only the key dates we know about today; others will likely present themselves in the coming months. And it does not count the ongoing work streams such as the Aircraft Carrier Working Group, Jet Engine Technology Working Group, and various other sub-cabinet projects that could lead to tangible progress during the year.

Looking further out, leaders from both countries must begin to consider options to ensure the next U.S. administration engages India quickly to ensure continued progress in our security relationship.  The most obvious opportunity for senior-level engagement is the Strategic & Commercial Dialogue, noted above, which should happen in mid-2017.  It is helpful that the U.S. Congress has come alive to the opportunity that exists to deepen security ties with India.  Legislation is pending that can help point to reduced controls over critical defense technologies available to India.  This increased Congressional attention can provide an important bulwark against a slowdown that will likely happen after the U.S. presidential election.

There is still time on the clock to mark further progress before the end of the Obama administration.  “Coasting to a close” is dangerous, as U.S. India defense ties are still fairly nascent compared to other American security partners.  But the trajectory is clear, as is the need for both nations to deepen our defense partnership.

Richard Rossow is a senior fellow and holds the Wadhwani Chair in U.S.-India Policy Studies at CSIS.