In December 2015, at the Combined Commanders Conference on board the aircraft carrier INS Vikramaditya, Prime Minister Narendra Modi spoke both frankly and forthrightly. The address provides the necessary insight into what have been his government’s thrusts so far and also objectives in the years ahead for regional security and military modernisation. 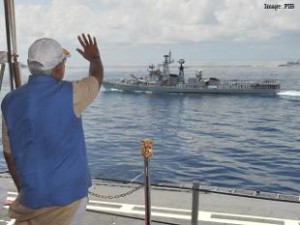 On completing two years in saddle, how far have the Indians progressed to the goalposts is the moot question?

It is important to recall the PM’s view of the spectrum of security challenges we face before dwelling on various issues he flagged in his talk. ‘We see terrorism and ceasefire violations; reckless nuclear build up and threats; border transgressions; and, continuing military modernisation and expansion,’ he said.

‘The shadow of West Asian instability is becoming longer,’ he added. ‘Beyond that, our region is marked by uncertain political transitions, weak institutions and internal conflicts. And, major powers have also increased their engagement in our land and maritime neighbourhood.’

Having defined the threat he addressed modernisation of forces, ‘We will soon reform our procurement policies and process. And our offsets policy will become a strategic tool for improving our capabilities in defence technologies.’

The Defence Procurement Procedure-2016 was released during the DefExpo 2016 by Defence Minister Manohar Parrikar. Though a truncated version, it did address offsets and raised the offsets applicability from the existing stipulation of contracts over Rs 300 crore (Rs 3 billion) to only those deals that are over Rs 2,000 crore (Rs 20 billion).

What will be more important is how well we manage offsets. So far we have been unable to utilise offsets worth $11 billion to $12 billion (about Rs 7.37 lakh crore/Rs 737 billion to Rs 8.04 lakh crore/Rs 804 billion) that are either already due or in the pipeline.

The new DPP does reduce the time we have been taking for military procurements to materialise, however, it still remains a long drawn process.

Certain aspects, most importantly the policy for choosing strategic partners for complex, high value areas of defence production, is yet to be decided upon. The DPP will be more holistic in its scope only if these issues are quickly decided upon and incorporated in the DPP.

The DPP-2016 also reflects the PM’s emphasis on Make in India. A new category — Indian Designed, Developed and Manufactured — has been introduced and will be the first preference. The DPP provides Indian industry a level playing field in competing with global arms manufacturers.

Regarding rightsizing of forces, the PM had said, ‘… major powers are reducing their forces and rely more on technology, we are still constantly seeking to expand…’

Parrikar has issued instructions to the services to identify flab. The issue is all the more important with the army’s raising a new mountain strike corps; an additional 35,000 personnel for even the truncated version being pursued as of now.

A 11-member committee led by retired Lieutenant General D B Shekatkar has been constituted to go into various issues, including changes that will improve the tooth to tail ratio.

Of late, the issue of appointing a Chief of Defence Staff has gathered momentum with Parrikar being quite emphatic about it.

Jointness also promises substantial reduction in manpower and would surely be looked into by General Shekatkar’s committee. But, it will require political will and bureaucratic foresight to actualise the process by a top-down approach.

Amongst other points, one that does make a definite statement about the Delhi dispensation’s visualisation of Indian reach was, ‘As our security horizons and responsibilities extend beyond our shores and borders, we must prepare our forces for range and mobility.’

The Indian Navy is participating in exercises in the South China Sea and the north-western Pacific. They will also be undertaking port calls in a host of countries. Reports suggest strengthening of bases in the Andaman and Nicobar Islands and P8I multi mission maritime patrol aircraft being deployed there.

The strategic airlift capability has increased with the induction of Globemaster Transport aircraft. India’s missile reach has been steadily enhancing too. There is a lot more in terms of reach to include seven stealth frigates and six submarines under construction; in fact close to 70 naval platforms are at various levels of completion.

Rafales for the air force and a concerted effort at force modernisation with the emphasis on indigenisation will definitely enhance the reach of Indian forces.

However, the PM’s vision of a lean, agile, mobile and technology driven force requires more than 1.7 percent of GDP that it now gets. It also requires a thriving private defence sector, concerted research and development and the best human resources from premier colleges to fill the ranks of the military leadership.

There is a huge gap between us and the Chinese already and if we limit our budgets to as severe levels as we have been practicing, we may not be able to field the quality of forces that can be a stabilising influence in the India Ocean region.

Finally, the quality of personnel inducted is of paramount importance. The ingress of technology in warfare requires the best brains to optimise their employment in combat.

The government and the armed forces will have to find ways and means of drawing the best talent. Undeniably, such an enhancement in quality of manpower induction pivots on the pay and allowances offered.