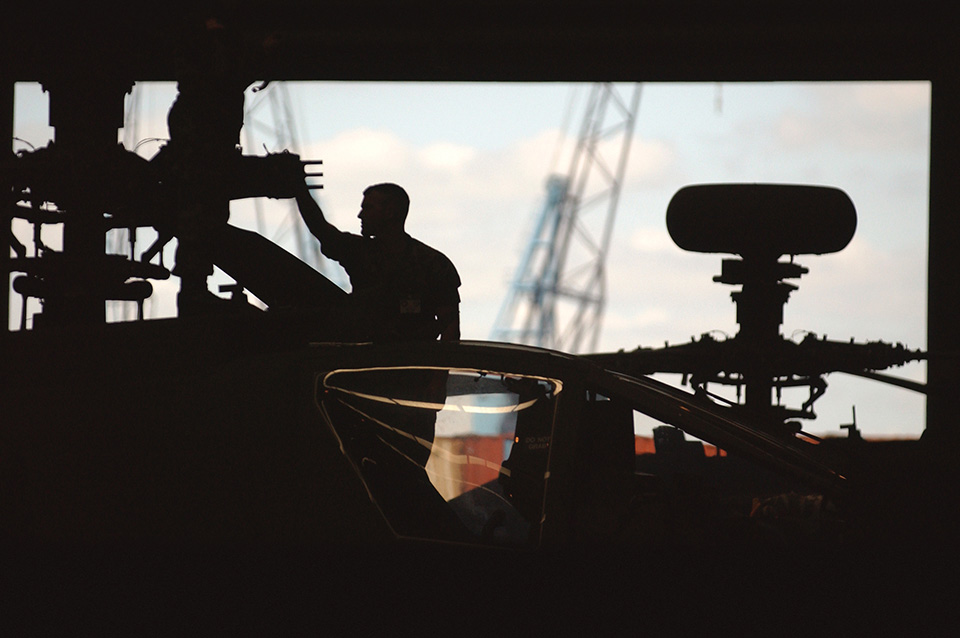 Army to Get Its Own Apache Attack Helicopters

Attack Helicopters are a huge asset to a commander especially in operations involving mechanised forces. These assets have been a part of the Air Force’s inventory in the Indian context, thereby constraining their optimal utilisation by mechanised force commanders. However, now with the induction of  HAL’sRudra, sanction given by the government to import six Apache AH 64 E Guardian attack helicopters and the project to manufacture Light Combat Helicopters, the army’s capabilities to field these versatile machines in an integrated battlefield is being given a boost. The author provides a full spectrum analysis of the issue.

The Army’s long-pending demand for the requirement of the state-of-art American Apache AH-64E Guardian attack helicopters for its Strike Corps for operations across the western borders is finally likely to see the light of day. The $930 Million contracts for six Apache AH 64E Guardian helicopters was signed during the visit of the American President Donald Trump last month. In addition to the Apache helicopters, the deal also includes weapons, radars and electronic warfare suites which constitute the most important components of an attack helicopter.

The Apache is today arguably the most advanced, potent and battle-hardened attack helicopters in the world with its latest Guardian model boasting of more powerful engines boosting range and loiters time, new drone control and anti-ship capabilities and AI-backed pilot assistance. It’s a very significant development for the Army for it will change the very concept of fighting mechanised warfare in the Indian context and provide the quantum jump in the combat potential of the Strike Corps and a major boost to its tactical fighting capabilities.

The army had initially projected its requirement for 39 Apache helicopters to cater for three squadrons for the three Strike Corps, but the Defence Acquisition Council (DAC) initially approved eleven and subsequently in August 2018 further curtailed the numbers down to six Apache Attack Helicopters (AH) only, probably due to financial constraints.  While a unit of six Apaches is not an ideal combat organisation from the tactical employment point of view, a beginning has been made and Army no doubt will subsequently pursue its case for greater numbers, based on its operational requirements. This case for six Apaches was processed as a ‘follow on contract’ of the earlier deal inked for 22 Apaches for the Air Force, eight of which have already been inducted. The induction of Apaches for the army is likely to commence in 2022 after the induction of 22 Apaches is completed.

Before dwelling on its employment philosophy, especially in the Indian context, it’s important to look at some key characteristics of Apache Guardian which impact warfighting and make it a true force multiplier and battle winner. The Apache 64E AH also known as ‘Apache Guardian’ is the most technologically advanced and lethal AH in the world today. It is basically the upgraded version of the Apache 64D-Block III, which even today continues to be the mainstay of US Military AH fleet.

The Apache Guardian has a lethal array of armaments which includes Hellfire anti-tank guided missiles and Stinger air to air missiles along with the capability to fire 70mm unguided rockets (Hydra) and 1200 rounds of ammunition from a 30mm cannon. A unique feature is the advanced Target Acquisition and Designation Sight and the Dome installed over the main rotor housing – the Longbow Fire Control Radar. This gives the Apache Longbow the ability to fire Hellfire missiles in fire and forget mode as well the capability to detect, classify and prioritise multiple targets simultaneously. Its latest technology upgrades make the Apache Guardian a versatile weapon platform with a multi-role, multi-mission, day and night all-weather strike capability.  It would be pertinent to mention here that the Tata-Boeing Aerospace Ltd has begun delivery of the Apache AH fuselage from its manufacturing facility at Hyderabad within one year of its set up. The fuselage will be transported to Boeings Apache manufacturing facility at Mesa in Arizona for integration.

The primary mission of attack helicopters world over remains to fight the land battle and support ground operations and its battlefield leverage is achieved through a combination of reconnaissance, mobility and firepower. Its clinching contribution to success in the battlefield is the ability it gives the commander to apply decisive combat power at critical times, virtually anywhere on the battlefield, in the form of direct fire at the point of decision facilitating ‘Effects Based Operations’.

While the Apache is ideally suited for mechanised warfare in scout and anti-tank roles as seen in the Iraq wars, its predominant role in close support of ground troops as played out in Afghanistan assumes significance. The Apaches were used extensively and with great success by the US forces during ‘Operation Desert Storm’ in roles as varied as anti-armour, to providing close air support and Suppression of Enemy Air Defenses (SEAD) operations by destroying Iraqi Early Warning Radars and SAM Sites.

A key element of attack helicopter employment philosophy is that they must operate as part of a combined arms team and not in isolation. This aspect was amply highlighted during the 2003 Iraq war when a deep strike raid attempt by a large number of Apaches on the Iraqi Armoured Division near Karbala failed miserably with huge losses. However, the same Apaches were successful in the same mission four days later when conducted in close coordination with the ground forces, artillery and fighter aircraft. The US Army Aviation Corps has accordingly modified its warfighting doctrine.

In the Indian context, the Apaches will play a very crucial role in the operations of the Strike Corps both in the deserts and the plains due to their organic capabilities. Apache Guardian is ideally suited for mechanised warfare in Scout and Anti-tank roles.  With the Indian Army’s Doctrine of ‘cold start’ or the ‘proactive strategy’ as the Government would like to call it, which is Pakistan centric, restructuring has been done of the Holding/Pivot Corps as the ‘first responder’ to enable quick and immediate action within 48-72 hours by using the integral assets at the Corps level like the indigenously developed ‘Rudra’ the armed Armed Light Helicopter (ALH). Also the recent reorganisation and concept of lean and mean Integrated Battle Groups (IBGs) whose operations have been validated both in the mountains and plains will need their dedicated and organic fire support elements in terms of artillery as well as attack helicopters.  A major combat exercise ‘Sudarshan Chakra’ conducted at the Corps level in the Thar Desert last year in November validated the employment of the Rudra attack helicopter in operations of a Strike Corps.

The Army is already in the process of inducting these armed helicopters developed by the HAL with two to three units already operational.  Though not a typical attack helicopter, it has an array of comparable weapon systems to include gun, rockets, air-to-air, and air-to-ground missiles (ATGM). The Rudra units are to form part of the Holding/Pivot Corps constituting a formidable offensive punch to the field force commander. Further, the LCH developed by the HAL is expected to be a milestone achievement. The LCH aims to gate crash the exclusive club of the state of art light attack helicopters capable of operating effectively at high altitudes including Siachen.

The LCH is a derivative of the Rudra and is being designed to fit into an anti-infantry and anti-armour role with the capability to operate at high altitudes (16000 feet), a distinct advantage over other attacks helicopters-the helicopter is expected to enter service this year. The LCH units will be the main punch of the manoeuvre force commander and will be inducted into the Army Aviation Corps and operate in support of ground forces both in the plains and mountains – during the Kargil war the only AH held (MI-25/MI-35) could not operate at high altitudes, where most of the conflict was concentrated. As per reports, initial clearance for five LCH for the Army has already been given by the Government while the overall requirement is much larger. The combination of Apaches, Rudras and LCH covering all types of terrain and threats will no doubt be a major game-changer for the Army in future conflicts.

The Army Aviation units and helicopters are located closer to their operational areas and along with the formations they are affiliated to, especially at the Corps level. During the war these units will require to operate from forward composite aviation bases, catering for security, maintenance, fuelling and arming facilities. The employment philosophy dictates the need to develop organizations that enhance aviation capabilities to support the concept of operations of field commanders and be tailored to meet the evolving operational requirements-hence the concept of Aviation Brigade with each Corps and not Bases as in the case of Air Force.

Soon the Army’s air arm, the Army Aviation Corps, will boast of formidable AH inventory from the Rudra armed helicopter to the state of art AH like the Apache and the LCH. The LCH with its high Altitude capability will be a force multiplier and a weapon of the decision in any future conflict in the mountains. The Apache AH is a game-changer and will be a powerful and decisive tool with the Strike Corp Commander – there is no doubt that in case of a future conflict the 22 Apaches with the Air Force would also be available to support the land forces operations, for this is the primary role of these AH. With the induction of such modern and technology-driven weapon systems, the Army will need to plan and work out appropriate employment philosophies, training and maintenance procedures suitable to the Indian environment to exploit the full potential of these battle-winning machines in the future.