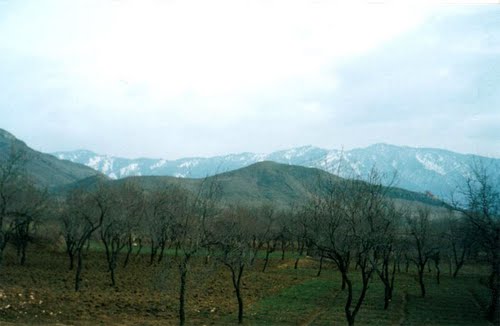 Breeze of Change from Tral in Kashmir

There has been a spate in the number of casualties that the terror establishment in J&K has borne in the past few months. The situation on ground also seems to be improving notwithstanding the attack on Amarnath pilgrims, which isn’t the kind of activity that would elicit a positive response from most quarters in J&K.

Amidst the continued aggression being displayed by security forces, the action to eliminate three terrorists in a remote cave stands out not just as an outstanding tactical operation, but also provides a few trends and indicators that emanate from it. The author, who has commanded the Corps in Srinagar, offers a concise analysis.

BREEZE OF CHANGE FROM TRAL IN KASHMIR

On 15 July 2017 in another surgical operation in Tral, South Kashmir, 42 RR (ASSAM), CRPF and JKP eliminated three terrorists heavily loaded with arms and ammunition. On the face of it this may seem like any other operation in which terrorists have been eliminated as the security apparatus is striving hard round the clock to maintain control. Nonetheless a deeper analysis shows why this operation and its attendant factors are different both in its conduct and potentially the aftermath. 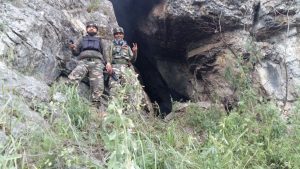 Entry to The Cave

Unlike typical hinterland operations in or around villages, this one took place well away from built up or inhabited areas. It was on Wusterwan ridge overlooking the Tral bowl, a little to the South of Dachigam Reserve forest or the National Park known for the Kashmiri stag – Hangul. The terrorists were hidden in a cave at an altitude of 2300 meters above MSL on the ridge line, the access involving a gradient of 70°. Far enough from the local population but close enough to be able to strike at either the National highway or the Anantnag – Pahalgam road. Popularly known as AP Road, this is the Southern route to the Holy Shrine of Amarnath.

One week ago there was a dastardly attack on a bus carrying pilgrims from Gujarat on their way back from the Holy Shri Amarnathji Yatra. In fact one of the critically injured also succumbed on 15 July 2017 taking the toll of fatalities to eight. This horrific attack was condemned the world over, with a large number of messages “I condemn the Amarnath Yatra killings” emanating from Kashmir itself.

There are two plausible reasons for terrorists taking cover in the mountains and forests away from the local population in the hinterland. First; pressure of security forces operations and second; uncertainty of popular support. With the outrage in Kashmir over the attack on pilgrims, it is possibly a combination of both these reasons.

The statement of Dr Vaid, DGP J&K that “we had specific input” is another positive sign. Those familiar with counter terrorist operations know that intelligence inputs come not only through pecuniary incentives, there are usually stronger factors like internecine fight amongst groups, rivalry, frustration, fatigue, shift in balance of power/control and so on. There is enough local outrage and frustration building up over the killing and disfiguring of SHO Feroz Ahmad Dar along with five J&K policemen at Achabal, Deputy Superintendent of Police Mohammed Ayub Pandit and Lt Umar Fayaz. The strong will demonstrated by Jammu & Kashmir Police to bounce-back even after the loss of several colleagues is certainly a contributing factor.

The weapons and ammunition recovered and the mixed foreign and local terrorists group composition are also revealing. Three AK 47 assault rifles, fourteen filled ammunition magazines, one radio set, and grenades and so on. This quantum is unusually high for hinterland operations. The vicinity of the hideout from potential targets along the AP Road (Southern route of the Amarnath Yatra) and the National Highway, and several security force bases in the area provide multiple target options. The huge quantity of arms and ammunition enables longer staying power and/or ability to go for alternative/multiple targets. The combination of foreign terrorist with local terrorist helps to make up for inadequacies in training and motivation. 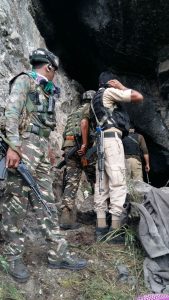 Standing Outside the Cave

It is to the credit of the forces that despite the terrorists being heavily armed, well disposed and poised for a big strike, they undertook the operation professionally and concluded it without any casualties on themselves. It is imperative that the security forces continue to focus on intelligence, force protection, effective implementation of SOPs and collaboration amongst themselves to stay ahead of the terrorists.

In the overall context, the Tral operation of 15 July 2017 has certainly provided some indicators of a decline in popular support for the terrorists. A week back, despite the domestic hype and headline on ‘One Year after Burhan Wani’ (also from Tral) and the propaganda videos from Pakistan virtually reinforcing one another, the situation was well within control. On the other hand, last Thursday there were images of one terrorist draped in ISIS flag being taken for his funeral doing the rounds. With strands of militancy driven by Caliphate – Sharia striving for political space in Kashmir, time is critical and good opportunities shall be fleeting at best. These positive trends need to be picked up at the strategic level, encouraged and taken forward.

Lt Gen Saha, former Deputy Chief of Army Staff is a highly decorated officer with a career spanning nearly four decades in the Indian Army. In his last assignment as Deputy Chief he adopted the strategy, “Win Indian Wars with Indian Solutions,” driven by a strong and unprecedented collaborative process involving academia, industry (including MSMEs) and the Army.