The issues in Maldives do not seem to be progressing as would be expected in most democracies. President Yameen has done little beyond doing away with the emergency that he had declared. There are no tangible efforts by him to engage with the opposition and find a path out of the imbroglio.

Meanwhile, the Chinese seem to be making the best use of the circumstances and establishing its presence on more than just one island. The author analyses the issues involved and examines the options that Indians may exercise. 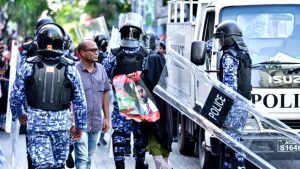 The recent crisis in Maldives has caused concern among the neighbouring states, including India. The nature of the problem remains largely political and within the country, however, it also raises questions on the constitutional frameworks and its limitations in Maldives. Relations between India and Maldives have not been smooth for quite some time. Given the fact of strategic inroads by China into the region, the problem carries strategic implications for regional politics.

In the last four years since the Yameen government has come to power in Maldives, the democratic structure of the state has faced serious questions on violation of constitutional frameworks, rising political power centralisation, increasing fundamentalism and abuse of power.

The origin of the present crisis lies in the judgment of 1 February, 2018 by the Supreme Court (SC) of Maldives, which ordered the release of nine political prisoners, including former Prime Minister (PM) Mohammed Nasheed and reinstatement of 12 parliamentarians who had been stripped of their lawmaker status by the Yameen government.

While the political opposition in Maldives applauded the judgment, it also questioned the credibility of President Yameen. The government imposed an emergency deploying heavy police forces, citing the judicial verdict as equivalent to an attempted coup. It also ordered the arrest of the Chief Justice. Interestingly, the same Supreme Court in 2013 was not questioned when it had annulled the results of 2013 Presidential elections by Yameen.

While these developments in Maldives have drawn much anticipated criticism from the major powers, India has been fairly reasonable. It has restricted its push to adherence to constitutional norms by the Yameen government. 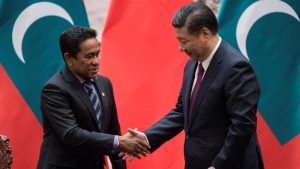 Under the present Maldivian government, China’s engagements in the region have increased in reciprocation to Chinese support for President Yameen.  Given the situation in Maldives, stakes for India are high and it needs to maintain political pressure while keeping the options for dialogue open.

A few facts of import are, in the last four years of Yameen’s rule, China has been actively cosying up to Maldives at the cost of India’s commercial and strategic interests. The preference for Chinese ‘capital and investment’ has witnessed a surge under the Yameen rule. The award of a contract to build an airport to a Chinese company, visit of President Xi to Maldives in 2015, key agreements for leasing of several islands to China, endorsement of Maritime Silk Route (MSR) as proposed by China and recently signing of Free Trade Agreement (FTA) between both counties, have become formidable pillars of a win-win relationship.

The legislation by the Maldivian government allowing foreigners to own land in the country if they invest $ 1 billion has drawn sincere concern from India. 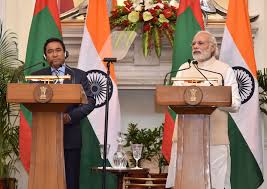 Maldives also has a good presence of Indian expatriates community which numbers around 25000. There are over 5,000 expatriates from the Maldives who live in India, in what is recorded as the largest population of Maldivians living abroad. Given the ethnic links and historical connection with South India, the present political crisis could also affect the civil society engagements between India and Maldives.

Unlike 1998, there seems no clear security threat from abroad in the present circumstances.  However, given the high geopolitical stakes in the region vis-a-vis China, the use of hard power cannot be completely ruled out.

The ‘wait and watch’ strategy of India and its diplomatic outreach seems to have drawn no substantive response from Maldives. While the crisis was going on, two foreign journalists- including an Indian national- were arrested by the Maldivian police for violating immigration rules and eventually ordered to leave the island nation.

Maldives has declined to send a ministerial-level delegation to India’s Defence Expo scheduled in Chennai from 11 to 14 April 2018. Further, as reported by Times of India (4 April 2018), Maldives asked the Indian government to take back one of the two naval helicopters Delhi had gifted to the Indian Ocean archipelago. Earlier, in February, Maldives declined India’s invitation to participate in the biennial naval exercise.

More recently, Maldives had sent out envoys to “friendly nations”, including China, Pakistan and Saudi Arabia. There is uncertainty too about India’s ongoing assistance to set up 10 coastal surveillance radar systems in the ocean archipelago.

While the emergency has been lifted in the country, the recent developments in Maldives raise concerns for India. The visit by Pakistan Army Chief Qamar Bajwa to the island nation and the efforts to build Joint Ocean Observation Station in Makunudhoo, not far from Lakshadweep by China, have not gone well with the Indian establishment.

Indian efforts need to be calibrated keeping in mind our primary security and geopolitical interests. In recent years, India’s effort has seen advances in maritime domain to include joint patrolling and humanitarian cooperation in the Indian Ocean region. As the crisis unfolds and becomes more complex, a sense of pragmatism must drive our policy actions, rather than allowing the situation to degenerate into another major crisis in our vicinity and power contestation between India and other major powers in the region.

Abhishek Pratap Singh holds PhD in China Studies from the Centre for East Asian Studies (CEAS), SIS, JNU, New Delhi. He was recipient of Junior Research Fellowship (JRF) from UGC, Govt. of India (GoI) for his higher studies and was also nominated for ‘India Youth Delegation, 2016’ to China by GoI. He was granted Indian Council of Social Science Research (ICSSR) research grant for his field trip to China in 2017 during which he visited many Chinese Universities in places like Beijing, Shanghai, Shenzhen, Wuhan and Chengdu.