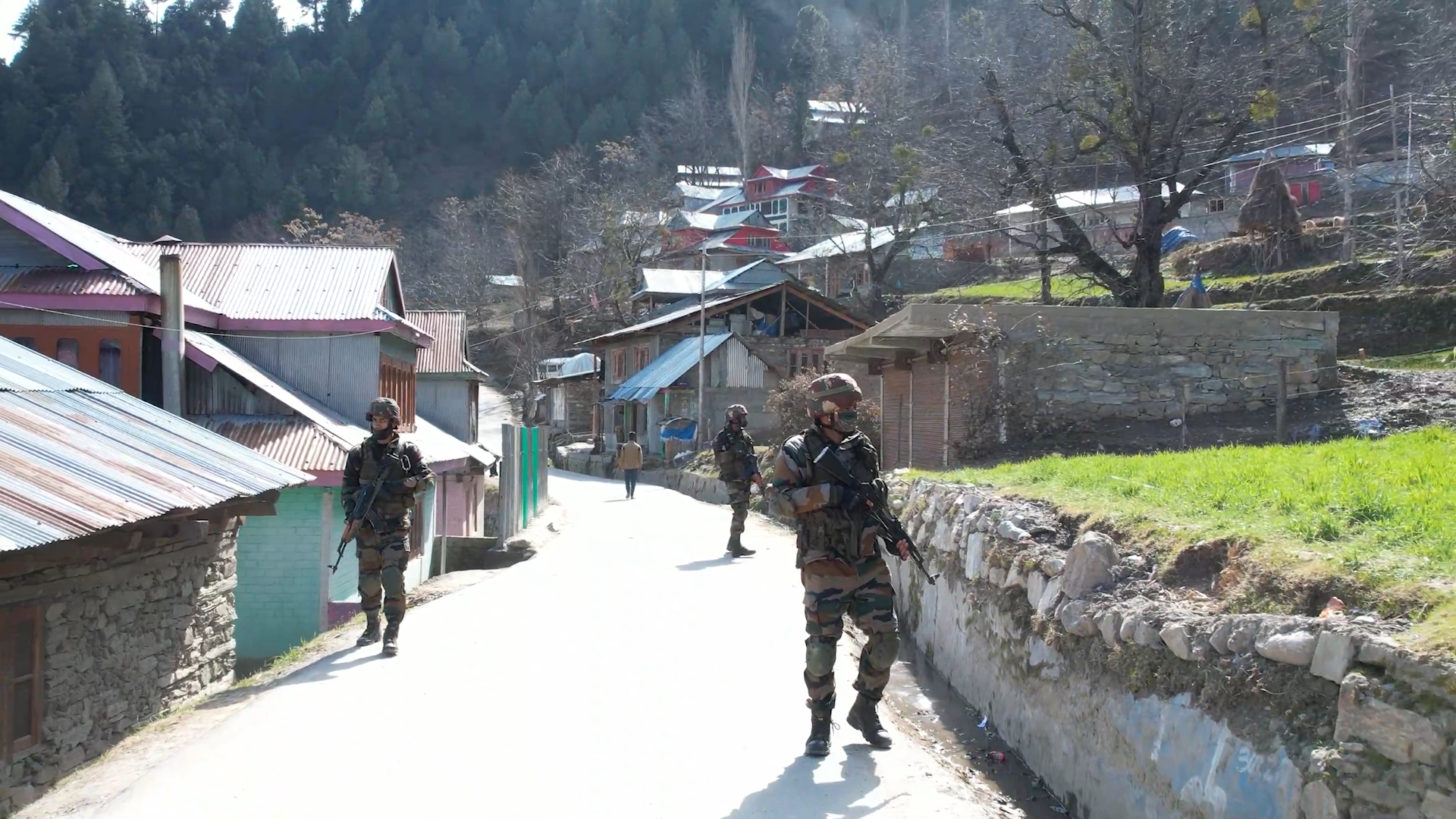 Dissecting Evidence of Pakistan’s Terror Export to Jammu and Kashmir

While the security situation in Jammu and Kashmir has improved considerably following the abrogation of Articles 370 and 35A of the Indian Constitution, Pakistan has in no way refrained from spreading terror in the region. Pakistan’s increasing frustration and desperation can be gauged from the number of incidents of terrorism that its mercenary agents have been perpetrating to keep the region disturbed. Pakistan continues to wage a protracted proxy war with the sole aim of ensuring that the Indian Army and other security forces remain increasingly engaged in counter-terrorism and internal security operations in Jammu and Kashmir. While ceasefire violations along the Line of Control (LoC) holds good since February last year, Pakistan is providing safe havens for terrorist groups. It confirms the fact that the leadership of groups such as Jaish-e-Mohammed (JeM) and Lashkar-e-Taiba (LeT), remain active, fanning trouble with its trained cadres in Jammu and Kashmir.

A number of notable terrorist incidents along the Line of Control provide a direct trail to the unabashed state-sponsored terror machinery operating from Pakistani soil.

On 5 September 2020, along the Line of Control in the Gurez sector of North Kashmir’s Bandipore district when a group of terrorists attempting to infiltrate from Pakistan-occupied Jammu and Kashmir were challenged, they abandoned their rucksacks and fled into Pakistan. One Chinese made Norinco QBZ 95 rifle and three ‘Type 54’ Chinese pistols were recovered along with Garmin GPS and the dead bodies of two terrorists. The analysis of the GPS recovered from the terrorists revealed saved waypoints namely Burzil Nala in general area Kamri of POJK, Gujranwala and Lahore, Pakistan, thus establishing Pakistan’s complicity in fomenting terror activities in J&K according to the First Information Report (FRI No. 05/20) and general dairy of the local police station.

The QBZ-95-1 is the official rifle of the People’s Liberation Army (PLA). Chinese-made QBZ 95 is now used by soldiers of the Pakistan Frontier Corps. 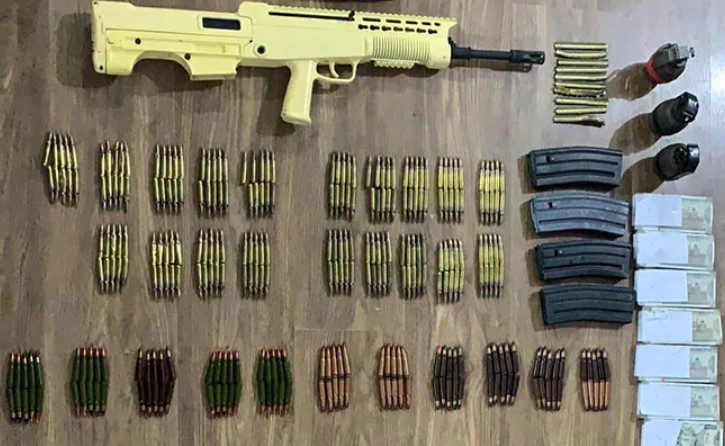 Indian security forces have made multiple recoveries of EMEI Type 97 NSR rifles manufactured by a Chinese company. A few days later, security forces made recoveries that also had Chinese markings. Two suspected persons who were travelling in a Mahindra Bolero from Jammu to South Kashmir were arrested while transporting one Chinese made Norinco/EMEI Type 97 NSR rifle, four magazines with 190 rounds one AK47 rifle with four magazines with 218 rounds and three grenades.

A major infiltration bid by four Pakistani terrorists in the Poonch sector of the Jammu region along the LoC was foiled by the Indian Army on 30 August 2021. According to FIR NO. 0215/2021 lodged in Poonch police station, on being challenged by Army troops, a fierce firefight ensued and one terrorist was killed. His body along with an AK-47 rifle has been recovered. The eliminated terrorist was identified as Muhammad Akram. An identity card found on him bore testimony to his Pakistani citizenship.
(Picture of FIR/Identity cards) 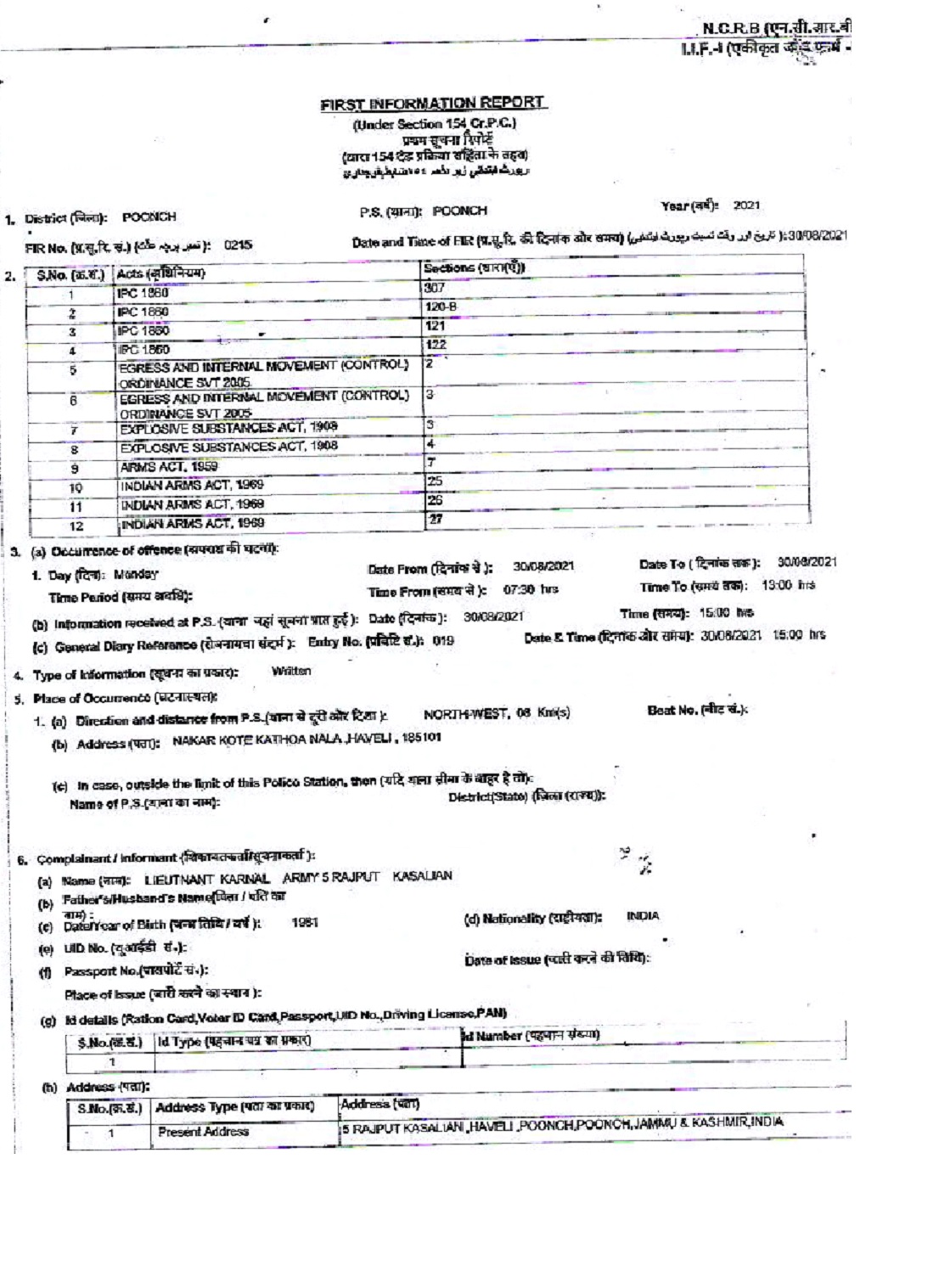 Earlier last year, an attempt by two Pakistani terrorists to infiltrate into India was foiled on 10 February 2021, in the Uri sector of Kupwara district of the Kashmir Valley region. According to FIR No. 15/2021 lodged in Uri police station, while one terrorist was killed in the exchange of fire with security forces, the other one ran back into PoJK. The neutralised terrorist was identified as Sarfaraz Mir, a resident of Mohajir Camp in Muzaffarabad, PoJK. An identity card issued by the Pakistani government, which was found on him, bears this out. A mobile phone (IMEI No 354200083661775 and 354200088661770) with a Pakistani SIM Card (SCOM GSM-89410051061124120796) besides arms and ammunition was also seized (see pictures of proof). 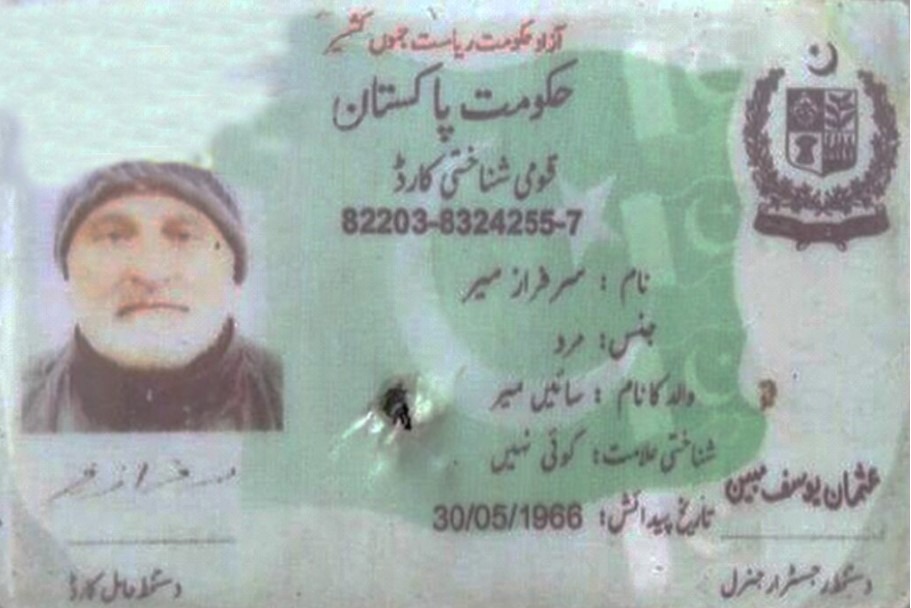 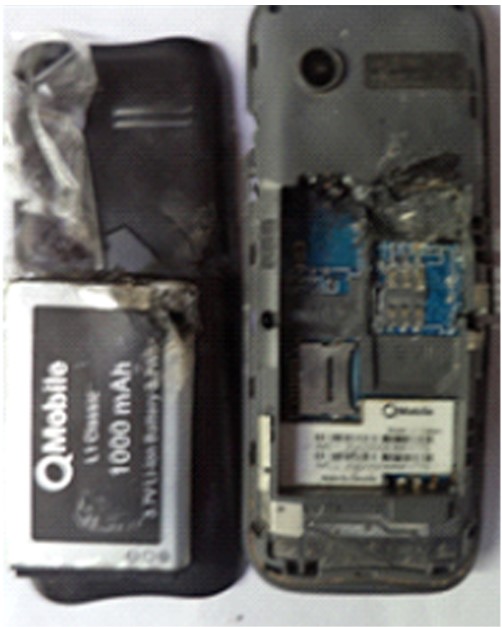 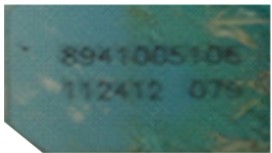 In another incident in the same Kupwara district in north Kashmir’s Machil sector, three Pakistani terrorists were killed and one managed to run back towards the

POJK side during a failed infiltration bid along the Line of Control (LoC) on 8 November 2020. Warlike Stores – two AK rifles with two magazines and 60 rounds, a pistol with two magazines and 29 rounds, a radio set and Rs 50,000 were seized from the site. Besides, a diary indicating the planned infiltration route and food items made in Pakistan were recovered from the eliminated terrorist, as per FIR No. 315/2020 lodged in Kupwara police station. 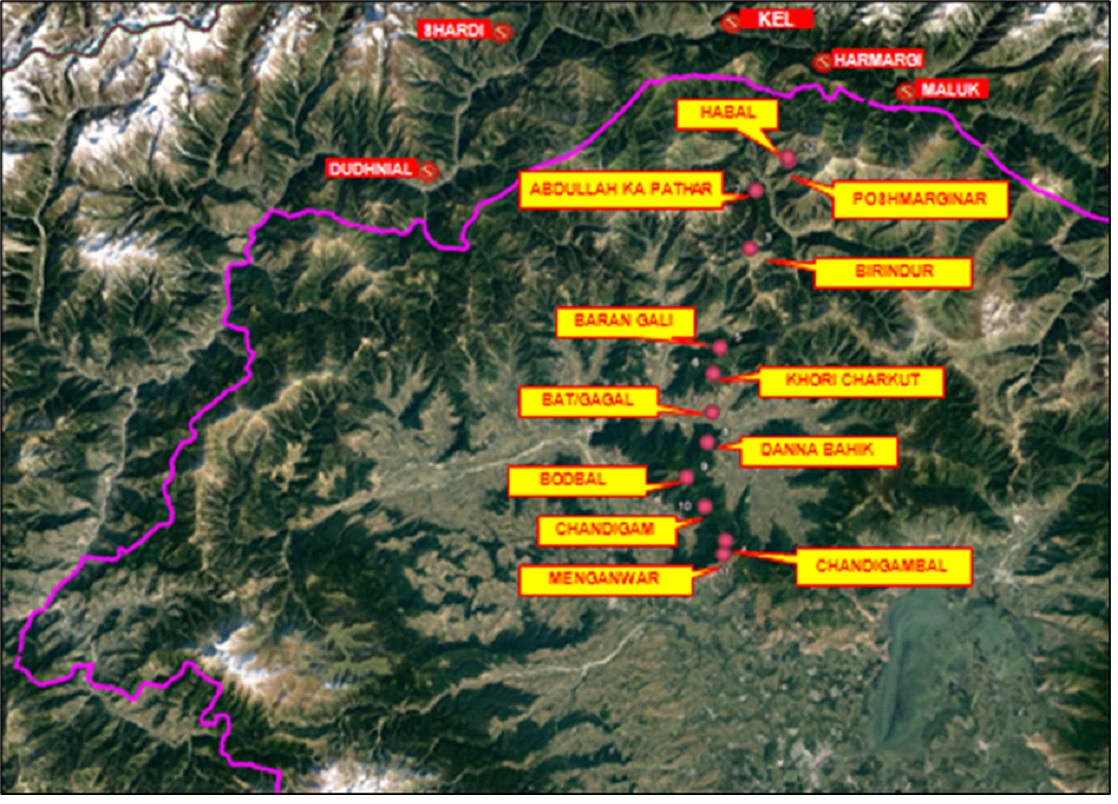 Infiltration routes based on recovered handwritten documents revealed that the coordinates suggest that they had planned to infiltrate from Pakistan Occupied Jammu and Kashmir. Details of the handwritten route chart are given below: 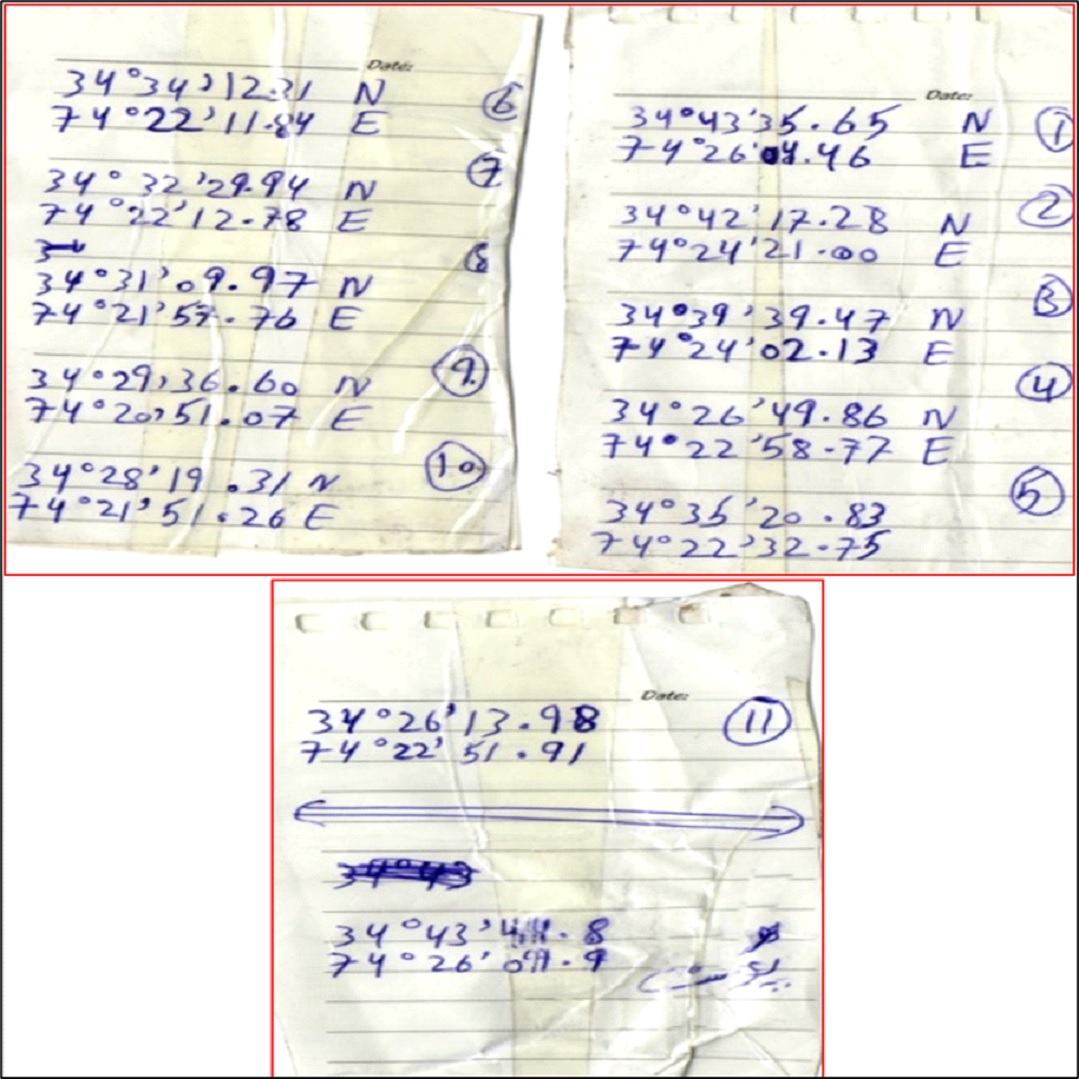