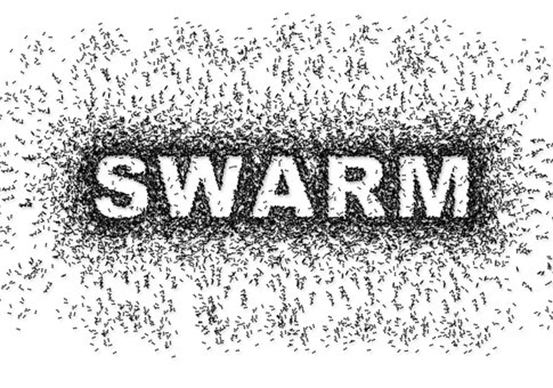 Drone Swarms: The Next Generation Military Weapon Based on Nature’s Bounty

Would it be more correct to state, ‘Technology’s ingress in the battlefield’ or is it more appropriate to say, ‘Technology has overtaken the battle space’. The way Swarms of UAVs can be employed in combat is phenomenal. The author compares the most familiar methods that birds and bees practice to explain the employment of drone swarms.

Drone Swarms: The Next Generation Military Weapon Based on Nature’s Bounty

Her hardest hue to hold.

Her early leaf’s a flower;
But only so an hour.

Then leaf subsides to leaf.

So Eden sank to grief,
So dawn goes down to day.

Nothing gold can stay.”
― Robert Frost

Jayaram MA, from the Siddaganga Institute of Technology, Tumkūr, Karnataka, observes, “when it comes to optimization, nature does it better. Many optimization algorithms such as ant colony, bacterial foraging, fish schooling, particle swarm and honey bee clusters, are all nature inspired”. Our inventions, therefore, are mere ‘leaves from Nature’s Bounty’. This sentiment is amply exhibited in Leonardo da Vinci’s potential bio-mimicry on birds in the 1480s when he designed the Ornithopter for human flight. Although it was never created, it was nevertheless, pioneering in exhibiting how a man could fly.

Recall with glee the story of the “Birds and the Bees”, that metaphorically explained reproduction! Did one imagine then, that Biology would tip Physics and show the way for a discovery transcending human intelligence many times over?  Biologically Inspired Engineering (BIE) is becoming a reality. Swarm Drones comprise a group of micro or mini-drones controlled collectively by human operators but acting autonomously within themselves. Compared commonly to a hive of bees, geared towards a single objective and yet capable of autonomous functioning in relation to other bees. Group intelligence, exhibiting collective wisdom of many minds, functioning in unison for the desired end result caught the fancy of scientists, who, referred to this as ‘Swarm Intelligence’ (SI), the beginning of a new dimension into the future.

The opportunity of tapping the explicit mind of each entity in the swarm to undertake autonomous tasks without being dependent on a central command precludes being subject to Electronic Counter Measures (ECM) like jamming. Swarm robotics is the new frontier in automation. It revolutionizes the manner in which autonomous robots can function in an eco-system by their value addition by combining with other robots, drones, sensors, networks and data. 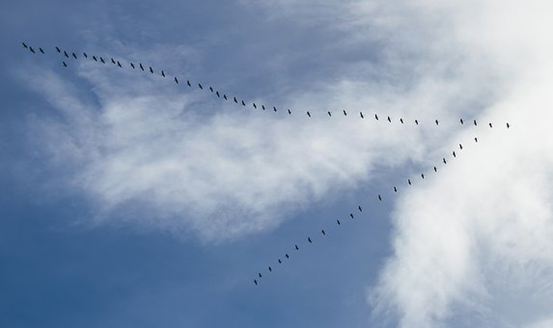 Scientists working with autonomous vehicles power the machines by decentralized algorithms, informing its neighbour of its location in time and space. The concept has been adopted from what is known as ‘Stigmergy’, wherein animals leave signals behind for others to react, affording considerable mission flexibility, where the mission need not be aborted post-launch if some drones in the swarm were to fail. The balance re-configures and the swarm continues.

Militaries usually adopt societal scientific inventions. Just a couple of days ago, Australia announced, “Google startup, Wing, beats Amazon by launching delivery service via drones in Canberra”. The news is going to revolutionize marketing. A number of nations as per their requirement through talent hunts and hackathons, have been experimenting on the contingencies for the utility of swarms amongst others, for processing and harnessing large data, for high performance parallel processing, prosthetic dexterity, for emergency services and tackling wildfires, policing by monitoring, transportation safety and disaster management.

As per TechFerry, SI in telecommunication systems uses autonomous computing networks which self-organize and self-configure, adapting to dynamic conditions of connectivity, traffic and service.

In the transportation systems, traffic patterns at intersections use fixed timers and fixed length of signals to manage crossings. At densely populated intersections and at peak traffic, variable and adaptive timers using the auto-routing feature, a result of feeding algorithms using SI, different from sensor networks used in embedded technology. Smart cities utilize the services of SI to provide seamless services to the taxpayer. 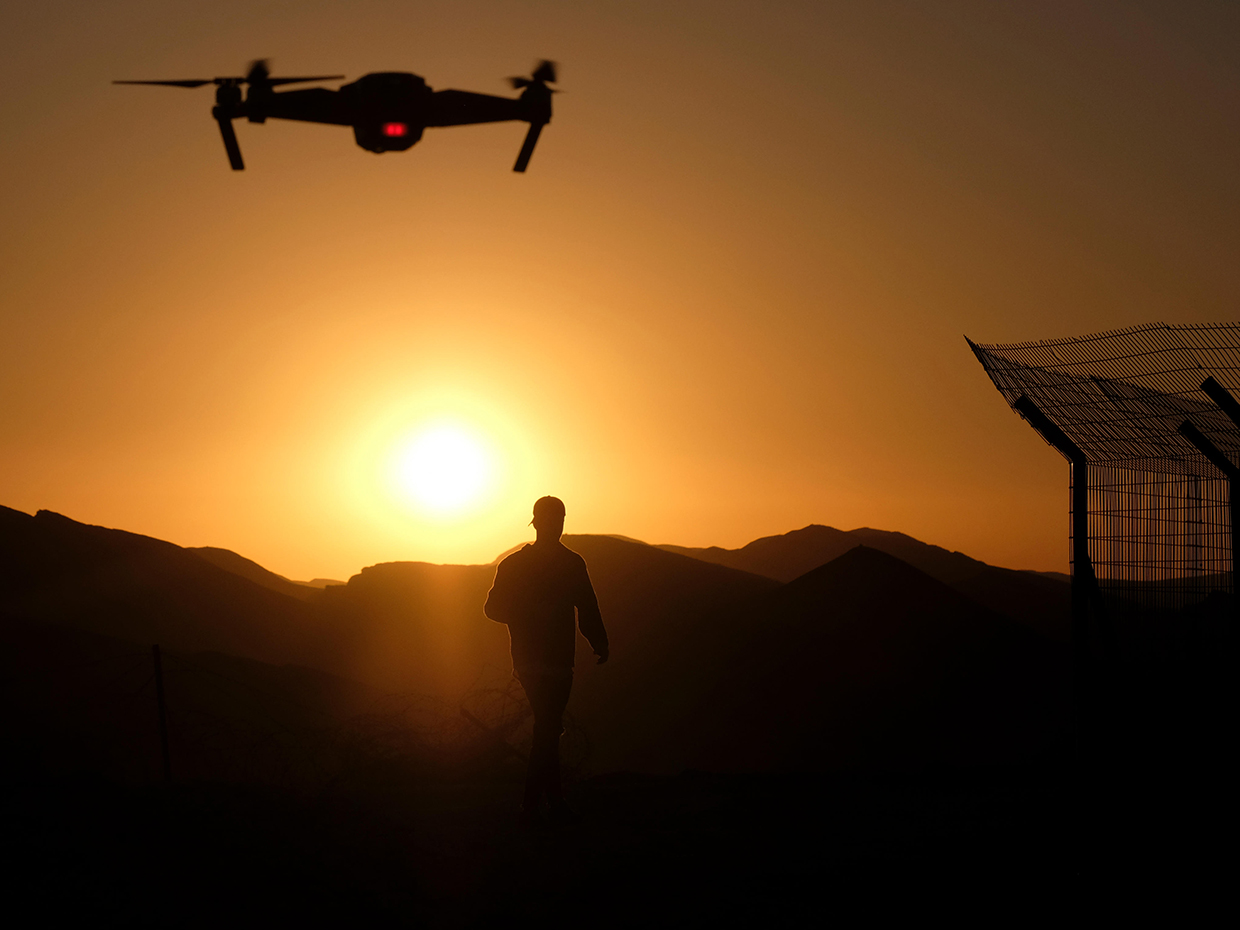 In the military application of SI, Swarm Technology when committed to battle will have strategic implications. The technology would operate at the Planning and the Execution stage. At the planning stage, it could generate myriad options on the course of action to be undertaken, the target profile for the impending attack, changing the time, distance and space paradigm as compared to a physical force. The targets under attack could distort the defender’s canvas and once delivered, upset the defender’s complete design of battle. Resource allocation, deception and time allocation matrices will need rethinking.

At the execution stage, the attacker’s stealth, extended range due to enhanced endurance and radius of action with almost no signatures make for a very potent weapon system. The autonomous mode with enhanced efficiency, flexibility, robustness and reduced cost provide for a perfect recipe to be exploiting during the war and for operations other than war. The loiter time and radius of action would depend on the charge that each of these drones in the swarm carries. For a longer loiter time, a mid-mission recharge mechanism is being worked out.

The distinct layers of technology absorption in the military commence with the development stage where, either the DRDO or the academia become the lead agency. In the next layer, of deployment post trials and zero-day plug-ins, the technology is embedded into the system as a facilitator. In military parlance, this layer falls under the ‘Resource’ head and could effectively be used as a force multiplier. The third is the execution layer, where, this resource is factored in the plans for delivering the desired end state. With deft handling and technology maturation, the effectiveness index and success of operations will only rise.

The resilience factor of the SI also makes it an attractive military tool. It’s plug and play formatting, which in a manner of speaking allows the dynamic addition of processors, gives it the military advantage during hostilities when wastage rates are high. The swarm is designed to self- heal even after the loss of a few numbers. Through Computational Intelligence (CI) using models of the human brain, it creates an Artificial Neural Network (AAN). This accords it the characteristics of flexibility, robustness and scalability. The network riding on the autonomous nature of the resource learns continuously from the environment and updates its surroundings dynamically, leaving the centralized controlling human out of the loop. The advantage it accrues for emerging scenarios and changing battlefield dynamics is axiomatic.

From reconnaissance to re-working the strength of an Infantry section, the US Army has jostled with the concept of drones in the application of swarms over the sea to locate submarines, eliminating enemy missile systems and forming the defensive shield for incoming hypersonic attacks. The US micro drone Programme called ‘Gremlins’ uses drones shaped like missiles for reconnaissance over large swathes. Low-Cost Unmanned aerial vehicle Swarming Technology (LOCUST), a prototype tube-launched UAV is another ongoing project for autonomous swarms to be sharing information in defensive and offensive scenarios.

Raytheon’s Miniature Air Launched Decoy (MALAD), as the name suggests, pre leads an airwave much as the chaffs released by an aircraft during an incoming attack. The MALAD attracts the incoming attack onto itself and facilitates own combat aircraft to concentrate on the impending mission.  A professional force would utilise these resources as a packet during operations to offer its operational flexibility and commit low-cost resources for exponential results.

China exhibited swarm technology to the world at the opening ceremony of the Winter Olympics at Pyeongchang in 2018 using Intel’s pre-recorded airing of drone swarm display comprising 1218 quadcopters. Though the drones were individually connected via radio frequencies (RF) to a central computer, which controlled the movement and position of each drone to form the dynamic shapes, for safety, there is no requirement for centralized control.

As per the Russian Federation report of 8 January, 2019 from Syria, “Security system of the Russian Khmeimim air base and Russian Naval CSS point in the city of Tartus successfully warded off a terrorist attack with massive application of unmanned aerial vehicles (UAVs) through the night of 5–6 January, 2018”. The analysis of the attack revealed that terrorists operating 50 km away had used the explosive-laden UAV swarms and satellite navigation for remote control explosive dropping.

This awakened the world to the reality that the use of swarm technology was not mere fantasy. From Kamikaze style self-destructing drones to moderators jamming electronic signals, the swarms can be used in all three mediums of air, land and sea. 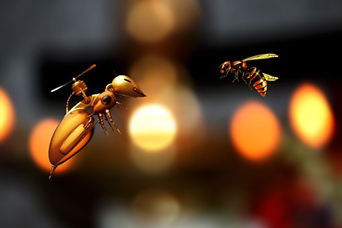 The dark and deep web, requiring special software to assess reflected its wicked potential many years later as the flippant cousin to the comforting Internet. Likewise, swarm technology also displayed its soft underbelly during the Syrian attack on the Russian forces. Not only was there a possibility of the technology passing in the hands of non-state actors, the enhanced features like facial recognition by factoring enhanced autonomous algorithms, could kill by letting the swarms make independent target decisions.

Succinctly articulated, R. Shashank Reddy, a researcher at Carnegie India, stated, “In the Indian context, development of technology also mandates a change in mindset”. For otherwise, the changing nature of war will have left us gazing for solutions, as did the ‘Black Hole Theory’, the current subject of immense excitement, many years after it was first propounded.

The scenario alludes to machine control. Taking the man out of the loop is a dreadful mistake that the developers had better understand now. Lest, the visionary historian, author of two dazzling bestsellers on the state of mankind,‘Yuval Noah Harari, in his breathtaking book “Sapiens, A Brief History of Humankind”, have to re-write the epilogue for the benefit of the follow on generations to read; “100,000 years ago, at least six human species inhabited the earth. Today there is just one- Us- Homo sapiens”.  The narrative may need to be changed to:  “…Today there are just two of us, the Homo sapiens as slaves and the Machines, who govern us”! And again, churning out another bestseller last year, ‘Homo Deus: A Brief History of Tomorrow’ with a semi-computerised human as the protagonist.

Whoever said that the future was not scary- Prophecy or fantasy? You decide.