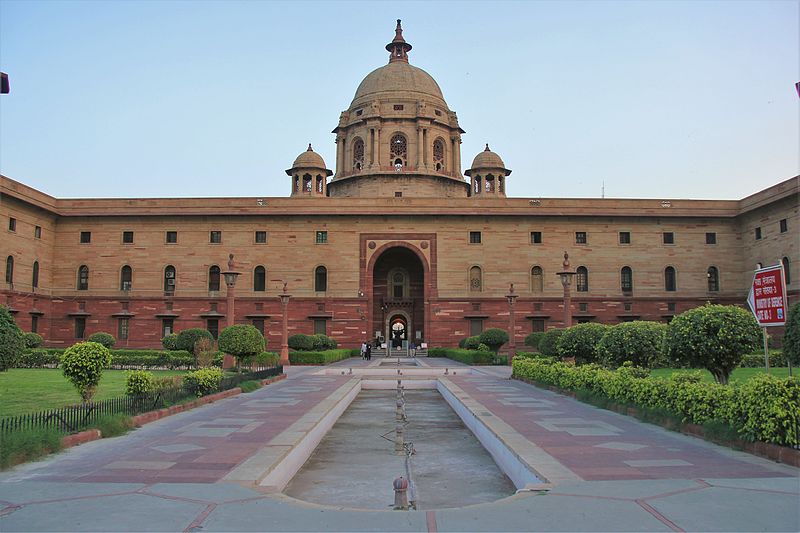 The Ministry of Defence can surely wave its performance card to tout its achievements, notwithstanding the pandemic we are faced with. Policy issues are being continually addressed, but Atmannirbharta (self-reliance) will ultimately depend on our ability to design, develop and manufacture the bulk of our requirements. The Defence Corridors will need to address these issues and be the hubs where varied disciplines, a variety of professionals, entrepreneurs, industry doyens, and access to finance are interconnected within the hubs being created.

In pursuance of the budget announcement of 2018-19, two Defence Industrial Corridors in the country, one in Uttar Pradesh and another in Tamil Nadu are to be developed. This was in keeping up with the emphasis laid on modernising and enhancing the operational capability of the defence forces. The Finance Minister at that time, also announced that the government would bring out an industry-friendly “Defence Production Policy 2018” to promote domestic production by the public sector, private sector and MSMEs. The initiatives were aimed to develop and nurture India’s intrinsic defence production capability to make the nation self-reliant on its defence needs at a time when private investment in defence production had been opened up, including liberalising foreign direct investment. Thereafter, the intent and resolve of the government have continued to manifest in a manner never seen before.

A slew of defence reforms announced by the Finance Minister under a pandemic stressed economy in May 2020 stood out to reinforce the vision. These included enhancement of the FDI limit in defence production being raised to 74 per cent from 49 per cent through the automatic route as part of reforms in the defence sector to boost self-reliance, ban on import of certain defence equipment, earmarking budget for indigenous procurements and corporatization of defence ordinance factories not forgetting the stress on the time bound defence procurement process and faster decision making by setting up of a Project Management Unit to support contract management.

In perhaps the most defining reform in the defence procurement area, the government announced to notify a list of weapons or platforms that will be banned for imports with year-wise timelines. This would mean that India will have to compulsorily develop technology for those defence systems/platforms. This in itself is a big boost to the Make in India initiative. The culmination of all these was the unveiling of the Defence Acquisition Policy 2020, albeit the earlier Defence Procurement Procedure 2016 in a new avatar, by the Minister of Defence with a visible push forward for higher indigenous content and encouraging initiatives for local material and software as a part of Make in India.

Now if the thread of Defence Corridors is connected to all these reforms it reflects a clear vision towards “Atmanirbhar Bharat” (Self-reliant India) a clarion call given by the Prime Minister. Setting up of Defence Industrial Corridors would catalyse indigenous production of defence and aerospace-related items, thereby reducing reliance on imports and promoting export of these items to other countries. This will lead to achieving India’s goal of self-reliance in defence, generation of direct/indirect employment opportunities and growth of private domestic manufacturers, Micro Small and Medium Enterprises (MSMEs) and Startups.

With all this as a supporting framework, the Defence Corridors now should gain momentum and not be reduced to a labyrinth. What has been the progress, what is the road map and what should be the way ahead is something which needs to be examined.

Subsequent to the announcements, six nodes in Uttar Pradesh Defence Corridor viz. Agra, Aligarh, Chitrakoot, Jhansi, Kanpur and Lucknow have been identified. Similarly, for Tamil Nadu Defence Corridor, five nodes viz. Chennai, Coimbatore, Hosur, Salem and Tiruchirappalli have been identified.  Investments of approximately Rs 3,700 crore have been announced by Ordnance Factory Board and private industries for Uttar Pradesh Defence Corridors and investments of approx Rs 3,100 crore were announced by OFB/DPSUs & private industries for the Tamil Nadu Defence Corridor. Incentives to private players and foreign companies are provided under the respective state policies. A closer look at both the corridors trajectory to assess ground zero.

As reported in The Print on 12 April this year, land banks have been identified and allocation to 17 companies has started and 22 out of 67 MoUs signed have materialised which is very encouraging. However, the report also highlights that while Indian companies are coming forward, big international names are still shying away from investing despite the fact that over the last few years, the government has opened up the defence sector for foreign investment as part of its push to encourage global manufacturers to produce locally.

MoUs are in place with IIT-Madras and DRDO as Knowledge Partners for the project. The scope includes setting up common testing facilities, common infrastructure, common certification centres, and training facilities as also sharing of ideas, resources and expertise for the development of the defence corridor.

Many private industries as well as PSUs have evinced interest and proactively looking at Investments. The power surplus state has impeccable figures in the manufacturing sector be it automotive, electronics or textiles and has extensive aerial and sea connectivity to boast. With a well-established existing ecosystem of manufacturing of aerospace components, defence PSUs network backed by robust policies and skill development the prospects of the corridor evolving in a potential global defence hub are enormous.

With the convergence far too much visible in the political intent, private industry, PSUs, ordnance factories, state machinery and other stakeholders the risk is only to ensure that the speed of progress is maintained albeit in the right direction i.e., lest the entire endeavour becomes a labyrinth instead of corridor.

There are certain peculiarities connected to defence procurements, though well understood, yet merit being taken note of as these are fundamentally different from any other industry and deserve due cognizance:

For the success of these corridors there are certain imperatives too which cannot be compromised. 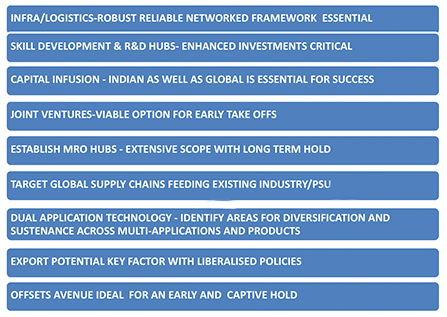 Each one of the above is critical. The right infrastructure, support for a vibrant supply chain network, skill development, involvement of established national and global players to bring in capital and viable projects can give the required traction. The need for identifying the right technologies with dual applications and niche domains for R&D and roping in the academia with focus will yield dividends.  With peculiarities unlikely to mellow down and imperatives likely to intensify a three-pronged strategy for the evolution of these corridors is a pragmatic option to be successful and move towards the desired end state. There is a need to identify short term, medium-term and long-term roadmaps keeping existing capability, requirements, technology, capital and infrastructure development in mind. It will also help in the development of clusters with supporting eco-system around them.

The short-term target should be low hanging fruits where the requirements, demand and capability are well established, known and only needs setting up in an early time frame. It’s primarily the revenue requirements for day-to-day sustenance of the defence forces to include integrated clothing, anti-mine, night sights, binoculars, cameras, protective gear, habitat, drones and so on. Tapping the supply chain of ordnance factories is the fastest way.

The medium-term should be focussed on where demands and requirements are tentatively firmed up and technology infusion, infrastructure, skill sets are required to be beefed up. Upkeep, maintenance efforts and requirements of existing equipment and platforms are the core areas. Robotics, communication devices, instrumentation, sighting systems, assemblies, sub-assemblies for overhauls, small arms, multi-utility vehicles and of course, the supply chain of PSUs involved in upgrades and modernization are the options.

The long-term effort should be directed towards capability building by way of replacement of existing weapon platforms whether it is radars, guns, helicopters, or heavy armoured fighting vehicles. These will not only require capital infusion, joint ventures, ToTs, R&D efforts but also the establishment of sophisticated infrastructure with supporting testing facilities and quality validation as well. Investment in R&D towards the development of niche technology such as AI, chips, machine learning, NLP, quantum informatics, neurosciences, bio-tech and others is a must.

An illustration to give a broad overview and insight is offered beneath: 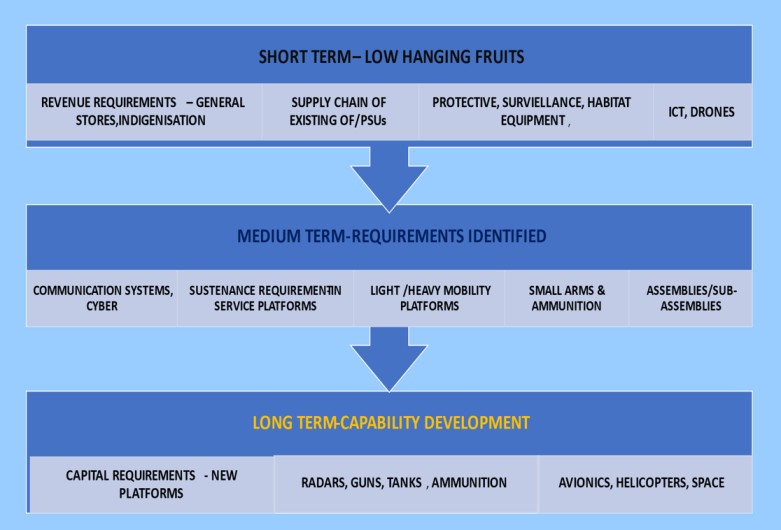 There is no doubt that it’s a well thought out design for achieving self-reliance through these corridors and is perhaps the only way to reduce dependence on imports and in the process create a state of the art infrastructure, manufacturing hubs, technology hot spots and generate employment. There is also a lot of convergence amongst stakeholders to carry this initiative ahead. The integration of the private sector in defence, which was a weak link will get suitably addressed. There will be a need for sincerity and smartness with some out of the box solutions and decision making to maintain the momentum and raise the bar in a calibrated manner.