Garden Reach Shipyard Looks for Long Strides Along with MSEs

Garden Reach Shipbuilders and Engineers (GRSE) was founded in 1884. Since then GRSE has built 784 platforms which include 103 warships for the Indian Navy, Indian Coast Guard and Government of Mauritius. Rear AdmiralVK Saxena (Retd) took over as the CMD in March 2017.GRSE is the first shipyard in our country to deliver a warship to a foreign nation. Today, the shipyard has undergone Modernisation with an aim to build quality ships in a reduced timeframe with Modular Construction Technology. Captain DK Sharma(Retd) of BharatShakti.in interviewed the CMD GRSE to ascertain details of the shipyard’s current priorities and future plans.

Captain DK Sharma: (DKS):  You are one of the biggest shipbuilders we have in this country; take us on a brief walk across GRSE’s milestones during your tenure. 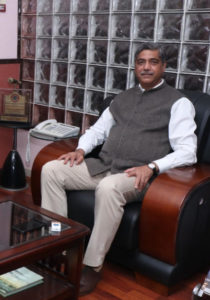 R AdmV K Saxena Retd, CMD GRSE: I took over as the Chairman and Managing Director of GRSE with effect from 1 March 2017. In the last three years, my team successfully launched GRSE’s IPO and the shares of the Company were listed on both BSE and NSE on 10 October 2018. GRSE became the first and only Indian shipyard to make and deliver 100 Warships since 1960 when we delivered IN LCU L-56 (Landing Craft Utility-LCU MK IV class ships) in March 2019. We have since then delivered three more Warships. GRSE has increased the company revenues from Rs. 927 crore in FY 2016-2017 to Rs. 1378 crore in the FY 2018-2019 registering a growth of 48.65 per cent and considerable increase of 309 per cent in Profit After Tax during the last three years. For the half-year ending September 30, 2019, the company has notched up revenues of Rs. 606 crore in the first six months of this year.GRSE has recently received orders for construction of four hydrographic Survey Vessels (large) and eight Anti-Submarine Warfare Shallow Water Crafts for Indian Navy.

The order book position of the company as on 30 September 2019 is around Rs. 27,400 crore. There are a total of 19 warships under construction. GRSE plans to deliver seven ships against three projects in this financial year. GRSE has at this point of time six projects that are underway viz., five projects of the Indian Navy and one of the Indian Coast Guard.

DKS: Could you please tell us which are the major projects that your yard is handling now/ ships under construction etc.?

CMD GRSE: The order book position of the company as on 30 September 2019 was around Rs 27,400 crore. GRSE has at this point of time six projects that are underway viz., five projects of the Indian Navy and one of the Indian Coast Guard. Under this there are a total of 19 warships under construction.

DKS: Will you be able to meet your deadlines in terms of timely deliveries? We have heard that the fourth of the P-28 ASW patrol frigate is to be commissioned soon in early 2020?

CMD GRSE: One of the key objectives of the Government of India behind this Project 28 was to achieve high level of indigenous capability in the development and manufacturing of the warships and its weapons which you will agree is an important step towards self-reliance for country. The key highlight and the achievement of the Project 28 is that its India’s most indigenized warship project with an indigenization level as high as 90%.

In an era where the technology changes and gets sophisticated almost on a daily basis, it’s vital that India’s defence capabilities stay in line with the best of world technologies prevalent at that point in time. With the delivery of ASW Corvettes spaced out between one to two years, it’s imperative that the warships being delivered have the latest available technology both from a systems and weapons perspective. Each of these ASW Corvettes is equipped with increasingly new design concepts for improved survivability, stealth and maneuverability. TheP-28 project aims to make corvettes that are to serve as the frontline warships and though its primary task will be ASW, the vessels will also be deployed in anti-surface warfare and Anti-Air Warfare. Final Machinery Trial (FMT) of the ship successfully completed. Delivery of the ship is planned in January 2020.

DKS: What about the area of exports. How has it been so far and what orders do you have at this point in time?

CMD GRSE: GRSE is the first shipyard to export a warship from India – the CGS Barracuda to Mauritius in 2014. GRSE is getting a lot of thrust from the Government of India and we are in dialogue with number of friendly foreign countries through different channels. We are engaging with countries in Africa and Asia for building Warships. You would know that the warship projects are not small value of couple of crores and they are generally finalised at the highest levels of the foreign country. With persistent efforts, and with the support of the government, we are sure that some of the orders shall come our way. But at this point of time, we do not have any warship export orders in hand. 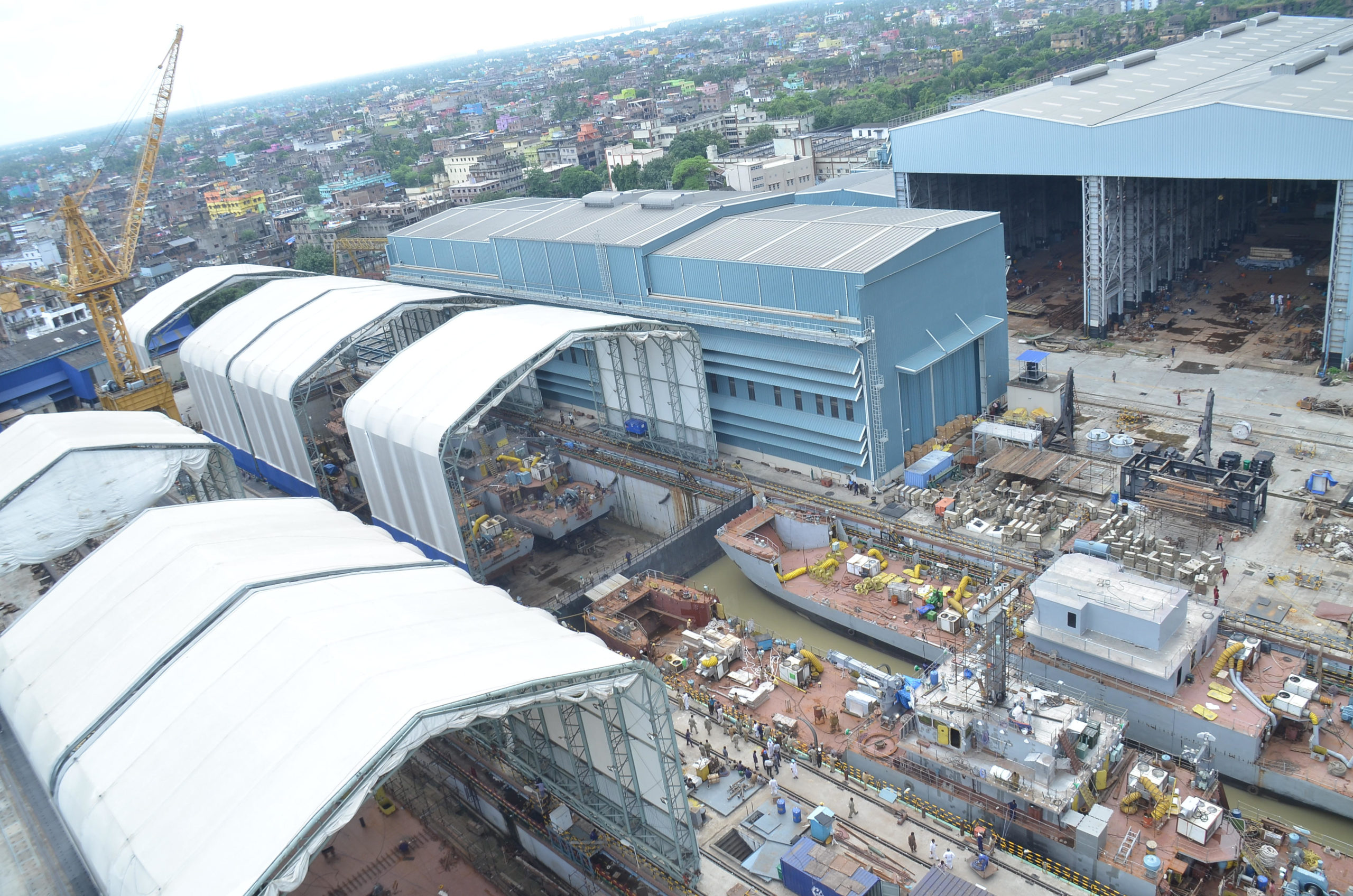 DKS: What are your expansion plans both in terms of requirements of the Indian Navy and Indian Coast Guard and also shipping assets for our merchant marine?

CMD GRSE: We are primarily builders of warships. However, we are also looking at building ships/vessels for the Inland Waterways Authority of India. In India, the Defence shipbuilding order book is expected to grow 8-10% CAGR over the next five years according to CRISIL Research. It is estimated that the Indian Navy and Coast Guard plan to have fleets of 200 ships each by 2027-28.

The shipyard has recently completed its Modernisation with an aim to build quality ships in reduced timeframe with Modular Construction Technology. State of the Art facilities have been created, wherein, post major modernization and infrastructural augmentation, GRSE now can construct 20 ships (i.e., eight large ships & 12 small ships) concurrently.This includes construction of four Large Ships & five Small Ships at Pre-Launching Stage and four Nos. Large Ship &seven Small Ship at Post-Launching Stage. Upgradation of Infrastructure of Raja Bagan Dock (RBD) unit of the company is underway. On completion of this upgradation project at RBD Unit by 2022, the shipbuilding capacity will increase from 20 to 24 ships concurrently. GRSE also has a full-fledged facility for construction of various types of boats as well.

Considering the nature of business, shipyard has plans to expand its existing infrastructure facilities in the form of capital additions through annual CAPEX Route. Refit/ Repair is also a focus area.

Under favourable business conditions the company is fully ready to explore other upcoming domestic orders for building other ships, barges and big trawlers etc.

DKS: What is the system you have in place for supporting MSMEs and indigenisation? How do you nurture them, ensure quality deliverables, and what stage do you incorporate them in your projects?

CMD GRSE:  GRSE’s major procurement accounting to approximately 70 to 80 % project material cost comprises systems and equipment’s like Weapon System, Communications Systems, Propulsion Systems, DG, Air-conditioners & Raw Materials etc., which are specific to project based on the Technical Requirements and selected by the Customer. Apart from these, company is procuring yard materials, items for Non-ship-building activities/ internal requirements of GRSE/ Standard (COTs – Common of the Shelf) and majority of services required for shipbuilding and maintenance from MSMEs thus also increasing indigenous content.

In line with the directives of the Govt. of India and with a view to encourage participation of MSEs in GRSE’s shipbuilding and other engineering manufacturing activities, GRSE has implemented the Micro, Small & Medium Enterprises Order, 2012 in August 2012. After some initial hiccups, the implementation of the MSME policy has progressed smoothly with GRSE having achieved over 25% procurement from MSMEs for the FY 2018-19.

The benefits being accorded by GRSE to MSEs can be summarised as:-

DKS:  GRSE has achieved a significant growth in its turnover in the past few years. What are the new systems in place? What steps did you take to improve productivity? What are the other measures being put in place to continue with the run?

CMD GRSE: GRSE is strategically placed as an institution of excellence and eminence in warship building. The Company has set a visionary target for the Value of Production (‘VoP’) increasing to three folds over the period of next five years.

In addition, we are focusing on the following growth strategies-to build GRSE into world-class facility:

DKS: How is GRSE involved in Security and Growth for All in the Region (SAGAR), a cause taken up by the Prime Minister of the country as well as the Capacity Building and Capability enhancement for the littorals in the IOR? Could you throw some light on it?

CMD GRSE: Recently the security of Indian Ocean Sea Lines of Communication (SLOCs) has become a key concern for stakeholders, but regional mechanisms for maritime security cooperation in the Indian Ocean are few.

Consequently, SLOC security has become an increasingly prominent component of India’s security outlook. The importance attached to SLOC security was first seen in India’s stated aspiration to become a “net security provider” in the region. In 2015, Prime Minister NarendraModi went public with his SAGAR (Security And Growth for All in the Region) strategy, for engagement with the Indian Ocean rim countries and islands. India must enlist other stakeholders’ cooperation in order through the development of a common understanding and comprehensive strategy to tackle the different types of security challenges in Indian Ocean Region.

Over last 59 years, GRSE has built 784 platforms which include 103 warships to Indian Navy, Indian Coast Guard & Government of Mauritius which is highest number of warships built & delivered by any shipyard in the country. From building 05 ton boats to 24600 ton Fleet Tanker, GRSE has done it all and has proved its mettle as a pioneer warship builder of the nation.

GRSE has a dedicated, multi-disciplinary, strong Design Team which is continuously working towards developing various concept designs for ships that can cater to the current and future requirement of Indian Navy and Indian Coast Guard.

In pursuance of GOI Policies, we are engaging with friendly foreign countries in Indian Ocean Region to support them in building Warships. Our Memorandum of Understanding withKhulna Shipyard, Bangladesh is an example. We are the first shipyard to have exported a warship from India – CGS Barracuda to Mauritius.

DKS:  How do you organise specialised training of your work force?

CMD GRSE: Over the years GRSE has developed the competency and capabilities of its human resources which has created a talent pool.Our rich shipbuilding experience makes us stand apart in the field of warship design and construction. The strategic focus of the Company has been to bring in contemporary HR Policies, Processes and Practices so as to constantly nurture and develop talent and build expertise. Value driven HR interventions viz. Leadership Capability Development, Succession Planning and Competency Mapping have contributed significantly to the business. Aligning HR to the requirement of People Capability Maturity Model is also being implemented. This initiative will provide a new direction to HR wherein competency based HR systems will be institutionalized. The various measures taken by HR have been recognized by way of GRSE bagging the ICC PSE Excellence Award for “Human Resource Management”. Our comprehensive Training & Development Manual released in December 2019 addresses all envisaged training needs.

GRSE will continue to implement innovative training solutions for upgrading knowledge, skills and attitude of all employees for qualitative improvement in performance. The Human Resource Development interventions will be integrated with business strategy and will be augmented to bridge the technical and behavioural competency gaps arising due to changing business scenario and latest trends in technology and management.

Since Skill development is one of the thrust areas of our CSR objective, the company will continue to do extensive work towards skill development in line with the Skill India Mission by facilitating vocational training for improving employability and entrepreneurship opportunities for the youth and to bridge the skill-gap.