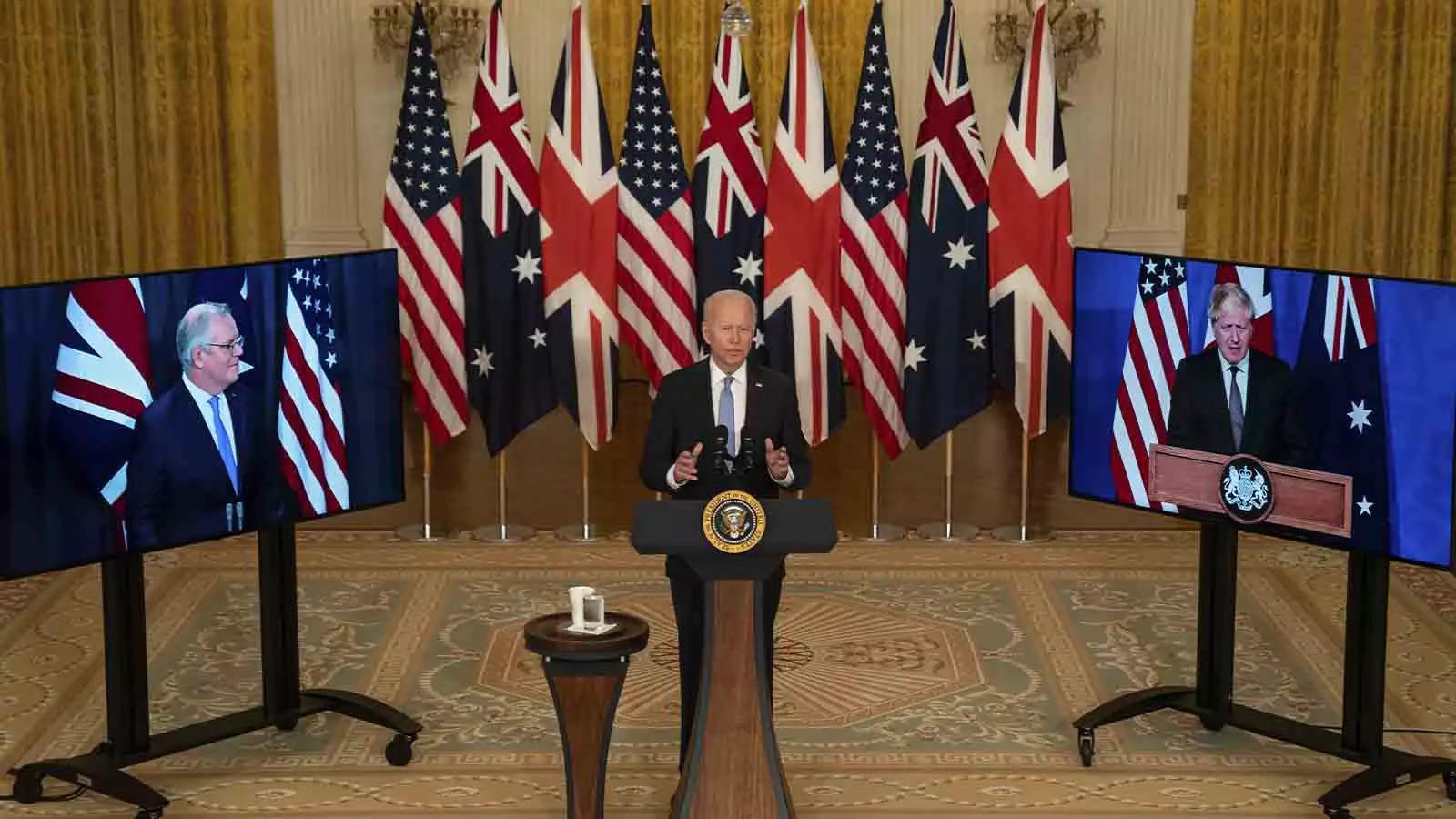 AUKUS took the world by surprise, including the Chinese. It rocks the post World War II security architectures and brings the Indo-Pacific region in the far greater focus of the Americans. If there’s one single reason that can claim primacy for the birth of AUKUS, it’s Xi Jinping’s aggressive belligerency. Has the once much-touted pivot to the east, materialised?

On 15 September 2021, the three Heads of State – Australia, the UK and the US announced the formation of a new alliance between the three countries called AUKUS. This strategic alliance encompassed mutual cooperation in cyber security, artificial intelligence, quantum technologies, undersea capabilities, and defence. The principal clause in this alliance is the manufacture of at least eight nuclear submarines in Australia in collaboration with the UK and the US. It is thus called both a strategic and a security pact.

The pact has ruffled many feathers across friends and foes of Australia, the UK and the US. The controversies and the implications of this deal have generated a lot of relevance for security architectures across the globe.

AUKUS came into being against a backdrop of multiple emerging geopolitical crises. The Corona pandemic has yet to loosen its grip on happenings that shape movement and free trade. The slowdown of economies across the world has hurt revenue earnings. In light of the pandemic, relations between China and Australia reached their worst phase, as Australia demanded a stricter inspection regime from WHO to get to the bottom of the origins of the Coronavirus. There are trade sanctions and freezing of diplomatic relations due to a malicious slinging match between the foreign offices of the two countries.

China has refused to ease its Military and Psychological forays into its neighbouring territories despite being on the backfoot. The crisis with Taiwan is gaining critical mass as the Chinese naval sea, and air forces violate Taiwanese airspace routinely. China’s aggressiveness in the South and the East China Sea has its neighbours looking for alliances to protect their interests. Japan, the Philippines, Vietnam and Indonesia are the principal spokesmen against Chinese adventurism. China has had a significant confrontation with India in Eastern Ladakh, which doesn’t seem to abate. China’s relations with the US haven’t improved despite a change in regime in the US. If anything, they have worsened with China threatening the US against any support to Taiwan.

Against this backdrop, Australia’s relations with China were further strained due to the pressure from the Chinese on Australia to distance itself from growing security and intelligence alliance with the US and UK. Australia thus found itself fighting with China on both the trade and the security front.

The strengthening of the QUAD with the US, Australia, Japan, and India made the four partners in a plurilateral arrangement look into Indo-Pacific issues. It is gaining momentum lately, becoming a loose military alliance with the Navies of these countries participating in naval cooperation exercises like the ‘Malabar’. Yet, both the QUAD and the Indo-Pacific alliances did not offer any concrete solution to the growing Chinese belligerence in the South China Sea.

Australia has limited military ambitions, confined to securing its territory, and this is reflected in its military inventory, which never looked menacing to its neighbours. In a bid to improve its sea denial capability, Australia had signed a contract with the French in 2016 to manufacture 12 diesel-powered submarines at the cost of 37 billion US dollars. Four years down the line, the Australians blamed the French for going slow in meeting the timelines as per the contract. There was much dissatisfaction amongst the Australian government officials with the progress of the submarine deal.

It is in this scenario that the AUKUS was born. It was a secret hidden even from the Australian public and the rest of the world, as its announcement took everyone by surprise. Principal in this deal was the announcement of the cancellation of the French submarine deal and its replacement by the manufacture of at least eight nuclear-powered submarines for the Australian Navy by the alliance partners. Australia has no nuclear power infrastructure to fuel its energy needs. Thus, the apparent connotation is the Australian dependence on the US and the UK to run the submarine program.

Second, ANZUS, a pact between Australia, New Zealand and the US, has been laid to rest. New Zealand is a known opponent of nuclear power, and thus they were not considered. Third, it comes as a big blow to France as Australia reneged on their 2016 contract. It doesn’t matter if the contract was not going as scheduled; it’s a “Stab in the back”, said the French Foreign Minister Jean-Yves Le Drian. Immediate retaliation was forthcoming from the French, who recalled their ambassadors from the US and Australia.

The deal was done to stalemate the Chinese growing presence and hostility in the East Asian region. China’s military is growing too fast for the US. While China was not named in the announcement, enough indications were available to understand the target nation. On expected lines, the Chinese have reacted with a strongly-worded statement by their foreign ministry spokesman Zhao Lijian who called this deal ‘extremely irresponsible’ and said “the three countries were in the grip of an ‘obsolete cold war zero-sum mentality and narrow-minded geopolitical concepts’ and should “respect regional people’s aspiration; otherwise they will only end up hurting their own interests.”

Through AUKUS, the US has thus ensured a threat will exist to the Chinese in the region. While the Australian Prime Minister has made a categoric announcement that submarines would not be nuclear-armed only nuclear powered. Though the danger of a nuclear conflict is potentially averted, yet, a nuclear power submarine is a potent weapon system because of its reach and stealth.

So, where does it leave France? The French are mighty upset as their 37 billion dollar US deal has been drowned in the South China Sea.  President Emanuel Macron made his displeasure known to all, including the US President and the Australians. Yet strange are the ways of diplomacy. Within a week of recalling the ambassadors, President Biden spoke with President Macron for 30 minutes on the phone, and the French were pacified. What transpired between the two Heads of State is unknown. A lot is left as conjecture.

It is believed that the American President may have apprised the French about the Chinese aspirations and the growing threat they pose to the world order. Possible promise in tackling the terrorist menace France faces in its backyard and some French colonies in Africa. Or, maybe even promised some trade deals. But what has been left unsaid is the implicit threat of boycotting French goods in the US like French wine and dairy products.

The last time France went against the US in 2003, during the Iraq war, it suffered from a goods boycott, American politicians called for. The formation of AUKUS is a fundamental shift in power blocks with both NATO and the EU out of favour with the Americans. UK has broken away from the EU, and NATO is no more the favourite security bloc. The focus has shifted, and the AUKUS is the new ‘Pivot of the East’. France is not a favoured entity in the Anglo-Saxon political sphere, for it is considered far too idealistic by the Americans. France has become an unreliable partner for the Anglophonic world in their quest to fight the belligerent Chinese.

The US prefers to partner with the UK instead, and thus its inclusion in the AUKUS.  The UK is the only country with whom the Americans have shared nuclear propulsion technology, and by extension of this treaty, Australia would be the second. Both France and Germany must have sensed the fault lines in the past strategic alliances as the EU is reduced to a regional trading bloc.

For Australia, the AUKUS deal has come as a blessing in disguise. With the Chinese military threat becoming a reality in the near future, the Australians were looking for a change in their security paradigm. The French submarine deal was not helping them reach it, and they were stuck without an alternative. In the backdrop of developments post-Corona pandemic and Joe Biden coming to power in the US, the back channels opened a pandora box for the Australian Steve Morrison’s government. Having the US and UK come with open arms to their rescue would be a dream come true for many of their previous Prime Ministers. The need to revisit its security requirements and national interest coincided with the offer. It was a welcome opportunity even at the cost of losing some freedom of operation and domestic opposition.

The pact envisages the construction of 8-10 nuclear submarines in Adelaide for the use of the Australian Navy. It is estimated that by 2040 Australia will have the entire fleet. The Chinese would fret, and fume but have themselves to blame. Making Australia their enemy was not a wise political move. Australia was a preferred destination for many Chinese students for higher studies. In a bid to exert its supremacy in the Pacific rim, the Chinese bungled their Australia policy. Adding one more enemy to its list, Xi Jinping is responsible for the formation of the AUKUS. As one observer in Australia has stated, the first Nuclear submarine once commissioned in the Australian Navy should be named ‘Xi Jinping’, as he is singularly responsible for helping Australia possess it.

AUKUS has managed to shift its security focus from Europe to Asia finally. It has been called the most significant military pact after NATO. China under Xi Jinping has been more assertive in the Indo Pacific region and exhibiting the newfound military might of its aircraft carriers and stealth bombers. The challenge to the US in South China Sea was open and direct. With AUKUS, the new cold war has just begun. It would be different from the previous one as China leaps to a technological upgrade of its armed forces. It has left President Biden with no choice but to act and checkmate Chinese ambitions in the region.