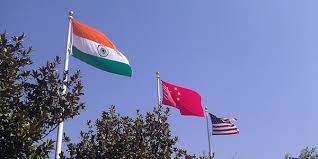 India’s growing participation in the QUAD as also its increased proximity to the US is being dubbed as India losing its strategic autonomy. India has also been blamed for making other forums, BRICS and SCO, of which China and Russia are members, ineffective. In an editorial last week, the Global Times stated, “With India moving closer to the US, as well as its own anti-China stance in recent years, it’s fair to say that BRICS and the SCO have fallen into stagnation since the Doklam standoff in 2017.” It is pertinent to flag that it’s only China, which is mentioning stagnation of these organizations; none else.

The same editorial added, “If it (India) goes further down this road, it will eventually lose strategic autonomy, completely become the US’ hatchet man against China in the Indo-Pacific region, or even cannon fodder.”

China has realised that Indo-US proximity as also the growing power of a rejuvenated QUAD would impact its grip over smaller nations in Asia. The fact which China chooses to miss is that India enhanced QUAD engagements only post the Chinese intrusion in Doklam. After the border incident in Ladakh, India realised ties with China can never be normal, and for it to ensure its security, China must be contained.

There have also been comments that Russia has been unhappy with growing Indian participation in the QUAD. The Russian foreign minister had termed the QUAD as an ‘anti-China game.’ India, on the other hand, visualizes the QUAD as a necessary counter to China and has repeatedly sought to allay Russian concerns. Russia had traditionally been a close ally and an arms supplier to India, an arena where it can still impact Indian defence preparedness by delaying the supply of crucial spares. However, for Russia, defence deals with India will remain central to its ties.

Economically, Russia is weak and hence, would prefer aligning with China as the US continues to enhance curbs on it. For the first time, in two decades, the Indo-Russian summit was postponed in December 2020, without any fresh dates being announced. While the pandemic was quoted as the cause, it’s more likely fallout of Russian displeasure at growing Indian proximity to the US and its enhanced participation in the QUAD. Russia has even talked of a Chinese-Russian military alliance. With Biden continuing to target Russia and China, this alliance will strengthen, adding to Indian concerns, while pleasing China.

The basic question is whether India was ever truly non-aligned? Non-alignment was always a myth. When India was in the Russian camp, it was firmly there, backing Russia at every step. It’s now being accused of being in the US camp. There is no doubt that there are no permanent friends or enemies in international relations, only enduring national interests. Foreign policy is aimed at pushing a nation’s self-interests. The armed forces provide the power required to drive a nation’s foreign policy.

In case, a change in camps furthers India’s core national interests, then so be it. For India, the China-Pakistan military alliance is its most critical security threat. India had historically distrusted the US as it was more inclined towards Pakistan, and hence remained with the Russians. The US support to Pakistan during the 1965 and 1971 wars, as also during the Soviet invasion of Afghanistan and subsequently during Operation Enduring Freedom had cast doubts on its intentions. It was always seeking to intervene in Kashmir, in favour of Pakistan. Russia was a safer bet and a stronger ally. Russia had inducted India into the SCO as a counterweight to China, while China inducted Pakistan as a counter to India. When Indo-China relations were on more even a keel, India kept the QUAD at a distance. However, the equations changed with Doklam.

In the past few decades, India witnessed a changed US approach. The US realised that it needs India as much as India needs US support. The US no longer seeks to intervene in Kashmir, continues to apply pressure on Pakistan, is willing to share technology and restricted military hardware with India. It has backed Indian interests in the UNSC when China has sought to push Pakistan’s case. In brief, the US is working with India to secure its national interests.

It was growing Chinese aggressiveness that compelled India to reconsider its options and seek to join groupings which have similar objectives. With a growing economy, India has moved ahead on the global stage. It is currently the destination global leaders rush to sign trade and military deals with. Nations, which sided with arch-rival Pakistan, have shifted camps and are currently aligned with India.

In the pandemic period, India’s support of nations has enhanced its image. While economically superior countries are hoarding vaccines for their population, India, as the manufacturer of 70 per cent of the world’s vaccines, is contributing to global health, in addition to caring for its people. It has challenged China and won the vaccine war.

India has always sought to maintain close diplomatic ties with different groups, including those who consider the other as an enemy or a competitor. India’s concurrent diplomatic ties with Iran; while pursuing strong relationships with US, Saudi Arabia and Israel (all of them consider Iran as an outcast), simultaneous proximity with Russia and the US as also Israel and Palestine are indicative of its diplomatic outreach and global acceptability. For India, SCO and BRICS are beyond just China. India’s relations with members of these organizations, other than China, have ensured the organization continues to move forward. The fact that India is unwilling to bend to Chinese demands of collaborating despite border tensions and ignoring the QUAD have hurt its ego.

India’s growth in the economic and military fields has ensured that it can no longer be pushed. It has the power to choose its grouping which furthers its national interests. It’s no longer dependent and can make its own choices. The path India is currently adopting has been steadily built over time. With a world divided between the US and China, India has to choose, and it has chosen wisely. Non-alignment is currently history and should remain in history books alone.