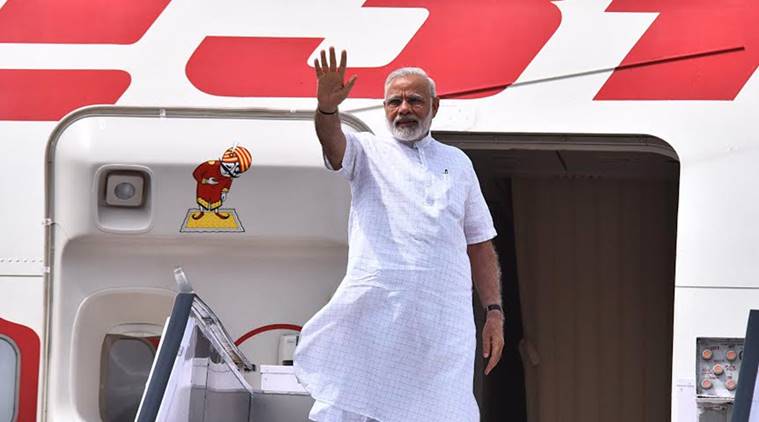 Israel-India Journey: 25 Years and Beyond

The Indian Prime Minister is scheduled to visit Palestine today; the first ever visit by an Indian Prime Minister. The visit comes in the backdrop of India – Israel relations being given a powered thrust by the Prime Ministers of both countries visiting each other’s capitals, recently. India has been able to maintain cordial relations with the Arab countries as also Israel, approaching each issue on a case-to-case basis. The author traces the steady progress Indo-Israeli relations have made notwithstanding their differences on seemingly implacable issues.

Israel – India Journey:  25 Years and beyond 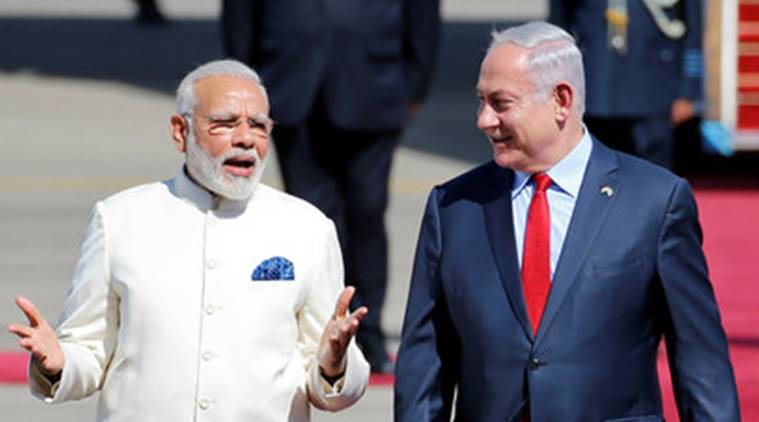 Although India had recognised Israel in 1948, the diplomatic relations were established only in 1992 under the Government of Prime Minister Narsimha Rao even though the bold stories of Israel’s offer to decimate Pakistan’s Kahuta nuclear facility,(if India permitted the refuelling to their fighter jets in Mumbai, which was not agreed to) continued to fascinate the public imagination. Moreover, Israeli adventurism, exceptional technological prowess and progress stories have created a significant pro-Israeli constituency at the grass root levels in India.

Similarly, an average Israeli holds India in high regards for its inclusive and diverse culture and ancient civilisation. Young recruits of the Israeli Defence Forces, after completing their strenuous training, prefer to spend months in India recuperating and healing through yoga, music, travel and Ayurveda. Besides, more than 80,000 Jews of Indian origin continue to excel and promote the Indian warmth and bonhomie in Israel.

Although during the past 25 years bilateral cooperation especially in agriculture, security and defence sector has continued to deepen, high level exchanges were few and far between due to India’s domestic compulsion of having the second largest Muslim population. The West Asia policy and wide ranging important relations with the Middle East countries especially in the Gulf Cooperation Council (GCC), where India’s real stakes are very high didn’t allow very visible warmth. 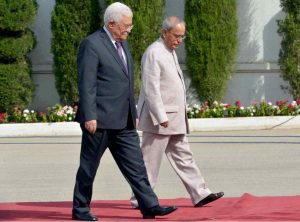 During the high octane periods of conflict and public posturing with regard to Palestinian issue it was pragmatic to weigh the pros and cons of any considered departure that could be termed blatant and potentially hurt India’s interests. This has changed especially since 2015 when former President Pranab Mukherjee paid the first Head of State level visit to the Jewish State after visiting Jordan and Palestine. It was the first visit to all the three countries by an Indian Head of State.

2017 is a special year for Indian diplomacy as both India and Israel celebrated the 25th anniversary of the establishment of diplomatic relations with the first ever visits by an Indian Prime Minister to Israel. Prime Minister Narendra Modi, who has an excellent personal rapport and chemistry with PM Netanyahu since his days as the Chief Minister of Gujrat when he also visited Tel Aviv, paid a state visit to Israel in July 2017 to an exceptional welcome by Bibi.They had agreed on several projects.

Before the visit of PM Netanyahu to India earlier this month, the Israeli Ambassador claimed that most of these projects agreed upon had effectively moved apace although some were pending with the Indian side. Amb Carmon wrote, “Innovation is interwoven into every field of India-Israel cooperation, but the field of innovation itself has also advanced since July. The Technological Innovation Fund created during Prime Minister Modi’s visit has been ratified by both our governments and a call for proposals has already been made.

The promised India-Israel Innovation Challenge has awarded 36 Indian and Israeli start-ups in agriculture, water and health with tools to boost their technology. All these projects were conceived in July and delivered in January. Israel India Innovation Fund (I4I) that PM Modi fondly calls ‘India 4 Israel’ or vice versa has become the mainstay of innovation and development.

PM Modi, during his visit, was once again able to see the immense technological advancement that the Jewish State had made with its resource constraints. Several of these could easily be adapted to Indian agriculture, water desalination, drip and arid -irrigation, water and health, start-ups, education space etc.

India and Israel have cooperated effectively in intelligence sharing, training, counter terrorism and cybersecurity. More importantly, in a short while, Israel has emerged as the 3rd biggest supplier of arms and equipment to India, closely trailing Russia and the US.

The relationship has moved on to strategic dimensions with significant mutual trust and respect for each other’s concerns and sensitivities. This does not obviate India taking independent positions or expressing its views on issues where it differs with Israel; a remarkable trait of Indian foreign policy. Iran and the Palestinian issues are the two such key issues. As far as Israel is concerned, it does not discount the possibility of having closer ties with Pakistan in future which is deemed by Indians as an anathema, or for that matter Israel’s endorsement of China’s Belt & Road Initiative that still irks India. Hence, the perceived and implicit national interests, domestic compulsions and continuity tend to dictate the positions and course of action. Differences have not prevented closest possible bilateral cooperation and engagement which is the case with India and Israel.

Over the years, India has de-hyphenated its stance hitherto predicated on Israeli- Arab- Palestinian emotional outbursts and takes a stance on a case-by-case basis as has been witnessed in its UN voting record. The fact that PM Modi made a solo trip to Israel without visiting Palestine before or after was of much concern for liberals in India and Arab watchers. The fact that he will be the first Indian Prime Minister to visit Palestine on February 9 this year will assuage the feelings of the Palestinians and will vindicate India’s decade’s long position on the issue of Palestine. As such, India provides huge assistance in capacity building and by way of budgetary support to Palestine.

In December, 2017 at the UNGA, India voted against the US resolution declaring Jerusalem as the capital of Israel that could have annoyed both President Trump and Bibi. On the other hand, India refused to condemn Israel on the most recent Gaza war or for that matter abstained on a UN vote against Israel. His visits to Palestine, UAE and Oman and the upcoming visit of President Rouhani to India are pointers to India’s diverse and concerted outreach that adds to India’s strength and credibility.

While balancing is the key, given India’s economic strength, objective and principled positions on international issues it has emerged as a credible interlocutor. Tomorrow, it may be called upon to perform this role as a regional power and it should be ready for it.

Prime Minister Benjamin Netanyahu visited India at the invitation of his dear friend on a six days long tour from 14 to19 January this year along with a 130 member strong business delegation that in itself was unusual but underlined that Israel values India as a major economic powerhouse and a huge growing market. Almost 15 years ago PM Sharon had visited India in 2003. 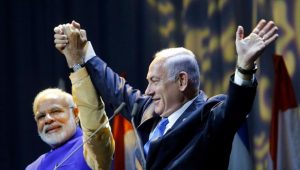 Welcoming Netanyahu, PM Modi tweeted “Welcome to India, my friend PM @Netanyahu! Your visit to India is historic and special. It will further cement the close friendship between our nations”. This was a response to the warmest welcome, words of gratitude, appreciation, personal indulgence and hospitality that Bibi had showered on PM Modi in last July. Shalom Namaste had become a buzz word during the visit.

During Netanyahu’s visit, he had called on the President and the PM. Nine agreements/ MoUs in areas of air transport, cooperation in oil & gas, cybersecurity, film co-production were signed.  PM Modi accompanied him and Mrs Netanyahu to Ahmadabad where a ten mile long Road Show of cultural heritage of India was displayed. He also inaugurated the Raisina Dialogue 2018 organised by Observer Research Foundation and Ministry of External Affairs apart from addressing the CEO’s Forum.

Bibi also inaugurated the ‘I create innovation hub’. In Mumbai he chanted,“Shalom Bollywood” and interacted with top Bollywood actors, producers and filmmakers asking them to shoot their films in Israel, even though the three Khans were prominent by their absence. Visa facilitation was also discussed apart from more flights and connectivity. Thus, the visit covered almost the whole gamut of bilateral relations and ways and means to enrich them further in the next quarter century.

The visit took place in a somewhat negative backdrop from the Israeli perspective. Just a few days ago India had voted at the UNGA against the US decision to declare Jerusalem as the capital of Israel. The US proposal quite obviously violated established red lines and India’s consistent policy on the issue of Palestine. Secondly, a US$ 500 million deal for purchase of anti-tank Spike missiles was cancelled which obviously did not go down well with the Israelis.

The issues were discussed and it is understood that the deal, even if partially, may be revived. On India’s vote in the UNGA, PM Netanyahu dismissed it as“One Vote does not decide the bilateral relationship” which is on a sound and trusted footing.

In fact, the Joint Statement articulated the way forward: ‘The two Prime Ministers discussed the developments pertaining to the Israeli-Palestinian Peace Process. They reaffirmed their support for an early resumption of peace talks between Israelis and Palestinians for arriving at a comprehensive negotiated solution on all outstanding issues, based on mutual recognition and effective security arrangements, for establishing a just and durable peace in the region.’

A profound relationship calls for maturely managing the differences. And that was done while exchanging views and positions on matters of bilateral, regional and global importance within the ambit of strategic partnership. It is a win-win partnership that is bound to take a higher trajectory over the years to come.

With the next 25 years horizon in mind the joint statement underscores, ‘The two Prime Ministers believe that durable and multifaceted cooperation is beneficial for the welfare of the people of both countries, and consider the next twenty-five years as an opportune time to strengthen bonds between the peoples of India and Israel through activities that enhance understanding and create opportunities for mutual progress. They agree to continue high level exchanges and to maintain dialogue in all areas, and to work in practical ways for the benefit of their people’.

Democratic Israel surely understands India’s importance being the largest democracy in the world and a benign economic powerhouse which PM Netanyahu summarised in his tweet:‘My first visit to India, a world power that is strengthening its relations with Israel. I am excited about this historic week that will further strengthen Israel’s international standing’.

Amb Anil Trigunayat is the former Indian Ambassador to Jordan, Libya and Malta