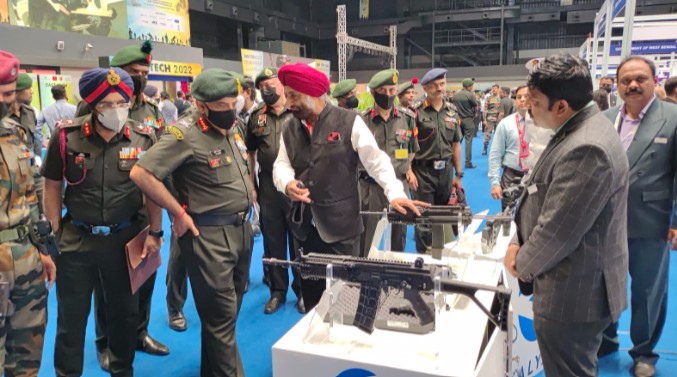 The first-ever defence technology exhibition – East Tech 2022 – kicked off in Kolkata on Thursday. The event was inaugurated by Lt Gen Rana Pratap Kalita, General Officer Commanding-in-Chief (GoC-in-C) of the Indian Army’s Eastern Command to identify cutting-edge technologies needed for solving operational challenges in the Eastern Theatre and the Indian Army as a whole. Over 200 Indian manufacturers, including many MSMEs and start-ups, display their products in a two-day event.

Garuda 105-V2 is a 105mm 37 Caliber Mobile Weapon System with 360° firing capability. It is an ultra-light weight gun system weighing under 5.5 ton created with state-of-the-art Hybrid Recoil Technology. The gun system is mounted on a 4 x 4 wheeled chassis that enables all terrain maneuverability, including high altitude areas. It is a go anywhere gun with a grade ability of 30°. Garuda 105-V2 has a coming into action time of 1.5 minutes during the day and 2 minutes at night. The system comes with a shoot and scoot capability, low maintenance cost and is adaptable for fitting into any service vehicle. It also has quicker emplacement, onboard fire control panel, and electrically controlled elevation and traverse.

ECARS is a 4 and 6 wheeled multi-terrain unmanned ground vehicle (UGV) designed to perform surveillance, security, safety, and rescue missions. ECARS is armed with enhanced collision avoidance system, and missions planning.  This UGV can be used with systems like RCWS, Water Jet machines and transportation of heavy material across border/water channels.

BHARAT 150, a multi-payload, variable mission drone indigenously developed by the industry group. The X-8 configuration drone is already under testing by the Indian Army in high altitude areas in Leh-Ladakh and performed well with 20 kg payload.

The drone is a vertical take-off and landing (VTOL) Unmanned Aerial Vehicle (UAS), with a maximum take-off weight of 150 kg and empty take-off weight of 58 kg. The craft comes integrated with an indigenously developed radio communication system and Inertial Navigation System (INS) with anti-jamming and anti-spoofing capabilities, making it operational in jamming and GPS-denied environment as well.

The drone’s batteries can give minimum 30 minutes of endurance with a communication link encryption (128 AES) for 50 km – 200 KM. The endurance can be enhanced as per the application.

The water and dust proof Bharat 150 can be used in the temperature range of -30°C to 65°C with an average speed of 50 km/h and a gust resistance of 15 m/s. It can operate at 1000 m above the take-off ground and is designed to work at 5500 m ASL. It’s autonomous and electronically stable design makes it suitable for application in Logistics, Search and Rescue, Signal Intelligence, Communication Intelligence, ISR, Loitering Munition for warhead dropping etc.

The Unmanned Aerial Vehicles is an autonomous, mechanically, and electronically stabilized drone. It has a Short Take off range of 10 meters. The drone is fail-safe with a Parachute Recovery system available. Its applications include surveillance and mapping, small package delivery (up to 5kg) for long distance, and Search and Rescue.

The Kalyani high performance sound system/warning device is made using advanced technology for mobile application with clear and intelligible announcement. The device is capable of directing acoustic energy with a narrow beam and a good front to back ratio with the continuous output of 130 dB+ sound pressure level. It is a modern solution constructed in an ultra-compact array format with an integrated MP3 player/recorder, internal USB mass storage memory, PTT-microphone and DSP power amplifiers. The device is capable of being operated with 100-240 V AC input power or from a separate 12/24 V battery powered high performance loud-speaker system.

It is serviceable in all terrains, portable, easy to carry in a backpack and is endowed with excellent speech intelligibility at a distance of 50 to 1000 metres. Its unique safety feature protects users during commissioning and health risks caused by excessive noise. The device comes with a long-term service and support to ensure that system continues in operation for entire life cycle.

The T-5000M rifle is a multi-purpose weapon, providing high-accuracy long shots of upto 1500m distance. It has a battle proven platform to meet the needs of modern military forces. The rifle has an interchangeable spare barrel, a bracket to mount pre-sighting lens cap, a monopod, and a tactical fore end. Its specialty includes cutting of 5R grooves and a twist rate change within the recommended limits.

The Advance Carbine is designed and developed by the ARDE and manufactured by the Kalyani Group. The 5.56 x 45 mm Carbine is a lightweight, compact, effective weapon used in close combat CI/CT operations. It is developed to meet the requirements of the Law enforcement forces and Indian Defence forces in close quarter. The Advance Carbine weapon is being developed and manufactured for the DRDO.

Superior Ergonomics and reliability make it a great all-around performer. Its small frame, lightweight and reliability makes S7/S5 an excellent pistol to carry. The pistol has a hammer forged barrel with a calibre of 9mm/.45ACP. It also has an ambidextrous magazine release, accessory rail, and steel three-dot sights.

Kalyani Group has supplied more than 2 million ready to fill shells to Ordnance Factories and DRDO in the range of 70 to155mm covering all variants including HE, smoke, illuminating and incendiary.

120mm FSAPDS Mark II is a DRDO designed prime ammunition for the indigenously developed 120 mm Arhun Tank. It is the first time in India that a Private Sector Company was entrusted with and has successfully manufactured this ammunition.

The Dual Technology Mine Detector (DTMD) is a state-of-the-art ultra-sensitive detector for mines and IEDs using ground penetrating radar and metal detector manufactured in India with German collaboration. It is incorporated with Audio-visual feedback for operator. This device is currently in service with the Indian Army.