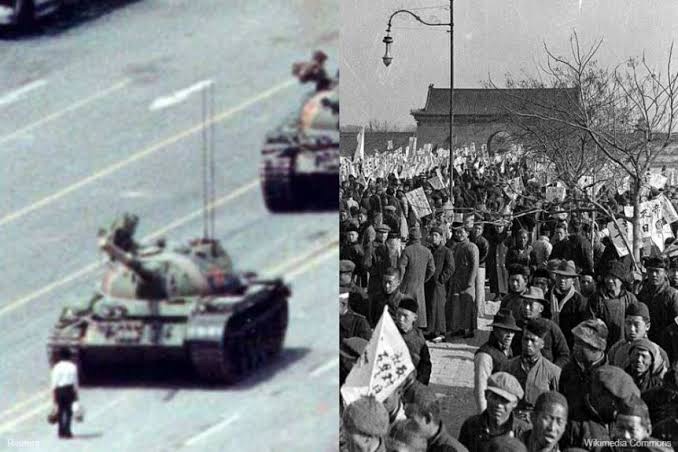 “The Communist Party of China took two lessons from the Beijing’s Tiananmen Square incident – first, political openness has to be stopped by all means and guarding the party’s ideology was must even if it pursued with economic openings. The second lesson was to preserve the supremacy of Communist Party in China at all cost which they still pursue as they believed that the West, the US in particular, were determined to stop the Communist Party’s further march to power,” observed former Foreign Secretary Vijay Gokhale during an interview with the StratNews Global while sharing his experiences of the student uprising on the occasion of 31st anniversary of the incident that took place on 4th June 1989. The observation sums up the Party’s extraordinary vice-like grip over China for seven decades.

However, the 70 years since the ruling Communist Party of China (CCP) took the reins have seen China swing between being a beacon of economic transformation and aggressive confrontations (both internal and external). A careful analysis of seminal events in recent Chinese history reveals a startling pattern, one linear and the other an inward spiral of periodical mass uprisings. Mapping the timelines of these uprisings reveals a surprising trend, based on which one may even make a somewhat interesting posit. Let us map these patterns to contextualize in terms of what lies ahead for the Party.

Mapping the Uprisings Against Communist Rule

China is one of the cradles of ancient civilization and has made significant contributions to the onward march of humanity. The Silk Road, an ancient trading route to Europe, exported Chinese inventions such as gunpowder, paper, fireworks and silk to the rest of humanity for many centuries. The Chinese people, resilient and hard-working, sought to co-exist peacefully with their neighbours and friends, till the CCP came to power in 1949.

The Chinese people, wronged by centuries of humiliation by colonial powers, rightfully took over the ownership of their State and started on an arduous journey. Being the anointed guardians of the resurgent Chinese nation, the CCP was given the onerous task of leading the Chinese people.

The CCP led by Mao Zedong founded the People’s Republic of China in 1949. Astonishingly, looking back now, there is a clear pattern of aggression every decade ever since. The victory of the Communists over the Nationalists in 1949 was built on the sacrifice of nearly 6 million ordinary Chinese and separation of Taiwan as a democratic counterpoise to Communist China. In 1959, the Mao launched the Great Leap Forward which resulted in the death of 30 million Chinese as also the Tibetan Rebellion in Lhasa was crushed by the CCP with nearly 100,000 deaths. It is noteworthy to recall the motive behind the 1962 Sino-Indo war – it was CCP’s way of diverting attention from the failure of its Great Leap Forward programme as described by Swedish journalist Bertil Lintner in his seminal book – ‘China’s India War’ published in 2018.

Moving ahead by another 10 years, 1969 witnessed the end of the Cultural Revolution, during which it is estimated that many millions lost their lives. In 1979, the CCP introduced the One Child Policy, a draconian measure to control population growth, which has caused tremendous social stress. 1989 witnessed the Tiananmen Square Protest which rocked the CCP and nearly led to their downfall.

By 1999, the CCP had completed 50 years of rule in China and the Chinese Embassy Bombing in Belgrade, the capital of erstwhile Yugoslavia by NATO jets took place under suspicious circumstances. Another 10 years later in 2008-09, the Tibetan Unrest rocked the CCP in the run-up to the Beijing Olympics. The year 2019 needs no elaboration for that is the year that the CCP gave us the Chinese virus.

Another historical pattern that strikes is the downward spiraling pattern of CCP’s aggression against its own people. Taiwan, Hong Kong, Tibetans, Uighurs Muslims of Xinjiang and liberal Chinese have been suffering under the iron yoke of the CCP – as exemplified by the hammer and sickle of the CCP’s flag – and enforced by the CCP’s People’s Liberation Army (the Chinese Army belongs to the People’s Party CCP and not to the People i.e. China – the Nation). However, free will cannot be held in indefinite suspension and the valiant people of China have risen against the CCP time and again.

After the CCP came to power in 1949, the Chinese people first rose in a mass protest against the CCP after 40 years in 1989. The next time this occurred was after 20 more years in 2008-09 during the Tibetan Unrest. Another 10 years further we are witnessing a wave of discontent against the CCP due to mishandling of the 2019 Chinese virus. Based on this downward spiraling of events, the next wave of protests could be predicted to be in 2024, 2027 and finally spiral down to an inflection point in 2029, where the CCPs luck may finally run out, exactly 80 years after the CCP seized power over the Chinese people. 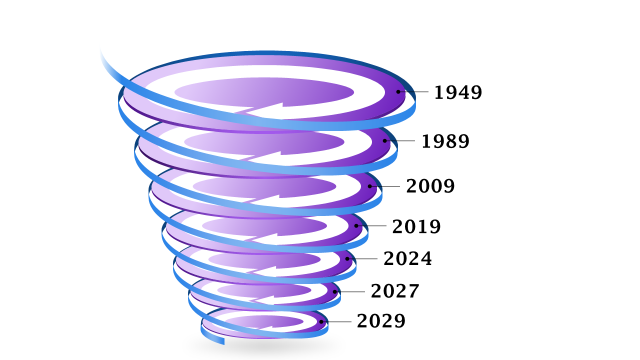 Figure: Downward Spiral of the CCP

Based on historical trends, the CCPs behaviour is seen to follow a curious pattern. Aggressive behaviour spikes approximately every decade while the common citizens of China are rising up against misrule in a pattern which should start worrying the CCP. The Dragon has had a patchy run in the last 70 years, making economic gains at the cost of deprivation of basic humanity to its citizens. Perhaps the Dragon will look back and see that its tail is on fire before it is consumed by the all-consuming flames of a future revolution in 2029.

China’s credibility hit by miles globally – a body blow for the presumptive superpower. China’s growth model is in doldrums as the global supply chains have started drifting away from the country. The miscalculation of bringing the whole world to its knee through the coronavirus has robbed China of its moral high ground of leading the world in the near future.

The ongoing India-China border conflict in the western sector at LAC is a CCP ploy to divert the world attention from the virus pandemic culpability. It’s a revisit of the 1962 moment for China to wriggle out of its own web if it turns otherwise.