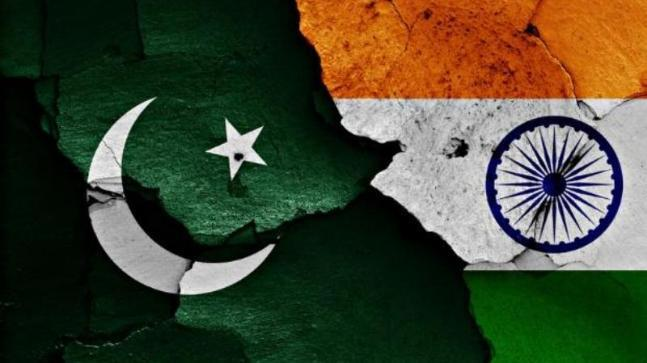 Pakistan is in a High Strung State and its Deep State is on high alert. The Pakistani Prime Minister feels that Indian mischief is possible before the elections.  Even the heat and dust of the Indian election juggernaut is keeping Pakistan on its toes and bleeding its economy! High Strung. That’s the current mood in Pakistan. Opinions in leading dailies create and reinforce this mood. It is a Jekyll and Hyde story. On one hand they know the reality of their nation and the dangers it’s facing. On the other hand, they extol the Deep State in defending a virtuous Pakistan from an aggressive India. The relevant issue is that the opinions expressed by these intellectuals are the sum of Pakistani fears and vulnerabilities. There is a need to act on these in a planned manner.

Grand announcements were made to get rid of the terrorist organizations under the National Action Plan. Some Pakistanis welcomed it. “The one positive result of the latest spell of tension in relations with India is the beginning of action against the already proscribed militant outfits that should have accompanied the launch of the National Action Plan in 2014, if not earlier”. Some remained skeptical “Crackdown on extremist groups. Offices and bank accounts sealed. Madressahs and clinics run by the charitable arms of militant organisations taken over… But the cynic in me sounds a warning note: we’ve been here before. Déjà-vu. Grabbing the suspects is the easy part as they have been free to roam around in public despite being on several terrorist lists. The hard part is to try and sentence them. And the toughest bit is to drain the swamp of the extremist venom that has poisoned the public discourse”.

After the initial action, there is absolutely no news regarding follow up action. Not a single report. No discussion. Nothing. The familiar deception and ‘cosmetic preventive strategy’ is unfolding. India must monitor this closely. Prevent the Pakistani Houdini act during the FATF review. 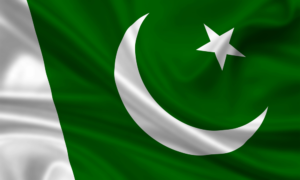 Pakistan coalesces and rallies around the Deep State at the slightest hint of the imaginary existential from India. They have nowhere else to go. The nation believes that their Armed Forces have saved the day by bettering India post-Balakot. However, there is also an opinion that “Pakistan is in a strategic bind, regardless of its greatly applauded tactical brilliance in the recent challenge imposed by the Indian aggression”. Familiar story. Brilliant Generals losing the strategic plot. The lesson for us. Do not lose the strategic plot. It does not matter if the world opines that the IAF operation at Balakot was a tactical failure or if the PAF is seen to have bettered IAF in the air skirmish or if Imran Khan came through as the better statesman in returning our Pilot. Stay the strategic course.

Pakistan uses Nuclear Coercion strategically. Pakistani opinion makers reinforce this strategy by expressing views like – “The possibility that two nuclear powers could actually engage in war is a terrifying prospect that could no more be ignored and rang alarm bells globally…however, conventional superiority of India and significant disparity between the two countries in sustaining a major conflict economically could push Pakistan towards crossing over the nuclear threshold”  or “while extolling the value of nuclear weapons as a deterrent to external aggression, the hazards of possessing them must not be ignored”.  However, Balakot, as per Ashley Tellis “represents the erosion of a major psychological barrier—namely India’s reluctance to frontally challenge Pakistan’s nuclear coercion—and opens the door to future punitive actions that may be far more painful than those witnessed in this initial salvo”. At a macro level, strategic communication to Pakistanis must convey that their strategy of nuclear coercion cum state-sponsored terrorism has expired.

Many in India argue that Surgical Strikes have not changed Pakistani strategic behaviour. I disagree. Consider this Pakistani view. “A surgical strike imposes no additional costs on the aggressor while the cost of the preparedness the victim country must maintain is quite substantial”. This is profound. Surgical strikes impose a penalty on Pakistan – Shifting of terror camps, international focus, internal churn, economic cost, psychological effect on Pakistanis, dislocation of support to separatists’. When repeated in different forms, there will be an effect that will contribute to a degradation of the Deep State. Surgical strikes must be thought through with back up plans. Chest thumping exercises are detrimental to the overall cause.  Restraint is the keyword. 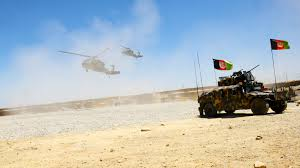 Pashtuns on either side of the Durand Line dictate that Afghanistan will be an internal as well as an external challenge for Pakistan. Pakistan has always been part of the Afghanistan problem and not its solution. However, the Deep State is once again seeking strategic space in Afghanistan. The festering wound will go septic for Pakistan. Intelligent Pakistanis opine that – “the war we know may end but the conflict will continue… The Taliban are a problem, not the solution…. Pakistan may yet again be saddled with an abandoned war whose complexity it cannot resolve…. Pakistan-US differences have been permanent and agreements temporary”.  So, the portents are clear. Unstable Afghanistan. Unstable Pakistan. US presence will fray the Pakistan-US relations further. Put India, Iran and China into the cauldron. Rough times ahead. There is also an opinion that in such a situation, “even CPEC will remain a pipe dream”. India’s role in Afghanistan this time around will be larger, and it will create problems for Pakistan. It cannot get clearer.

In India, there is no clarity on the IWT as a weapon. The Pakistanis are however very clear about it. This view clarifies issues involved – “Pakistan’s argument about the insignificance of water quantities is misplaced. Pakistan, on an average, receives about 3.5 MAF for the Kharif and a little less than 1 MAF for Rabi seasons in the Ravi and almost 2 MAF in Kharif and 0.5 for Rabi season in the Sutlej. This water is absolutely important for groundwater recharging, particularly the one received in Rabi — the non-monsoon period. Let’s also not forget that Beas, Ravi, and Sutlej rivers at times receive much higher quantities of water at Marala, Madhopur, and Ferozepur stations where the incoming water is first measured in Pakistan. The rapid decline of groundwater in Lahore, for example, is often attributed among other reasons, to the drying of the Ravi. These meagre quantities are also needed for off-season flushing of heavy metals and persistent organic pollutants. In fact, the peak discharges in these rivers have been significantly higher and their contribution to overall water availability to the Indus basin system should not be ignored”. Hence an agricultural assessment and focused investment into the Ravi-Satluj basin can alter the balance and play havoc in Pakistani. Add the requirement of water for their coal-fired thermal power projects of CPEC. IWT is a low threshold high payout option and a low hanging fruit.

The current Pakistani thought process on Kashmir runs like this “Pakistan of today cannot really do much more than it is doing already. The only way it can help the Kashmiris peacefully is through dialogue. But India does not want to talk. Instead, it is tempted to put a vulnerable Pakistan on the defensive and off balance”.  “India’s attempts at isolating Pakistan and keeping it off balance limits its diplomacy on Kashmir”. “By appearing to use militancy as an instrument of policy, we were becoming isolated in the community of nations. Even those who feebly support the Kashmir cause are critical of the unconcealed presence of an array of jihadi groups in Pakistan”.  Pakistanis face a dilemma as to how to go ahead with their unfinished K-agenda. They must recalibrate their modus operandi and press the restart button. That gives us time and opportunity to set our house in order.  Till such time Pakistan is on the defensive and off balance, they cannot do much in Kashmir. Keep it that way.

“Pakistan is facing an economic crisis and the previous governments’ disastrous policies have indebted the country for generations to come”. This view sums up the bleak economic landscape of Pakistan. The interesting part is that “Pakistan’s weak economy totally disproportionate to its military muscle undermines its ability to absorb economic shocks or sustain long-term conflict”.  Let us granulate this further to see what the actuality is. 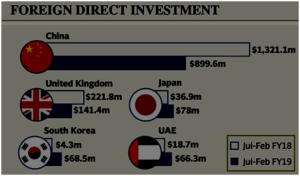 FDI into Pakistan is down by 23% in the current FY. (See chart below) Surprisingly FDI from China is down by 32%! Essentially since some CPEC projects are completed and new ones are yet to start. In the current scenario, one must see when new CPEC projects commence. They might not take off in a hurry. No free lunches from China or Saudi Arabia. Only high-interest loans. The inevitable IMF bailout requires the support of major global powers who are fed up of Pakistani double dealings and support of the Jihad Factory. In any case, the IMF will ensure that CPEC loans are not paid off from its bailout. The Financial Action Task Force scrutiny is on. That’s a lot of uncertainty. Resultantly, FDI will further decline. The overall scenario is very bleak.

Pakistan is surely and speedily heading into a debt trap. The net debt of Pakistan in percentage terms of GDP based on a Pakistani analysis is tabulated below. Debt has risen at a rate of approximately 2% of GDP per annum. If this rate continues; in 11 years their debt will be equal to the GDP. It will occur sooner if the balance of CPEC loans materialises.  Pakistan faces an economic meltdown if the IMF bailout does not happen. If the bailout does happen, they would be put on a tight leash.

The Military Aspects of the Economy

Militarily, the pot must be kept boiling on a slow burner. Do not let Pakistan disengage. Increase own defence expenditure. Force Pakistan to spend more on defence and squeeze its social economy. Simultaneously, target the Deep State to discredit it. Pakistanis must be made aware that their military has skimmed the top and has made them pay a heavy long-term price in the past which will continue in future. As per a report “rise in military spending, today means less money to educate our children, invest in our infrastructure, support our police and courts and do all the other things that we can do to correct our economic decline“. The truth is that Pakistan will fail economically because of the extractive nature of the Army. The Army has kept the country poor, prevented economic growth and grow rich. It must be communicated to Pakistanis that India poses no existential threat to Pakistan. India has learnt to see far beyond Pakistan. The real existential threat to Pakistan is the Army which has kept itself rich while constantly depriving the common Pakistani of fundamental necessities including his basic security.

The foregoing discourse tells us that India needs a counter terrorism doctrine. It can no more be an incident and reaction scenario. The doctrine must encompass intelligence gathering, proactive offensive options and important defensive measures and operating procedures to minimize losses. It must address the internal and external dimensions along various lines of action.  Ambiguity, threshold definition, response patterns and national synergy must be built in. it should be made clear to Pakistan that their meddling will have direct repercussions on them. A holistic approach as outlined in my earlier articles must be adopted. It must reinforce the sum of Pakistani Fears and exploit its vulnerabilities.