The author expresses the apprehension that while tangible challenges that the Indian Navy’s new Chief of Naval Staff faces are issues that often find great focus, intangibles often do not receive the attention that is required. Thus, while equipment and technology induction are often planned for, nurturing leadership development, integrity and pride in the Navy of the men and women who form the rank and file need also to prioritised, equally.

There is a disquieting Indian tendency to view challenges solely in the tangible plane and to avoid discussing the far more complex realm of intangible-challenges. This is a mistake that is likely to prove to be increasingly unaffordable for an Indian Navy that seeks to establish and sustain a favourable geopolitical position for the Republic of India. 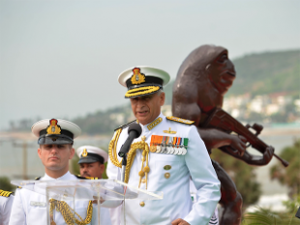 With Admiral Sunil Lanba’s assumption of command as the 23rd Chief of the Naval Staff (CNS) on the last day of May this year, the Indian Navy once again stands poised upon the edge of new and exciting opportunities. More often than not, of course, opportunities come garbed as challenges. Consequently, in identifying these challenges, it’s possible to reveal the underlying opportunities and seize them to the nation’s advantage.

Admiral Lanba has inherited a navy that is undoubtedly impressive, but one that is, nevertheless, struggling to match the range and pace of its growth with those of the country’s maritime interests. Manifestations of this challenge can, of course, be seen in terms of gaps in capacity (i.e., material wherewithal by way of ships, submarines, aircraft, cyber-space and outer-space assets, etc.). However, the in-your-face nature of these capacity-indicators notwithstanding, an equally pressing naval challenge lies in the conceptual plane — viz., answering the question of what exactly the Indian Navy intends to do in varying environmental conditions of peace, tension and conflict, in order to preserve, promote, pursue, and protect each of India’s maritime interests. This process will generate a set of specific naval objectives that must be attained in each of the above-mentioned environmental conditions. The plans for such attainment guide the formulation and execution of focussed force-planning, operational-planning, manpower-planning (especially training), maintenance-planning, and, op-logistic planning. It is not necessary for these individual contingency-based plans to be made public, but the naval challenge, nevertheless is to ensure that these plans are specifically geared to stated naval objectives and are continuously updated and refined.

The naval leadership must constantly strive-to remove scepticism and reinforce faith — and it must be seen to be doing so. The undiluted commitment of the leadership to the honour and wellbeing of the navy’s serving and veteran cadres must be an article of faith that is not open to question. This requires the skilful exploitation of multiple channels-of-communication — itself a significant challenge. The civilian defence-bureaucracy must never be allowed to be painted as a callous, uncaring, self-serving, obdurate, adversarial and a cartelised group that is arrayed against the uniformed Navy. Yet, simultaneously, the uniformed leadership must never allow itself to be misperceived as being morally or functionally powerless, or complicit in any action or attempted action that is detrimental to the honour and wellbeing of the men and women who have reposed their blind trust and faith in it.

There still are several admirable stalwarts, both in uniform and in the civilian bureaucracy, who practice the Chetwode Code in their daily lives. They need to stand up and be counted. The sacredness of the unspoken compact that binds the leaders and the led at every hierarchical level must always be evident in both, action and perception. Thus, the constant reinforcement of ‘institutional’ faith, integrity, belongingness and morale; the strengthening of horizontal and vertical honour, pride, and a value-based ethos; and the nurturing of élan and ésprit-de-corps amongst naval uniformed and civilian personnel, especially in the face of media-sensationalism, public ignorance, insidious character assassination and innuendo-filled attacks are ‘challenges’ with which the Navy’s leadership must wrestle.

Closely affiliated to concepts of worthiness and pride is a fine sense of ‘honour’. ‘Honour’ as an abstract concept entails a perceived quality of worthiness and respectability that affects social standing and self-evaluation — both at the individual level and the collective one. Of the several senses in which Dr Samuel Johnson defined ‘honour’, while penning his 1755 classic “A Dictionary of the English Language”, that most relevant to Indian naval leadership is the one that relates to the “nobility of soul, magnanimity and a scorn of meanness”. Since in the navy, individuals are assigned worth and stature based on the harmony of their actions with a specific code of honour, there is a clear need to institutionalise the systematic study of the notion of honour. How this should best be done remains a serious challenge to navies the world over. Given the crisis of leadership that the country is in, the Indian Naval leadership can hardly do better than to promote both, ‘horizontal’ and ‘vertical’ honour. Horizontal honour is the right to respect among an exclusive society of equals and is premised upon a code of honour, which stipulates the minimum standards that must be reached in order for a person to receive respect within a group and also specifies behaviour by which honour might be lost. The permeation of ‘horizontal’ honour requires the existence of a tightly-knit, aspirational and inspirational ‘Honour Group’ that consists of individuals who understand and have committed to live the code of honour.

The Navy’s officer corps constitutes such a group. ‘Vertical’ honour, on the other hand, is competitive and hierarchical. However, for vertical honour to exist, horizontal honour must first be present. In other words, without a baseline of mutual respect among peers (horizontal honour), winning praise and esteem (vertical honour) means very little. In the final analysis, honour is the quality of knowing and doing what is morally right. Emphasising this and making sure that the rank and field absorb it into their central belief-system is the challenge.

Integrity is at the core of leadership and simply means that what you say institutionally and what you do individually are matched. You walk the talk. This is a genuine challenge for the contemporary naval leadership — as, indeed, it has been for past leaders and will be for future ones, too. Sound leadership and integrity are indivisible and the challenge for any naval leadership will always be to demonstrate this on a day-to-day basis. Leadership is not about rank, privilege or perquisite. Leadership is about the well-being of the led…. the well-being of the country. The country’s honour, the leader’s honour, and, the honour of the led, cannot be differentiated from one another. 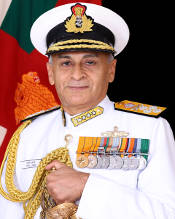 Whenever the naval rank and file look to their leadership, they must be reassured — and inspired — by bold, confident and largely transparent steps that they discern are being taken to assert the Indian Navy’s commitment to nation. Thus, active encouragement of the navy’s characteristic dynamism — of exuberance and enthusiasm amongst its officer corps are major challenges in the contemporary naval milieu. The ‘College of Admirals’ that Admiral Lanba heads cannot continue “….letting ‘I dare not’ wait upon ‘I would’, like the poor cat i’ th’ adage.” (The adage is that while the cat wants to eat the fish in the water, it is not willing to wet its paws!) Their challenge is to ‘institutionally’ refuse to equate discipline and obedience with the suffocating, stultifying absence of exuberance and, instead, to actively encourage that audacity of thought, boldness of speech, and daringness of action, which together make the Indian Navy a force to be reckoned with.

In this age of technologically-enabled back-seat driving, the continuous repudiation of the gospel of risk-aversion, tepid and conformist thinking and, above all, silence, are intangible challenges to which the Navy must rise. This can only be a top-down process. The senior hierarchy of the Navy need to make it clear in explicit and implicit terms, through constant precept and consistent example, that ‘risk-taking’ — not foolishly but calculatedly — is a quality that is not only desirable, but essential to the Navy’s fundamental ethos as a fighting service. Likewise, the Navy must not isolate itself from the intellectual and economic renaissance taking place in the country in terms of both, the manufacturing and services industries. The apex-level leadership must positively encourage its uniformed personnel to proactively participate in think-tank discussions — not merely those funded directly or indirectly by the government, but privately-funded/organised ones as well. Senior naval officers must (by ‘fiat’, if necessary) attend as many professional lectures, round-table discussions, symposia and summits as possible. Re-establishing the Navy’s career-based confidence and restoring the breadth of its awareness and knowledge-base is a challenge whose importance can hardly be over-emphasised.

At the point of maximum convergence between the intangible navy and the tangible one, the Navy’s Executive Branch must shoulder the responsibility of driving the navy’s technical acumen in accordance with specific warfighting needs. Each year, several very bright naval officers of the technical branches of the Indian Navy are sent to our IITs to attain an MTech degree in one or another discipline. It is critical that their areas of applied-research be guided by warfighting needs.

These officers need to be tasked — by admirals of the Executive Branch — to execute a time-sensitive plan of researching cutting-edge electro-magnetic applications such as Electro Maganetic Aircraft Launching Systems or ‘Rail Gun’ technology, so as to be able to absorb this technology from, say, the USA. Likewise is the case with the acoustic silencing of outboard motors (OBMs), or the development of high-speed but silent electrical OBMs, or computer-controlled semi-submersible attack craft, or paper-batteries and nanotechnology applications that will enable hand-launched UAVs to attain extended time-of-flight and/or enhanced all-up-weight capacities — all of which are critical elements of special operations. The list seems endless. However, ducking these challenges by concentrating solely upon tangibles would be mindless.

He retired as Commandant of the Indian Naval Academy at Ezhimala. An alumnus of the prestigious National Defence College. In his seagoing career, he has commanded Indian Navy’s frontline surface-combatants on four occasions and has been principal director in the Directorate of Naval Operations at Naval Headquarters, New Delhi.