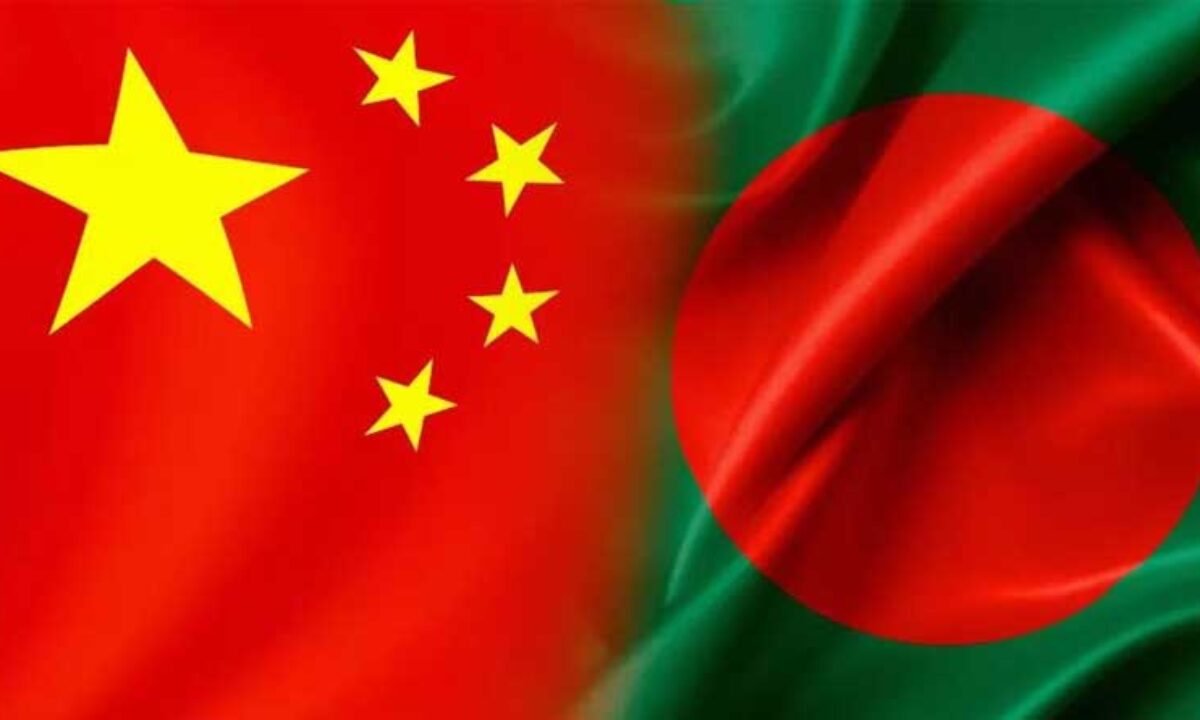 China views the Quad as an essentially anti-Chinese congregation of four countries that can decisively contest its ambitions in the Indian Ocean Region. With Quad grouping joined by more countries in the region often discussed, perhaps China decided to warn the world from abstaining from such a move through a rather threatening statement by Li Jiming, Chinese Ambassador to Bangladesh against doing so. The article examines the Chinese threat, Bangladesh’s response and the increasingly tenuous geopolitics of the region.

Bangladesh poor third world country once, and ignominiously, at one stage, referred to as a ‘basket case’ is one of the fastest-growing economies in Asia today. Bangladesh’s per capita income has surpassed India’s, and it’s a global leader in readymade garment exports. With a demographically young population of over 160 million and an impressive human developmental record, Bangladesh now has been reckoning as a country with potential.

The Uncharacteristic Chinese Statement which made the World Sit Up

On 12 May 2021, Li Jiming, Chinese Ambassador to Bangladesh, surprised the world apart from ruffling Bangladeshi feathers with an uncharacteristically aggressive statement. It warned Bangladesh that China-Bangladesh bilateral relations would be “substantially damaged” if Bangladesh joined the Quad – the USA, Japan, Australia, India grouping.

On April 27, the Chinese Minister of Defence Wei Fenghe urged Bangladesh’s President, Prime Minister, and Chief of General Staff, not to join the US-led Quad. A day after Ambassador Li Jiming’s warning, a top Bangladeshi official called the comments unwelcome, saying that Bangladesh will respond to any proposal from any sources in line with its own foreign policy. The Bangladesh Foreign Minister AK Abdul Momen told local English daily Dhaka Post that, “None of us was invited to the Quad”. He added, “China is talking about the issue in advance over the US-led four-nation security alliance Quad. No decision has yet been made about the Quad, and Bangladesh will decide on it as an independent, sovereign country.”

However, it is unlikely that the Chinese Ambassador would have resorted to such assertive remarks without knowing some credible inputs about it. Moreover, the news that Bangladesh invited to join the Quad may not be groundless either; Bangladesh could have sent feelers to Quad members or deliberately raised this bogie to check international, regional and China’s reaction. There is also a strong possibility that China may be messaging the world, especially nations in the Indo-Pacific region, forewarning any such moves.

Beijing has been openly critical of the Quad as an “exclusive clique” reminiscent of “cold war politics” being led by the US in an attempt to contain China. The Quad agenda is driven by the US Indo-Pacific Strategy (IPS) which not only ropes in Japan, India and Australia but also intends to woo other countries, including ASEAN members, and South Asian countries such as Nepal and Sri Lanka. China feels that Quad does not respect the global multilateral international system with the UN at the core but promotes a US-centred world order. Therefore, if Bangladesh joins the Quad, it will be taken advantage of by India, the US and others.

China views the Quad through a ‘security prism’ with a vision to counter the BRI and slow/stall China’s inexorable growth. On the other hand, Bangladesh is an important ally, considering it is a multi-directional pathway to the IOR, Myanmar, ASEAN and China. Bangladesh has tended to play the two big neighbours China and India opportunistically to gain maximum geopolitical and economic leverages.

While China-Bangladesh relations have blossomed, China perceives that her substantial all-around investment in Bangladesh has been pivotal in the latter’s remarkable economic growth. She further assumes that given Bangladesh’s geostrategic importance in the Indian Ocean Region, her adversaries, mainly the USA and India, are trying to drive a wedge between the two countries. China has accused the USA of hyping the ‘debt trap’ theory concerning Bangladesh, which is patently false.

India sees Bangladesh as an important country in China’s so-called string of pearls strategy, which poses a threat to India. The Chinese fear that apart from endangering the BRI grid, Quad will undermine the 21st Century Maritime Silk Road, and the Bangladesh-China-India-Myanmar Economic Corridor (BCIM) which incidentally is already experiencing uncertainties given the tensions between India and China, and Myanmar’s internal instability.

China keeps emphasising to all its allies that their partnership is economic and with no geopolitical strings attached. The Chinese government and media after Li Jiaming’s warning categorically emphasised that China does not intend to bring Bangladesh into its ”sphere of influence”.

The US had got Bangladesh on its geopolitical radar since its turn-around. The US Deputy Secretary of State Stephan Biegun visited Bangladesh in October 2020, had stated that the US looks at Bangladesh as a key partner in its Indo-Pacific Strategy (IPS).

Regarding the warning of the Chinese Ambassador, the US State Department’s Spokesperson, Ned Price stated “we have taken note of that statement from the PRC (People’s Republic of China) … what we would say is that we respect Bangladesh’s sovereignty and its right to make foreign policy decisions for itself”, and “when it comes to the Quad, we have said this before… it’s an informal, essential, multilateral mechanism that right now convenes like-minded democracies, to coordinate in the Indo-Pacific and fundamentally to push forward our goal of a free and open Indo-Pacific region”.

Dhaka views the Indo-Pacific purely from an economic perspective and is also contemplating coming out with a strategy for the region. Being located in the Bay of Bengal area, Bangladesh wants to be part of the blue economy and is interested in all Indo-Pacific developments. Momen, in an earlier interview, had said, “for us, being part of any security alliance as such is difficult because we believe in non-aligned policies and we would like to keep it that way.”

One of the primary reasons to join BRI was the promise of China to provide the US $24 billion for the development of infrastructure in the country. The IPS and Quad would have helped Bangladesh secure additional funds for developmental work, enhanced connectivity and strengthen economic ties, with countries within the Indo-Pacific.

The US is the single largest export destination and the second biggest investor for developmental activities in Bangladesh. The IPS and unexpectedly rapid coalescing of Quad have placed Bangladesh in a spot. Therefore, Bangladesh faces a challenge in balancing its geo-politico-diplomatic-economic relations between the US, China and India, especially since China-India relations have taken a nose dive transforming into an adversarial relationship.

China has not been squeamish while interfering in India’s strategic backyard, which is very demonstrably against India’s strategic and security interests. The geo-political-economic advantages of having a friendly aligned Bangladesh as a fellow member of ‘Quad Plus’ is obvious and is not being elaborated upon. The security dividend will be significant. India and Bangladesh can jointly exploit the opportunities generated from the steady restructuring of regional and global trade and investment relationships, reducing dependence on China. A stable neighbourhood and strengthening of India-Bangladesh ties reinforce internal stability and catalyses India’s ‘Look and Act East Policy’ with Bangladesh being a huge beneficiary.

Why are the Chinese rattled or worried?

As China and the US increasingly compete for influence, Bangladesh’s induction in the Quad framework would signal its firm alignments with India and the United States. Beijing is deeply unsettled that a “Quad plus Bangladesh” would challenge China’s strategic outreach in South Asia and act as a catalyst for a new trend in the region by effectively enabling the Quad’s expansion.

Bangladesh is well aware that Chinese aid and loans are designed to expand Beijing’s influence and tilt the regional power balance, thereby casting a shadow over historically-rooted ties with India. India’s opposition to the BRI, rapidly emerging details of China’s “debt trap” diplomacy under the BRI initiative, (neighbour Sri Lanka’s Hambantota experience has raised alarm within their polity, people and media), have made Dhaka wary and more cautious about its relationship with Beijing.

Bangladesh has also emerged as a major focus on India-Japan third country cooperation. With the future of BCIM imperilled, Japan’s Expanded Partnership for Quality Infrastructure (EPQI) has grown with Tokyo becoming a pivotal development partner of both South Asian and Southeast Asian states. Japan has also implemented an “India-plus approach” towards South Asia, building on the robust India-Japan partnership. Bangladesh is seen as the “intersection between India and ASEAN”.

While Bangladesh is undoubtedly emerging as an important player in South Asia with an enlarging strategic influence, it is not critical for China to dominate South Asia, IOR and the Indo-Pacific. China’s warning to Bangladesh is a signal that China is now confidently asserting her global role and is sending a strong message that she will not take kindly to any nation joining an adversarial camp and there will be a price to pay!

With the economy plateauing, its internal dissensions, debilitating demography and sudden rise of convergence of democratic forces opposing post-COVID, China need all the allies it can garner like Bangladesh to achieve Xi Jinping’s ‘China Dream’ which is slowly appearing more like a chimera.