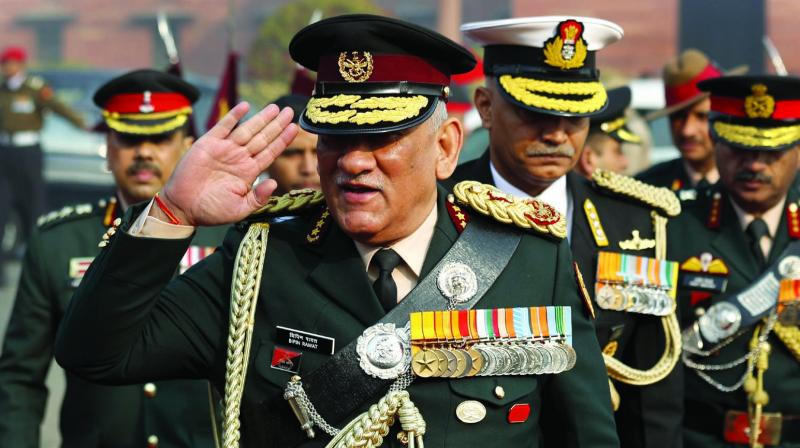 The CDS has been nominated. General Bipin Rawat has a new baton in his hand and a far-reaching mandate that needs to be pushed at a fair pace. He has to ensure that the organisational structures to be evolved are in place in the next two to three years and are functionally efficient not too long, thereafter. The services have also to ensure that the transitions do not affect operational efficiencies and the changeover is smooth.

Some of the major organisational issues include theDepartment of Military Affairs. It will be led by the CDS, who will also be attending meetings of other secretaries of the Government. However, this issue does not quite lower his status. His status will be the equivalent of the Cabinet Secretary.

The Department of Military Affairs will have officers of the IAS and include some officers currently tenanting appointments in the Ministry of Defence. The cross-pollination will hopefully settle down soon enough for the restructuring of Command HQs to progress smoothly.

Foremost among the tasks ahead are the creation of joint/ theatre commands. The thought processes for restructuring are gradually gaining clarity and will require to be finally put to paper, war-gamed and finalised. However, the likely pattern that could evolve is a mix of theatre and functional commands.

The raising of an Air Defence Command is the first step already mooted. Apparently, all air defence assets other than those of the strike corps of the army and those that are meant for the tactical battle areas, essentially short-range systems, will be brought under this command. A crucial issue in the air defence battle is the speed and accuracy of information flow. The Air Defence Command will enhance such capabilities and give it more teeth. The command is likely to be headed by the Air Force. It could be located at Prayagraj (Allahabad). The Air Force Central command is currently located in the city and considerable infrastructural assets are available.

The other command that is being thought about is a Logistics Command, possibly at Nagpur. The command is likely to be headed by the Air Force which already has its Maintenance Command at Nagpur. Logistics is an area where jointness has huge scope. Common logistics nodes can serve all three forces located in their areas.

The first theatre command we can expect is a Peninsular Command that could combine the Navy’s Eastern and Western Commands. In all probability, the Army’s amphibious assets and the Air Force’s Southern Command will be subsumed in this organisation. The Navy is likely to be the lead player. The existing Andaman and Nicobar Command is likely to be permanently led by the Navy.

The other theatre commands being thought of including a command that will look after the entire Indo-Tibet border region. Thus, the Army’s current Eastern Command, parts of Central and Northern Commands will form part of this establishment with its HQ at Lucknow. Currently, the Army’s Central Command is at Lucknow. Since this command is definitely in response to a land-threat based approach, the best contender for being the lead player is undoubtedly the Army. This command will include the Shillong based Eastern Air Command and parts of the Western Air Command based at Delhi.

With Pakistan being a threat in the continuum, the entire balance of Northern Command, to include areas from Siachin glacier to further west and south across Ladakh, Jammu and Kashmir and the plains of Punjab, currently under the Western Command, will come under the jurisdiction of this command. The command is likely to be led by the army.

Further south, in the desert sector, the current area of South Western and parts of Southern Command will merge to form another Theatre Command with possibly Air Force in the lead. The deserts provide the Army with the opportunity of deeper penetration and the Air Force has a huge role to play in the integrated battle likely to develop should a deep penetration option be pursued.

The other thought process in the corridors is a joint Training Command. It will bring together the three services in this crucial area for joint manship. All three services will retain their lien on establishments that are service-specific. After all, no great purpose will be served if the basic training of soldiers at the Army’s regimental centres is also looked into by a Joint command. Basic training will remain the responsibility of the service concerned. This command will reorient officer training to align the officers better to the requirements of joint operations.

The Strategic Forces Command will function under the CDS for administrative purposes. New agencies like Cyber and Space will also be with the CDS.

These changes are likely to be progressed simultaneously with a certain degree inter-say prioritisation. The armed forces are expected to better optimise the fielding of their resources as the transition progresses.

The CDS will be the principal Military Advisor to the Defence Minister, without diluting the advisory roles of the three Chiefs who will retain their advisory roles on service-specific issues. The CDS will also be the Military Adviser to the Nuclear Command Authority. The government will thus have a single point of advice on military matters from a military professional.