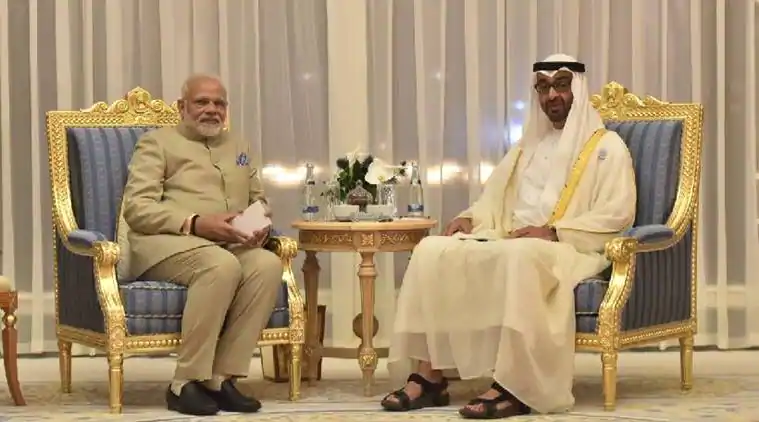 The India-UAE relationship has traversed a long path to be today called as perhaps India’s most dependable strategic partnership in the Gulf region. Both parties have been applying themselves to building a relationship with dexterity and sensitivity. Differences between the two countries have not been allowed to progress the relationship in other areas. The author provides a comprehensive account of the current dimensions of the relationship. 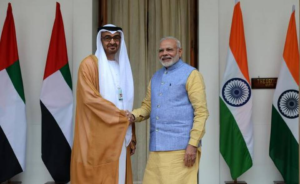 Under the current dispensation at Delhi, India-UAE ties have witnessed a new level of synergy and cooperation. Since May 2014, the United Arab Emirates (UAE) has emerged as India’s ‘most preferred partner’ in the Gulf region. This is largely because of the pragmatic foreign policy outlook towards the Gulf region based on the policy of ‘Look West’ under the Modi government.  In the last five years, both countries have strengthened cooperation in areas like economy, trade and investment, energy, defence and security, space research and counter-terrorism. The recent award of UAE’s highest civilian honour ‘Zayed Medal’ to Prime Minister (PM) Modi highlights the growing importance of Indo-UAE ties.

Diplomacy, which combines fine balancing of frequent high-level visits, summit meetings, personal bonhomie with the leaders and efforts to seize new areas of cooperation has not just allowed India a meaningful role and position in the global politics but also widened its outreach towards the Gulf region. This includes its growing cooperation with countries like UAE, Iran, Saudi Arabia, Bahrain, Iraq, Egypt, Oman, Qatar and Israel. The region, which holds key energy reserves, is of strategic significance to India.  And based on a five-factor policy: the safety of expatriates, securing of energy resources, attracting investments, expanding counter-terror partnership and increasing connectivity, West Asia has emerged as a ‘key outreach region’.

Historically speaking, the bilateral ties between India and the Gulf region have a ‘civilizational context’ going back to the era of exchanges between Indus Valley and Mesopotamian civilisations. The two states remain ‘natural business partners’ given their ancient spice and pearl trade.

The new boast to Indo-UAE ties was given during the historic visit of PM Modi to Abu Dhabi in August 2015. This was the first ever by an Indian PM in the last 35 years, which underlined the new shift and focus to strengthen bilateral relations.

It was followed by inviting Crown Prince Al Nahyan to be the Chief Guest at India’s Republic Day celebrations in January 2017. These steps marked a ‘new change and orientation’, sending a strong message of solidarity and connect with the UAE. 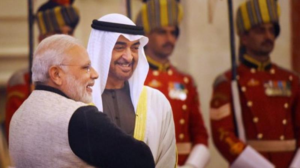 In the past few years, as many as ‘four high levels’ visits have taken place between both the countries led by Crown Prince Zayed Al Nahan and PM Modi. Over the years, both sides had strengthened mutual ties with each other. Other key meetings between ministers and officials based in New Delhi and Abu Dhabi followed up this ‘new shift’ in Indo-UAE ties. The growing economic profile backed by India’s increasing global influence also influences these developments.

Wider economic cooperation remains the key area of interest in the newly found resonance of Indo-UAE ties.  It remains necessary because UAE is not only the largest trading partner for India but also India’s second largest export destination in West Asia.

Both countries have reiterated their commitment to advance cooperation in developmental projects in Africa and also for increased investment from the UAE in India. Under ‘Make in India and Invest India’ policy initiatives, India has sought investment from UAE in areas like railways, roads, ports, airports, industrial corridors and parks. Pursuant to this, the Abu Dhabi Investment Authority (ADIA) became the first institutional investor in India’s National Investment and Infrastructure Fund (NIIF), with an estimated investment of US $1 billion.

Towards cooperation in financial services and industry, an MoU has been signed between Bombay Stock Exchange and Abu Dhabi Securities Exchange (ADSE). Both parties also agreed to set up an office of the Confederation of Indian Industry (CII) in Dubai and of Dubai Chambers of Commerce in Mumbai to steer cooperation in trade and investment. To keep up the momentum, both the states have reiterated to increase the bilateral trade to $100 billion by 2020. 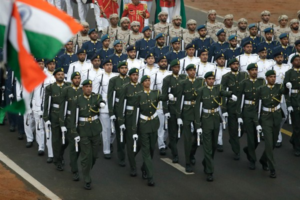 Security and defence cooperation is another major area, which has added a new dimension to this relationship.  The two key visits by the then Indian Defence Minister Manohar Pariakkar (May 2016) and of India’s Naval Chief (February 2017) set the pace for enhancing defence and maritime security cooperation between India and UAE. Moreover, both the states have pushed cooperation in identified fields of defence manufacturing, technology, joint studies and research, innovation, and cooperation between public and private institutions. They also renewed their joint defence cooperation agreement in 2014 and conducted their first joint naval exercise in 2018.

In addition, both nations have steadily progressed their cooperation against terrorism. A reflection of such cooperation was UAE’s strong and immediate condemnation of Pulwama terror attacks in India.

On the energy front, during the visit of the Crown Prince to India (February 2018) both states signed MoU awarding 10 per cent stakes to Indian oil companies as an offshore oil concession. In June 2018, both signed a trilateral energy cooperation framework agreement signed by ADNOC and Saudi Aramco to invest in the development of Ratnagiri Refinery and Petrochemicals in Maharashtra at of cost of 44 billion US dollar.

During the visit by the Crown Prince of UAE to India in 2017, a new framework of cooperation between India and UAE was established. Now, more state-led cooperation between India and UAE is being formulated, led by the visits of Chief Ministers of Andhra Pradesh, Haryana, Kerala, and Jharkhand to UAE. These visits were preceded by visits of business delegations from Gujarat, Maharashtra and Telangana.  Keeping in view the huge number of Indian expatriates in UAE, both the countries signed MoU for cooperation in manpower and labour management with provisions on contractual employment, collaborative administration and awareness amongst contractual workers.

The Dubai based EMAAR group is likely to invest in India’s food processing industry covering states like Maharashtra, Madhya Pradesh and Gujarat.  An agreement has been signed to establish a multi-modal logistics hub in Jammu and Kashmir.  In addition, both counties have reiterated their commitment to cooperate in remote sensing, joint space research and navigation services.

Under the present NDA regime led by PM Narendra Modi, the India-UAE ties have reached new levels of friendship and understanding making a shift from business cooperation to a new era of Comprehensive Strategic Partnership. As the relationship between both the states unfolds, the diversifying economic cooperation, fight against extremism, broadening energy sector engagement, increased civil society engagement and common positions to mitigate global challenges shall remain the hallmark of this transformation.

Considering the new strategic dimensions of this relationship, the highest civilian award to PM Modi by the UAE government speaks of its desire to further strengthen bilateral cooperation with India.

Abhishek Pratap Singh holds PhD in China Studies from the Centre for East Asian Studies (CEAS), SIS, JNU, New Delhi. He was recipient of Junior Research Fellowship (JRF) from UGC, Govt. of India (GoI) for his higher studies and was also nominated for ‘India Youth Delegation, 2016’ to China by GoI. He was granted Indian Council of Social Science Research (ICSSR) research grant for his field trip to China in 2017 during which he visited many Chinese Universities in places like Beijing, Shanghai, Shenzhen, Wuhan and Chengdu.