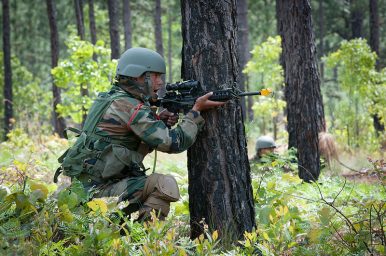 The inexplicably vexed issue of our serious dependence on imported armaments right from a soldier’s veritable limb—his rifle–to tanks and fighter aircraft, has been always of interest and a cause for frustration. Her, the author analyses some of the confused rationale regarding selection of calibre for an assault rifle, the weakness of quantitative analyses infirmities in knowledge of ordnance and ammunition, as well as lackadaisical R&D even in the matter of small arms and small calibre ammunition.

“The Man with the Gun…Determines Who Wins…”

It might be proper to begin this piece with the very sensible and powerful words of Admiral JC Wylie’s writing in the mid 1960s, “The ultimate determinant in war is the man on the scene with the gun. This man is the final power in war. He is control. He determines who wins…This is the soldier.” Far from being a flippant observation in Wylie’s book, ‘Military Strategy: A General Theory of Power Control’ (1967, p 72), it is an important maxim. Yet, in a very literal sense, India has not been able to provide its soldier a reliable, effective and indigenous rifle. The reasons for this sorry situation are many. Some are actually misconceptions about calibre, and a few that are perhaps due to failings in our own calibre.

“To Injure is Better, to Kill Facile!”: A Flawed Premise

In a recent India Today report (Sandeep Unnithan, 31 July 17) there is a mention that 1982 GSQRs stipulated a transition of calibre from 7.62mm to 5.56mm was needed so that the enemy would be wounded rather than be killed. This would result in tying down more of his compatriots in helping him, and make him a burden, etc. Whether this thinking was actually part of GSQRs is not known. It would be a pity if it were factually so. Nonetheless, it is still a widely held belief at many levels not only in the Army but in other services as well. That it has no statistical basis or historical/ experiential foundations has received little attention at least in the media.

On average, in combat, about one soldier dies for about 8-10 injured. As Col Dupuy’s painstaking study (Understanding War: History & Theory of Combat, 1987) shows, the ratios for navies and air forces are quite different in combat with the proportion of killed generally higher than those wounded for obvious reasons. In any case, even when soldiers tried to kill the enemy, they actually wounded more than they killed. Further, many wounded managed to fight on until injured further; succumbing to their wounds or being killed in subsequent moments. The saga of the Indian soldier’s ability to fight on despite taking hits is well-known. The enemy could be similar.

If The Fallacy of “Thou Shalt not Kill” Were Right?

The supposition, if once considered by the Army were right, begs follow-on questions. First, did this lead to a major change in marksmanship and rifle-range training all across the Army, but especially in the Infantry? Were there penalties on target scoring for hitting where chances of achieving a kill were greater than causing injury? Did the parameters for intra battalion and other “bread and butter” marksmanship contests at larger unit/ formation levels reflect the changed ideas of GSQRs?

Related, did infantry tactical doctrines, exercises and debriefs incorporate this new direction? Was there any evidence that tactical doctrines in other armies (but specifically for us in those of our neighbours) reflected this line of thinking? Had any other Army subscribed to the flawed premise of aiming to injure than kill? Conversely, was their tactical level mission dictated by priority to help the wounded at the expense of the objective? This is important because if the suggestion of GSQRs is true, then it would be effective only if the enemy thought so.

This writer’s discussions and analysis over some years suggest that there were no downstream changes on account of these supposed GSQRs. Our soldiers shot to kill as a tactical imperative. Yes, there are traces of this incorrect premise (“To injure is vital; to kill, facile”) in some places as personal opinions. Elsewhere, an Americanism has been used to describe it is “barracks room” chatter, no more.

Larger the Calibre, “Deader” the Other Soldier

Overall, there is merit in the move towards a larger calibre from the 5.56mm bullet. As said above, the need to shoot- to- injure ought never have been part of the rationale either for hotter conflicts or in counter- insurgency/ counter- terrorist situations. Yet, the reasons why almost all armies/ marines changed to 5.56mm (.223in) in the years after WW II were largely valid. Most infantry/ mechanised infantry assaults took place at average ranges of about 200- 300m. At that range, as a result of lesser recoil and greater muzzle velocity, the smaller calibre was more effective than 7.62mm (.303/.308).

At greater ranges, (above 600m approx) however, the drop in projectile velocity of the 5.56mm was such that the residual velocity of 7.62mm was higher. These situations were compensated by having MMGs/ HMGs, snipers, infantry fighting vehicles, tanks and even helicopter gunships in combined arms situations. Further, at the predominant fighting ranges, the tendency of the 5.56 bullet to tumble on impact resulted in deeper wounds. We may keep in mind that, in any case, injuries outnumber immediate kills. So, it was better that the wound was deeper using a smaller calibre than by the larger 7.62mm at these ranges. 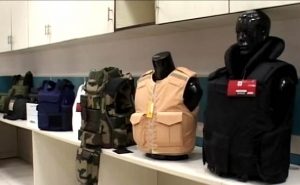 With advances in materials for body armour, a protected soldier-target in the field or in urban terrain is more ubiquitous. Obviously, a higher calibre round might have greater penetration than a smaller. Nonetheless, this relationship is not linear and much depends on the specific characteristics of the bullet- rifle combination and on the level of training of the soldier. This last point, i.e., the soldier’s skills, is as vital as the others and should never be taken for granted. (As John Boyd said, the order in which effectiveness in war matters is usually People, Ideas, Things.)

There is another material factor. Given the improvements in aim- enhancement hardware like range-finders, laser pointers, and vision-enhanced sights, as well as networking between engaged troops themselves, accurate engagements at longer ranges are now more commonly feasible. The possibility of scoring a first-round kill with a 7.62mm round can now be made higher than ever before. In fact, in terms of doctrine, training and exercising, all this should be tactically strived for.

These changes also have a related advantage. A body of troops can now be more dispersed but able to coordinate as well as concentrate firepower. At the same time, it is quite possible that an enemy, capable of asymmetry or superiority, would also be similarly advantaged. Here, factors like better training, leadership, aggressiveness, and hardware could overcome disadvantages of numbers, relative terrain, etc. Other than hardware, the Indian Army has the stuff required.

The Matter of an All- Dancing Solution.

On the basis of logic, logistics, overall costs, and efficiency, it is difficult to understand how could the case for a rifle with inter-changeable barrels gather so much momentum? If media accounts over some years have some basis (and there is reason to believe it is so—the latest being TOI, 19 Aug 17, such “solutions” set us back on at least four counts. The first is that the answers to a unit changing its rifle calibre from one to the other depending on warfighting role to CI/CT role lies in simpler administrative and logistics measures of sector stores. The second, really serious matter is that it postpones a decision on an acquisition programme due to such “overambitious experiments” to repeat Rajat Pandit’s polite phrase. According to Unnithan, it took from 2011-2015 to “RIP” this proposal. Third, and even more unfortunate, is that it sets back well-meaning attempts to design and productionise Indian arms. Fourth, it apparently meant that “injure, don’t kill” policy stood from 1982 to Apr 2016, when the Army Commanders conferred and rescinded it.

Unnithan quotes an Army officer saying, “…our operational requirements have changed, leading to the revised operational philosophy of ‘shoot to kill’”. If this were indeed the case, then does it imply that for 34 years our Army philosophy, quite literally, was “Thou shalt not kill?” Did this translate into tactical and training changes? Why were we so weak on quantitative analyses, ballistics knowledge, technical expertise on fire arms and ammunition as a widespread attribute? Of course, these are rhetorical questions but do suggest that some things were simply off the mark to overall detriment.

But, We Wish to be “Valued Customers” as Importers

As highlighted in an earlier series of articles, our lack of “swavalamban” (self- sufficiency) especially in the vital area of ordnance, it is particularly worrying to see that yet more imports (always desperately “urgent”!) appear as the fait accompli solution. Compare this with efforts in other large armies (and marines, etc.) to have something in hand they trusted for several years and which went through modifications to adapt to newer sights; grenade launchers, etc.

The M16 was the first mass-produced 5.56mm assault rifle. Feedback from troops in Vietnam resulted in overcoming the considerable glitches resulting in the M16A1 and others that followed during the war itself. Could our Army have made much greater effort in improving the INSAS 5.56 to its satisfaction? Its lack of quality is not disputed, but could it not have been made better? Likewise, while OFB deserves blame, it is our own Indian edifice as much as we who have worn the uniform are and hence deserves our active involvement, active hands-on critique and the ordnance and firearm expertise that a professional Army provides towards indigenisation.

Is there adequate support and involvement in the OFB’s effort to develop an indigenous assault rifle firing the 7.62/51mm or another compatible bullet? What research impetus is the Army providing to developing more effective 5.56mm cartridges like the Americans did with the M855s for their M16 and M4 series?

With an improved F-INSAS, and the older ones, there could be some conservation of costs even while development of an Indian 7.62mm goes ahead. What R&D and efforts from the Army, private sector and DRDO as well as OFB are required in areas like polymer- cased bullets; intermediate calibre like the 6.5mm; breakthroughs in case-less cartridges; polymer-based magazines; more composites into weapon parts? What is the road map for small arms exports which is a sure area where there would be markets to be supported and valuable partners, not merely “customers” to be gained? What are the plans for aiming systems and sights, target designation; or new simulators that train at advanced engagement ranges?

Through indigenisation, not only is there money to be saved, there is money to be made via exports. And, at the end of the day, a good, reliable family of Indian weapons and bullets would any day be better than the perfect imports no matter from where. Indigenisation results in “Baahubali”; but import-dependent armies cannot become “Armstrong”! This truth goes well beyond the nuances of language. Ultimately, to paraphrase Mao, more power will flow from an Indian gun than an imported one. We should make it happen!